To say that Crackdown 3 had a tumultuous development cycle would be a huge understatement. Announced all the way back in 2014, the game was poised to be one of the Xbox One’s killer apps, only to get delayed. It was an even bigger shame when the game was slated to release on the same day as the Xbox One X, only to finally get released in February of 2019. The sad thing is that despite all that extra time, Crackdown 3 is still a major letdown. 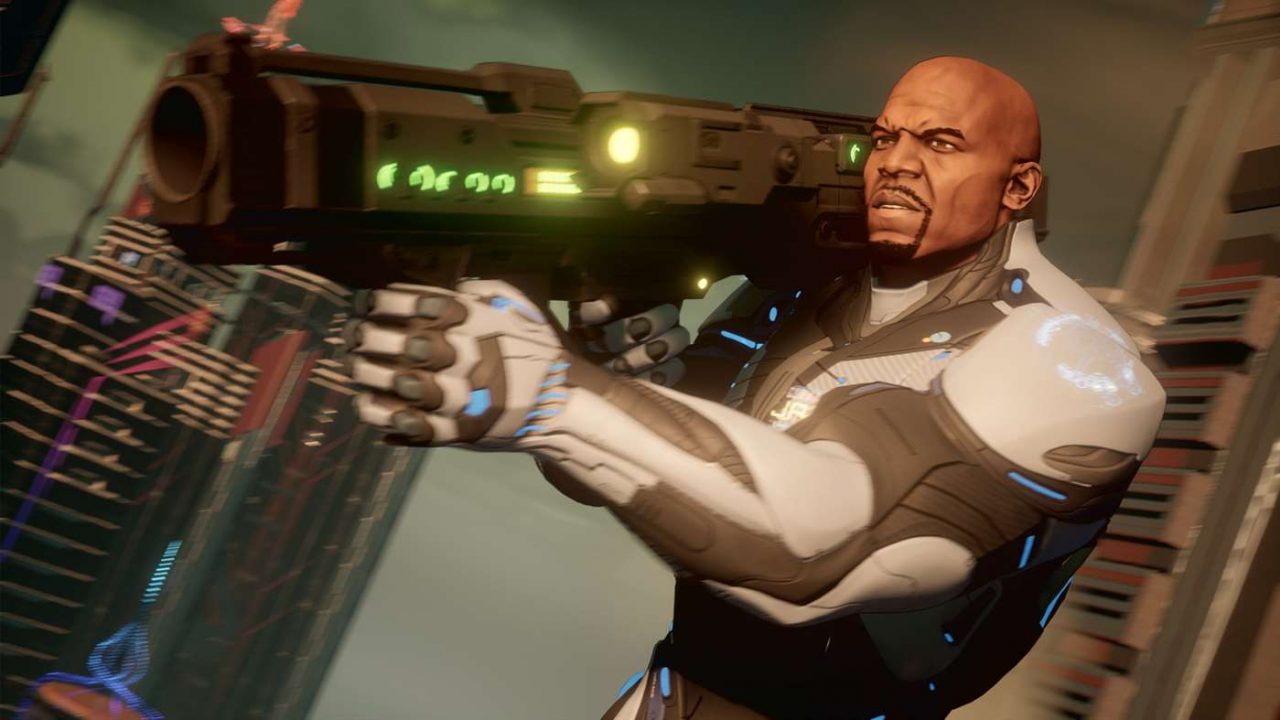 One of the key selling points in the story department was the stunt casting of actor Terry Crews. He plays Commander Jaxon, an over-the-top leader of a ragtag team of Agents. However, one mission goes awry and Jaxon is stripped from his powers and has to start anew. With the help of the rebel from the Chimera group Echo and returning Agency leader Goodwin, the goal is to overthrow the cooperation TerraNova and its maniacal leader, Elizabeth Niemand.

The biggest issue with the narrative is the misuse of Terry Crews. Here is a guy who has made a name for himself as a loud yet charming performer who oozes charisma. The best scene in the whole game is his introductory scene, but the rest of the game his dialogue is limited to quiet one-liners without any contextual purpose. It’s even worse where all of his dialogue is severely muted and often talked over by other NPC banter. 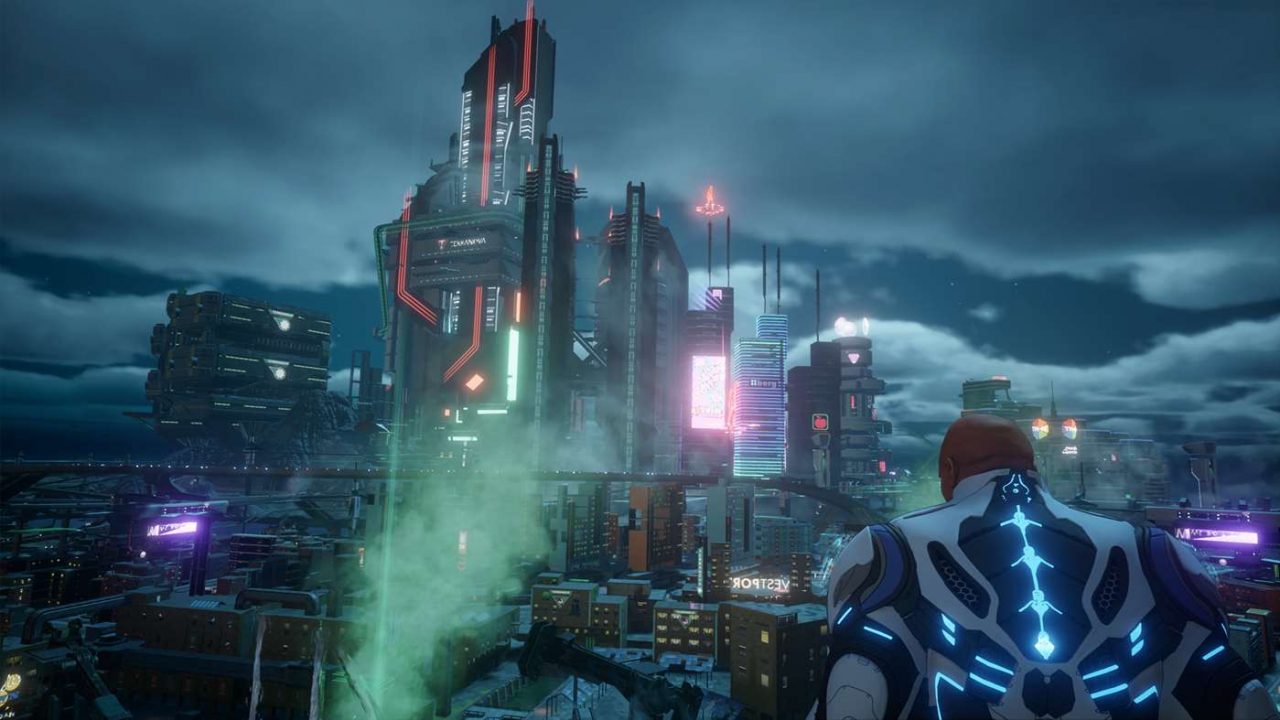 The rest of the narrative isn’t anything that hasn’t been done in a Crackdown game before. Often Goodwin and Echo will bombard players with chatter and occasionally info dossier on the big bad to defeat. Those dossiers have a neat 2D art with bright striking colors, but like the rest of the game, offer no substance.

Despite the focus on Crews’ character, players can actually choose from a variety of characters. Each character has a slight experience enhancement in a specific category. Every character can be augmented in five different categories: agility, firearms, melee, explosives and driving. By performing certain activities, an agent can gain ability points to become better in a category. In addition, there are also hidden orbs that can be collected. While they are the hardest to find, they also reward you with a boost in every category. 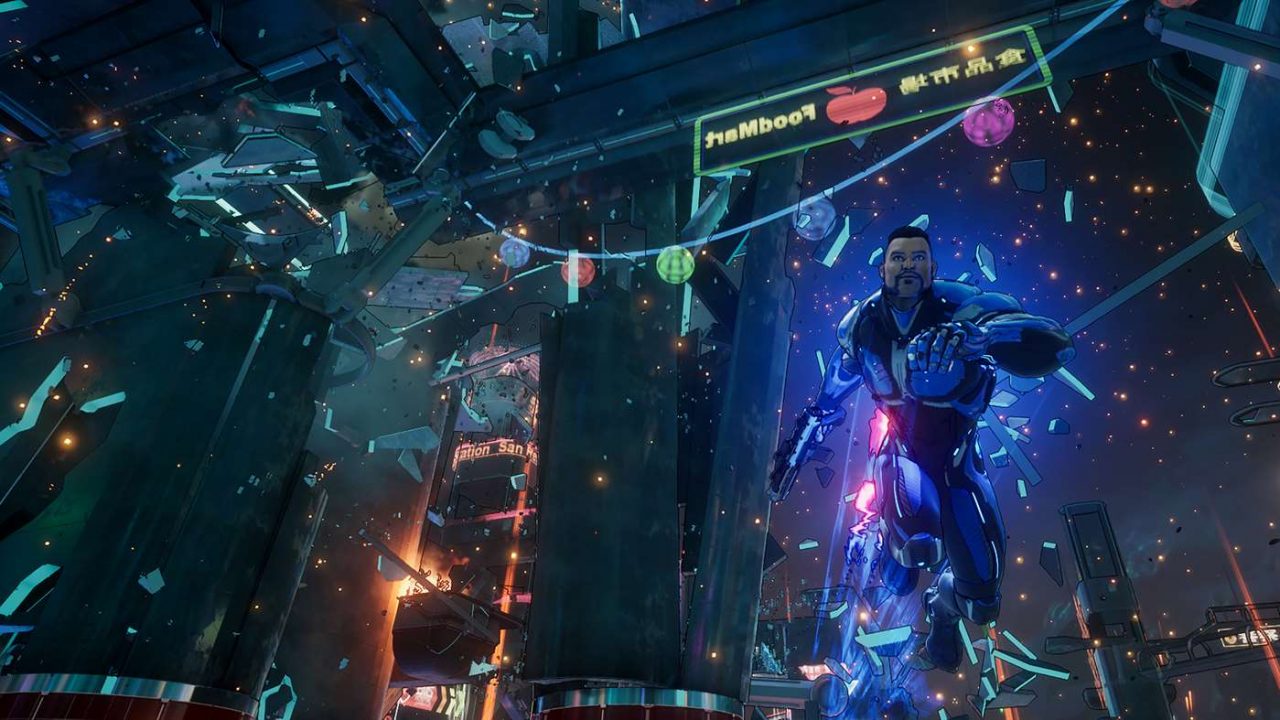 Probably the most fun to be had with the game, as it was with the previous two installments, is collecting agility orbs. Not only because of the tangible joy of collecting them, but the act of leaping to ridiculous heights and scaling buildings is easily the highlight of any Crackdown game. There’s also the ability to perform an air dash to help close distances. This is easily one of the best additions to the game.

It’s a shame because every other activity in Crackdown 3 feels like it’s stuck in a time warp. Crackdown 3 has a lock-on mechanic which should, in theory, help players target enemies amidst the chaos ensuing. However, at times the targeting system will point to a further enemy or object and proves unwieldy. Shooting itself is also clunky. A lot of guns don’t have an impact, or the ones that do tend to have ridiculous reload times. In fact, the best gun in the game is the Pulse Beam because it shreds EVERYTHING in its path. It’s to the point that every non-rocket weapon is rendered null and void. 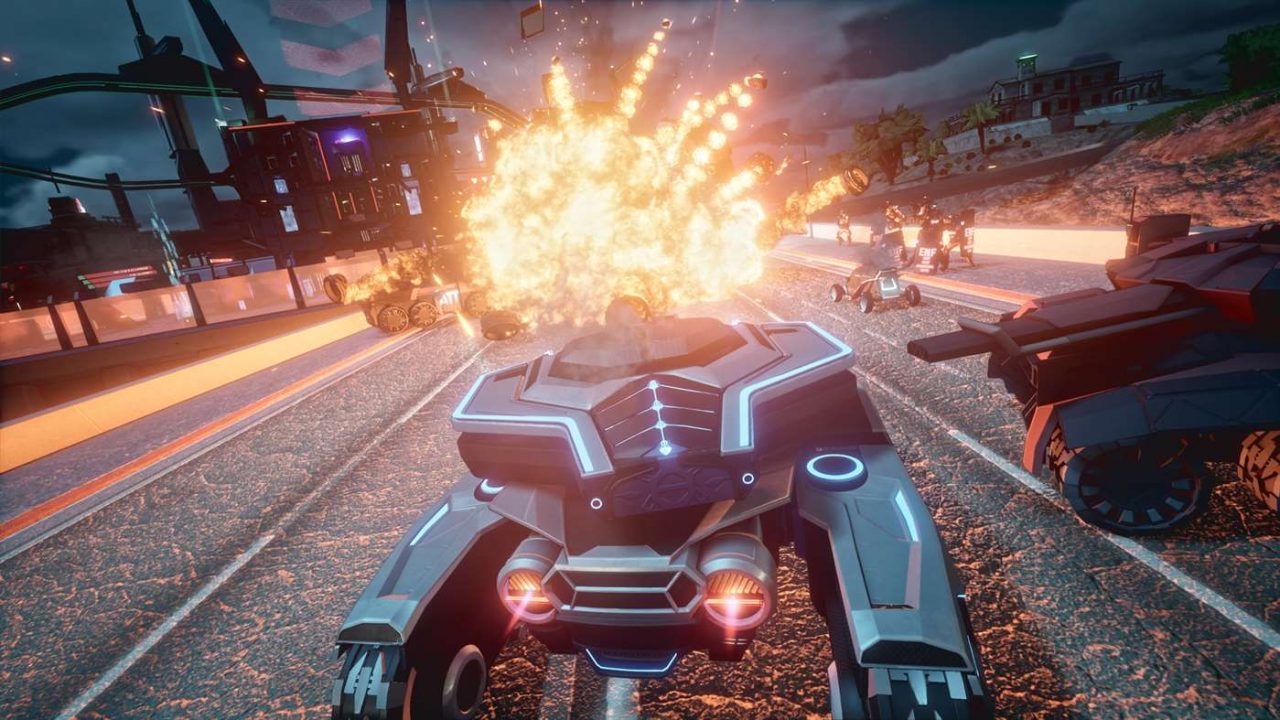 Despite all the mechanics in Crackdown, a lot are pointless. While players can lift heavy objects and toss them, it doesn’t seem worth it. Not only do they inflict very little damage, but it’s impractical to stop in place to pick something up, becoming cannon fodder in the process. Driving is even worse. While it’s neat to upgrade the Agency vehicle through experience, vehicles control poorly and more often than not, they flip for long periods of time. At the end of the day there is no need to even drive in the game. Not are there no enemy vehicles to stop, but jumping from one place to another is far more viable.

Missions tend to repeat themselves as well. Destroying pipe systems by wrecking valves, hacking turrets, or even freeing rebels to assist in a takeover will all feel pretty familiar soon enough. Those tasks may have some slight variation on them, but they lack any substantial differences. Because of that, the entirety of the world of New Providence feels lifeless without any kind of unique landmarks due to how similar all of its zones are. The only saving grace are the Propaganda Tower missions where agents have to scale giant towers with moving platforms in order to turn off a brainwashing broadcast from TerraNova. 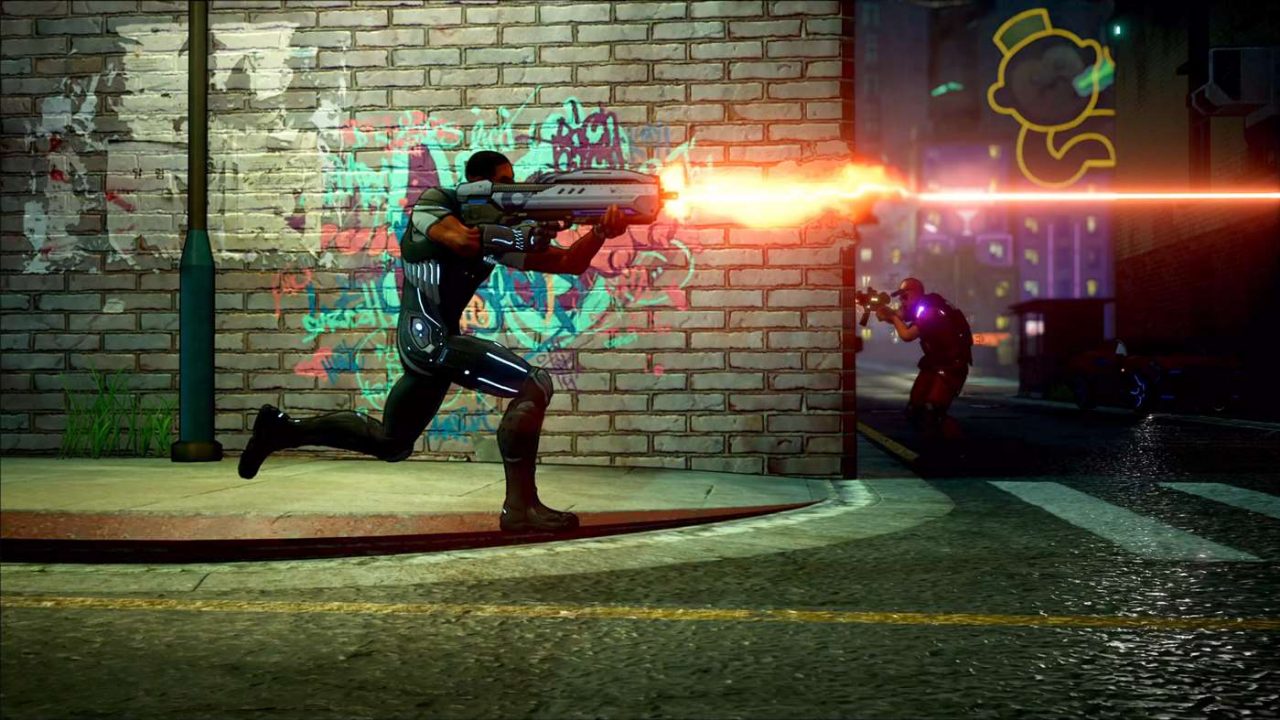 It doesn’t help that despite its massive delay, the game looks as mediocre as it does. The game doesn’t look much different than an Xbox 360 game with many texture pops. Framerate tends to dip into single digits, even on the powerful Xbox One X. Even in 4K, the game just disappoints in the visuals.

Crackdown 3 supports co-op multiplayer for the entirety of the campaign, which is a nice touch. The real meat of multiplayer comes in the Wrecking Crew mode. It is divided to two categories, Agent Hunter (Deathmatch) and Territories (Capturing areas). Both feel similar to other competitive shooters, only with Crackdown’s signature moon jumps. This mode exclusively boosts the jumps to maximum levels, making it stand out. In addition, Microsoft added destructible environments which are actually processed by their cloud service. While the technology behind it is impressive, it doesn’t add much to the gameplay overall. Sure it’s amazing to see giant landscapes blow to smithereens, but it only adds more chaos to an arena shooter where players jump all over the place. Plus the lack of a progression system doesn’t add much  staying power to the mode. 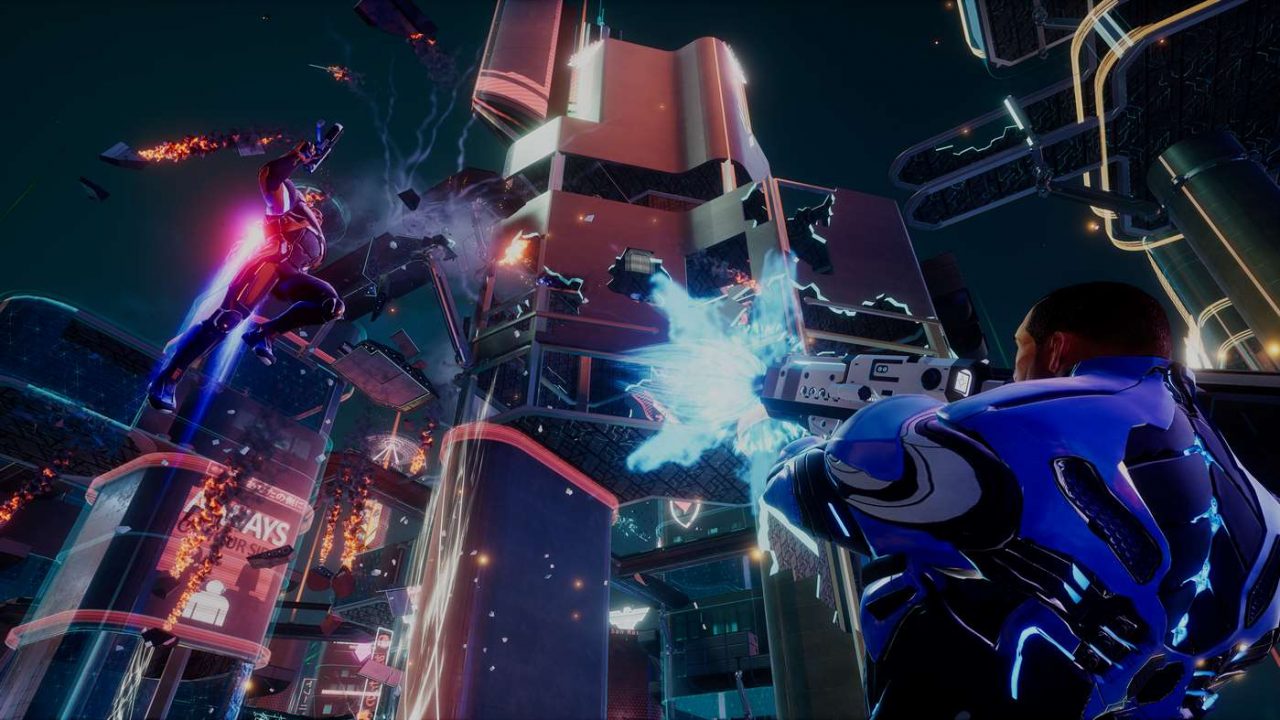 A lot of the problems with Crackdown 3 are related to how late this sequel actually came out. The underwhelming guns, mission structure, anemic story and dull yet unique take on multiplayer seemed to be stuck in the past. This is a game that seem to fit better in 2009 than it does in 2019. Considering how short-lived both the campaign and multiplayer modes are, it’s astonishing this sequel took this long to come out. If you are a fan of the franchise, you’d find things to love here. Even then, it feels too little too late.