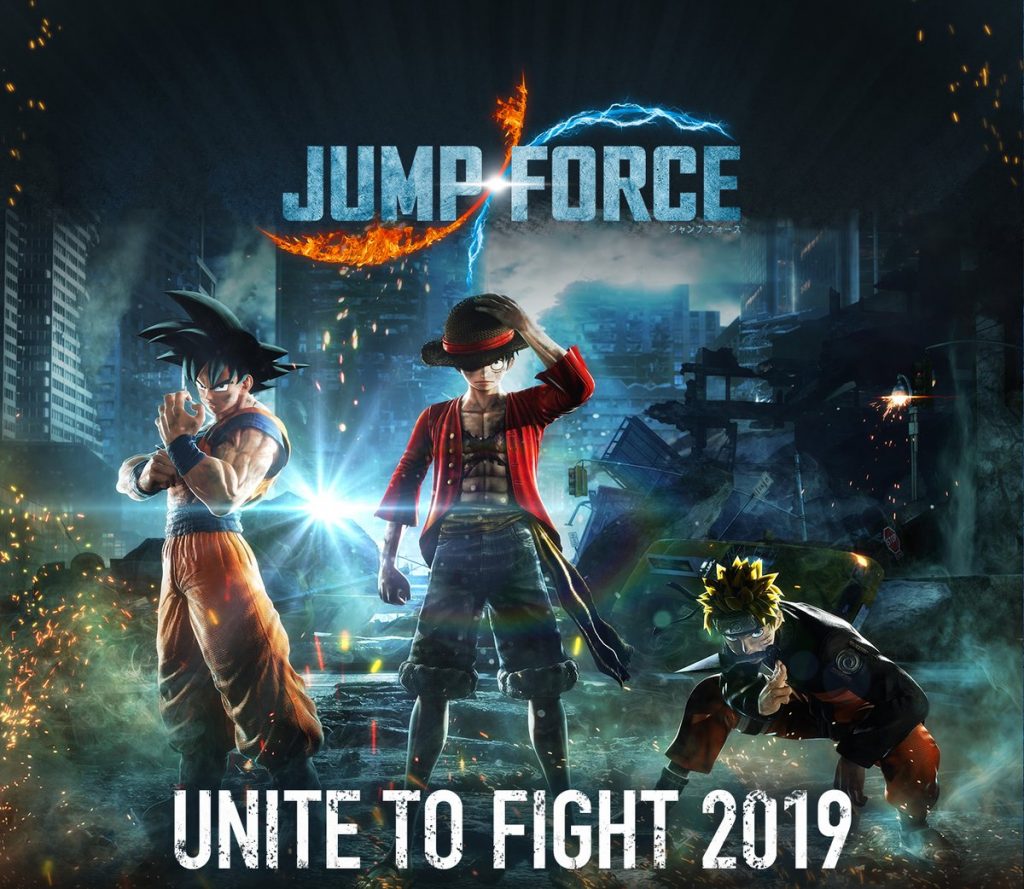 Manga fans likely know Shonen Jump all too well, as it has printed some of the most popular franchises, including Dragon Ball, One Piece, Naruto, and Yu-Gi-Oh!. Bandai Namco has now attempted to take the different universes from Shonen Jump and create a game for fans of all ages to enjoy, but can it succeed, or will it fail to impress?

On Earth, a tear has appeared in the space-time continuum, bringing characters from the various Jump series, such as Dragon Ball and Rurouni Kenshin, to life in the real world. The game opens with Frieza attacking a city, and you are injured during the assault. Luckily, however, Trunks and a navigator robot are there and, after a quick discussion, determine that the only way to save your life is to turn you into a hero.

Enter the Umbra Cube, which they utilize on you and increase your power tremendously. After you utilize your new-found strength to defeat a couple of enemies, you are taken to the Jump Force HQ, where Luffy, Goku, and Naruto each lead a team with different objectives. Naruto specializes in gathering intel, Luffy leads a group to invade enemy territory, and Goku’s group is responsible for containing the threats that emerge.

You also meet a new character who hails from your universe known as Director Glover. He acts as the leader of the Jump Force, and explains the situation, allowing you to choose which of the three groups you wish to join.

Now it’s up to you and the rest of the Jump Force to save other heroes who have been corrupted by Umbra Cubes utilized by the enemy group, such as Himura Kenshin and Yugi Muto, all the while attempting to set things straight.

Once you take control of your character, customizing it as you see fit, you have a couple of tutorial battles. Those who simply want to skip these can take down the opponent without doing what the tutorial says (instead of learning how to guard and utilizing it, for instance, you can attack the enemy and take it down if you want to skip it). Joining a team gives you a few abilities right off; I chose to join Goku and learned his Kamehameha, Gaara’s Sand Tsunami, Piccolo’s Light Grenade, and a move from Zolo.

Between fights you spend time in the Jump Force HQ, which has several shops and the like to visit. You can purchase clothing, accessories, and more moves to further customize your character, chat with the different characters, and take on a variety of missions.

Side missions have several optional challenges for you to complete as well, such as achieving a multi-hit combination or winning without losing more than a set amount of health. These challenges, along with the sheer variety of moves you can learn and utilize help keep the game from becoming too stale. These moves utilize a special power meter as you use them. 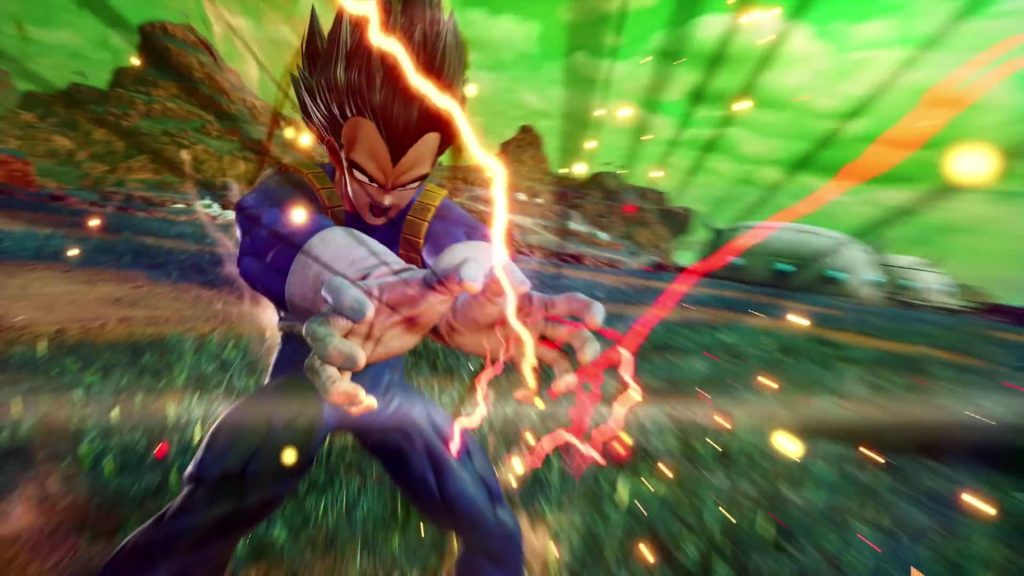 Fighting-wise you, in addition to the special attacks you can purchase and customize your character with, have a regular and strong attack, both of which can be charged to break the enemy’s block. You also fill up another meter known as Awaken that, when at a certain point, allows you to perform a powerful move (in the four I started with, this would be Light Grenade), or press the right analog stick to transform, which increases your abilities. Transforming also tends to make characters change appearance; Goku, for example, can turn into a Super Saiyan or Super Saiyan Blue, depending on how much of the meter was filled.

The combat is fairly easy to pick up, but you do also have quite a bit to learn as you fight. Timing your abilities and utilizing them during normal combinations is one example, as well as attacking as your opponent does. In one example, I was playing as Yugi, curious as to how he would handle, and was fighting Frieza. I used his ultimate to call out Slifer the Sky Dragon, who attacked with Thunder Force, and Frieza used his ultimate, Death Ball. The result was that the two attacks cancelled each other out, and neither Yugi nor Frieza suffered any damage whatsoever. Had either of us been a second later, we would have been caught in the opponent’s attack and been unable to use ours until they finished. 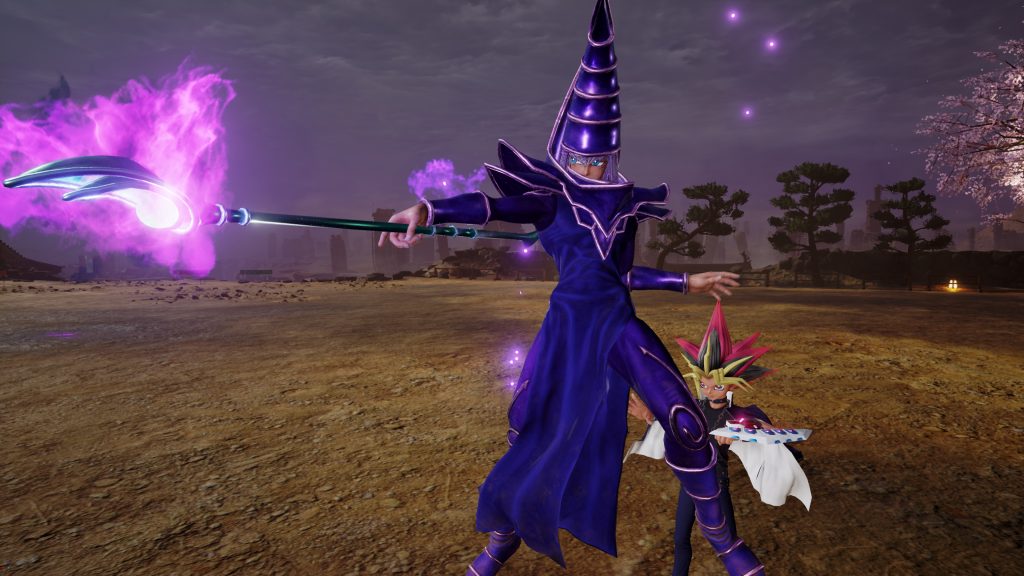 You may expect Jump Force to feature bright cel-shading, the way most anime games do, but if so, then you would be surprised. The game utilizes more realistic textures and settings, with a high amount of detail in each character’s clothes, as well as a grittier look to the characters themselves.

The CGI scenes are quite nice, although in-game animations can feel rather stiff at times, which is a bit surprising considering how much detail the team placed on the graphics.

In terms of audio, if you were hoping for an English dub option, you would be disappointed. Voices are Japanese only, which was explained as being due to licensing issues, thanks to a variety of different companies in North America providing the voices for the english versions of the different shows.

Overall, Jump Force feels a bit like Dragon Ball Xenoverse, but also feels like it doesn’t approach the level that Xenoverse achieved. The developers did want to make it accessible to all ages, however, and it feels like that was successful, so fans of the different series should enjoy the game.