The Future Is Now With Terminator Salvation: Fight For The Future!

Earlier today, I had the opportunity to check out Terminator Salvation: Fight for the Future, a new VR experience from SPACES. Located in San Jose, California, the new experience is surely going to interest people looking to try something new. Based on the 2009 film, Terminator Salvation, up to four friends can fight for the resistance against the Skynet machines. Using full body hand and foot tracking sensors, facial scans and haptic technology, players can truly immerse themselves into this post-apocalyptic future. 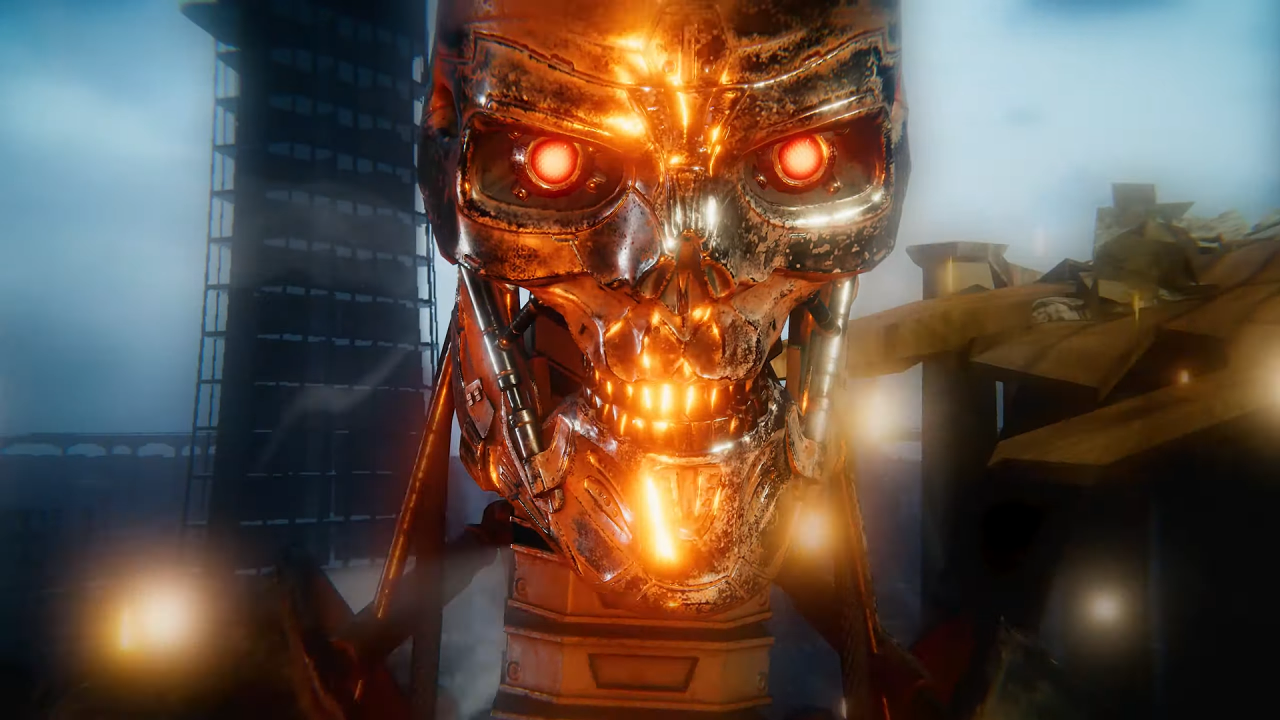 Before players begin, they’ll be handed a boarding pass, a promotional card that has a unique QR code on it. They’ll then scan the QR code with the registration system and fill out some basic information. Immediately after, players will then have their face scanned to represent their character during their mission. The boarding pass will be yours to keep, and it will save the information for future visits. When all the players are ready, a staff member, acting as the Captain for your mission, will lead you into the briefing room.

In the briefing room, you’ll watch a short video that explains the mission. The players are tasked to infiltrate a location occupied by T-600 Terminators and place a nuclear reactor core to sabotage them. The stage is set in a post-apocalyptic future of Los Angeles, having a color palette that matches the aesthetic of the movie. As members of the resistance, you’ll use an experimental procedure to be temporarily transformed into a T-600 model Terminator.

After the briefing, staff members will equip you with your sensors and gear. Sensors will be placed on both your hands and feet, and vests will be placed on to act as your armor. You’ll then be lead closer to the mission area, where you’ll place on your VR headset. The experience uses Oculus Rift headsets, which gives a high quality display for the graphics in the game. Once adjusted, the staff members will appear as generic white robots (think Astro Bot) to tell them apart from your teammates. I have to say, for how immersive this experience is, they should’ve picked a different look for them. It’s a minor issue, but it breaks the visual aesthetic a bit.

Players are lead to the mission area, having a full sense of their environment through the headset. Upon reaching the next room, players will have to stand in front of their portrait to start their machine transformation. It’s here that your portrait is applied to your avatar, allowing players to distinguish from one another. A staff member will come out to hand you your blasters, which have a surprising amount of heft to them. Players will be able to use their blasters right away, getting a feel for how to handle them. Right after, players are teleported into the training ground, where they can practice their aim and precision.

The training area gives a good idea of what to expect. The environment is full of interactive scenery, and the area, while small, gives enough freedom to move around for all the players. Not only are there targets to shoot, but there’s also helicopter blades to spin, barrels to blow up, and points to gain. The visuals aren’t going to be mind-blowing, but they work well within the experience. After getting a couple minutes to familiarize yourself with your surroundings, a transport will appear for players to step in. The transport gives players a gust of air to simulate the feeling of actually being there. Almost immediately after, everyone will be dropped into the mission area.

The mission is pretty simple, as it takes place entirely on the roof of a building. There’s more objects to destroy, like toilets (which may or may not earn bonus points) and signs. Even a water tower that releases actual mist when shot. Not long after entering, enemy terminators will appear. How you decide to handle this is up to the team. With my team of three, under the team name “The Resistors”, we mostly took on enemies equally. Enemies can take quite a few bullets, but they eventually go down. Luckily, you’ll have unlimited ammo to fight with. 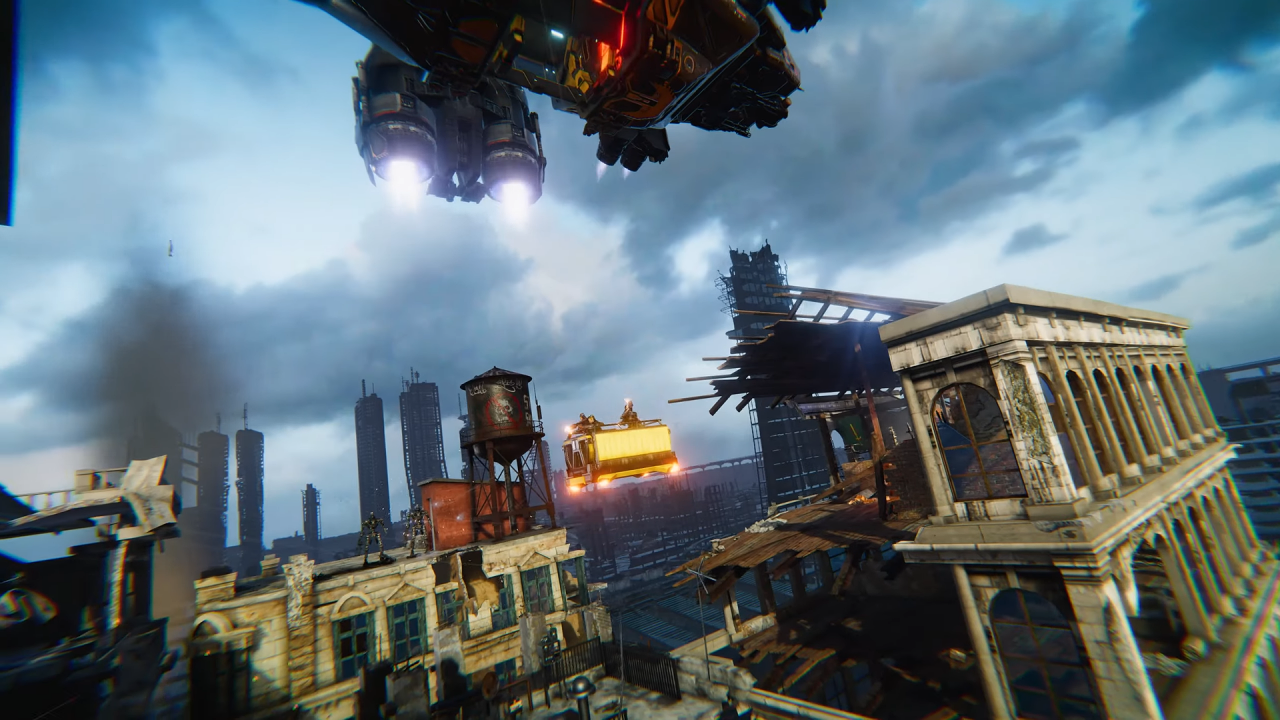 Eventually, more props fall into play, as the nuclear reactor core appears in the mission. It’s suggested that two players work together to lift the core and take it to the designated area. Using the headsets built into the Oculus, players can communicate with ease, also while taking instructions from the mission Captain. Working with one of my teammates, we completed the task while our other teammate covered us. The core then needed power, which required finding a fuse. It’s pretty cool how the objects are implemented, and thanks to the display, they’re easy to locate.

Through a couple more tasks, the mission can be completed successfully. In my brief demo, I definitely wondered at the possibilities of the mission. Could we have been defeated by the enemies? Was there a time limit? What exactly determines the points? Regardless of these questions, the experience is a lot of fun. Players will use the transport to return to the training ground and then teleport back to the transformation area. At this point, the experience is over.

Overall, I was left with a good impression of the experience. Even with my own personal opinions of Terminator Salvation, it didn’t hinder my enjoyment of the game. I only wished the experience was longer, as it went by so quickly. From mission briefing to debriefing, it lasts about 30 minutes. The shooting portion itself last about half the time. After completing the experience, players will then walk out to see their highlight video, showing various moments from the video.

Speaking to the CEO and Co-Founder of SPACES, Shiraz Akmal, I got a little more insight on the experience. When asking why Terminator Salvation was used for the game, he brought up the popularity of the franchise. Mentioning the new film trilogy by Skydance Media, he said it was a good time to use the iconic property. When asked about expanding the game, he mentioned that they had ideas to add more content to the experience. New missions and modes were just the start of the potential possibilities he brought up.

The Terminator Salvation VR Experience has been open in Tokyo, Japan and Irvine, California for a bit. The San Jose event has them partnering with Cinemark and officially opens tomorrow on February 8th. Tickets range in price depending on location and time, as earlier times will usually have a discount. At the San Jose location, tickets range from $19.95 to $29.95. James Meredith, Cinemark’s Senior Vice President of Marketing & Communications, seemed incredibly ecstatic about the partnership.

Considering the length of the experience, it’s up to the consumer to determine if it’s worth the price. Either way, the game is fun and a great time to have with friends. It might have some kinks to work out (mostly with avatar movement animations), but the experience is what matters. Having enjoyed my first experience, I can only wonder what new missions might be added. Even if Terminator isn’t your thing, it’s worth giving this a shot just to see how far technology has come. If you’re interested in buying tickets for the San Jose Cinemark location, you can click here to reserve a time slot.