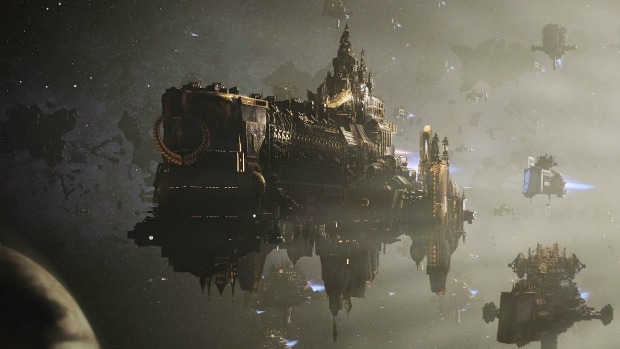 Warhammer 40K is a universe that has quite a few video games created from it. That said, most people agree that the majority of these games aren’t all that great. Will Battlefleet Gothic: Armada 2 be an exception to this rule, or will it fall into the ranks of mediocrity?

Battlefleet Gothic: Armada 2 occurs during the 13th Black Crusade, which, fans of the Warhammer 40K universe know, is among the most recent events in the lore. You begin as the fortress world known as Cadia is under assault, and you need to defend it as Abaddon the Despoiler attacks.

There are many recognizable characters to be seen within the game, including Trazyn the Infinite and Ursarkar E. Creed, with many of these coming to your screen for the first time in video game form. To help expand the universe, the developers have also added in quite a few cameos and mission dialogue. In addition to the dialogue, there are a number of different scenes in which every faction that you will meet are detailed, as well as the systems you visit, which should help newcomers, such as myself, from getting too lost in terms of the lore.

There are three different campaigns -the Imperium of Man, the Necrons, and the Tyranids- with a fourth planned for later launch, and a total of twelve different factions. Although only the big three have campaigns, you can utilize the different factions via multiplayer matches, which will be discussed a bit later. For now, however, we’ll go through the basic systems and gameplay.

Each of the campaigns utilizes a turn-based galaxy map for you to use to manage your fleets, conquer different systems, and launch your full scale assaults in real-time tactical battles. The game is built around the space engagements, of course, but this map can offer a breather when needed.

As you battle, your ships will move and rotate through the battlefield as they fire upon your enemies. You will see your ships light up space with bursts of fire, shields fade, then burst back into life, a crowded background of space installations and planets, and ships exploding as they reach their limits. All of this will occur while you also have your ships’ hulls, the different subsystems, and troop morale all being simulated.

As battles rage on, you have a variety of fighters, boarding actions, and special abilities across all the races that you will need to use wisely if you hope to use all of these systems to their full potential. You can also determine the priority of your targets, the angle to fire, what parts of the enemy ships to fire upon, and even engagement range, but you will need to keep an eye on your fleet at all times; You never know when one may get stranded or an errant ship will crash into another.

Of course, that noted, crashing ships into another can actually be a useful tactic. If you set up a larger ship to intercept a smaller, slamming into the smaller ship’s side, you can push the smaller ship around, all the while digging ever deeper into your opponent’s hull.  Obviously, attempting this tactic in reverse, utilizing a smaller ship to slam into a larger one, can be quite a bad idea. 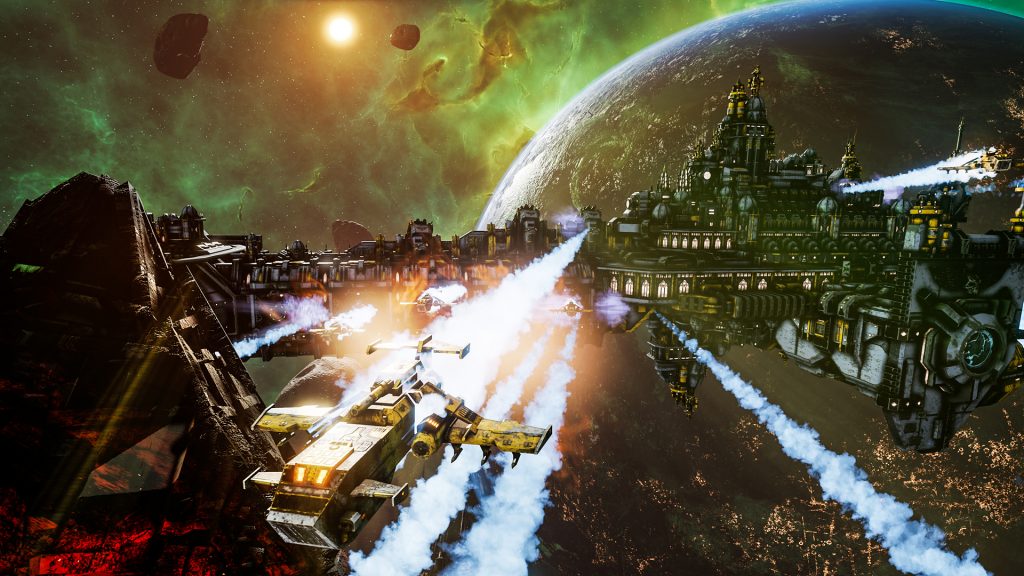 Should you prefer, you can also have your ships automatically engage in battle, rather than attempting to do so manually.

While you engage in battle, you’ll be moving from one star system to another, increasing the levels of your planets, creating new ships to reinforce your growing fleet, and building defenses to help stave off foes, including pirates and Xenos. In terms of planets, there are some that have special traits that will grant extra resources, ship construction points, replenish your troops, and even grant battle plans to help you unlock more systems, further expanding your might. Of course, not everything is sunshine and roses, as others suffer from slower evolution, and others still can simply be resource drains.

Tyranids, as they go through each system, actually devour said systems as they capture them. Some provide massive resources in the form of biomass, and you will have to keep in mind, while playing through the Tyranid campaign, that once you devour a system here will be no further biomass.

We’d noted the twelve different factions offering up different abilities. To go a bit into detail, the Imperium is the most balanced faction, featuring defenses, torpedoes, battering rams, and cannons at their disposal. In terms of the abilities, hey can utilize augur bombs and teleporting plasma to name a couple. The Necrons, on the other hand, feature regenerating hulls, short-distance warp capabilities, and 100% accuracy weapons that act like chain lightning, jumping between targets. In terms of abilities, perhaps one of the most notable abilities of the Necrons is the ability to create a link of lightning between two ships. Aside from looking cool, this link can deal colossal damage to anything that you manage to catch in it.

Unfortunately, if you hoped to move ships from one fleet to another, you would be disappointed, as there is no way to do so.

Battlefleet Gothic: Armada 2 is a beautiful game with crisp, clear audio. The soundtrack and voices feel like they match, for the most part (of course, those who know the lore better than I do may disagree on some of the voices.) and I encountered no issues arising from graphical or audio quality.

Overall, Battlefleet Gothic: Armada 2 is a rather enjoyable game. It feels like those who are invested in the Warhammer 40K franchise will enjoy it far more, but newcomers should also find plenty to enjoy if they have fun taking battles into space. I played with a friend and we did not experience any issues throughout our run, so multiplayer, at least in that respect, seems quite solid as well.