Bandai Namco’s Katamari Damacy was a sleeper hit back in 2004. Its simplistic visuals accompanied by some acid-trip inspired flair was definitely something that could only hail from Japan. Despite its quirkiness, it garnered a cult following that turned the small little game into a franchise. However, there wasn’t a proper game since the young days of the PS Vita.  Now, years later, Bandai Namco brings an HD remaster of the original game on both the PC and Nintendo Switch under the moniker Katamari Damacy REROLL. Even after all this time has passed, there is still something enjoyable rolling a bunch of junk into a ball. 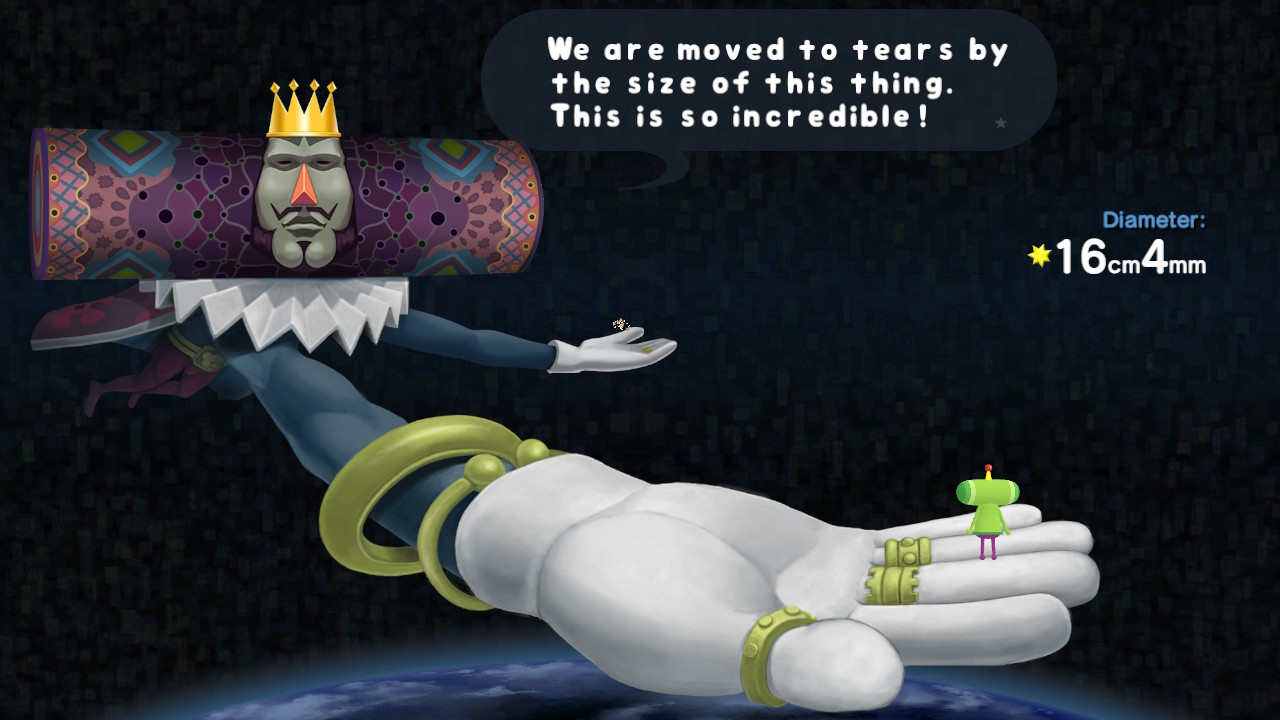 The story, in the loosest term possible, is completely bonkers. The King of All Cosmos decides to just crash into every star in the sky. It’s up to his punitive son, the Prince, to reconstruct all the astral remains of his dad’s stupor. There is little in the way of story, but it is entertaining. The King speaks in plural, as well as loud record scratches. His dialogue is nonsensical, although it does add to the charm of the game. In between levels, there are short cutscenes featuring a lone boy that notices the events occurring in the sky. Unfortunately, no one seems to believe him. Those voices are now in Japanese, which is welcome, but there was something unintentionally funny in the bizarre English dub that the PS2 original had.

The goal of the game is simple. Using a round object known as a Katamari, The Prince must roll objects of equal or lesser size in order for them to clump up and become bigger. If he tries to collect objects that are bigger than the size of the Katamari, they won’t attach. The idea is to explore a variety of zany levels and figure out the best tactic to collect as many objects as possible within an allocated time limit. 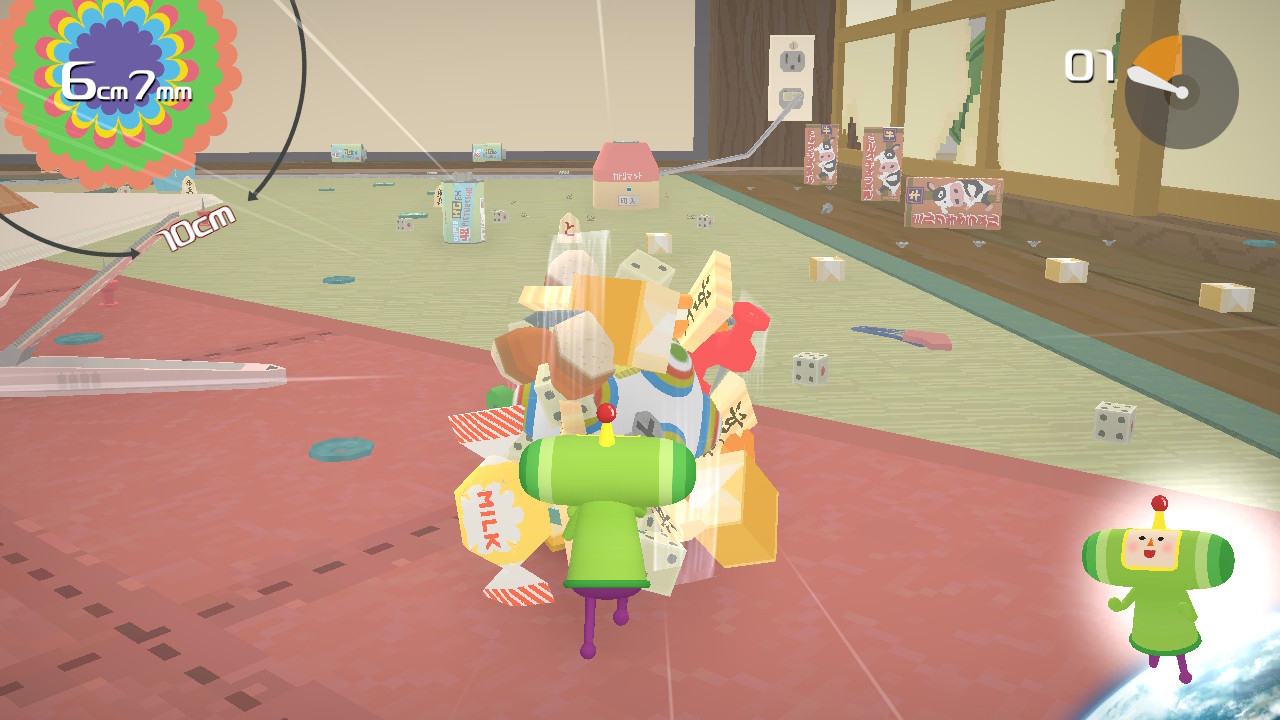 What makes the game extremely intriguing by design is its sense of scale. The Prince starts out with a tiny Katamari that can only pick up tiny objects like tacks or erasers. As the Katamari gets bigger, so do the objects that can be picked up. It doesn’t take long to reach the level of RC cars, chairs, animals and even people! It’s amazing to play in a level and how the perspective shifts as time goes by. At first the camera is zoomed really close to focus on how miniature the Prince and his surroundings are. Later on, the camera is pulled back, adjusting to the size of the chaos. It’s really something to go back to the beginning of a level and tackle it as a giant sized Katamari, especially to pick up things that weren’t an option before.

Unfortunately, the issues in the original game haven’t been addressed in REROLL. For one, the format is repetitive. While there are some different levels that involve collecting specific objects like crabs or swans, they all fall under the same category of rolling things up. This is a game meant to be played in rather short bursts. In addition, while the game controls well, there are some frustrating moments where the Katamari gets stuck between stuff and it’s impossible to move it, costing time in the process. 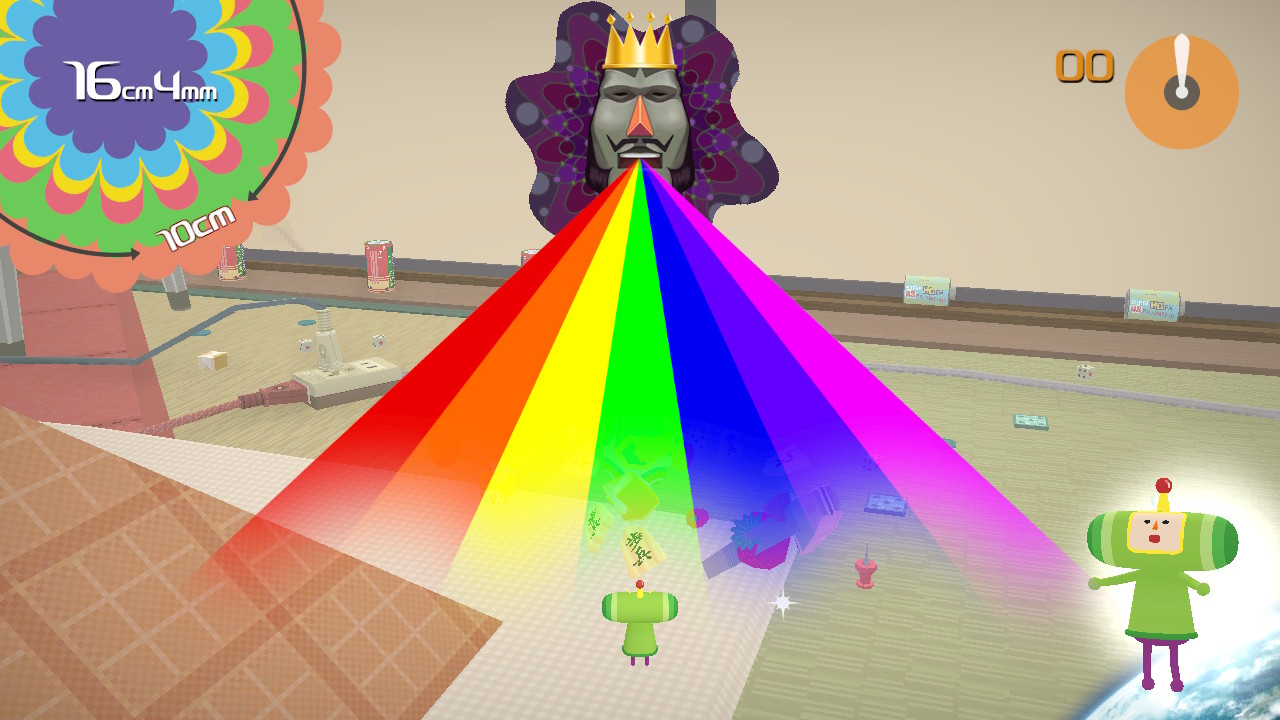 As an HD remaster, Katamari Damacy REROLL gets the job done in the presentation department. The game is now in widescreen, and all the assets look sharper than ever before. Loading times are also slightly faster than the original release which is also welcome. Despite this, it’s rather disappointing that a 14-year old game seemingly can’t get boosted up to 60 frames per second. Katamari was never a boundary-pushing game from a visual standpoint, so it’s rather disappointing that the Switch release doesn’t double the framerate of the original PS2 version. There are also no additional features to speak of, making the game a rather short venture. Still, considering its low price tag, it’s a minor quibble. Heck, experiencing the catchy soundtrack alone should be worth the price of admission.

Katamari Damacy REROLL is a nice stroll down memory lane. While the graphical touchup could’ve been more substantial, the game itself remains quite a joy to play years later. Its levels compliment the Switch’s mentality of pick-up-and-play, and its crazy humor is bound to put a smile on everyone’s faces. It’s easy to see how this series managed to go on such a huge roll afterwards.