Have you ever read halfway through a book and thought, “I’m not really enjoying this, but there’s only 100 pages left”? What about going to the movie theater and thinking, “I want to walk out, but I already paid for the ticket(s) and an ungodly sized bucket of popcorn”? Of course, these feelings can also be applied to the realm of video games. About halfway through my playthrough of developer Ravegan’s game Blue Rider, I wondered why I wasn’t playing a better game. Yet I persevered and finished the game. 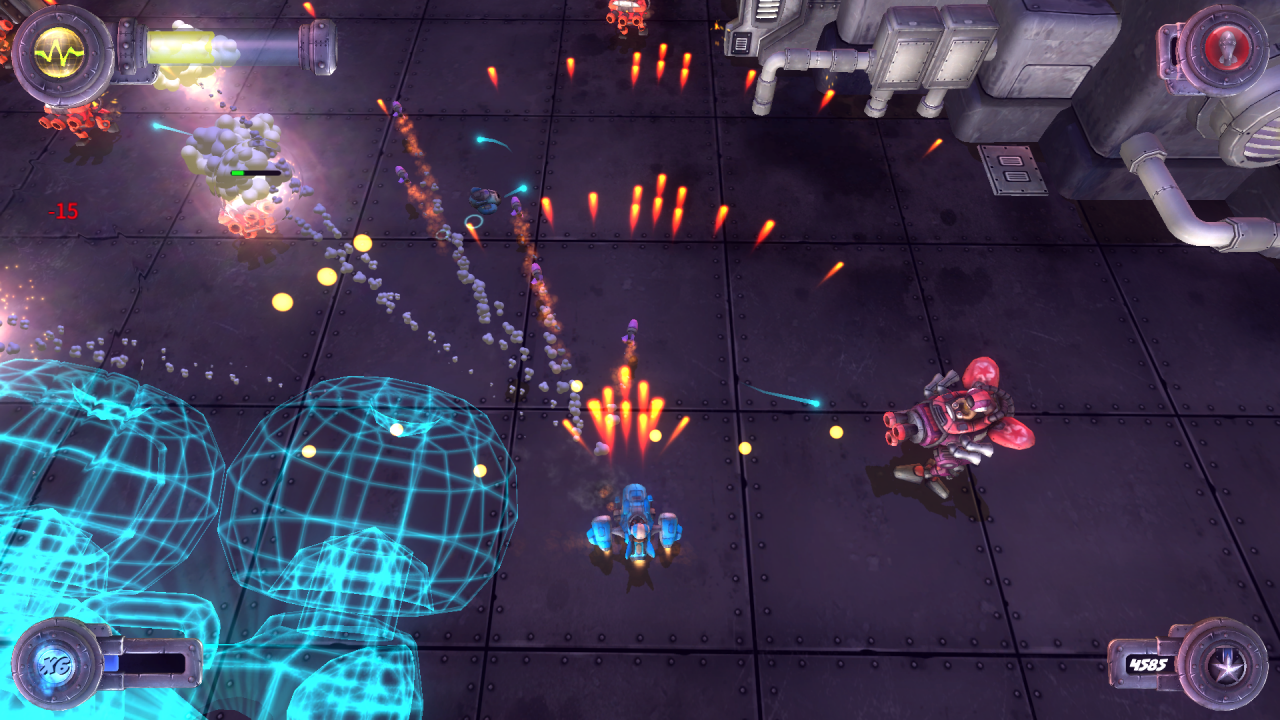 The game doesn’t tell a story, so not much to tell there. The game just has you select the difficulty and starts the first of nine stages. It gives a controller map while the stage loads, then you take control of a little blue ship with a small blue guy inside. Traversing each stage, you’ll end up shooting orange and red infantry units, tanks, boats, mounted turrets, and others while avoiding their incoming fire. There are weapon upgrades and hidden relics along the way, which boost your power and overall score, respectively.

At the end of each level, you take on a boss inside of a small circular arena of sorts. One of the main features (in a game that has almost no features) is the rankings section. Whether you play on easy, normal, or hard, the game tracks your score throughout your playthrough and totals it all up once you’ve died or beaten the game. You can track your highest respective scores and see where you fall in line with players around the globe. Once you’ve done all that, you’ve done everything that the game has to offer. 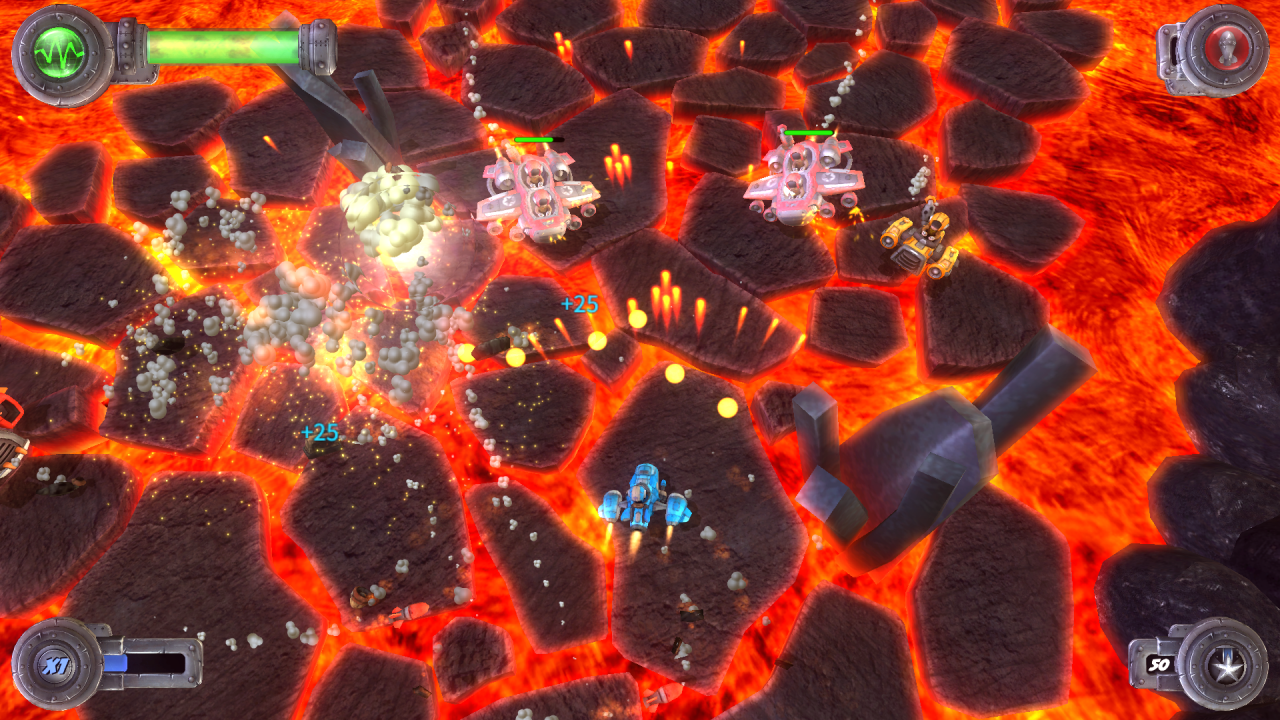 Pros: Simply put, this game does very little well. What does make the game somewhat novel is its approach to an overhead twin stick shoot-em-up. Rather than operating in a typical fashion of the genre where it is always pushing you from the bottom of the screen up or from the left of the the screen to the right, Blue Rider allows you to freely move up, down, left, and right throughout the environment at your own pace. This allows you the opportunity to approach enemies cautiously if desired. One thing that I initially thought was an issue was the character movement, but it ended up being a redeeming quality. It always seemed like I wasn’t stopping as quickly as I wanted, until it clicked after a few levels. The game became much more enjoyable when I started moving more horizontally instead of vertically.

Cons: The levels had a “samey” feel throughout with gameplay and appearance. The exception to that was one level towards the end. The environments did not feel inspired and came across as copied and pasted. It is also curious that the game doesn’t tell you what level you are currently on. At one point, I didn’t know if I was on the fourth or fifth stage, and I had forgotten how many there were in total. With no story to follow, it felt like I was wading through the abyss. There were also audio issues. First, the sound effects drown out the sound of the music. Second, there were only a couple of levels with music that stood out in a positive manner. 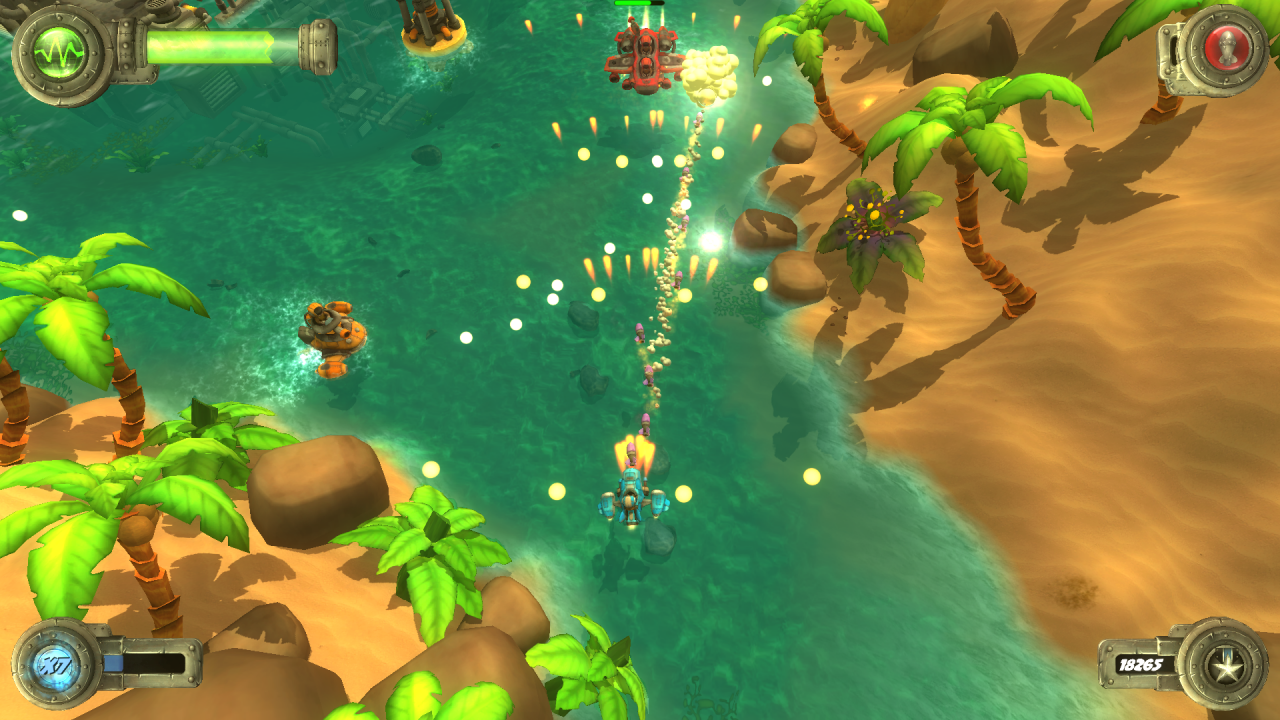 This brings me to a bigger issue: you can’t change any audio or display settings! With that in mind, you are forced to experience the game only via the default settings. Audio sliders, brightness, and sensitivity be damned (apparently). Another big gripe I had was the weapon “upgrade” system. If you are utilizing the red/spread weapon, which is what you start with, then collecting a blue power up will only switch you over to a more focused linear weapon. The inverse is also true; collecting a red power up while you are currently using the blue weapon just causes you to switch over. The issue is, why wouldn’t it upgrade as it switches your weapon? Finally, the game has almost no replayability. Once I finished the game, I had no desire to play it again.

Unfortunately, this game has very little going for it. If there was more variety with each level, character and ship customization, ability to change settings other than difficulty, and more content, then it may have been a better game.