After six long years of uncertainty over getting a follow up or not, we return to the realm of Darksiders. The Four Horsemen of the Apocalypse continue their quest to save humanity and uncover the secrets of the Charred Council. As Darksiders allowed you take control of War and kick off the apocalypse properly, Darksiders II allowed you to assume the visage of Death and his quest to restore Humanity. With Darksiders III, you command the rage of Fury, the only female Horseman. She’s not only the loudest of the four, but also the most interesting of the group thus far. I’d even argue that Fury’s self-awareness throughout her journey rivals that of Kratos’ from this year’s God of War. We’ll talk about that in a little bit. 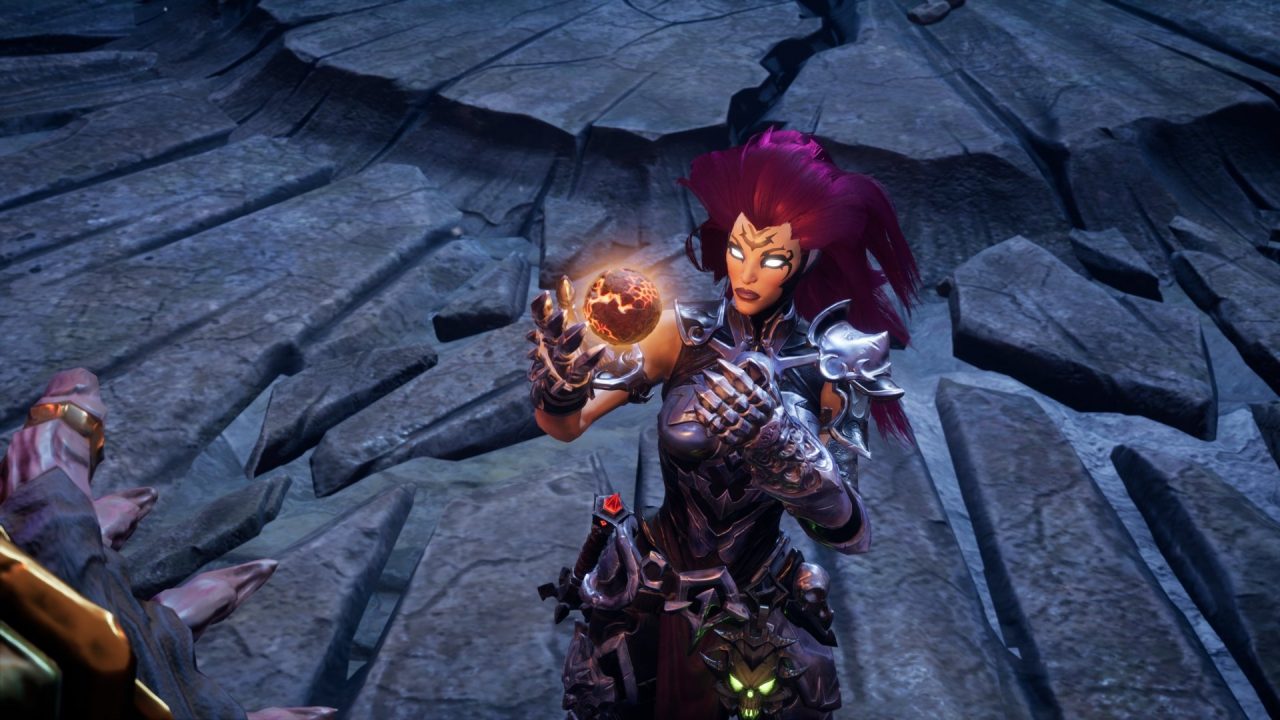 Fury’s task in Darksiders III is to stop the Seven Deadly Sins in order to restore balance to the world. Each sin is represented in a way that not only embodies their namesake, but gives you a slight hint on how the encounter works. Wrath is a fiery demon who’s bested by dodging his attacks and baiting his cleaver throw for good attack windows. Avarice often stops battle to throw his possessions at you, so you know what you’ll have to dodge. Gluttony will try and inhale you, so you’ve gotta trick him into hurting himself.

Along the way, Fury finds herself in not only a physical battle but also an intense emotional one.  As you approach each of the sins, more information is uncovered to the player. One thing Darksiders III does completely different from the previous two entries is that it thrusts you directly into combat. It expects that you’re already somewhat familiar with not only the combat, but also the story and characters as well. Even the Makers are briefly introduced but not at all explained for new players. You just kind of find the Maker’s Forge sitting in the World Tree and they don’t explain who Ulthane is or his significance from the original story. 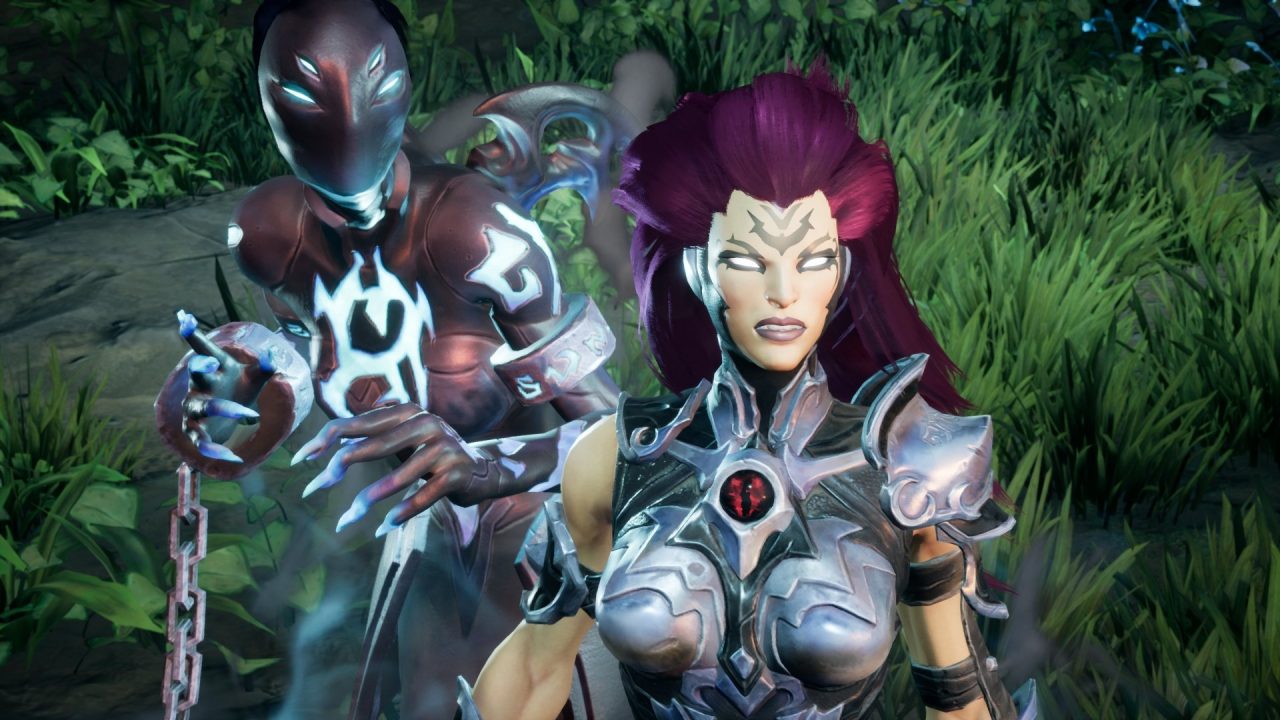 Accessibility is an on-going issue in this game, because characters are introduced but they don’t ever really get explained. Fury starts her quest and is suddenly aided by a new female Watcher, who’s presence is never really explained. When Fury asks for info, the Watcher dismisses her by just saying she needs a guide. This stance just makes Fury stop asking her new companion in a “deal with it” sort of manner.

Fury’s commentary is witty and spiteful, which is exactly what I would have suspected from Fury as a character. In fact, Fury is the most attached I’ve ever felt to any of the characters in this series. While War and Death faced betrayal, Fury is greeted with indifference, blind rage, heartbreak, eventually being betrayed herself. Fury jokes early in the game that she’s bored, threatening to kill Rampage just so she has something to do, citing love as the only thing stopping her. That’s called foreshadowing, kids, and it’s really well done. However, a story cobbled together through a bit of shaky ground can be forgiven. The story has never been “excellent” in this franchise anyway, but Darksiders III nails it in certain places while completely bumbling it up in others. 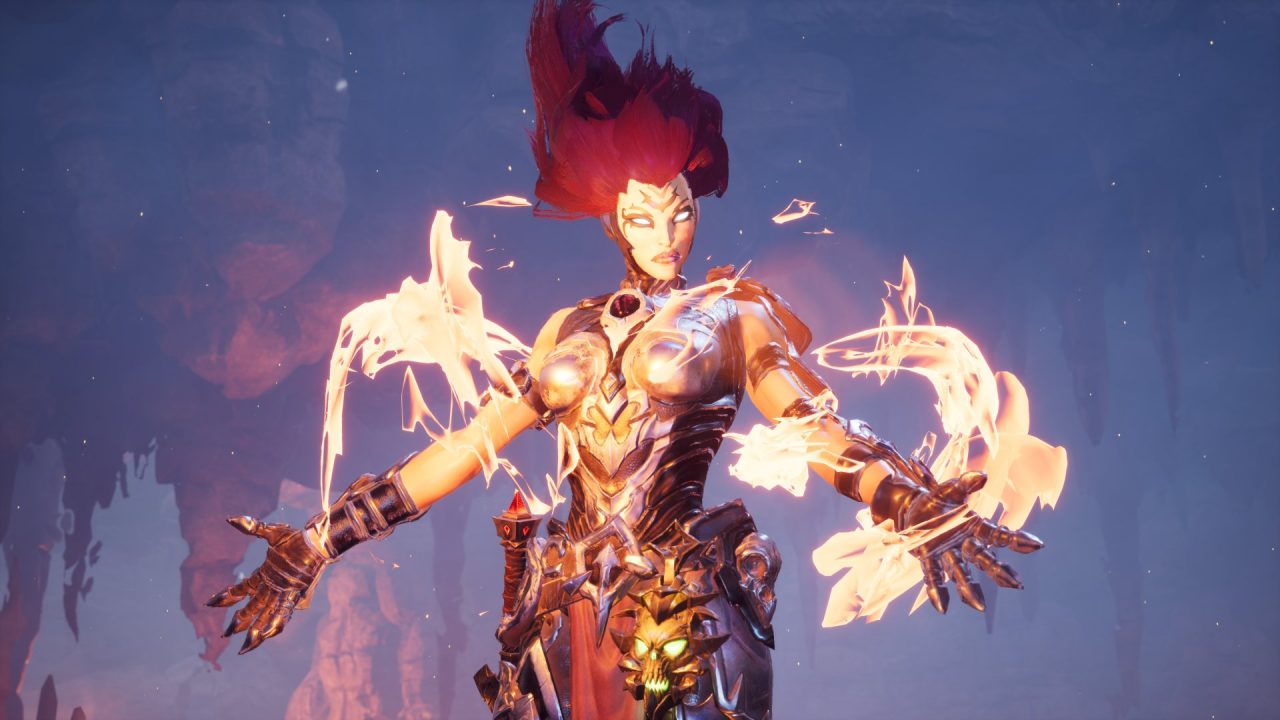 There’s a great scene where Fury faces one of the sins, unable to touch them due to her rage. The sin is suddenly shot and killed by Strife in a moment where the Horsemen are all reunited, elating Fury. It’s when the other three kneel to her as their leader that she realizes it’s an illusion, snapping out of the trance. That part is awesome, as is the post-credits scene which teases a fourth game. Fury’s “final gift” from the Lord of the Hollows isn’t ever explained, almost like they didn’t want to commit on what it was. It felt like they just dropped some vagary so they could flesh it out in the next Darksiders game.

Combat is abysmally obnoxious because half the things you want to do simply don’t work. Fury often struggles to even use her whip grab to swing. For whatever reason, the camera can’t see the anchor points, causing her to fall despite proper input of the command. This is also prevalent in dodging, as even once you get used to the timing, Fury often takes damage during a counterattack. The basic lack of invincibility frames and a small dodge window forced me to turn the difficulty down in order to progress past the second boss. It was basically impossible to defeat without dying in two hits otherwise. Fury eventually picks up gems that enhance her abilities, one of which does increase your dodge window. Unfortunately, it comes way later in the game to be impactful, feeling like a slap in the face when it’s finally found. 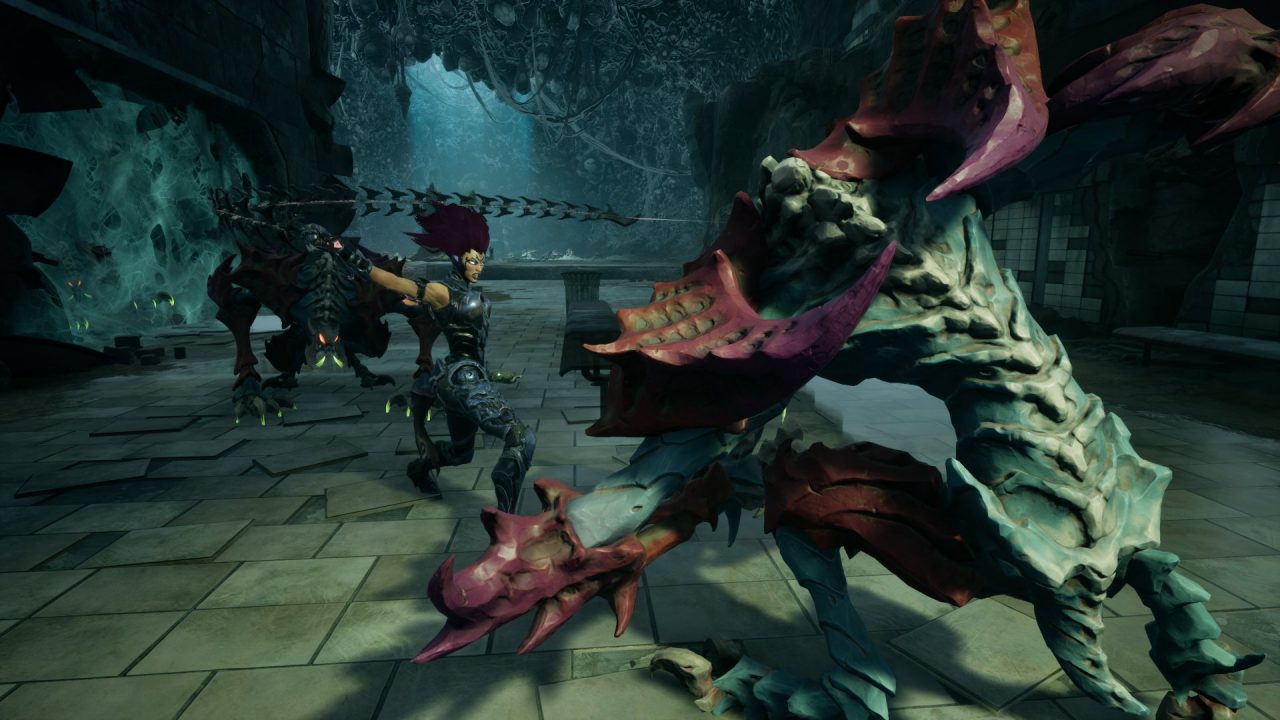 When combat works, it feels great. Dodging people and stabbing them with the lightning spear or unleashing a well timed force hammer smash felt great. Despite that, being 100% vulnerable when using items or consuming the nephilim respite (aka Estus Flasks) is terrible and takes four steps back when you think about it in motion. Not everything needs to be Souls-like, and Darksiders 1 had the soul gain and healing formula just fine. Also, why can’t Fury pick up and execute small enemies like her brothers? In fact, why can’t she execute much of anything at all? I think I counted less than five throughout the entire game.

At the end of the day, that’s the problem with Darksiders III in a nutshell. It’s a technical frickin’ mess (not that any of the previous games were necessarily stellar in the performance department) and it never fully commits to what it tries to do. Darksiders III is a return to form from the super ambitious and sprawling possibilities found in Darksiders II, going back to simply having a few forms and weapons. You don’t get set up builds, but Darksiders does better as God of War meets The Legend of Zelda or Metroid in my opinion. While it’s super dumbed down, it’s a welcome return to a time that’s less complex. It feels like a relic from the past, but I think there’s a bit of charm to it. 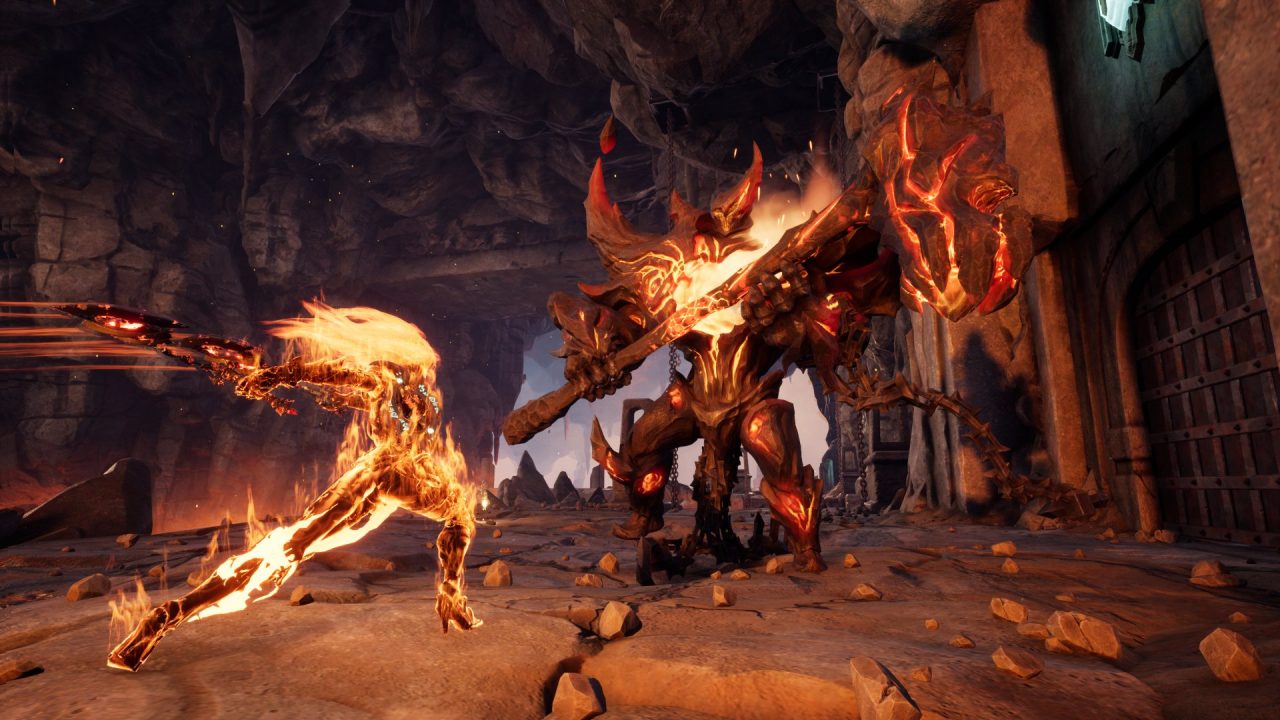 We haven’t seen a new Darksiders in six years, but there’s absolutely zero excuse for things that simply don’t work. I can forgive Darksiders III’s lack of a mini-map in favor of a compass that guides you from point to point. What I can’t forgive, is the checkpoints being awkwardly spaced and only seeming to be where a Vulgrim location is. I’m willing to overlook that Darksiders III is laid out more like Metroid than a Zelda. What isn’t excusable is the game never tells you when it’d be faster to use the serpent holes to get from point A to point B to advance the story.

The lack of more weapons in order to streamline combat is fine. That being said, I can’t absolve the game for running like they never had QA testing. Hitboxes, iframes, animation canceling, or literally any other modern game development choices could’ve easily improved the experience. I damn sure can’t forgive it for refusing to remind you to upgrade your weapons or pick up a helpful trinket for saving humans by going back to the Maker’s Forge. Darksiders III for feels more like the original, but that doesn’t excuse it for feeling like a buggy piece of Kickstarter backed trash that never got a full development cycle. 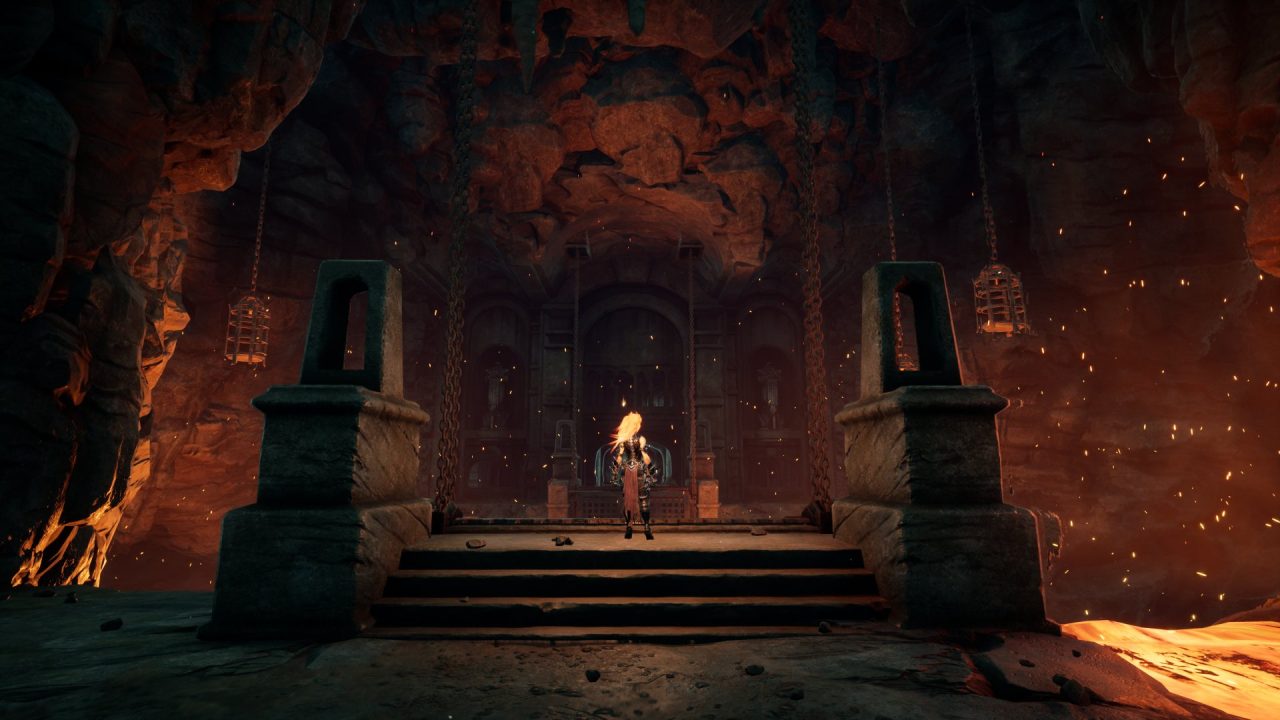 As I mentioned earlier, Fury manages to do what Kratos couldn’t. She realizes how blinded she is by her own desires, growing as a person during the course of the game. With each sin she encounters, she learns more about what may or may not be the truth. This is apparent from two very excellent scenes with Pride and an optional encounter with a demon named Abraxis. It’s truly a shame because the parts where the storytelling really shines in this game are the parts most people won’t ever see because of the technical issues that plague it.

Gunfire Games has already released two patches since launch, and from the looks of it, there’s bound to be more. While it’s playable and enjoyable, it’s marred by bad design choices. It’s already getting murdered critically because of how badly it performs. There’s no reason a $60 game should ever ask to turn off HDR because a day one patch removed text. That’s unacceptable, and while it was quickly patched, there’s still a plethora of stuff that needs to be fixed before this game gets the love it really deserves.

Darksiders III was reviewed on the PlayStation 4 Pro and was provided for review by THQ Nordic.