20 years ago, Insomniac Games brought perhaps the most prolific mascot of the PlayStation brand to the world. At least of course, one that wasn’t an orange marsupial. Spyro the Dragon was a hit among many, and despite the original trilogy’s success, his future wasn’t as bright. Thankfully, after the success of Crash Bandicoot N.Sane Trilogy last year, it was Spyro’s time to shine. Thanks to the efforts of Toys for Bob, the developers of Skylanders, Spyro is back in the Reignited Trilogy. The result is a wonderful update to a classic series that, despite some minor hiccups, proves to be a delight.

Structurally, each game in the trilogy is exactly the same as it was. While all the dialogue is exactly the same, the cinematography and delivery received a much-needed improvement. For example, in Spyro 1’s introductory cutscene, one of the elder dragons mocks Gnasty Gnorc on live television. Gnasty can be seen in his dark room watching the news report on TV, which was presented much differently in the original game. 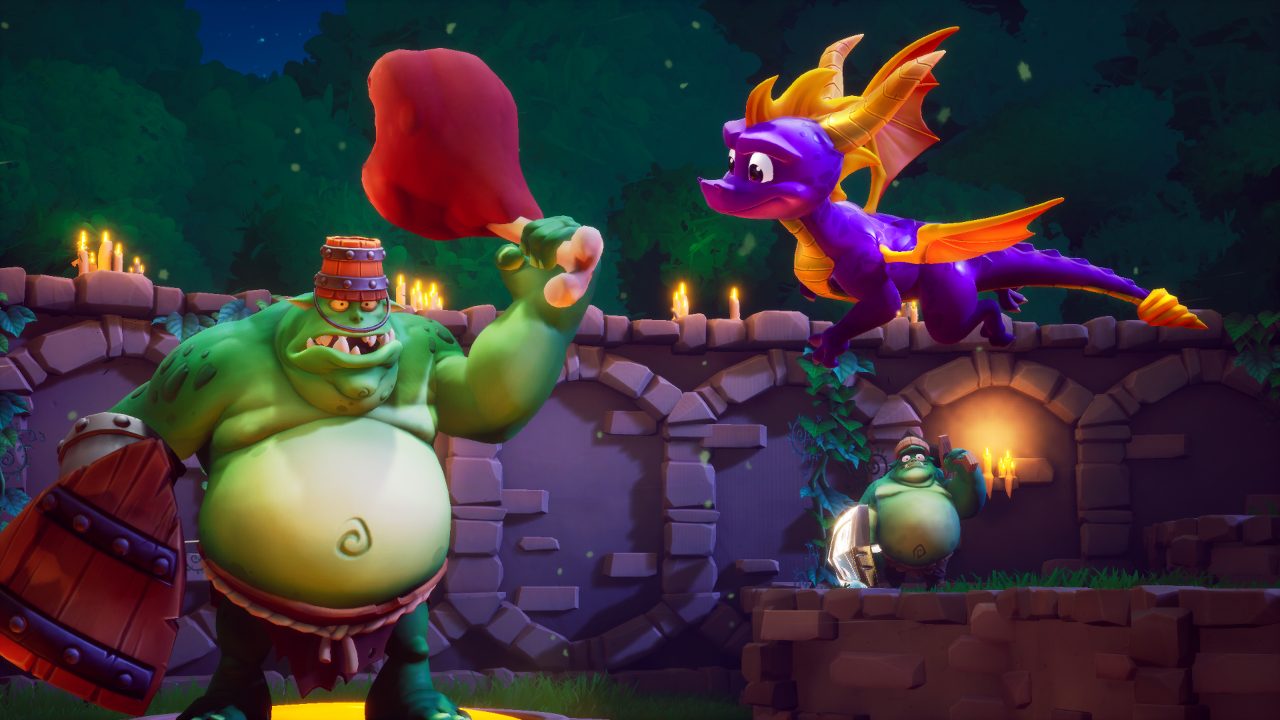 Speaking of the first game, it definitely benefits from the remake treatment the most. Not only is the voice acting far superior to the original, but every single dragon has his own unique design. Considering that there are just under 80 dragons to rescue, the fact each one looks vastly different is remarkable to the point that I actually wanted to know their backstory. However, the second and third games don’t exude similar charm. With Spyro 2, it’s known for having cutscenes before and after each level, detailing the conflict and the resolution. Considering how expressive the characters were in the first game, I wish the cartoonish Spyro 2 cutscenes would’ve had an even sharper comedic timing.

The most notable improvement of the Reignited Trilogy are the controls. In the original games, due to analog control being in a rather larval stage, Spyro’s movement was rigid and changing directions required making a full turn. However, in the updated games, Spyro’s controls are tight. Movement is smooth, and making harder jumps has become easier than ever.

Toys For Bob didn’t mess too much with the original design of the trilogy, and despite the shiny coat of paint, the layout is almost identical. They did, however, take some liberties in order to simplify the adventure. For example, the notorious level “Tree Tops” has been made far less frustrating. The two thieves you have to chase don’t require using the rather elaborate supercharge runways and instead run in a simple circuitous fashion. 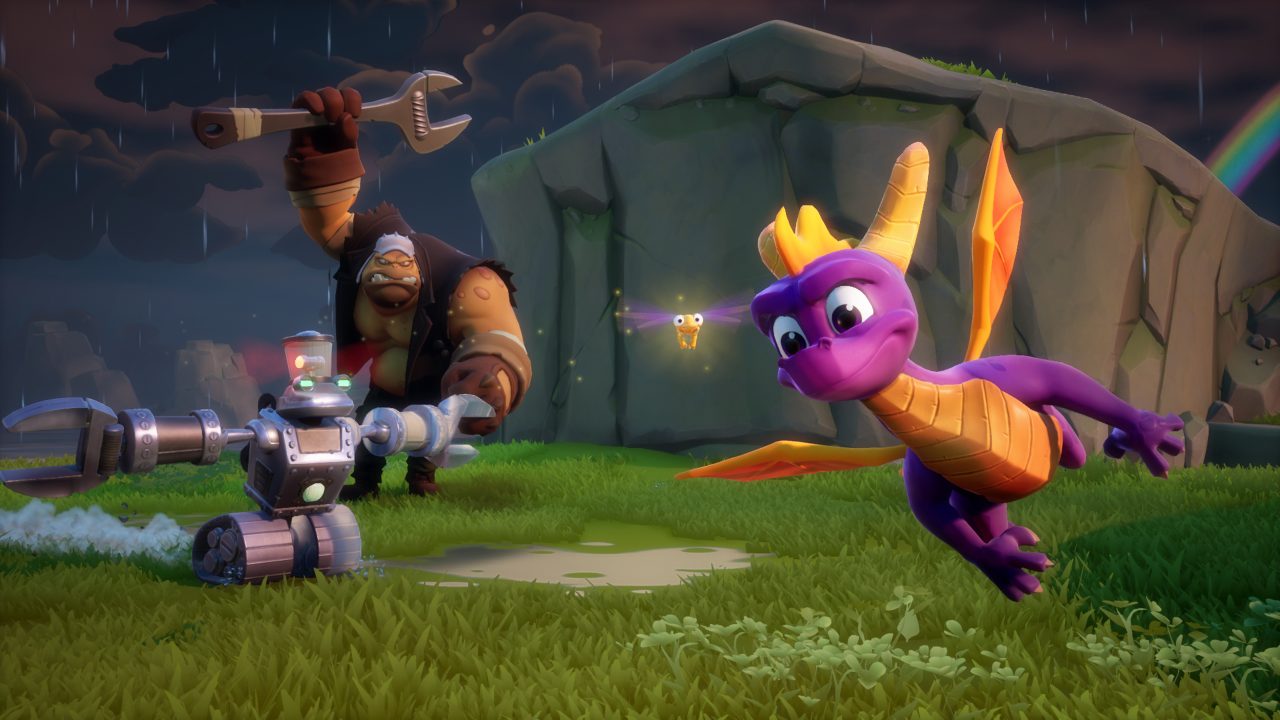 While there are notable improvements to the controls that take out some of the frustration, other parts don’t fare as well. Speedways, the flying levels in the series, tend to be very strict with their time limit on the first game exclusively, leaving very little room for error. As a whole, the first game in the series is probably the most polished of the three. Despite this, the boss battles of the first game remain as terrible as they were 20 years ago. Spyro 2 also fares well, especially with the way the new abilities such as swimming and climbing translate to this collection.

Things get more interesting with the third game, Year of the Dragon. This was perhaps the trickiest one to adapt since there are four additional new characters to play as besides Spyro. Fortunately, what once became many people’s biggest criticism has been mostly fixed. Sheila the Kangaroo’s jumps take a while to get used to, but she does cover slightly more distance than she used to, and her stomp attack is faster to execute. Sgt. Byrd moves far faster on the ground, and his directional speed is far greater. Bentley the Yeti is a tad faster, but he still remains the clunkiest character, if only due to the original design.

The biggest improvement is Agent 9. What was originally a very clunky and unresponsive shooting segment becomes a rather enjoyable third-person shooter with proper analog controls. Even Agent 9’s mission in Fireworks Factory, which was horribly frustrating in the original game, has become a rather engaging first-person shooting gallery. It’s a shame that despite the improvements to all the characters, they don’t get much use outside the obligatory mini-game. This was an issue in the original release that remains today. 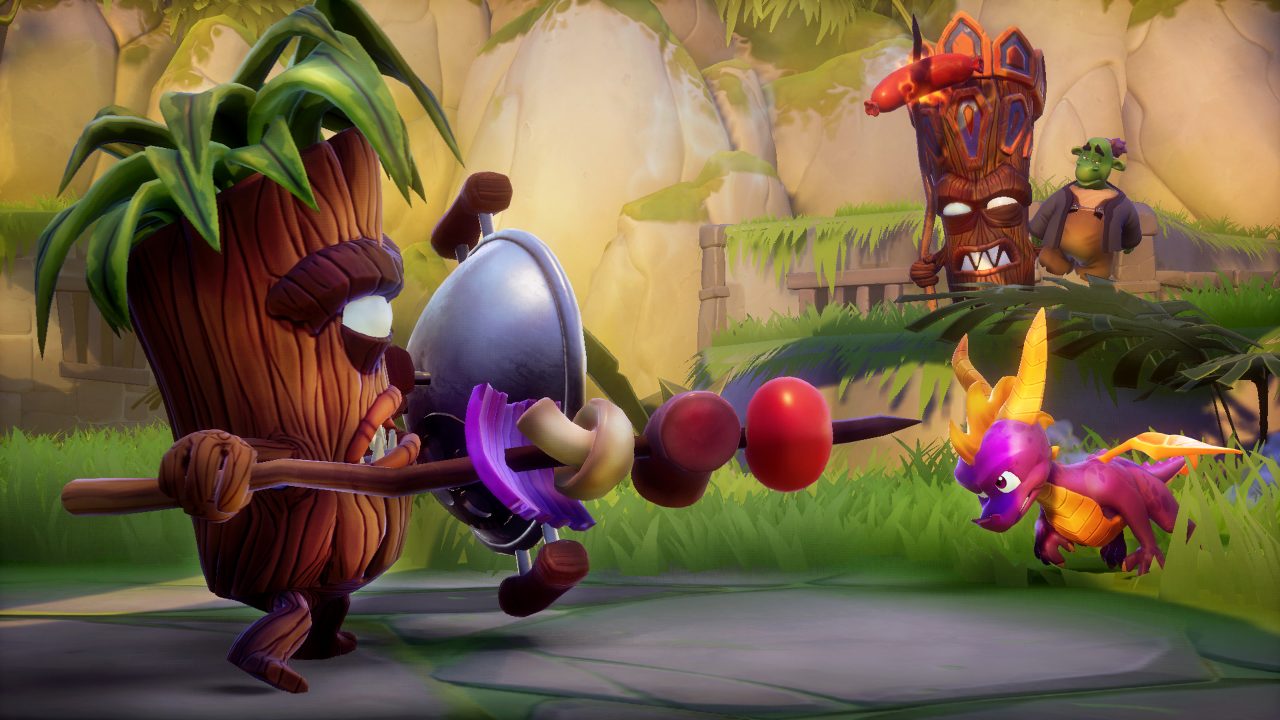 There is no denying that Spyro Reignited Trilogy looks absolutely spectacular. What used to be green polygons are now luscious fields of grass that Spyro can even singe with his fire breath. The lighting also give the world great depth, and some of the color palettes, especially in the later games, really shine. Spyro himself is perhaps the most impressive graphical feat. His movements are fluid and feline-like when he pounces forward, and his expressions during cutscenes make him more emotive than ever.

However, some of the graphical touch-ups come at a slight price. Due to how tall blades of grass are, it’s much harder to detect gems. In the older games, they would glow and have a distinct glint to them. While it is present in the remake, it’s much harder to see them with the graphical upgrade. Thankfully, Sparx the Dragonfly’s ability to detect gems (now included from the start in every game) is extremely helpful.

Speaking of Sparx, there are many issues regarding his behavior. When butterflies emerge from burnt critters, Sparx would automatically rush to eat them and regain a health point. In the remake, Spyro must be in the exact vicinity of the butterfly for Sparx to actually eat it. In addition, Sparx doesn’t automatically grab gems, and sometimes even if a gem is within grasp, he won’t budge. These are minor nitpicks since players can simply move to a gem or butterfly to collect it. Regardless, having Sparx do the work keeps the flow of the game going, and it’s rather jarring when it doesn’t happen. 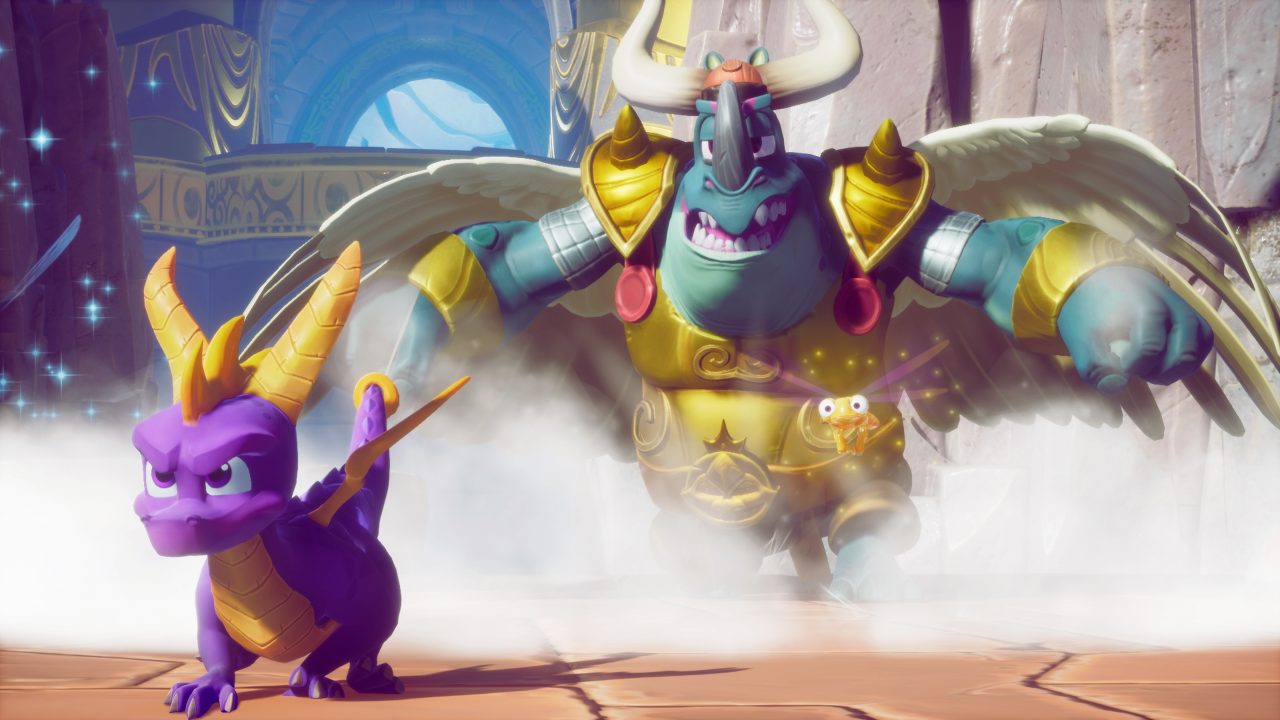 Speaking of the flow of the game, it really does have some hefty load times. While it’s understandable these more detailed worlds would require more time to load, it’s still disappointing. It’s truly a shame that every time you lose a life, the game has to take anywhere from five to fifteen seconds to load a checkpoint. It really breaks the pace.

Out of the three games, Year of the Dragon is probably the most disappointing. The last outing is riddled with a myriad of glitches. Snow sleds that get stuck on ramps, races against no one, unnatural lighting glitches, and more. Those issues can be easily patched in the future, but Spyro’s third adventure definitely needs the most cleanup.

A remaster to the soundtrack brings new life to the trilogy, and it even has dynamic features now. For example, if Spyro charges, there are galloping sounds.  If he swims, the track sounds more muted. A lot of the melodies have retained their original composition, but they now contain more modern instrumentation, which fits well. However, some tracks, like Agent 9’s Lab, feel rather hollow compared to Stewart Copeland’s original work. Thankfully, the game allows players to toggle between the Reignited soundtrack to the classic tunes. 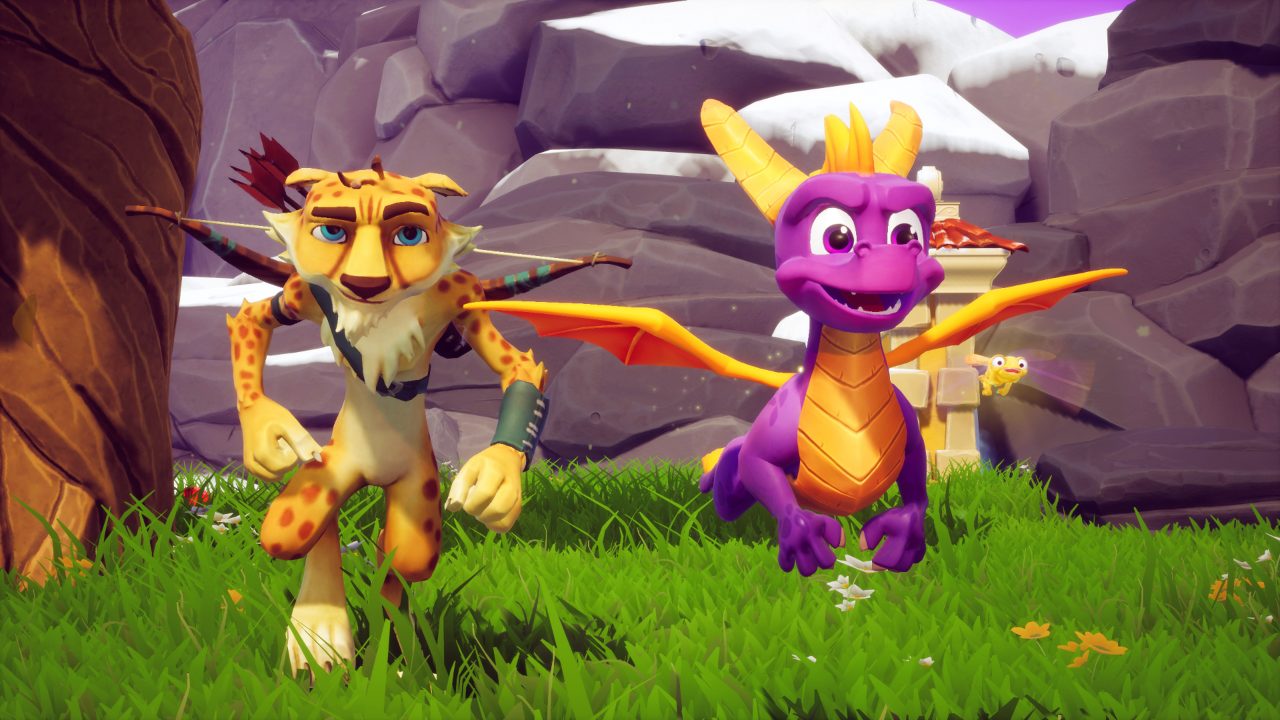 The voice work is also top-notch. The first game, in particular, is great since the dragons are no longer one-dimensional and show more quirky traits. It also helps that Tom Kenny, who voiced Spyro in the second and third games, now plays Spyro in the first game. Tom does a wonderful job with the original dialogue, bringing a consistency between the games. While it’s great to hear Gregg Berger voice Ripto again, it’s upsetting that he didn’t reprise the role of Hunter. Robbie Daymond does great portraying the overconfidence of the dopey cheetah, but loses a bit of Berger’s comedic charm. At the end of the day, despite not sounding like the original cast, the new talent does a good job. Also, Moneybags is still a greedy bastard, and I wouldn’t want him any other way.

Admittedly, bringing Spyro back into the spotlight after so many years with such great fidelity must’ve been a difficult task. Thankfully, the development teams, headed by Toys for Bob, have great at bringing all those classic games back with modern updates that still retain Insomniac’s exquisite design. While there are some slight issues, the developers can easily tweak them. Having such a great collection of games for an affordable price is definitely one good reason why Spyro Reignited Trilogy is the best gem a dragon can collect.