SHONEN JUMP’s newest hit, My Hero Academia, has been sweeping the world by storm. Considering the insane popularity of its anime adaptation, a video game tie-in was inevitable. Bandai Namco’s My Hero’s One Jusitce pits our young heroes (and villains) in a brand new arena fighter. While the series catchphrase has always been to go beyond, aka “Plus Ultra”, it is more of a serviceable distraction than anything else.

One’s Justice is an open arena 3D fighter in which two characters battle it out until one’s HP is depleted. Like most in the genre, linking up combos is as simple as pressing a single button repeatedly. That being said, the system does still have some variation. For example if an enemy blocks combos regularly, an unblockable attack can break his or her defenses. While each character has a meager moveset of a little over ten attacks, it does make the game easy to grasp for those new to the genre. 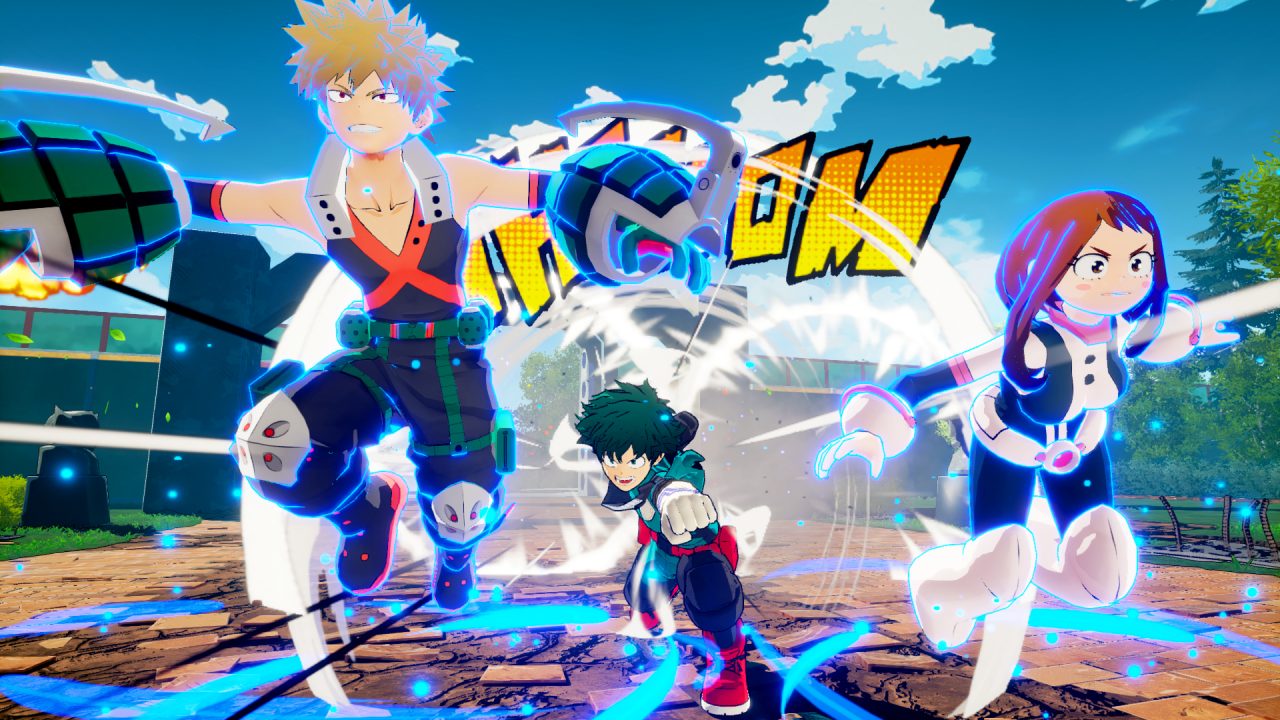 That being said, the main drawing point isn’t just the regular attacks, but the special ones. Each character in My Hero has their own quirk, a special power that can assist them in battle. Tokoyami can summon a sentient shadow creature to help him attack enemies from a safe distance. Yaoyorozu can create stun bombs that stop enemies in place, and so forth. Some quirks fair better than others, and even those who have generic ones that boost strength like All Might have some neat moves like a barrage of punches.

Despite the inherit simplicity of the combat system, the battles in the game are incredibly flashy. A lot of the attacks feature anime-style speed lines and even comic-book words that pop-out to illustrate sound effects. If two characters happen to perform a combo simultaneously, an epic clash will occur. When this happens, two characters will quickly trade punches, leaving only the faster button masher to prevail. It’s also possible to face-plant an enemy into a wall, making it easy to exploit the situation. 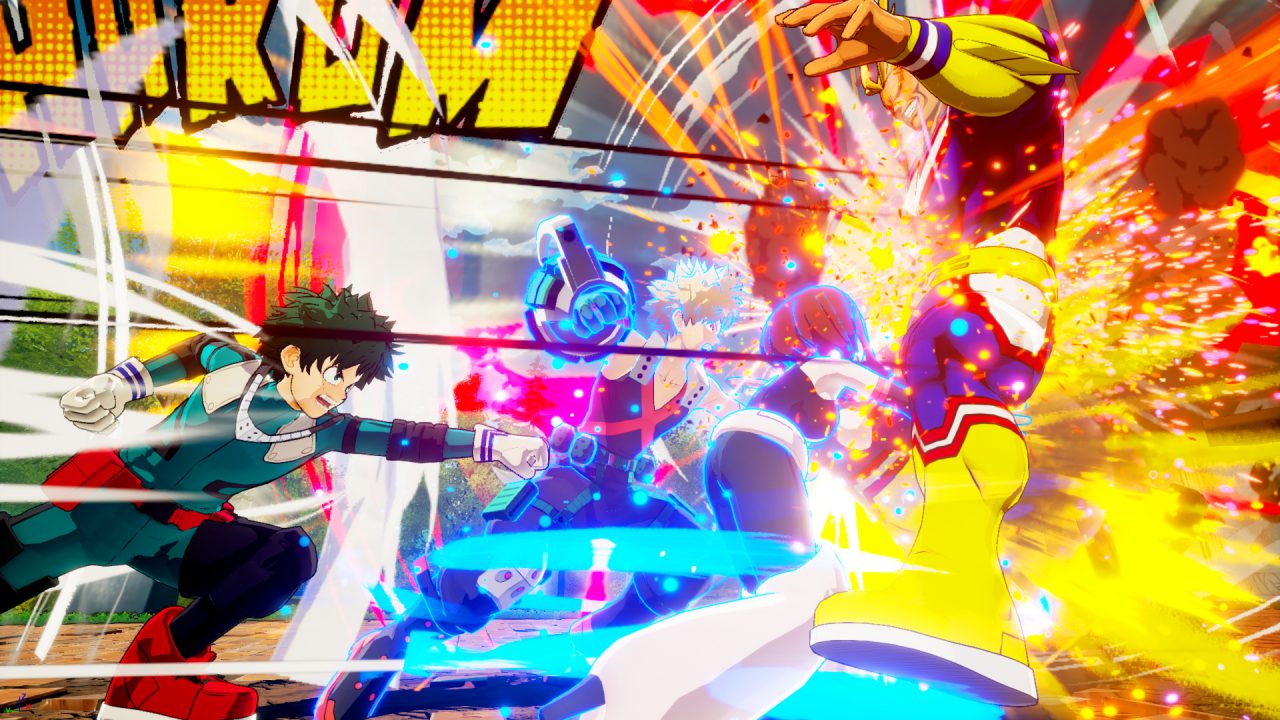 Players can also use two sidekicks that can be summoned to use their respective quirk to assist in the middle of a battle once their gauge fills up. Each character also has their own Plus Ultra gauge with three levels, and several special attacks that can be performed. The level one attacks are usually a quick and effective way to get the upper hand. Level two attacks can be glamorous finishing moves that can end a fight decisively. The strongest are the level three attacks, since the sidekicks step in to help, but they are the hardest to execute since they often miss and it takes a while to fill the gauge in the first place.

The game features a summarized story mode that retells the events from the anime at the midpoint of season two to the midpoint of season three. The plot is told via comic book panels combined with narration from the various characters of the game. While the Japanese cast does a great job as always, unfortunately fans of the dub will be saddened at the lack of an English track option. 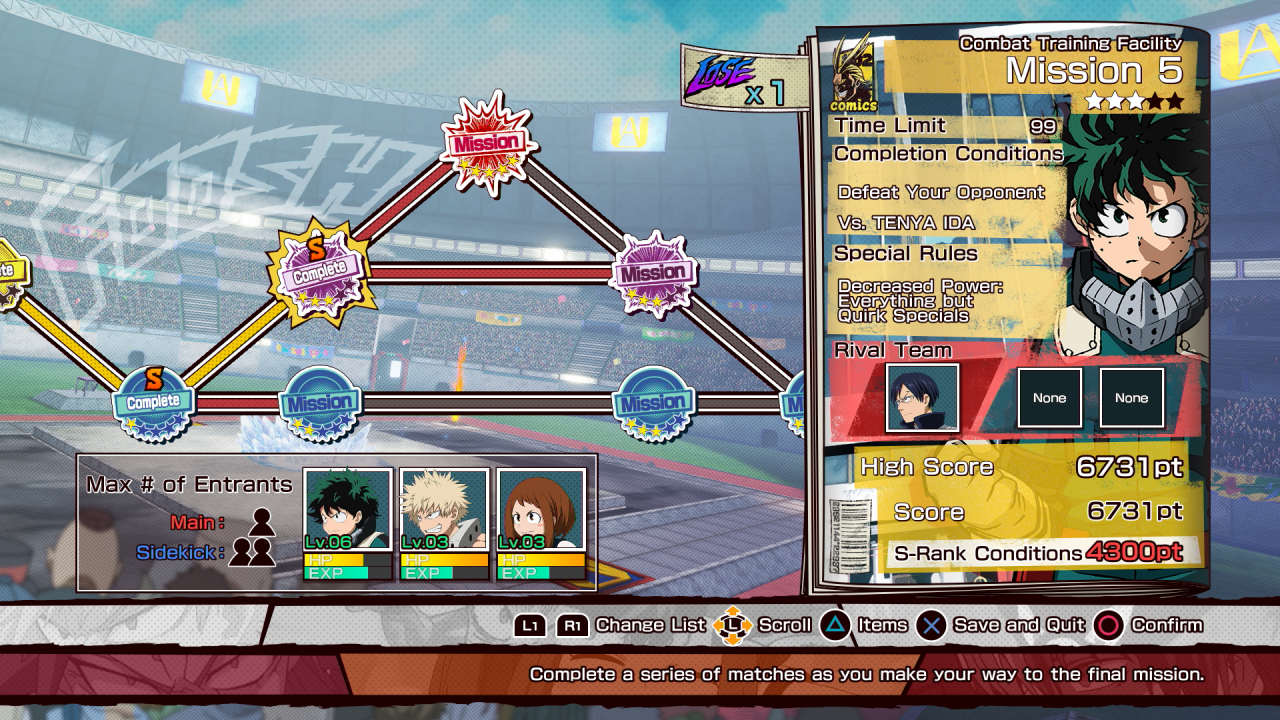 The biggest problem with the story is that it starts it the middle of the narrative. This alienates newcomers to the franchise, with little to no context to the prior events of the story. In addition, while it’s nice playing as multiple characters throughout the story, there’s moments where one character has to fight the same enemy repeatedly. This creates a grind-like experience and hurts the pacing. The best chapters by far are the “what-if” scenarios that take place outside of the story’s canon. It lets characters that otherwise gets no screen time in the story a chance to shine. While there are different paths of the story mode and some little surprises, the haphazard storytelling and tedious progression make it more of a drag.

Mission mode fares a tad better. Players choose three characters that must complete challenges in the form of a boardgame like map. Battles also might have some unique conditions such as limited time, or enemies having boosted defense. The catch is that HP doesn’t replenish after each battle, making it like a survival mode. Despite this, there are some items that assist with recovery at the cost of score points. Each victory grants characters experience points that allows them to level up and become stronger. This may sound good on paper, but later challenges can be ridiculously difficult. It gets to a point where players must grind completed missions just to stand a chance at the later challenges. 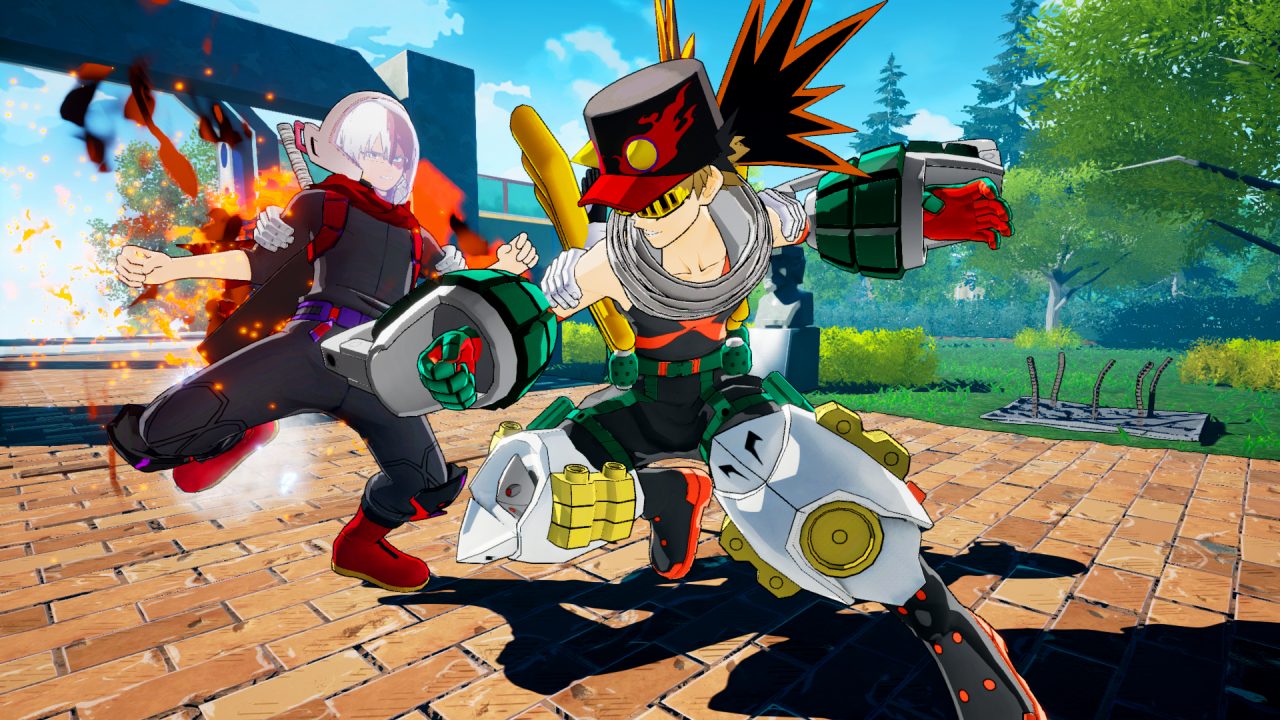 Another neat distraction is the character customization feature. While you can’t create your own character, it is neat to dress up your favorite hero with a selection of offbeat knick-knacks or unique outfits. A lot of the items must be unlocked by meeting certain conditions throughout the game’s modes. In addition, winning battles grant coins, allowing players to buy items and other things such as voice clips or custom titles for online play.

Graphically the game definitely captures the show’s spirit. Characters look faithful and their animation is spot-on, even if there are some anomalies. For example, Bakugo and Kaminari’s hair tend to be a tad darker when the camera zooms out. Fairing much worse, sadly, are the environments. They all lack detail in their textures and feel so simple that they start to blend together. Luckily, the game runs smoothly with little to no frame drops, keeping the action fluid and exciting. 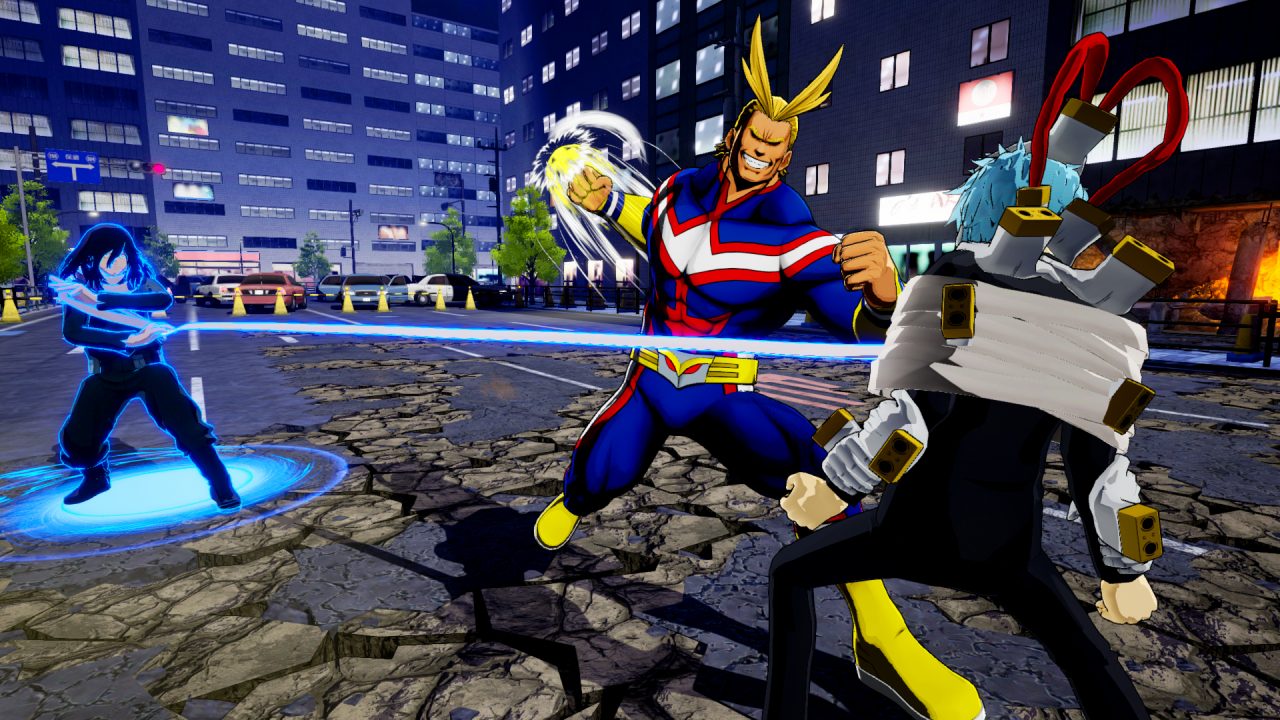 My Hero One’s Justice is a game for fans of the show. While this statement might seem obvious, it’s important to note because the story alienates newcomers. It basically assumes players have watched at least 26 episodes of the source material. It’s a shame because the combat is very accessible. Even if it’s not that complex or the most polished, the fast pace and lavish moves makes it entertaining. At the end of the day, those expecting a game to be on the caliber of “All Might”, might get a game that is actually more “all right”.