In a world of fighting games, there are many that have their own unique qualities. Whether it’s 2D or 3D, sometimes it takes using these unique features to stand out. While Bandai Namco has one of the top 3D fighters with the Tekken series, it isn’t their only one. The SoulCalibur series has just as extensive a history as Tekken, but differentiates itself with its weapon-based combat. It’s been a while since the last entry, but Bandai Namco brought the series back with plenty of gusto with SoulCalibur VI. Does it have what it takes to compete against the other fighting games this generation? 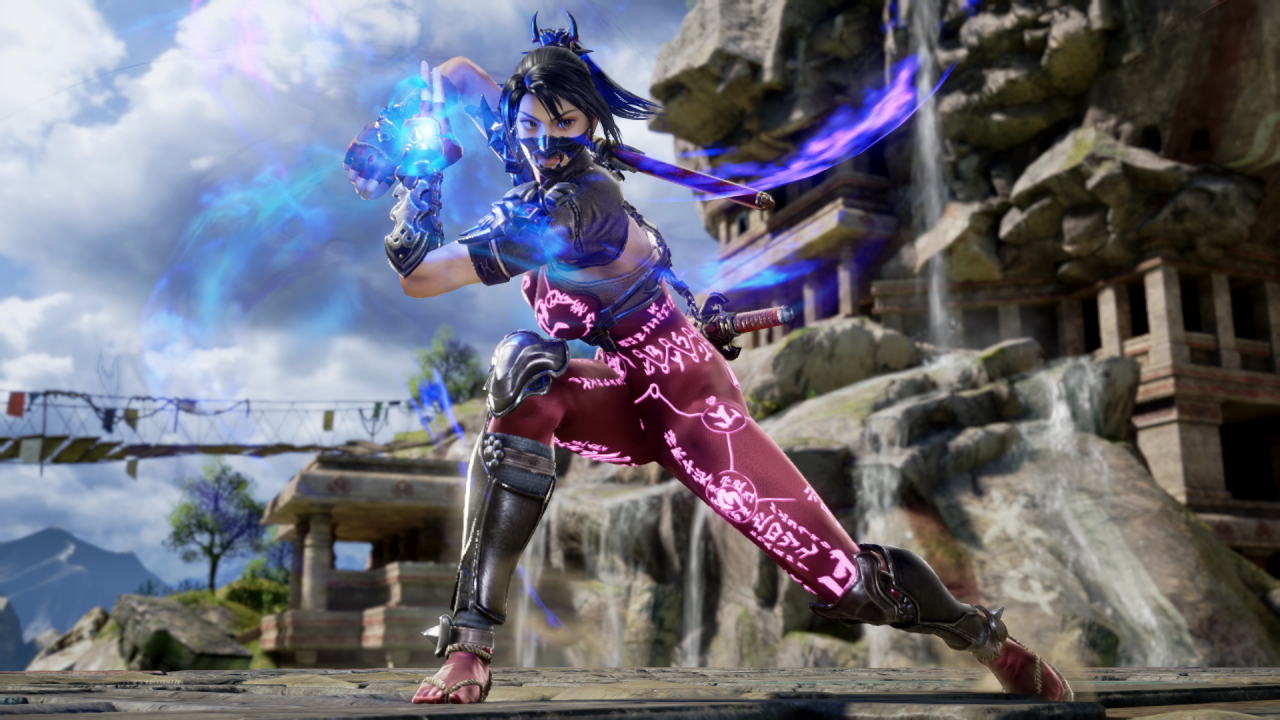 The story of SoulCalibur has a pretty extensive lore, but SoulCalibur VI decided to do a soft reboot to it all. Going back towards the beginning, we have a new story that rewrites the history of the 16th century. Adding characters that were introduced later in the series, the game adds new elements to the story. After taking a step into the 17th century in SoulCalibur V, it was time to return to a more familiar era for the series. This means a lot of fan favorites that were missing in the last entry return, with only a couple new faces.

There are two story modes in SoulCalibur VI. The first one is Soul Chronicle, which serves as a sort of main story for the game. Focusing mostly on Kilik, this story centers around his journey to defeat the spirit of Soul Edge. On top of the main story are individual arcs for each of the other characters on the roster. While much shorter, they add a bit of extra depth to the overall plot and add quite a bit of lore. One thing that is nice about this is that playing one story can unlock hidden records in another. So even if you played one story, you might still unlock other details by playing another. While not a “cinematic” story mode, Soul Chronicle does well to convey this new timeline for the series. 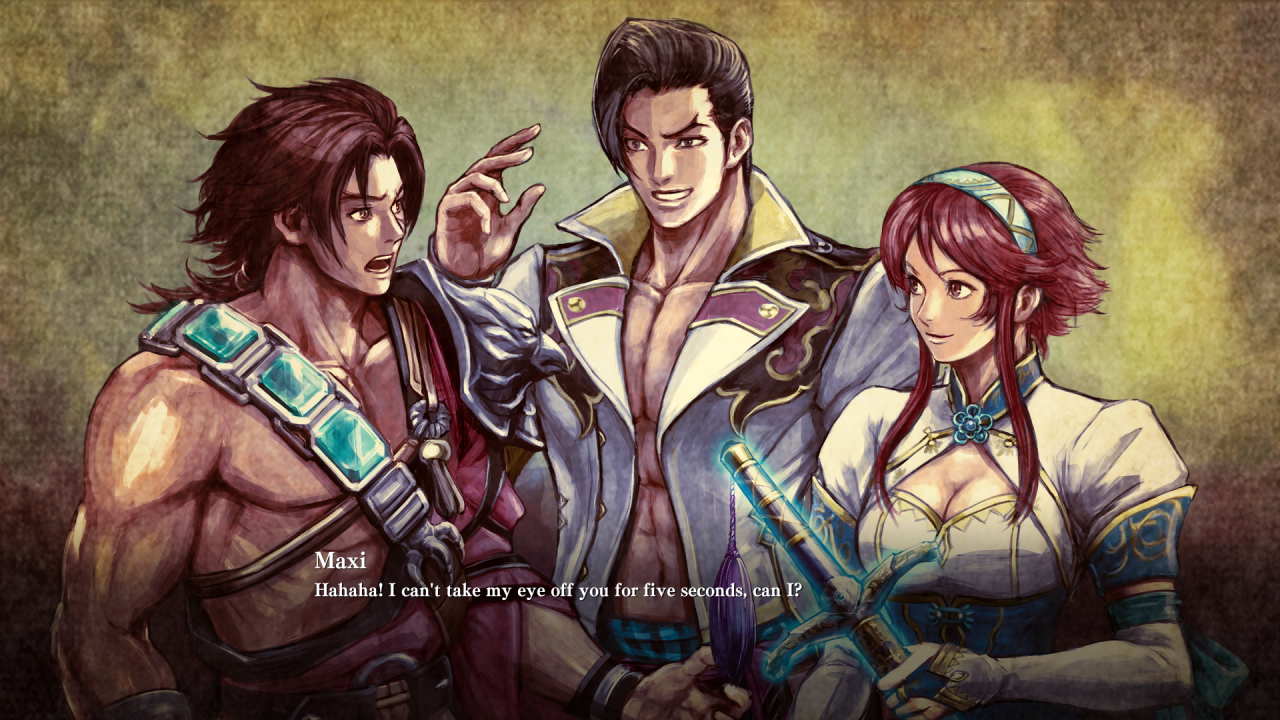 The second story mode is the Libra of Soul mode, which acts more like an RPG. Players will create their own character to set off on a journey where they balance good and evil within themselves. Absorbing energy from mysterious astral fissures, the player will roam parts of Asia, Europe and Africa on their quest. Several main characters will be met along the journey, as well as even more NPCs that will guide you. Several battles with various conditions await, but also with plenty of rewards. Libra of Soul adds a certain level of player progression that provides hours of gameplay, with just enough challenge for veterans.

Both of the story modes provide plenty of single player content, but they suffer a bit in the presentation. Soul Chronicle is the better of the two, with fully voiced dialogue and beautiful artwork to represent the characters. Unfortunately, Libra of Soul removes the fully voiced dialogue, likely due to the large amount of characters. Various cutscenes appear in the mix of both modes, but they can be very few and far between. It’s a minor thing, but the game makes up for it with the overall quality. 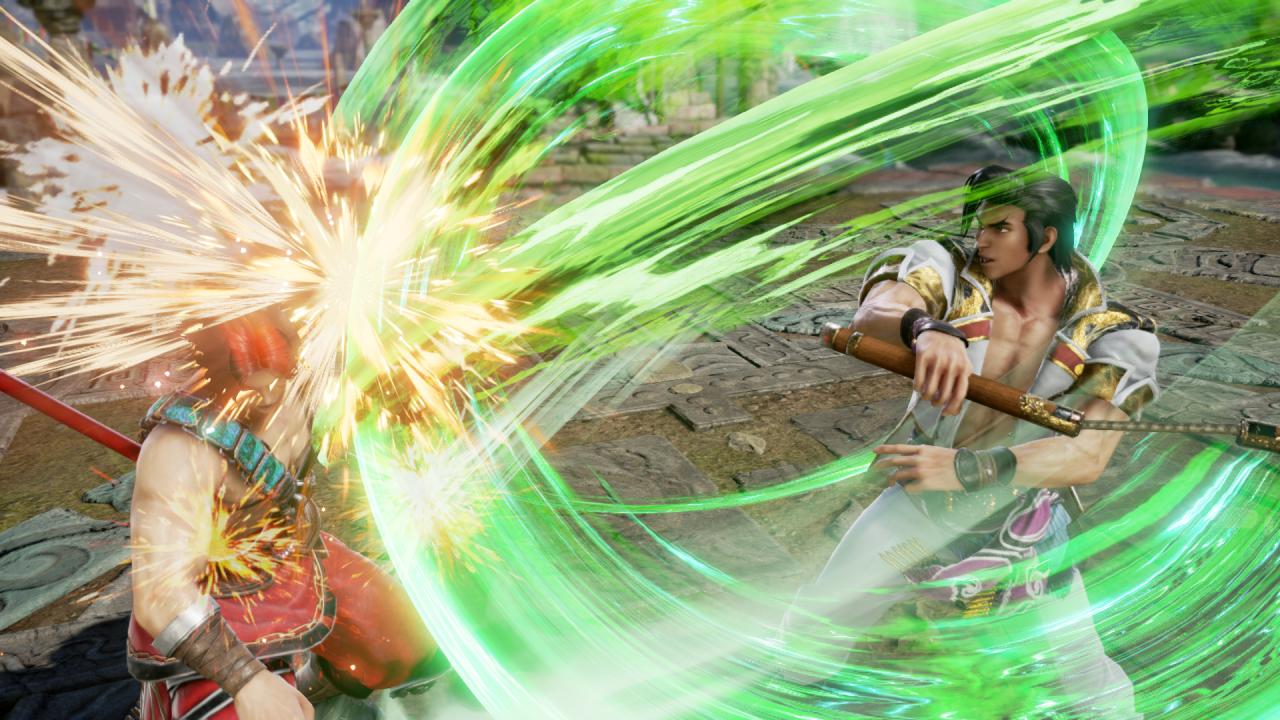 Graphically, SoulCalibur VI does well to improve on the visuals from SoulCalibur V. While not exactly earth-shattering, there is a lot of details maintained in both environments and character models. It’s quite possible the visuals could be pushed further, but that might sacrifice the silky smooth performance of the game. The moves are even flashier and quite a bit faster this time around, so SoulCalibur VI puts on quite a show.

The fighting mechanics seem like a nice step up from the last entry. One of the flashier new elements is the Reversal Edge, allowing a player to enter a sequence where both fighters input a command in the style of Rock-Paper-Scissors. Movement slows down, similar to the slow-motion mechanic in Tekken 7, only for the fighters to clash towards victory. In the event of a tie, one fighter can initiate a special attack in the second clash. It’s a great looking feature and it makes fights a lot more exciting, which will be a treat for tournaments. 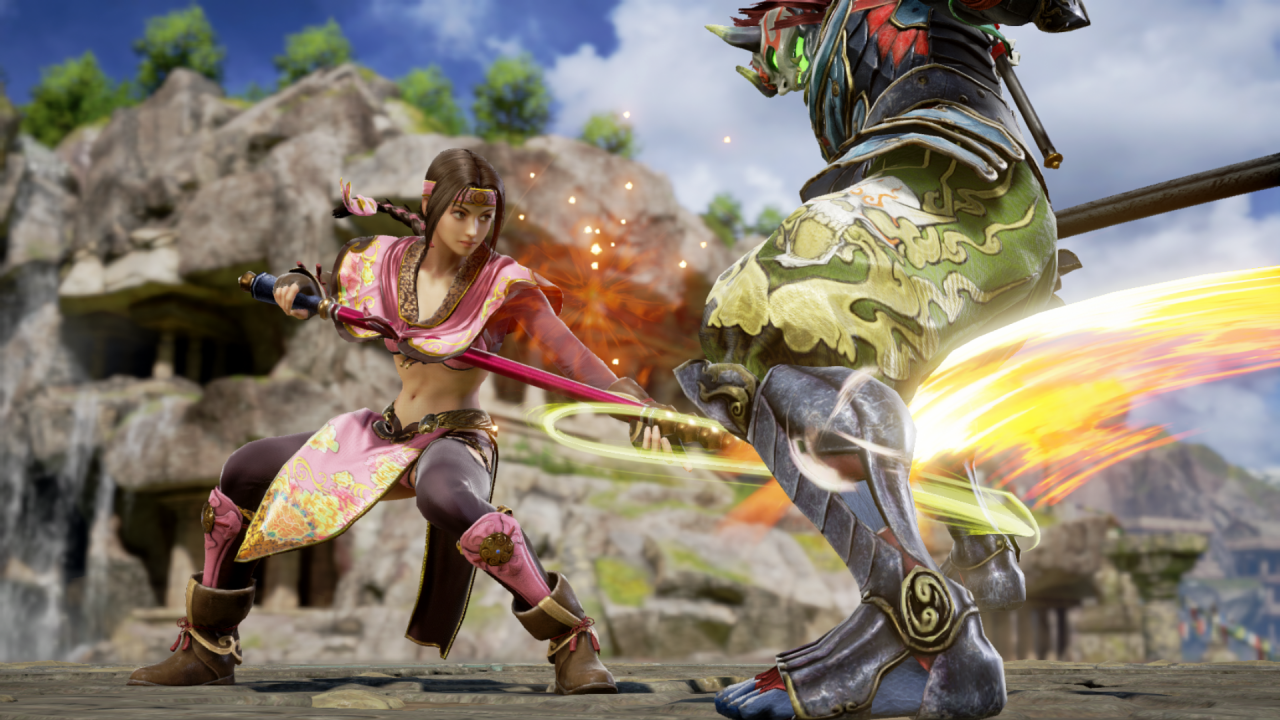 The Lethal Hit mechanic is a powerful attack based on timing. If executed properly, players can break armor, stun opponents longer, or even launch them to create spectacle. Breaking armor is a returning mechanic, and it remains to be a satisfying feeling of accomplishment. Another visual treat that returns is the Critical Edge, a powerful move that uses one bar of the soul gauge. That same soul gauge also contributes to the updated Soul Charge, which powers up characters, potentially unlocking new abilities as well. It all creates an engaging set of combat mechanics that make fights a thrill to be a part of.

Speaking on a point from Libra of Soul, the character creator returns from previous entries in the series. Fans can customize their favorite fighters or even create all new ones based on them to match their personal tastes. While some might create original characters, others might take the opportunity to create existing characters. In my own game, I made a rendition of the internet trending Bowsette, even sharing her for others to download. The amount of options is pretty staggering, even allowing customization of patterns and markings. It might be safe to say that SoulCalibur VI has the deepest character creator in a fighting game yet. 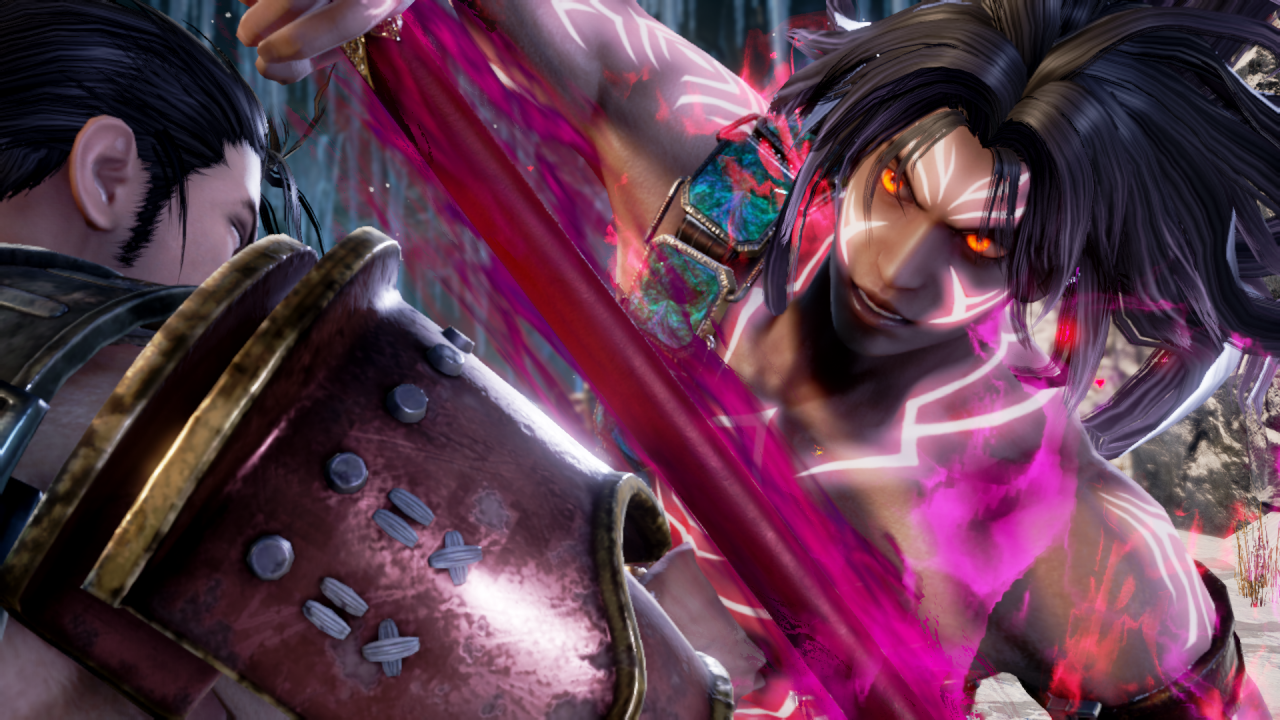 When it comes to online multiplayer, SoulCalibur VI keeps it pretty simple. With ranked matches and casual matches, players can choose to compete or simply have fun. Casual matches allow for players to create a lobby for friends or random players to join, battle and spectate. Ranked matches work like one would expect, as players are matched up in standardized rules. When a player wins, a rematch can be requested for a two out of three style match. Players will be rewarded with Soul Points which can then be spent on character creation items, gallery content, or even exchanged for gold to use in Libra of Soul. Overall, the online feels solid, with very little input delay if any in my experience. Lag was barely an issue and matchmaking became more consistent closer to the launch.

It’s worth mentioning the roster of this game, as it’s always an important factor of a fighting game of this caliber. 21 playable launch fighters makes this roster a bit smaller than the previous three entries. With a season pass and Tira available day one, it feels a little lacking in this department. It makes matters a bit worse considering Tira appears in Libra of Soul and Arcade mode even when you don’t own her. While the roster has good variety, it feels a little underwhelming when compared to previous entries. At least Geralt from The Witcher series is a welcome guest and he fits in perfectly among the cast. His rivalry with Mitsurugi is one of the many highlights of the game. 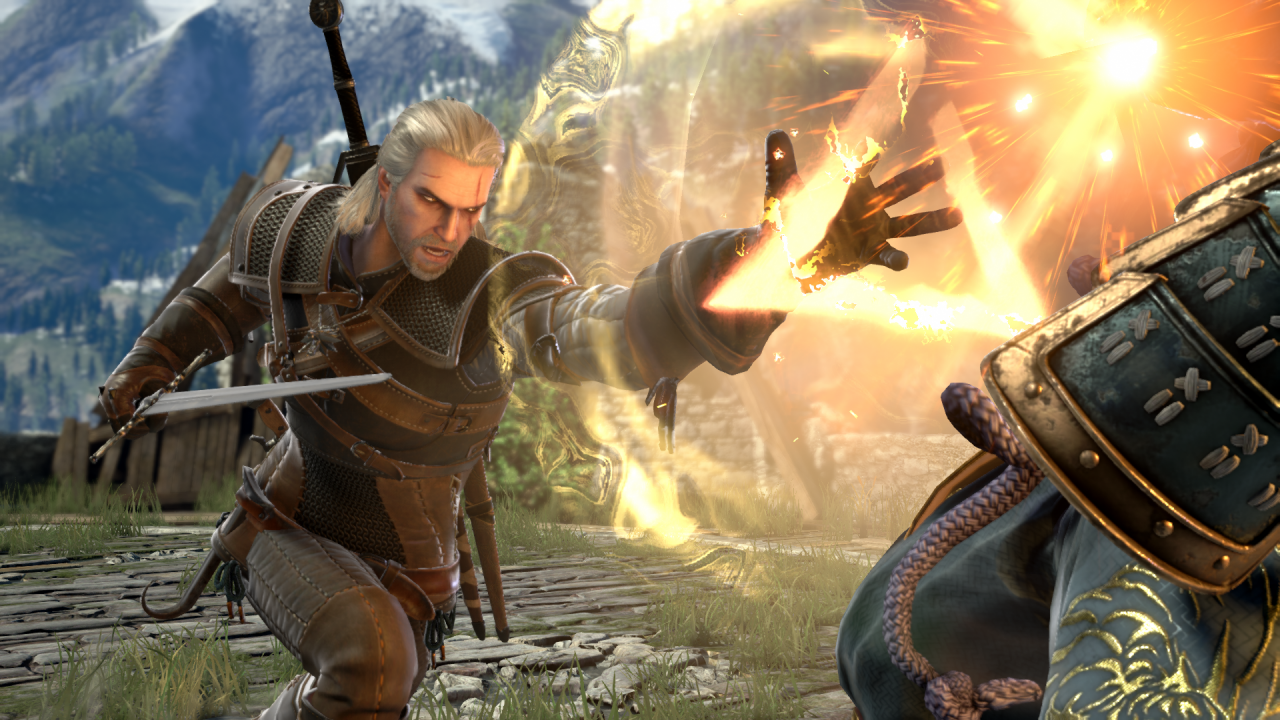 Despite the smaller roster and the minor presentation flaws, SoulCalibur VI is a brilliant fighter. The mechanics are deep enough for veterans to enjoy and the content is rich enough for casual fans. It seems that the game will likely be a huge hit at tournaments and will hopefully gain a bigger following. Bandai Namco has another hit on their hands and it’s likely that we can see plenty of support for this title. As flashy and gorgeous as ever, SoulCalibur VI is ready to retell a tale of souls and swords for another eternity.