After eight years of hibernation, Mega Man has finally returned with his eleventh installment. A lot is riding on the newest title, especially after one of his original creators, Keiji Inafune, had less than stellar results with his pseudo-successor, Mighty No. 9. Despite many doubts with the transition from the classic 8-bit style graphics to the modern cel-shaded aesthetic, Mega Man 11 proves to be a much more solid experience. That being said, it isn’t without its flaws.

The plot is as goofy as it should be. Back when Dr. Light and Dr. Wily were young scientists, they both pitched their respective projects to the head committee. While Light’s project gets accepted, Wily’s does not. Believing his Double Gear is far superior to simply granting robots free will, Wily swears revenge on Light. Fast-forward to the present, Wily remembers his old project out of nowhere and decides to rebuild it. He uses it on eight robots to test the Blue Bomber in his latest scheme. While it is nice to see a bit of backstory to the history of the rival doctors, it’s still silly and nonsensical. Regardless, it at least has fun with itself. 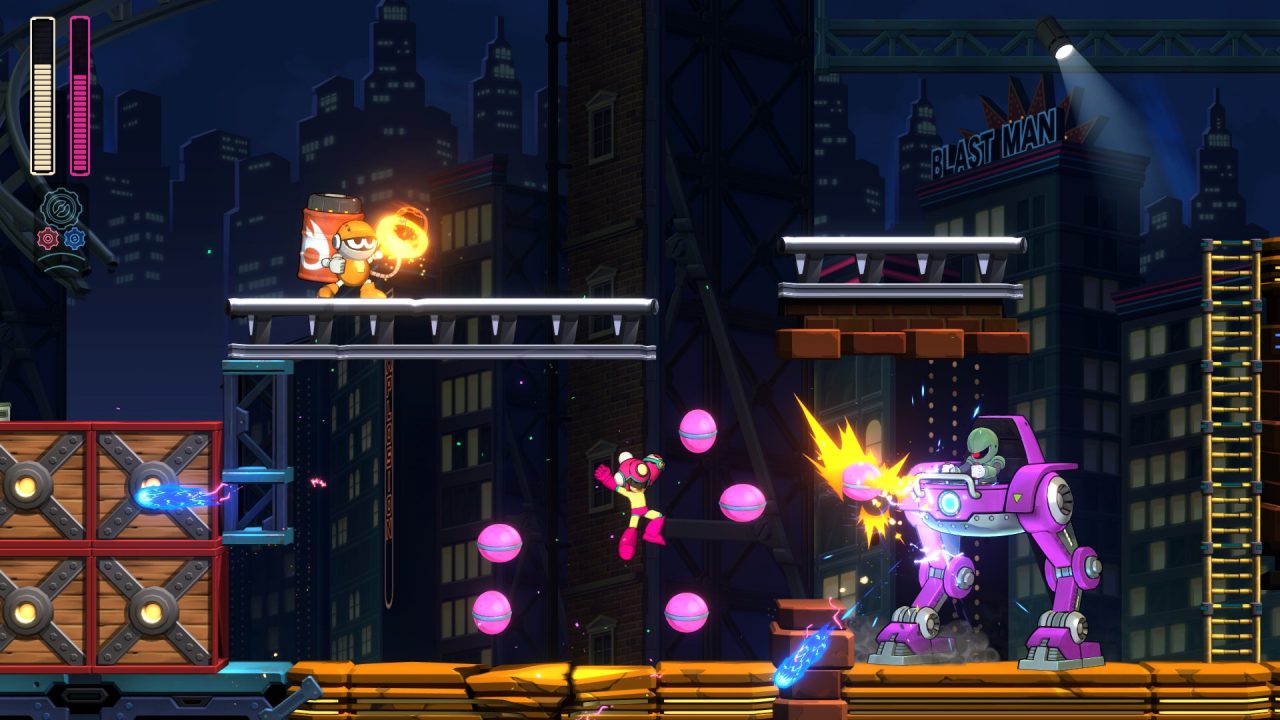 The gist with Mega Man 11 is what would one expect. There are eight robot masters who need to be defeated one by one to gain their respective powers.  After all eight are defeated it’s time for the showdown against the maniacal mustached doctor. It’s a familiar road to trudge along, but it’s a formula that still works and gives players the agency to choose the way they want to play. Mega Man can not only jump and use his trusty mega buster as his primary attack, but for the first time since Mega Man 8, his slide and charge shot also return to his repertoire. While it a shame those abilities were omitted back in the day in favor of implementing them into DLC characters, it’s nice to have a complete Mega Man again.

The newest gimmick is the Double Gear system. By pressing either shoulder button Mega Man can either increase his attack power significantly or slow time considerably. However, in order to keep our Blue Bomber from becoming an unstoppable force, the system has a limited usage, needing to cool off after activation. If the player reaches the power limit, Mega Man temporarily loses the ability to use it. This means that time can’t be slowed down indefinitely, and it’s key to know when to use it. If you get hurt, for example, slowing time means the staggering period will last even longer, therefore wasting more energy. 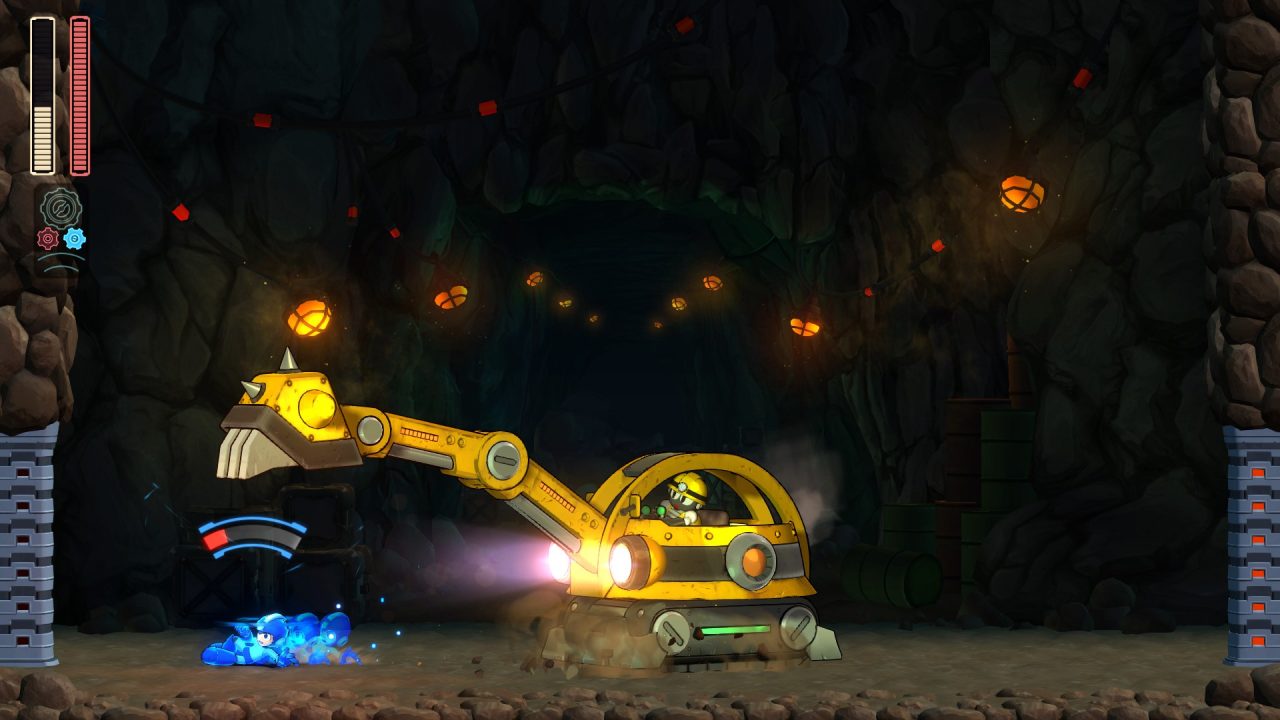 While the Speed Gear can be essential for split second reactions, the same can’t be said about the Power Gear. Using it with the regular buster makes the shots stronger, but not enough to make a difference. It’s more cost effective to use regular shots without wasting energy and save it towards slowing time. A charged shot using Power Gear can be devastating, but the small window of timing rarely makes it effective. At least every subweapon can be enhanced thanks to this gear, even if it does drain your ammo much faster.

The levels themselves are cut from the same cloth of the games of yesteryear despite the shiny coat of paint. While some levels are more traditional, like an underground construction facility or an arctic paradise, some do stand out. Blast Man’s movie set for example might be one of the coolest levels in the series. Not all levels are created equal, as Bounce Man’s level consists of of balloons to bounce from. It made it rather difficult to be precise when Mega Man is bounced in different directions. 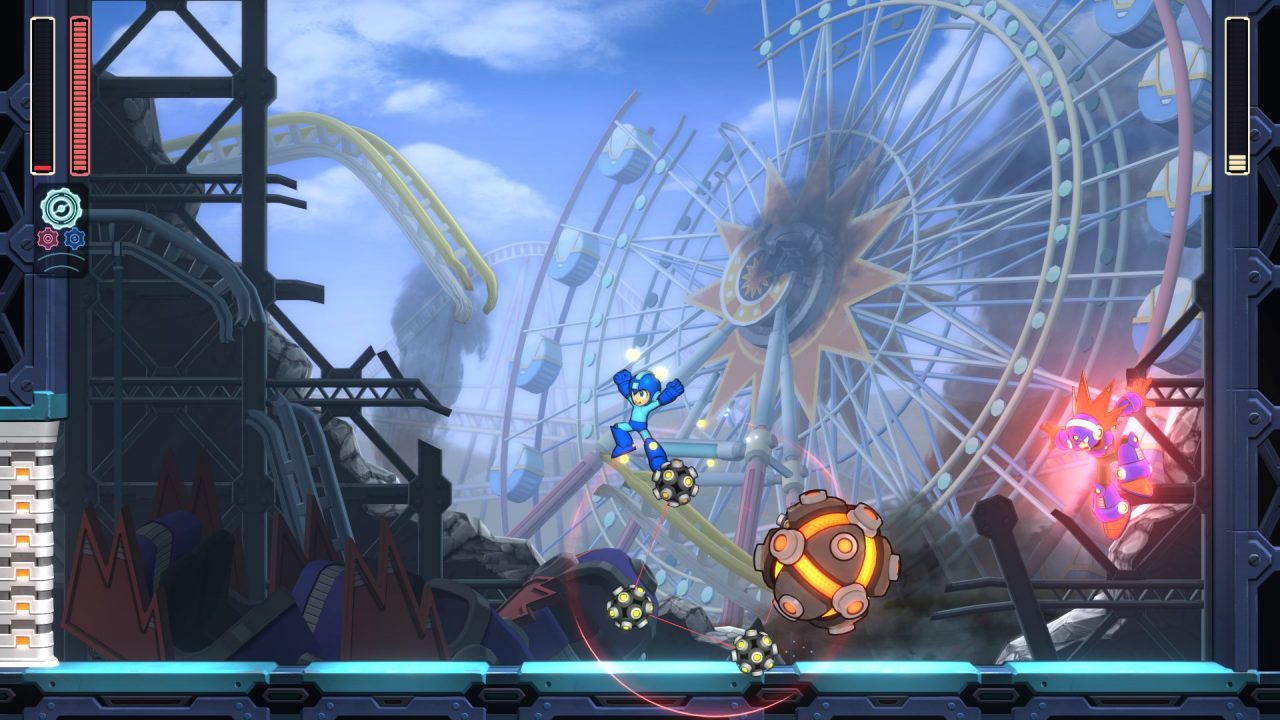 While there’s lots of unique gimmicks in the levels themselves, there’s no denying that Mega Man 11 is incredibly challenging. If you expect the Speed Gear to make things easier going in, it’ll just be a recipe for disaster. Block Man and Impact Man’s stages for example barrage players with ample difficult to avoid projectiles. Not only that, but with a longer stagger, Mega Man can freeze in place and be vulnerable, or fall to a bottomless pit.

As someone with plenty of Mega Man experience, 11 is the only game in the series to make bolts worthwhile. I felt I had to spend the bolts I collected just to see myself to the end of normal difficulty. The bolt shop returns with Mega Man 11, bringing a lot more benefits this time around. In addition to buying extra lives or energy tanks, there are also new equippable items. Examples range from items that increase health drops or even a device that speeds up the gear cooldowns. 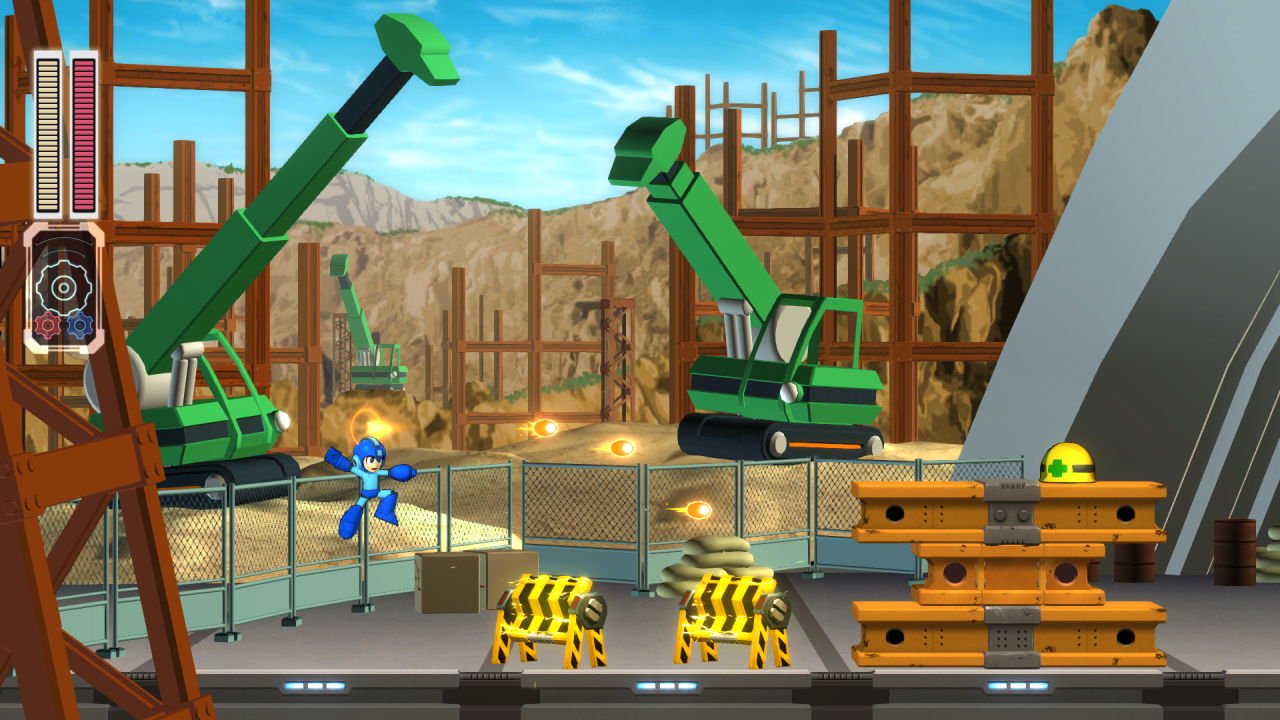 The beauty of the Mega Man series is that even when you do have all those unique tools to finish a stage, the game can still be tackled using just the mega buster. With 11, however, there are many moments where players have to use a specific weapon. Not doing so can risk potentially losing a life or stage progress. While the game itself has less levels overall, the levels themselves are probably the longest yet. To add insult to injury, the checkpoints can be few and far between. Thankfully there are multiple difficulties, especially newcomer and casual, for those who are deterred by the difficulty. Even I personally found the normal difficulty mode to be downright punishing.

The robot masters of Mega Man 11 are actually pretty cool despite treading on familiar tropes. Tundra Man may look like another rendition of the ice boss, but his figure skating motif alongside his lavish attitude makes him a delight. More importantly, Wily has installed the Double Gear system in each of the eight robots. This means they will either increase speed or power to change up the traditional boss patterns. I’d actually say that the bosses are far more fun than the stages this time around. The issue with them, however, revolves more around lackluster weaponry than making the AI unfair. 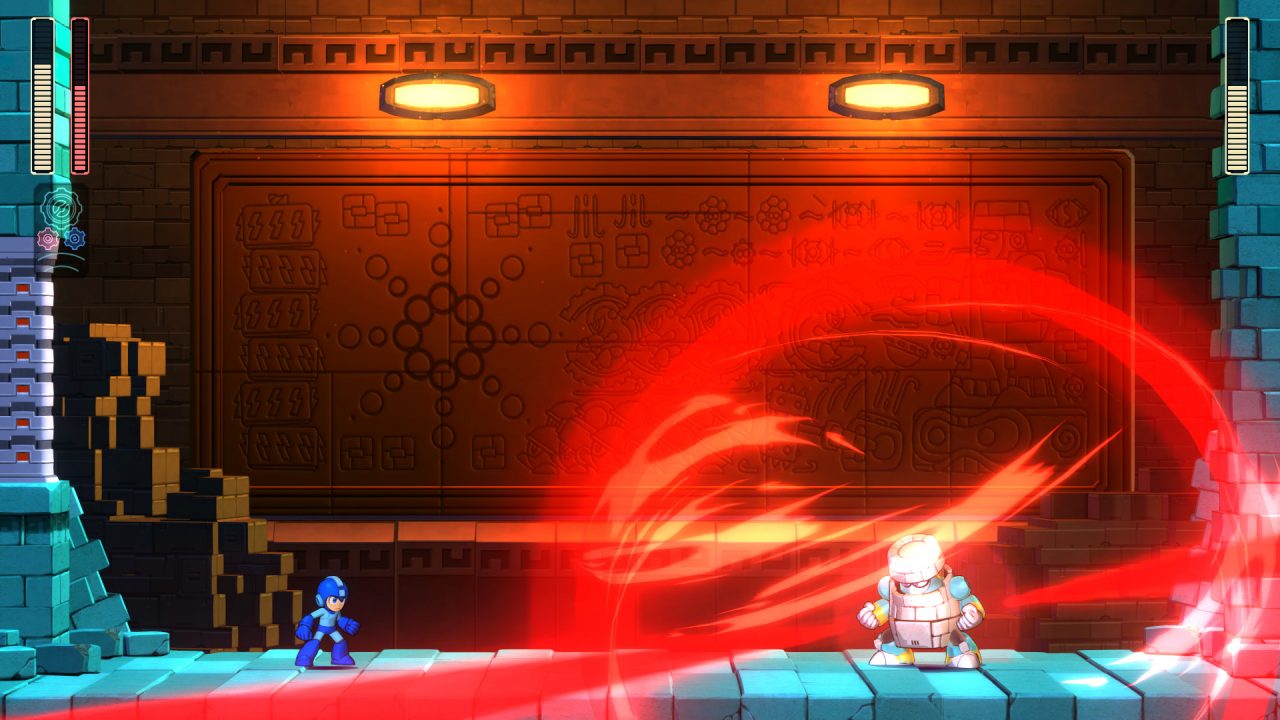 Luckily, their subweapons are quite good. While not as utility oriented like in Mega Man 9, they all function differently in battle. Fuse Man’s shock balls run through the ground, whereas Block Man’s blocks can handle airborne enemies with ease. Impact Man’s pile driver in particular can be used not just for combat, but as a cool dash move to clear gaps too. In fact the only power-up I found lacking is the usually reliable shield, courtesy of Acid Man. Its first shot will always form a shield, and only then is it possible to fire acid shots. If the shield depletes and you want to shoot again, a new shield needs to be formed. This makes the power-up rather ineffective in a fast-paced combat situation.

Another shortcoming of Mega Man 11 is the redundancy of its post-game content. There are challenge modes, but a lot of them revolve around going through the same stages again, beating a specific time in order to win medals. While traditional time attack is fine, the most unique mode is Balloon Rush, in which players must pop all blue balloons while avoiding the red ones. It adds another layer of strategy to traditional speed-runs, as sometimes it’s ideal to use different subweapons in order to reach certain balloons. There is also Dr. Light’s Trial, involving 30 extremely tough levels for those who think the harder Superhero difficulty setting wasn’t challenging enough. 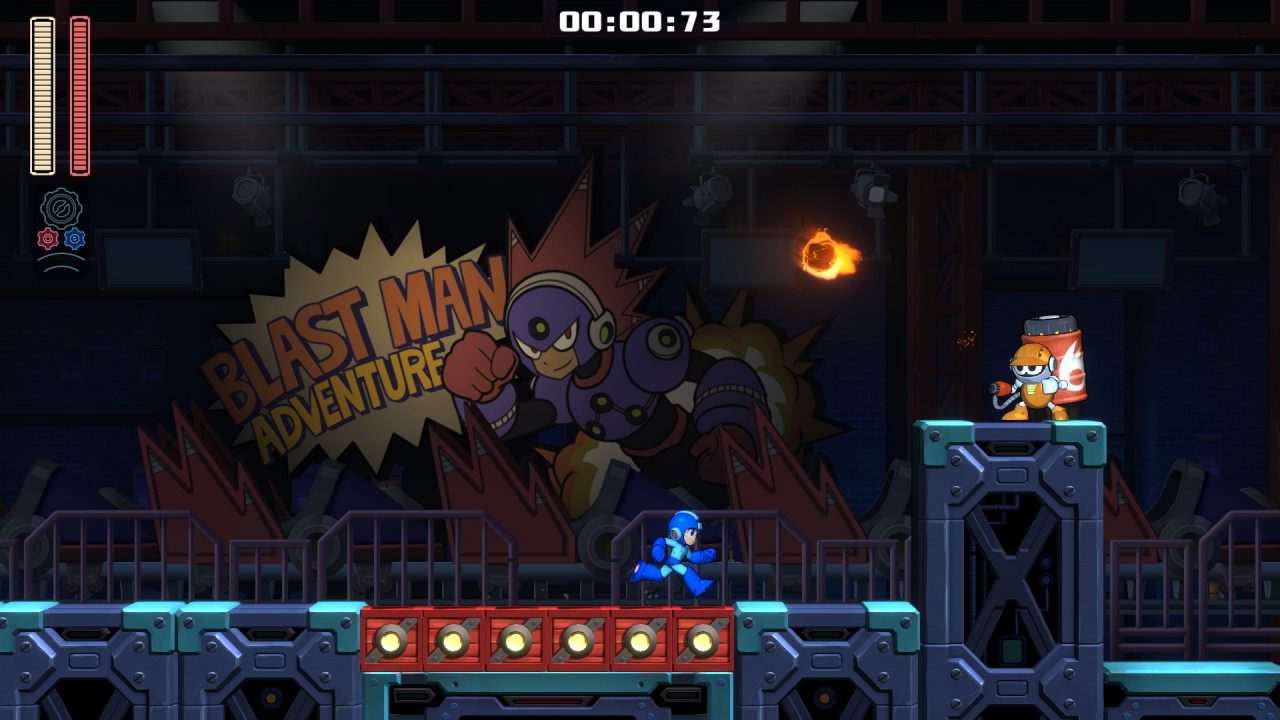 As mentioned earlier, the game’s graphical style is probably its biggest selling point. The cel-shading make the stages look vibrant and exuberant. The game retains its fidelity with the characters as well, not only looking great, but showing spot-on animation. The soundtrack, however, forfeits the memorable chiptune melodies of yore for a more techno-inspired music. While the music fits, none of the tracks really stand out, which is a shame for a series with some iconic themes.

For the first time in a while we also get voice acting, and while some characters like Dr. Wily are fantastically acted, his peer Dr. Light isn’t as convincing. Some might have issues getting accustomed to a more baritone sounding Mega Man, but it’s more of a directing issue than it is anything regarding the acting itself. Plus you can always change the language to Japanese if that’s that big of an issue. 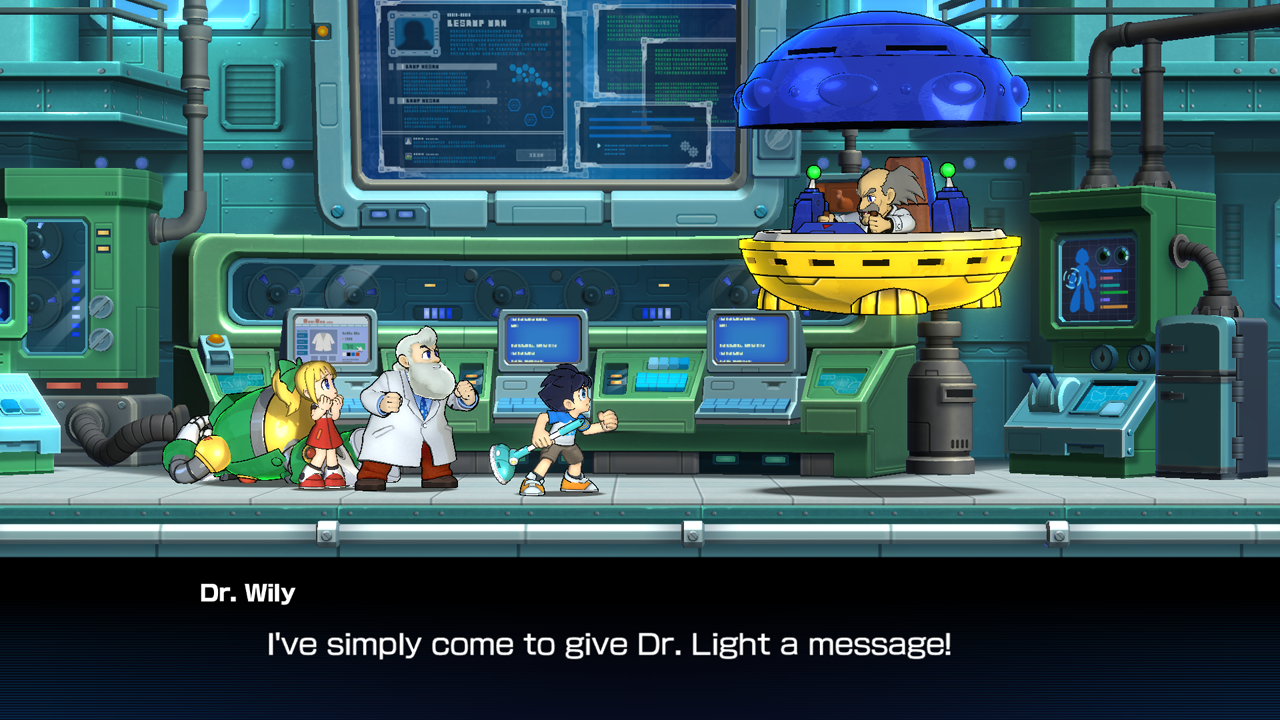 Mega Man 11 is definitely a step in the right direction for Capcom. The new graphical style, the interesting gear system, and some of the most unique bosses, stages and weapons make it a nice return to form. However, a forgettable soundtrack and sometimes downright brutal difficulty spikes can make it intolerable even to hardcore Mega Man fans. While it’s not the renaissance that Mega Man 9 accomplished ten years ago, it’s definitely a game that fans of the series will find something to enjoy.