In the world of gaming, there are several icons that easily stand out. Mario, Sonic, Crash Bandicoot, the list goes on and on. One of those icons that many hold near and dear is Mega Man, the Blue Bomber. Debuting back in 1987, Mega Man has been a gaming icon for over 30 years. Despite this, he hasn’t really had a new game release since 2011 (2012 if you count Street Fighter X Mega Man). Now, in 2018, fans can rejoice again, as Mega Man is returning with Mega Man 11. Capcom had Mega Man 11 playable at various events like E3 and San Diego Comic-Con, so we took the chance to give it a whirl. Playing Mega Man 11 at E3, there were two Robot Masters to choose from: Block Man and Fuse Man. Even though the casual difficulty was suggested, I disregarded it and played on normal. That was a mistake, but I’ll get to that later. Starting with Block Man’s stage, it was a cool stone oasis with pyramids and ruins. Just looking at the combination of 3D and hand-drawn graphics for the game, it fits very well for current platforms. It was clear that Capcom wanted to get a good art design that felt both modern and nostalgic.

The game would feel familiar to fans of the series almost instantly as Mega Man can run, jump, and slide across stages. New to the series is the Double Gear system, which allow players to perform various actions. The Speed Gear allows Mega Man to slow down time, allowing him to make more precise shots on enemies or even to use fast moving platforms to get to new areas. The Power Gear boosts Mega Man’s attack power, giving him added strength to fight his foes. If used for too long, the gears will overheat and leave Mega Man vulnerable for a moment. These new abilities, while welcome, might take a little getting used to for series veterans, but upon getting the hang of it, it can become second nature. 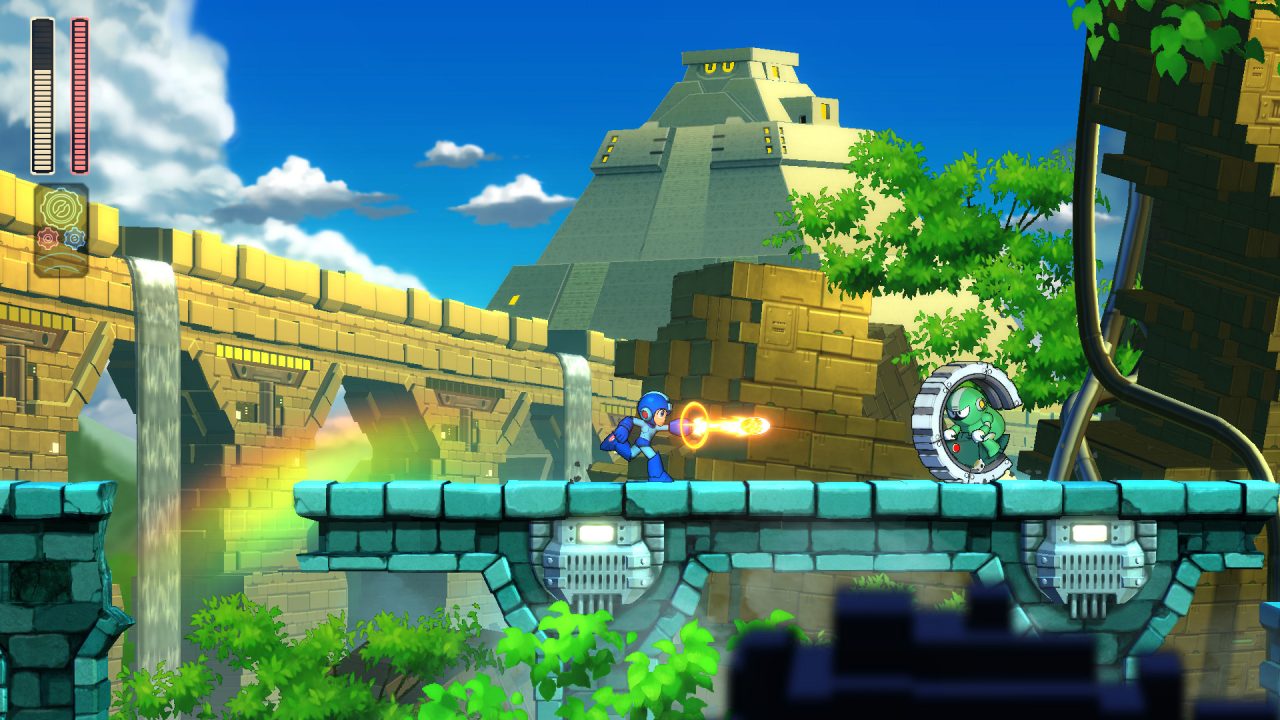 While fans will run into familiar enemies like Mettaurs, most of the enemy robots will be brand new. One of them rides around in a giant wheel with a small opening to shoot through, perfect for the Speed Gear. Another will be a stationary enemy that floats in mid-air as he shoots projectiles in eight directions. What makes this foe so deadly is his placement, as he’ll often be near bottomless pits. This is the case for many of the enemies, as their placement is what makes them dangerous. Some enemies might be easy to take down, but many others will take strategy.

The level design seems to be a fantastic call back to the previous games in the series. Many of the jumps will still need near pixel-perfect precision and timing. Some will even need attention to your surroundings so you don’t accidentally hit something mid-jump. This pixel-perfect nature can make it’s way into combat as well. The mini-boss of Block Man’s stage, a robot split into four sections, will test your abilities early on. As the robot splits apart, he’ll drop all four segments across the field, meaning you’ll have to stand between them to avoid damage. Only one section of his is vulnerable to attack, and only when it’s not spinning, so you have to wait for him to stack all his segments to attack. Using the Speed Gear, this can be a bit easier to manage. 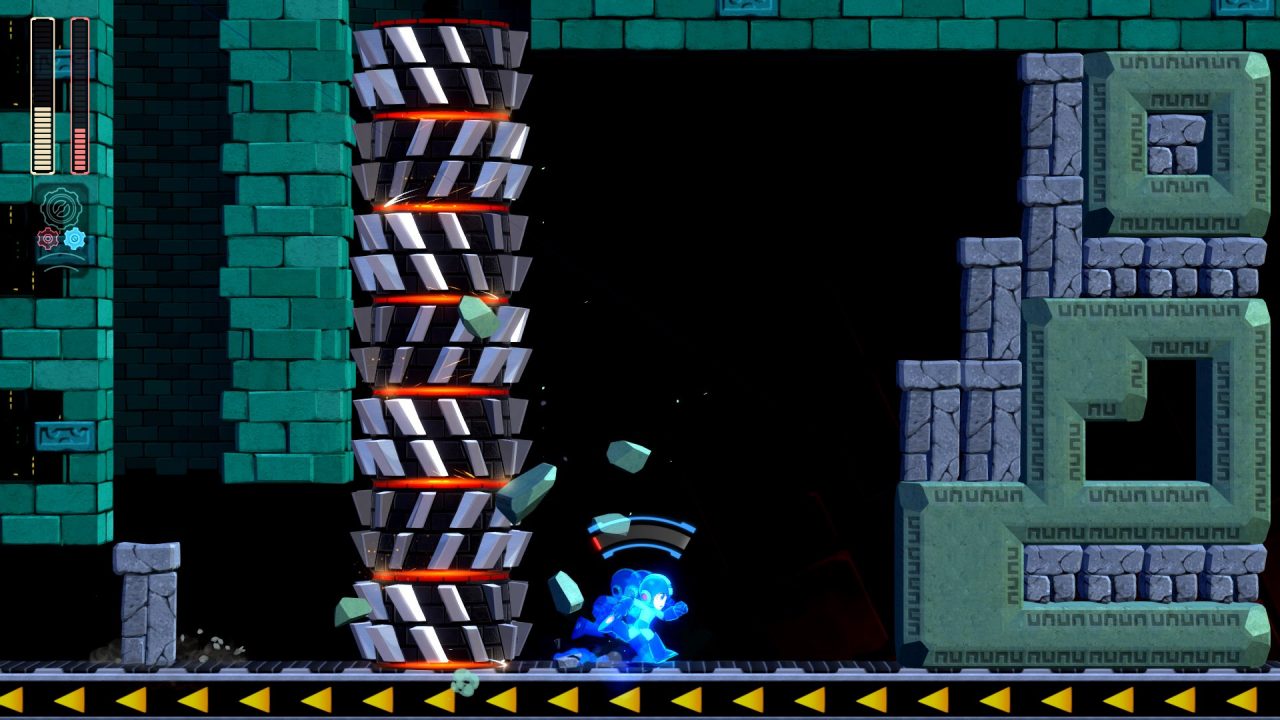 Continuing along, the stage will show even more uses for the Speed Gear. Fast falling platforms that can be used to reach higher areas, treadmills with obstacles to slow down progress. Several elements of this stage will test the Speed Gear and it makes for a perfect demo. Unfortunately, playing on normal difficulty at E3 meant I didn’t make it to Block Man, as the stage ended up defeating me. I did however go against him at San Diego Comic-Con thanks to moving down to casual difficulty.

Block Man is just one of the multiple Robot Masters in the game, but don’t count him out. Taking cues from the Mega Man X series, he actually has multiple phases during the boss fight. In the beginning, he’ll drop blocks over you (including himself). After dealing a bit of damage, he’ll transform into a giant golem, tossing more blocks at you as well as delivering devastating punches. The core in his torso is his weak spot, so deal enough damage to that and he’ll go to his final phase, where he will get faster and launch a steady stream of blocks horizontally toward you. It’ll test a lot of skills, but beating Block Man gave a great sense of accomplishment, even on casual. I only managed to beat him with a single pixel of health left. 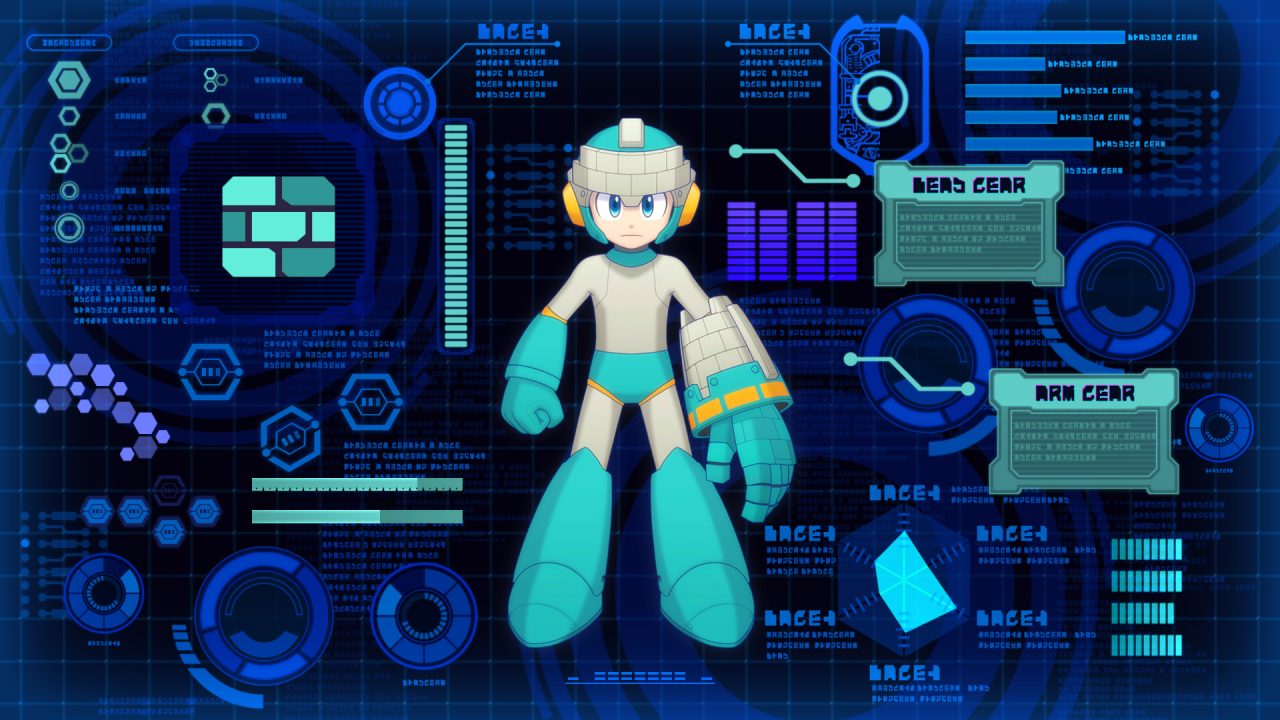 Like any Robot Master, defeating Block Man gave me his signature weapon, the Block Dropper. One thing that is cool to Mega Man 11 is that defeating a boss puts you in a practice room, allowing you to test out your new weapon with no risks. Unfortunately, the demo didn’t allow for these weapons to be used in any stages, so this was my only experience with a weapon. As many have probably noticed, the other new thing about weapons in Mega Man 11 is how it changes Mega Man himself. In previous games, the Blue Bomber would just change colors, but now he takes on traits of the defeated Robot Master. It’s a nice change and it helps to modernize the games a bit more.

Getting to the Fuse Man stage, his stage was more like a power plant. A lot of electrical elements create this stage as it’s more about the stage hazards than the enemies. Full of moving lasers powered by electrical power panels (that hurt you), this stage tests your patience. Several areas will have Mega Man move between lasers, finding cover occasionally to avoid damage. While there are new enemies here, not to mention the classic enemy Batton, the lasers are the true enemy. Even the mini-boss uses the lasers to force Mega Man into various parts of the room. At least the stage doesn’t have any disappearing blocks to cause frustration. 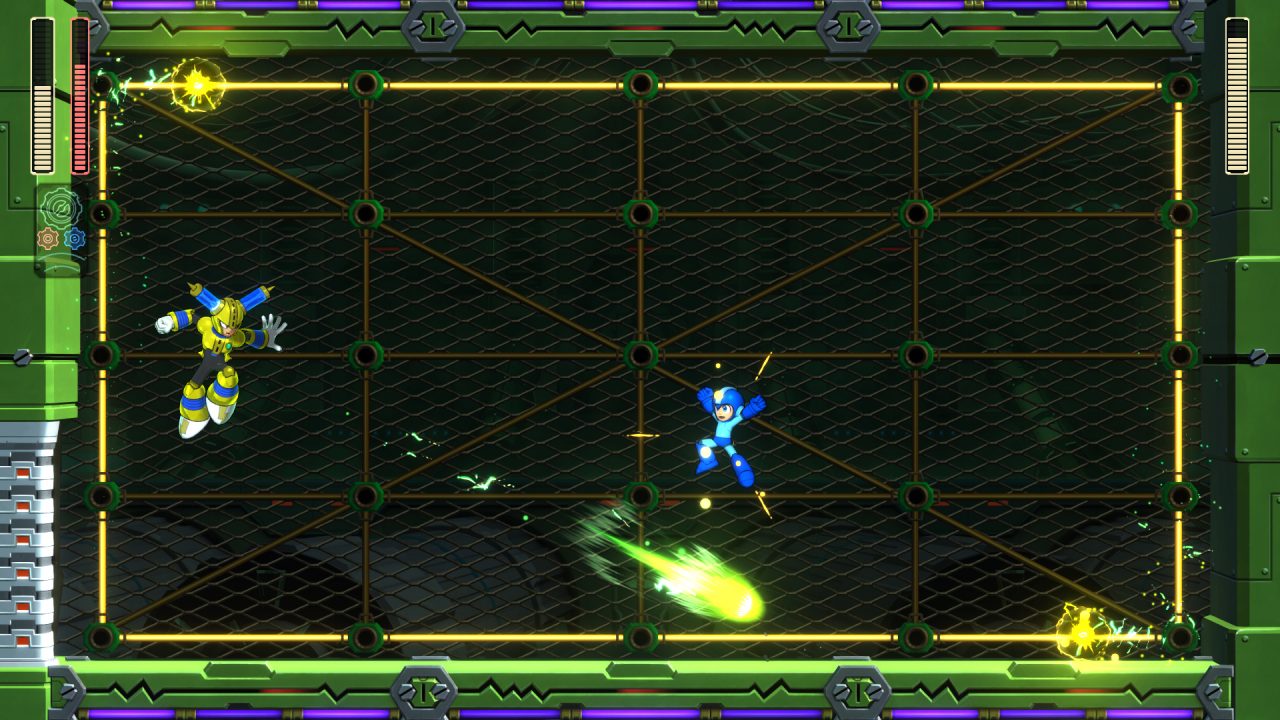 Using nothing but the Mega Buster, I did manage to get to Fuse Man on normal difficulty. Like Block Man, Fuse Man has multiple phases, though instead of a transformation, he simply changes up his pattern. He’ll run electricity along the borders of the stage while also jumping and launching projectiles at you in phase one. Eventually, he’ll jump into the wires in the background and come back out to attack with an electrifying tackle. He’ll move fast, so Speed Gear is incredibly handy here. After this phase, he mainly changes the wire pattern in the background, making the electricity move along a different path. Unfortunately, this was where I perished, and I never got another chance to beat Fuse Man.

Overall, Mega Man 11 feels great to play. The music sounds right for the series and will likely give birth to some fan favorites. The voice acting is a new element that some fans may not like, but it helps to up the presentation. Hopefully Capcom can give fans options to adjust voices for the characters. Controls are tight and feel just like the classic 2D titles despite being a 3D game. I really look forward to seeing what Capcom can do with a Wily Castle in this new presentation. Seems like they’re doing everything they can to make this entry accessible but also a challenge for series veterans. 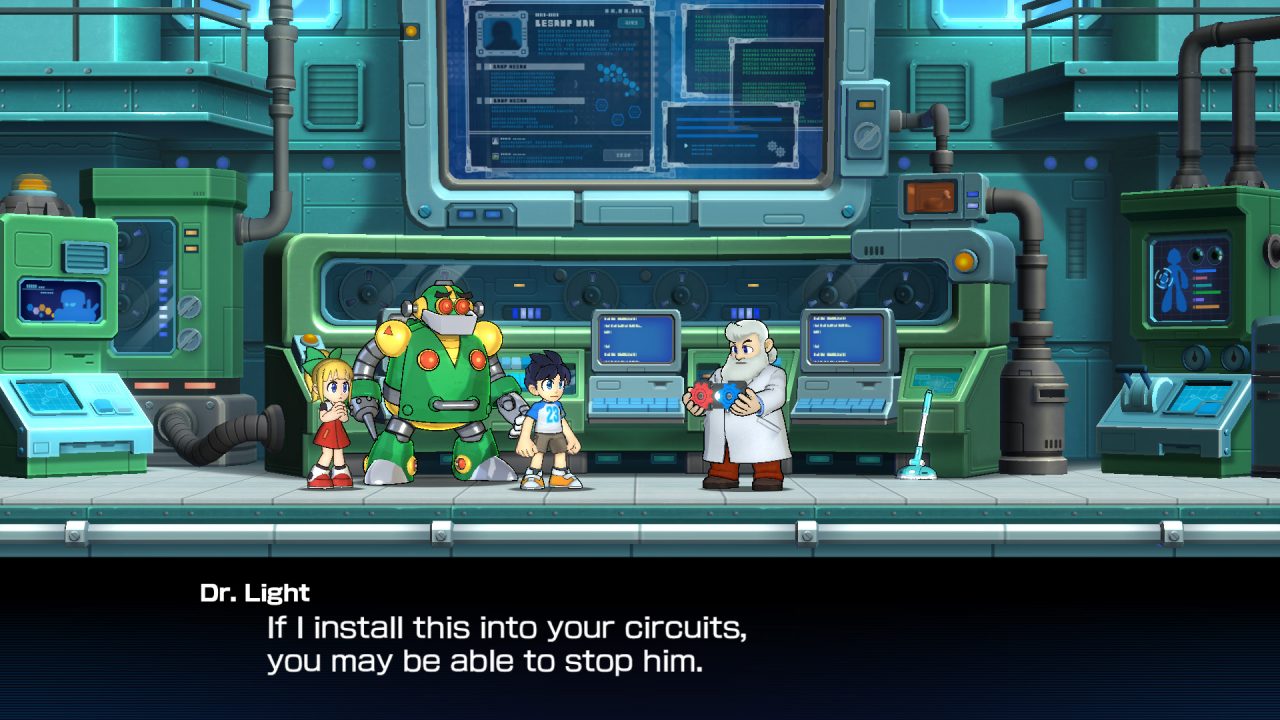 It’s safe to say that Mega Man 11 will be a big revival for the series. Fans have been waiting for quite some time and their patience will soon be rewarded. Mega Man 11 will be out on October 2nd for Nintendo Switch, Xbox One, PlayStation 4 and PC. Fans looking to get in on the action a bit early are in luck as well. Capcom just released a demo today for Nintendo Switch, and Xbox and PlayStation fans can play it tomorrow! Players of the demo can even contribute to a special Block Man challenge. We’ll have more on Mega Man 11 next month when the game releases.