During E3 2018, 505 Games gave us an opportunity to check out some of their published games at the show. After watching a gameplay demo of Remedy Entertainment’s Control, we sat down with director Mikael Kasurinen to talk about the game.

David Poole (DP): So (Control) was originally named P7, or at least code-named that. Is there still a meaning with P7 in the game? Or has that been completely removed?

Mikael Kasurinen (MK): Right, it’s um… I don’t want to go too much into it, but when you play the game, you might find elements that are related to that code-name. 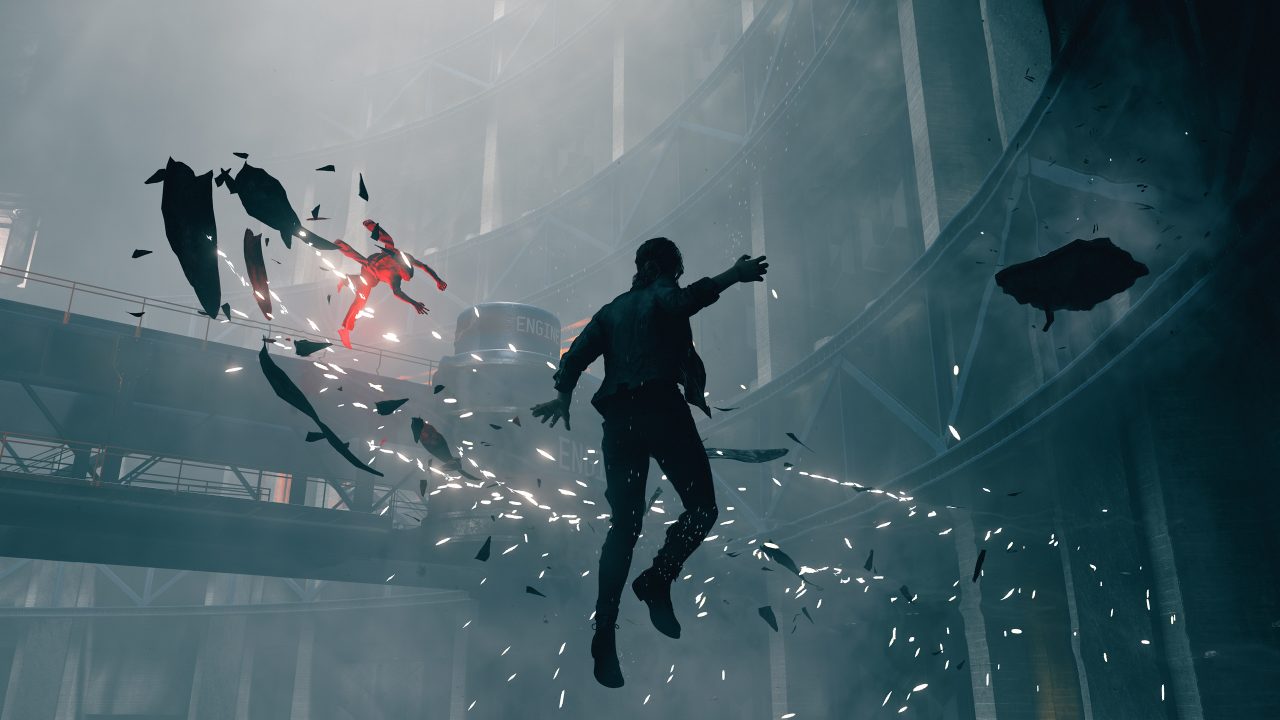 DP: Okay, and then tell me more about your protagonist Jesse Faden, where did her supernatural abilities come from?

MK: So Jesse is an outsider to this world, like when she comes into the bureau, she’s experiencing all of that stuff for the first time, but there are elements in her childhood where she had run into weird phenomenon, weird events and so on. And we wander the, let’s say the mystical atmosphere around this stuff, not being too clinical and clear about it, but she has history. And when she comes into this place, things are starting to unlock, if you will, and things are starting to roll at a fast pace.

Part of the allure of the game is there are these objects of power, basically these everyday objects that you find in your everyday life like a TV or telephone or so on, but something has happened around them, and this energy, this force, this supernatural force has been embedded into that. And as Jesse finds and interacts with these objects, it will cause some of these abilities to unlock.

DP: I know they (Remedy Entertainment staff) were describing it as sort of a action-adventure/Metroidvania feel where you’re going to be getting new abilities, and going back toward older locations with those abilities. So how much of that is at the core of the game?

MK: It’s definitely very much at the core of the game. I think it’s going to be the biggest thing that’s going to set us apart from our previous games, that we have this open-ended environment in this Metroidvania styled structure for the game, and when we started to create the concept of this game, we actually chose a different path forward with previous games.  We always started the story with “what’s the character? What is their story?” and so on, and this time instead, we wanted to handle it the other way around and start with the world.

So we have started to discuss “what is this place? What’s the nature of it?” and what other kind of interesting phenomenon belongs there, and also the bureau itself. And once we get the qualities of the world together, then we all actually start to talk about the story and the characters on how they would experience all of this. 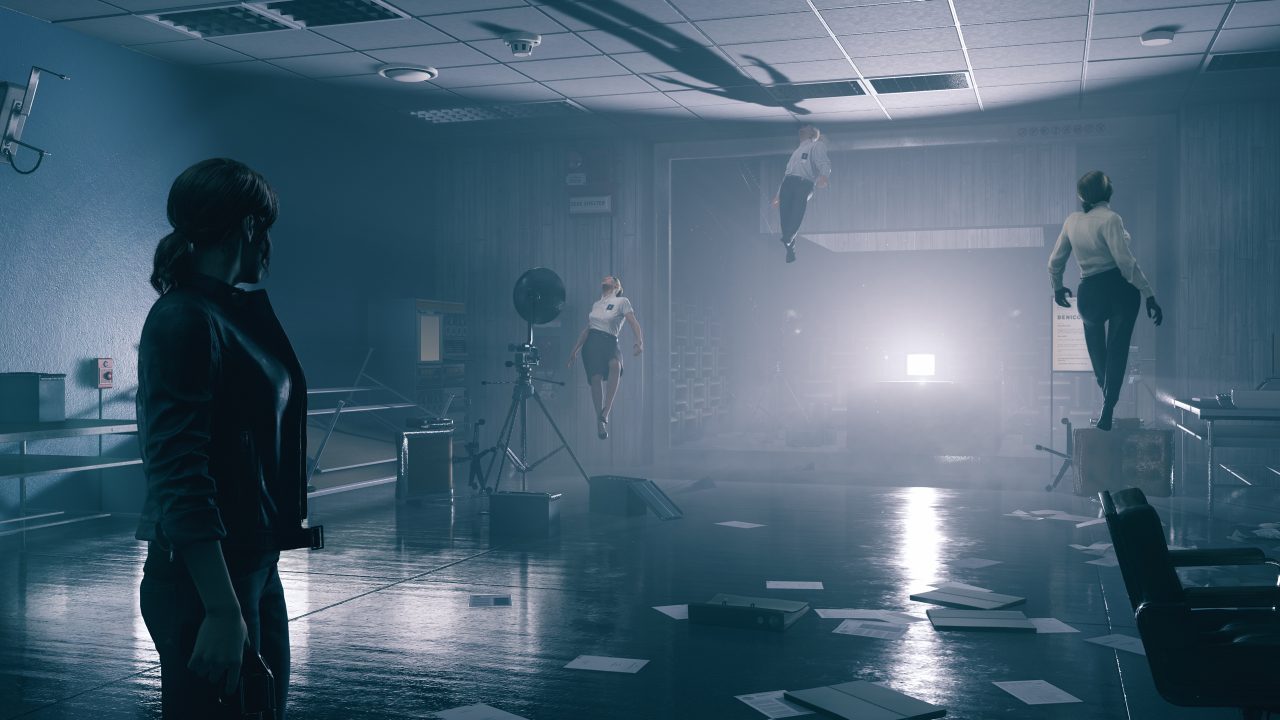 DP: Okay, sounds interesting! So I watched that demo…what’s with all the floating bodies [laughs]?

MK: [Laughs] The bodies, yea! Well, Jesse basically is chosen to be the director for this organization called Federal Bureau of Control, and basically, she’s coming into the situation, looking for answers, coming to this place for other reasons. But then this crisis happens, this weird force comes and takes over, and basically they’re in lockdown. Jesse’s locked in there with other people, and Hiss, the strange extraordinary force has come in and basically twisted, corrupted, transformed the building and all the humans—almost all the humans within it, and it does creepy, weird things to everything that it touches. Something that is hard for anybody to really understand.

Sometimes it’s expressed as humans floating in the air, and you know, there’s this feeling that something is happening, and I don’t really want to reveal more than that, but it’s part of the forces at play that is going on that Jesse’s very much fighting against, and when you look at the name of the game, Control, it’s at the heart of the experience, like you’re used to being in control but now it’s lost control, this force has taken over everything that is done and Jesse’s coming in and trying to get it back.

Everything you see, everything that is happening in the building, the weird twitchy chairs and so on is all part of the Hiss effect in this environment, but as you saw in the demo, there are other elements at play as well, like the weird TV, and there will be some power outages in this complicated and mysterious world, and as I said before, when we started to create this onset, we started with the world, but from the get-go we wanted to create many different stories within it.

Sure, there’s a main campaign, which is all about Jesse’s story, becoming the director, and then there are a lot of other things as well: side quests and exploration, like with the guy with the fridge, who needs to keep looking at the fridge, and if he doesn’t, something terrible will happen. 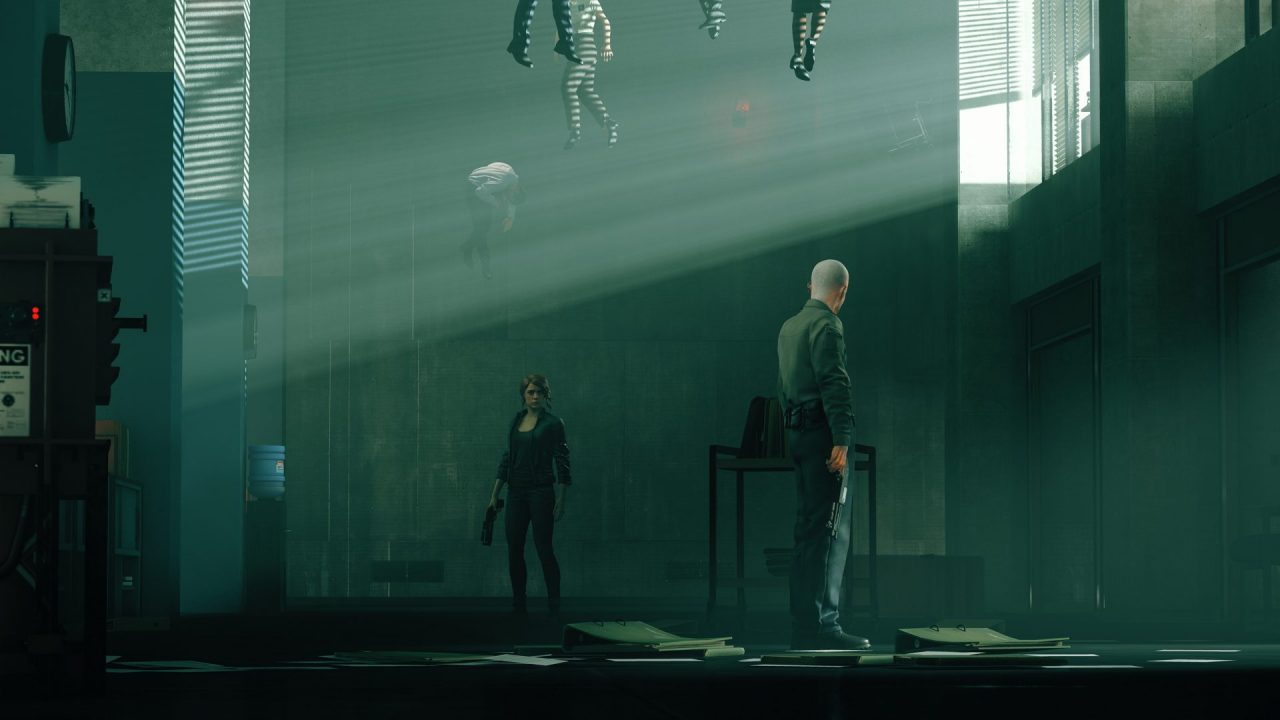 DP: Alright, getting to the weaponry and the combat, I was paying attention to the way Jesse’s gun kinda transforms, is it her powers that effect that? Or is that the gun itself?

MK: Uhm, yea, it’s mysterious right? [Laughs] So the shape-shifting aesthetic is kind of a pillar in the game. When you look at the building shifting, and you see the gun shifting, it’s part of the supernatural language that we have. And Jesse has a way to interact with that, a way to effect that. We see that in the demo, we see how the gun works with her and so on. We really wanted the gun to feel like that it’s alive or like it’s beating, it’s pulsing with Jesse, and it does what Jesse needs it to do.

The service weapon, which we call it, it’s an object of power that Jesse finds early on in the game, and basically, it’s an object of power that’s been passed down from director to director in the bureau. So basically, you being able to wield it means that you are the director. It goes all the way back into this legend about the sword in the stone, and whoever is able to pull it out, becomes the king. So it has that same element to it. Maybe it’s been a sword back in history, and so this is the atmosphere of what it created around it. You can unlock more different forms for the weapon itself as you progress through the game.

DP: Nice! So going to how the building and everything shape-shifts and transforms, it seems like the game overall plays with your mind a little bit. How heavily does it play with your head?

MK: [Laughs] As much as it possibly can. We wanted to be this—so there’s layers here, right? So we wanted there to be this—when you look at the environment, there’s this Brutalistic architectural style. This is all about simplicity of form and honesty in the materials. What you see is what you get, there’s concrete, there’s steel, there’s glass, there’s some wood. You understand what these things are. Then there are layers as well. 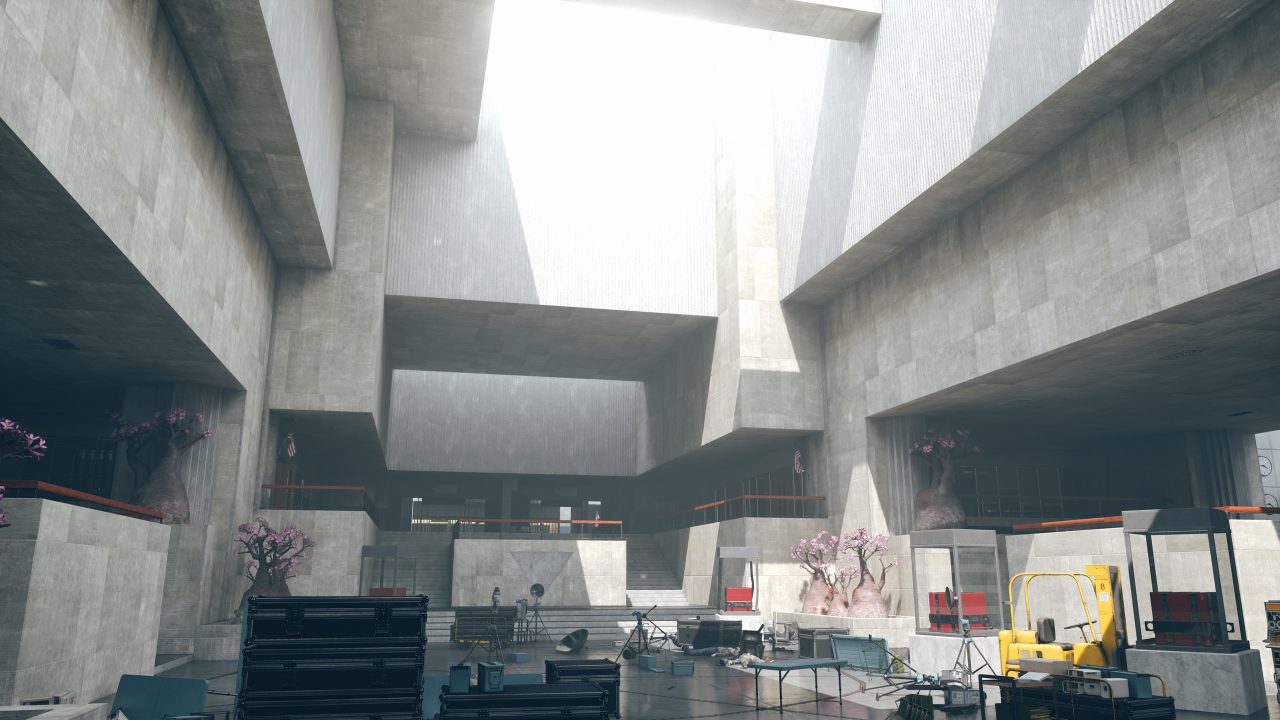 There are certain elements that change or shift depending on whether you know the right rules, the right rituals, the right things to do, or when it’s the right time to do these things. So then, secrets are revealed, and then hidden things become visible, and so on. And we definitely wanted to create a feeling of uncertainty to this place. There is this literary genre that both me and Sam (Lake) love, called the New Weird, and one of the books that we read, when we were building this concept was Annihilation, there’s a movie that actually came out on Netflix with Natalie Portman.

MK: Yea, it was excellent right? So, the New Weird, the idea is that you might encounter things that are beyond human understanding. Like it’s unexplainable, and we really mean it like unexplainable, like what you see is something that might be possible for you to never comprehend, and you see different sides of it, you see different aspects of this, and sometimes they might even contradict each other, and so on. That’s the feeling we want to have in this game, to kind of face these strange, weird phenomenon, and you’re there with the bureau.

You’re trying to understand what’s going on, what’s happening and why, and you get hints, you get different kind of clues, and all of them kind of challenge you to think about it, and then ask these questions and so on, and ideally people get engaged by that, they want to find out more, they think about it after they play the game at work the next day, and like “oh, well should I wanna go back and actually explore that other part of the building”, and find out more, so I wanted there to be this depth to that world. 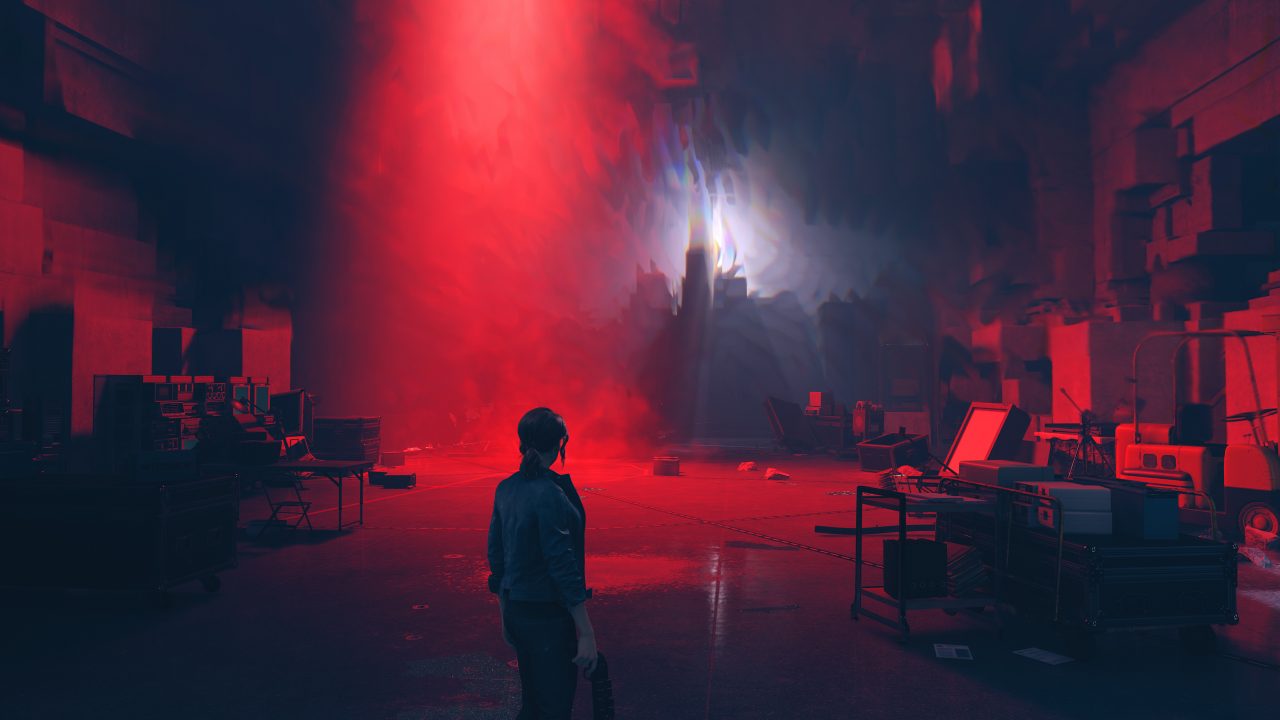 DP: Alright, again, looking at the gameplay, I noticed there was a lack of a heads-up display, is that for the demo? Or is that what you’re planning for the final game?

MK: Well, immersion has always been important for us, like we want it to feel like you are there in the world, and that applies to the heart as well. We want it to be this very minimalistic tone, but having said that, it is important to convey relevant information for the player so they feel like they understand what is happening. We try to do that as much as possible, true to the actual aesthetics of the game, like how the world reacts in the game, but sometimes there are limits that we need to accept, that there are hard elements, so our goal is definitely to minimize it, but this is still an early version of the game, so things might still change.

MK: Sorry, can’t comment on that anymore than this.

DP: I appreciate your time, thank you!

As said, Control is targeting a 2019 release date for the PlayStation 4, Xbox One and PC. We hope to have more information on the game in the coming months. Feel free to check out the recently released showcase of the game using the new Nvidia RTX graphics card.