It’s been over a year since Super Bomberman R launched on the Nintendo Switch. Since then, it’s had several updates to improve the game both in content, and in gameplay. Now the game is released for the PlayStation 4, Xbox One and PC, and even has an all new update. We played the PlayStation 4 version to see how it is after all the updates. 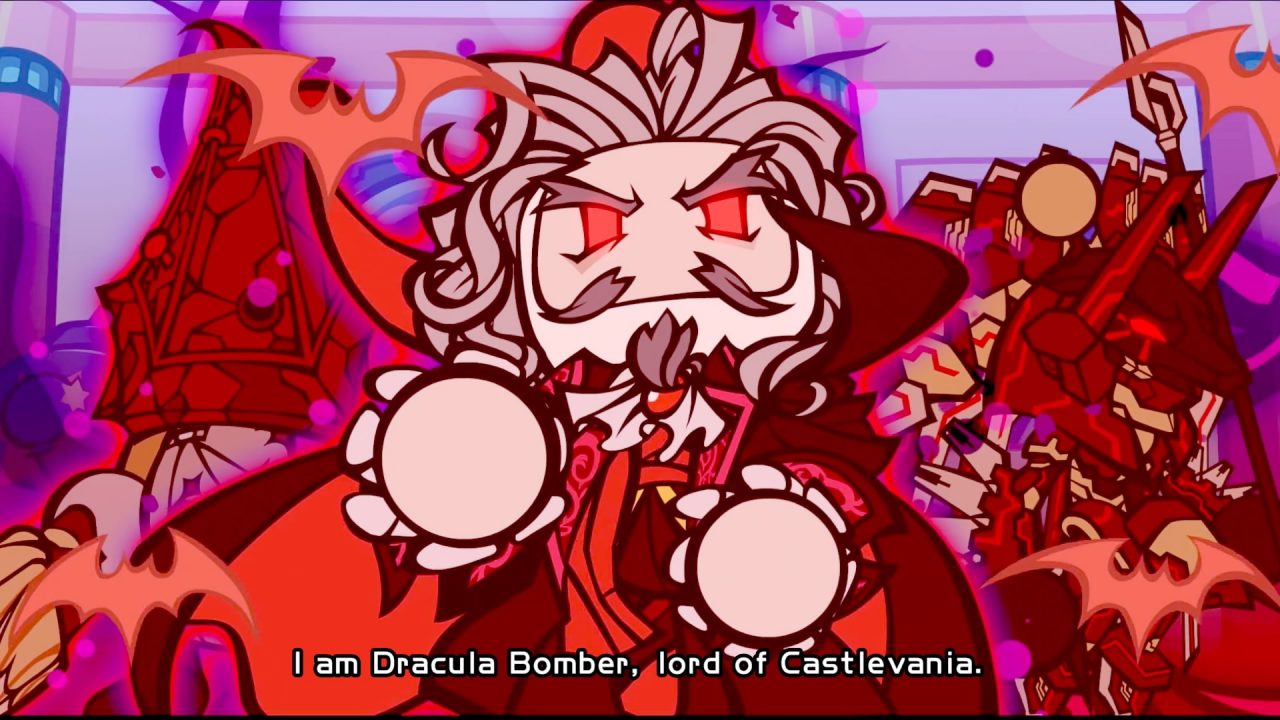 Super Bomberman R is the first Bomberman game to come from Konami after their acquired Hudson’s IPs. On the Switch, the game launched with just Bomberman content. Since then, there have been several updates adding characters from other big name Konami franchises. This included Castlevania, Silent Hill, Rumble Roses, and even more recently, Metal Gear Solid. Even with the new platform launches, platform exclusive characters have been added. Xbox One gets Master Chief from Halo, PlayStation 4 gets Ratchet & Clank, and Steam gets P-Body from Portal 2. Incorporating the Konami franchises is a great fit for the series, making Bomberman feel like the biggest party it’s ever been.

For local play, Super Bomberman R is a blast. Up to four players can go head-to-head in several stages (with plenty to unlock). Unfortunately, when online gets involved, it’s a completely different story. With my time with the game, I’ve played maybe a dozen or so matches online, most of which were with the same person. Since then, I haven’t been able to find anyone to play online with. It’s truly unfortunate that the game is that dead online, especially so early in its release. Even if a match can be found, lag can be a big problem with this game. When precise movement could mean the difference between being safe and exploding, lag can destroy that precision. Konami might not be able to do something about the lack of players, but they definitely could’ve improved the online with these new platforms. 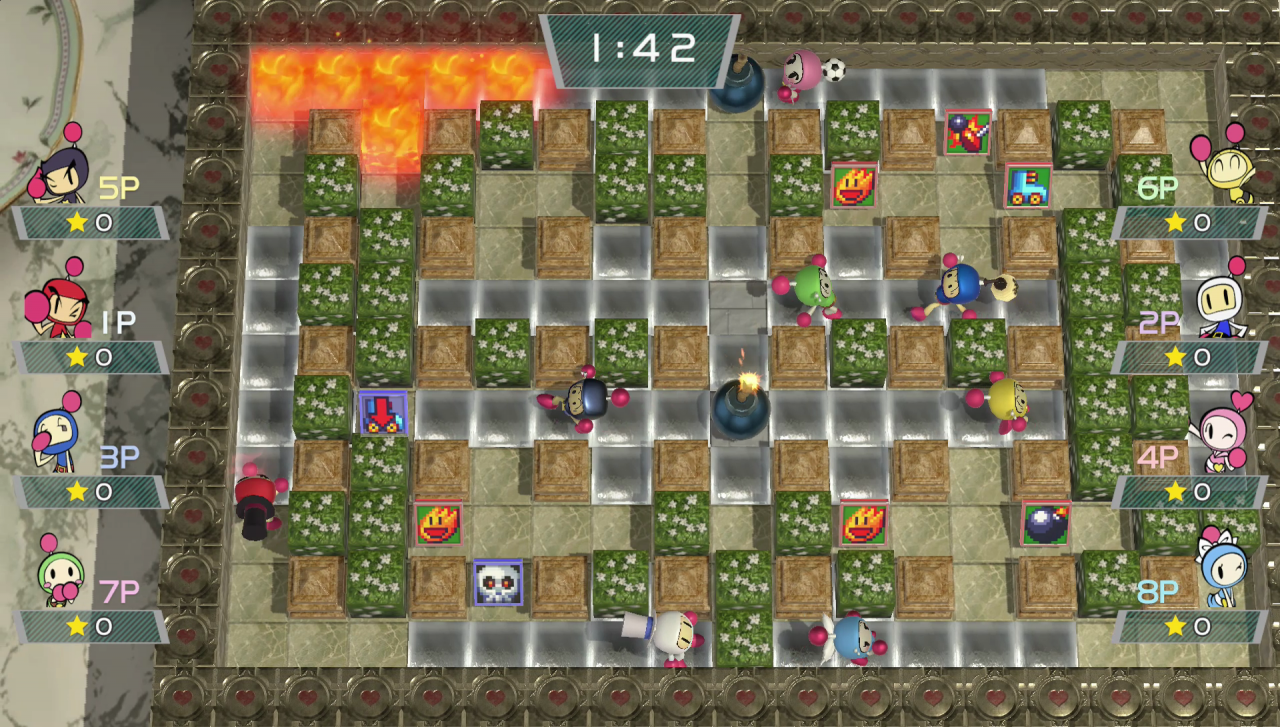 One of the updates since the Switch release was the Grand Prix mode. This three-on-three mode allows players to compete in various game modes. Crystals has players gather crystals on the map with a time limit. Getting blown up makes players drop half their crystals for others to pick up. The team with the most crystals at the end wins the match. Basic Bomber works similar to classic Bomberman, though players have a set amount of lives and gain points for eliminating enemies.

The most recent update adds Checkpoints, which is probably the most entertaining mode of them all. Players go to three checkpoints and try to take control of them to gain supremacy. If a team can hold all three for 15 seconds, they automatically win the match. Alternatively, the team with the most points collected from checkpoints when the time runs out also wins. It’s a shame the online doesn’t have a lot of players, as this would be a lot of fun online. It doesn’t help that the online modes are so isolated, as players might have a hard time finding anyone across any of the modes. 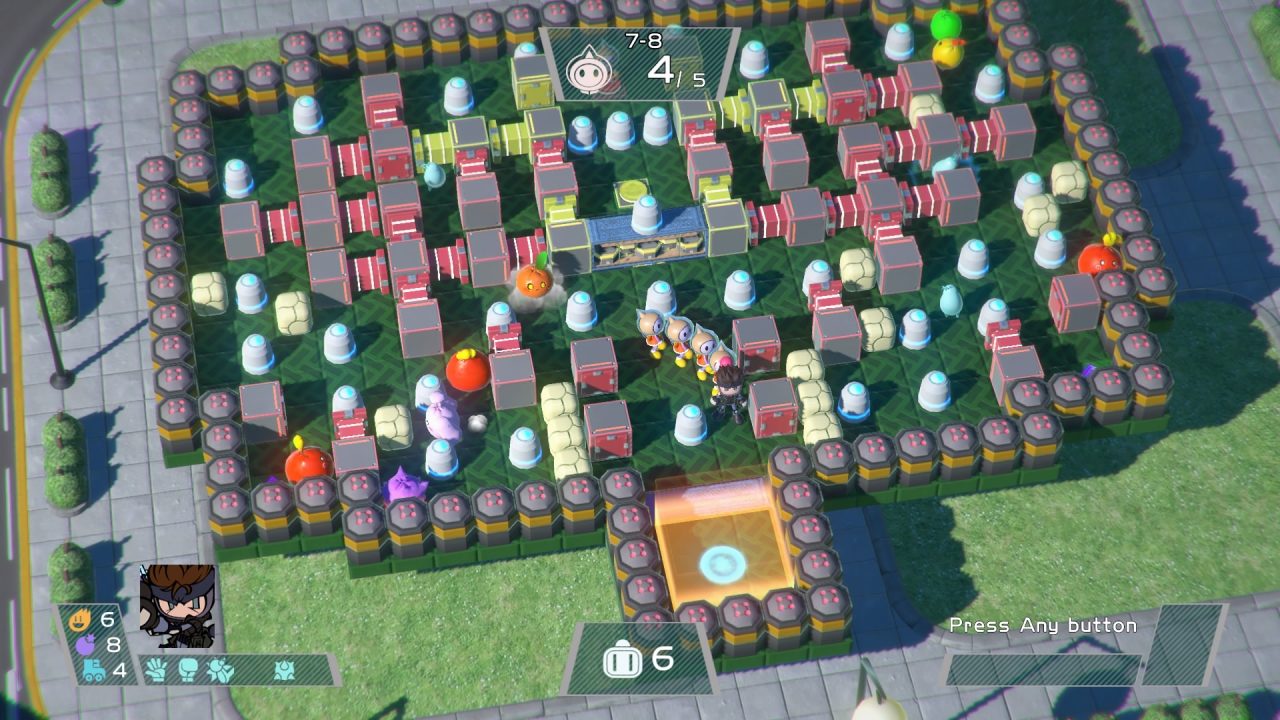 If players can’t get into an online match or don’t have any local players to play with, there is a campaign to play. Up to two players can play through over 60 levels, each with various objectives. The story involves the eight Bomberman Brothers (though two of them are girls), as they fight to save the universe. Along their travels, they’ll challenge the five Dastardly Bombers and even the evil mad scientist, Buggler. It needs to be said that this campaign isn’t exactly easy. While there are three difficulty settings, it mostly just changes the amount of lives players have and the strength of bosses. The true difficulty however is in some of the objectives, and even the standard Bomber boss fights.

Some of the objectives range from defeating all enemies or even just collecting keys. However, one of the most frustrating objectives would be the rescue objective. These stages task players will going around to rescue civilians in the map, having to collect all of them before bringing them back to the goal. If a civilian gets hit by an enemy (who respawn infinitely), they return to the place you found them. This can get incredibly frustrating when the field is full of enemies and you get close to the goal, only to lose a civilian and have to go risk everyone to get that civilian back. 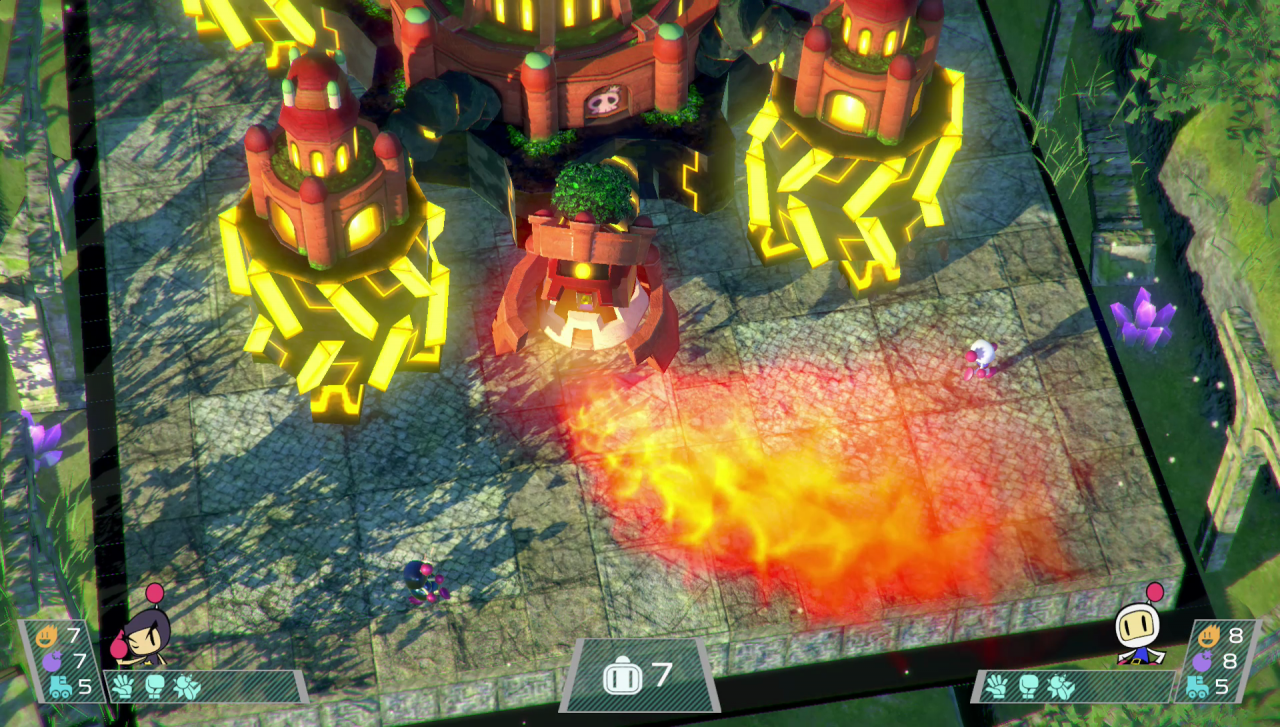 There are also obstacles that can end up practically breaking the game. Switches can sometimes activate platform movement, and in one instance, I was on top of a platform that got activated by a switch, and I was stuck. I had to blow myself up just to respawn at the start of the mission. Bosses can also be tricky, as the Dastardly Bombers have aggressive AI to fight against. They’ll evade the majority of the players bombs, and players will likely die multiple times before they finally beat them on accident. Their transformations to a larger boss are significantly easier, though they still have various flaws.

Performance in the game is heavily improved, as the frame rate is much more stable than it was at launch on the Nintendo Switch. Despite this, there are still some design issues that one might take issue with. One of the default settings can become one of the biggest nuisances.: the dynamic camera. This can be entertaining to watch, but with the placement of the timer, it can sometimes obscure a players view. Luckily, this setting can be changed, so it’s not as much of an issue. One of the boss fights also seems poorly designed, as the boss can attack you in places where players can’t escape. If players lose all their lives, they’ll have to spend in-game currency to get a continue. Luckily, the game maxes out at two times per world, making any future continues on that world free. 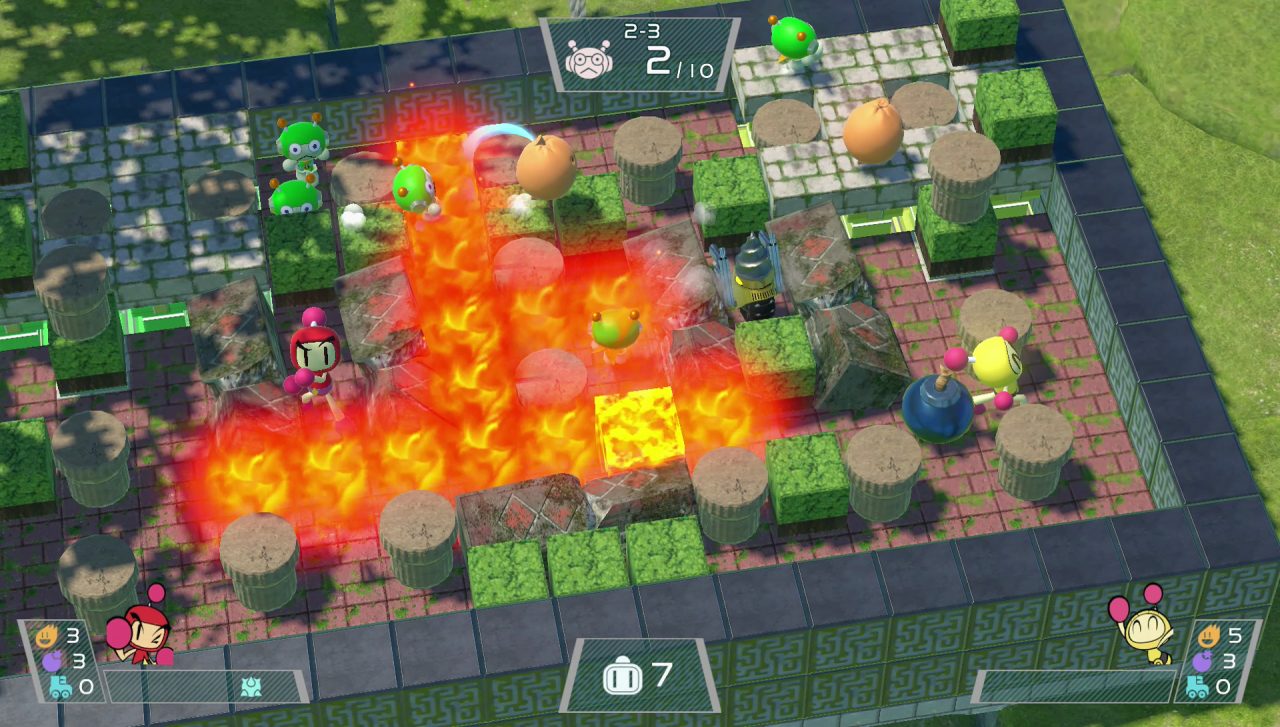 One thing that the game does well with is the level of charm in the characters. While a minor part of the gameplay, it’s nice to see the different playable characters show their personality. Red Bomber is brave and walks with a confident stride while Blue Bomber will sleepily stroll in a lazy posture. Not only does their personality show in their animation, but sometimes their special abilities too. Ratchet will use a water pistol against his opponents while Pyramid Head will slow down his movement to activate a touch of death. These abilities can be turned off, but sometimes it could be use to make the main game a bit more interesting.

Overall, Super Bomberman R on other consoles feels like a more complete package. It may not be a perfect game, but it’s still great for local multiplayer fun. If the online was more active, it would be a much better experience. Unfortunately, Konami doesn’t have a way to really control that, but perhaps their next Bomberman game might be more popular. It’ll be interesting to see where Konami decides to take this classic franchise. With Super Bomberman R, it may be going in the right direction.