It’s very rare when a classic game is re-released without sacrificing the quality of the original. Natsume released the original Wild Guns in the early 90s for the Super Nintendo. With surprisingly deep gameplay and incredible attention to detail, it lived on to become a cult classic. In 2016, the original team released Wild Guns: Reloaded for the PlayStation 4, adding two extra characters and new stages, as well as local four player co-op. Now Wild Guns: Reloaded makes its way to the Nintendo Switch with a few added features.

Wild Guns is set in a wild west world with a steampunk and sci-fi flair. Focused more on gameplay than story, the original starred Annie, and the space bounty hunter Clint as they set out to take down the Kid family. With Reloaded, Doris and Bullet join them on their mission of revenge. Doris is a powerful bomber with the unique ability to charge multiple grenades and throw them at enemies. Bullet is a sentient dog with a sentry drone that can auto-target enemies and obstacles. These added characters bring a lot more to the game, bringing a more unique flavor to the game, especially with multiplayer. 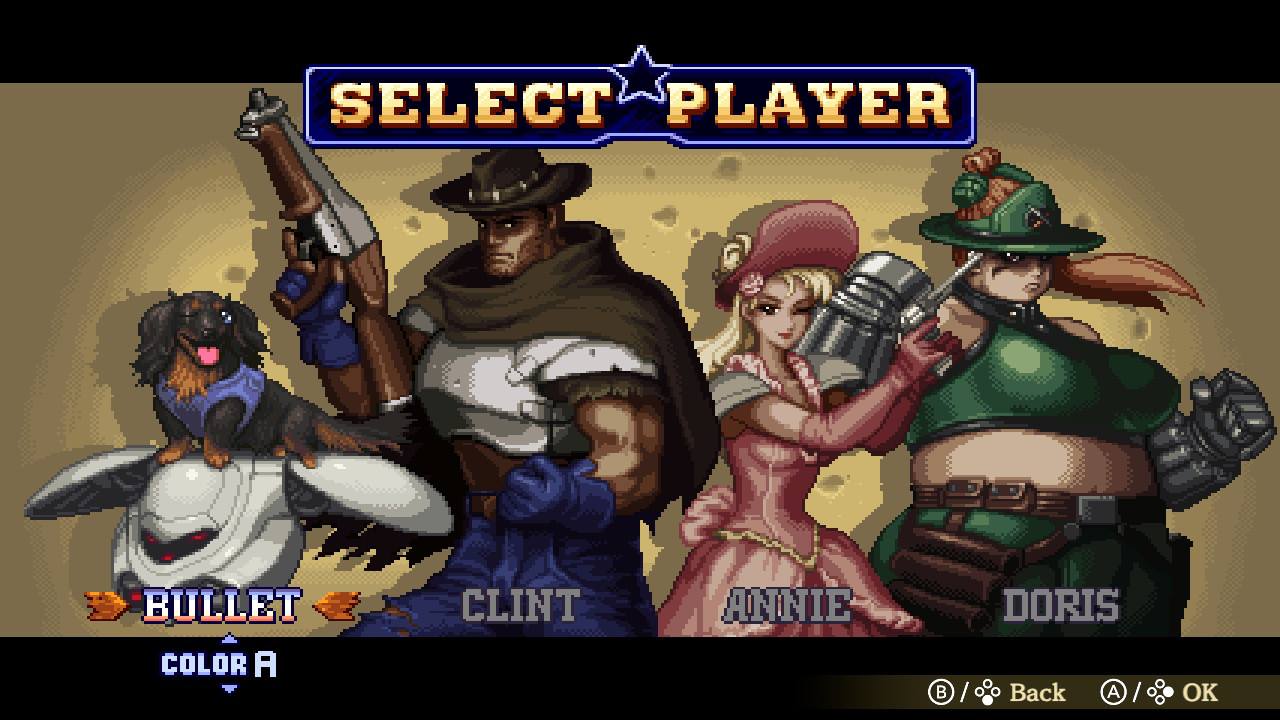 Gameplay works like a third-person shooter mixed with a shooting gallery. Characters can move around in the foreground and move their target reticle to shoot enemies in the background. Players cannot move their character while shooting at the same time. This adds a bit of challenge as players will have to figure out when to move their character or when to move their target reticle. Occasionally enemies will also show up in the foreground, requiring a quick hit of the shoot button to perform a melee attack.

Players can double jump, dodge, and roll to avoid enemy fire, but an extra bit of depth is added with Wild Guns. Players can also shoot the bullets of their enemies, which can effectively block incoming attacks. Even if they are in danger of being hit, a bubble that says “Look Out!” will appear above the character, giving them a moment to dodge quickly. Some enemies will even throw dynamite which can be picked up and thrown back. If players press the shoot button repeatedly, they can also throw a lasso to stun enemies. 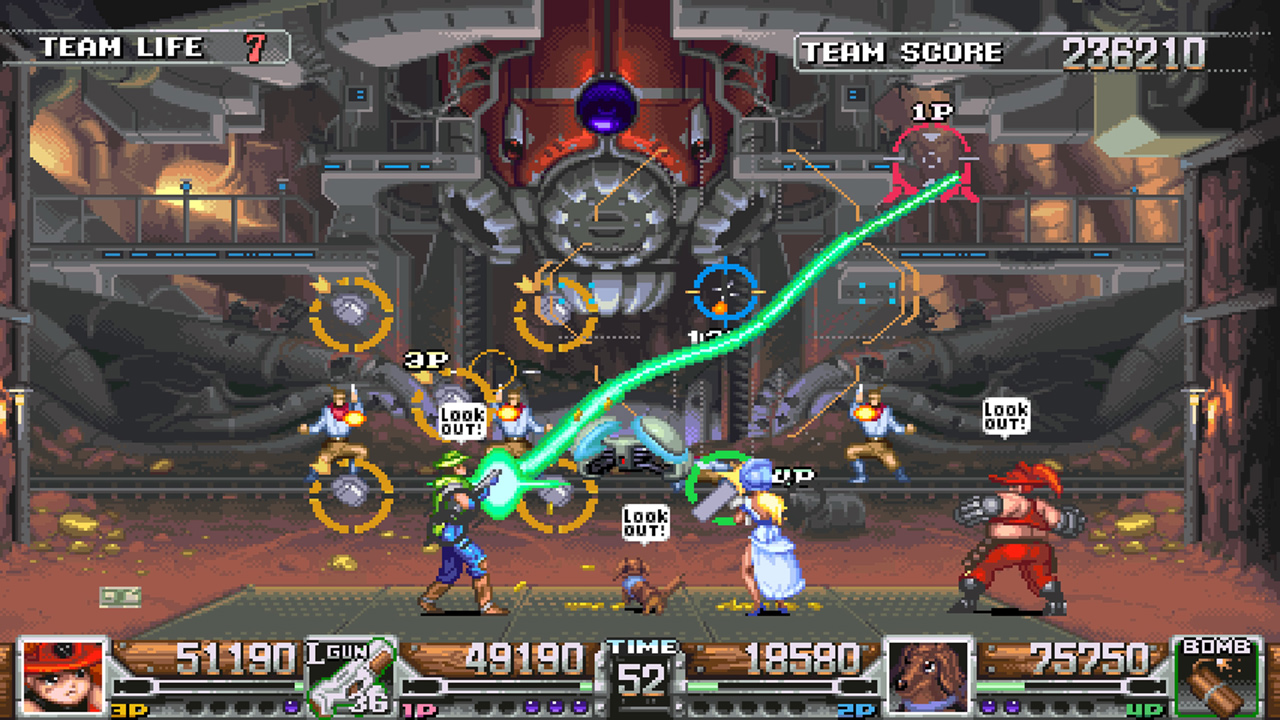 It’s a lot of depth in what looks like a simplistic game, but it goes further than that. Practically the whole environment is destructible. This allows players to uncover hidden treasures to add to their score, or even power-ups for their weapons.  There were six stages in the original, with two levels each and a third level to fight the boss. Wild Guns: Reloaded adds two new levels, both exclusive to harder difficulties or multiplayer. Each one also comes with an awesome new boss as well.

Weapons start out fairly simple, with the exception of Doris and her grenades. Holding down the shoot button will let out a consistent fire rate of bullets that deal a decent amount of damage. Players can find upgrades like the shotgun, machine gun, laser, or even the laughable peashooter. Each one has a specific amount of ammo and will disappear once depleted. 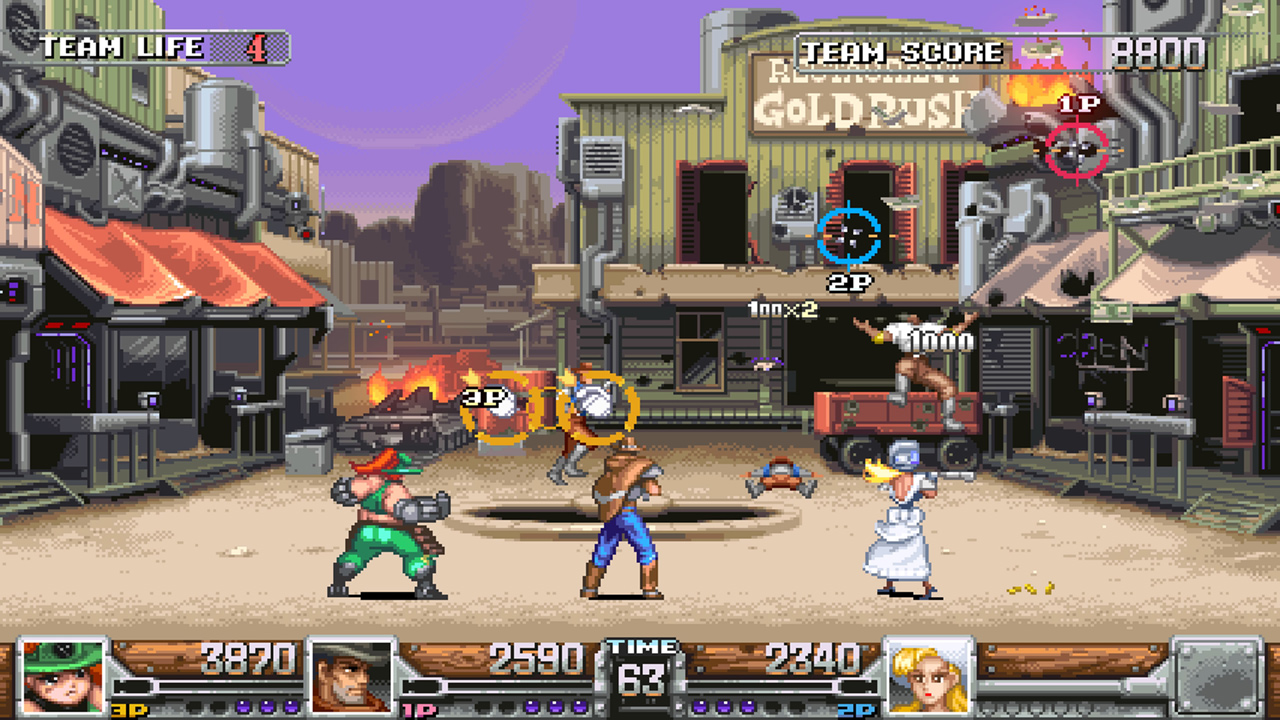 If players fill up their power meter, they can unleash the gatling gun, or Vulcan as it’s sometimes referred to. This weapon is not only incredibly powerful, but it also grants temporary invincibility. Last, but not least, players can hold up to five bombs, which can clear roughly half the screen. These powerful weapons are great when you’re getting overwhelmed by enemies, or even to deal extra damage to a boss. Overall, the various weapons offer a lot of extra strategy for more skilled players.

Speaking of skill, Wild Guns: Reloaded offers four difficulty settings. There’s the typical easy, normal, and hard modes, hard being unlocked upon completion of the game. Exclusively added to the Switch version is a new beginner mode, which gives unlimited lives and allows players to easily beat the game. What is unusual however is that there are no difficulty options for multiplayer. Multiplayer is fun, and in some ways, easier, but the lack of difficulty options makes it a bit frustrating too. 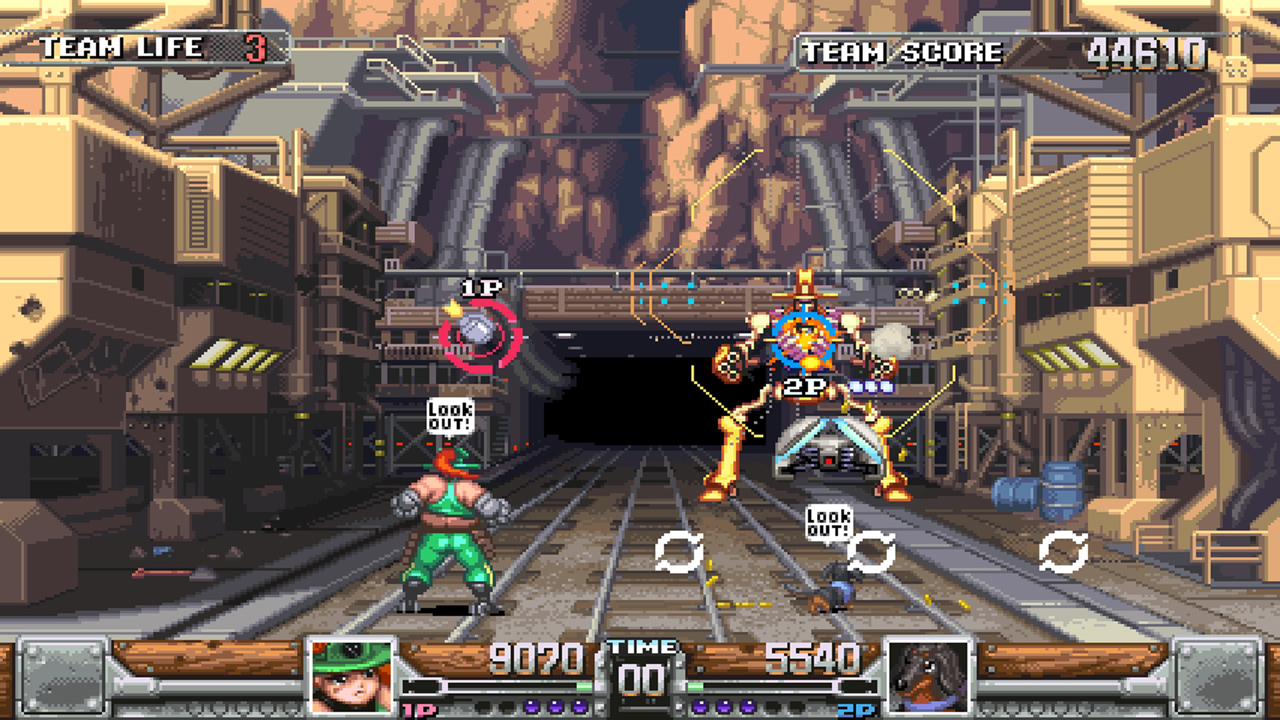 When playing multiplayer, every player shares from a pool of lives. That means that if one player dies too often, it punishes the rest of the players. This also makes the acquisition of lives a bit more frustrating as well. If a four player game boils down to one player with three waiting to be revived, they each must wait until that player earns an extra life for each one. What this typically means is that once all the lives are depleted, it’s an uphill battle to get players back into the game.

What is nice about the multiplayer is that the difficulty doesn’t scale up, so enemies take the same amount of damage. In some cases, this can mean a boss can go down from one combined attack from four players. That doesn’t mean that it’s always easier though. With more characters means more information to keep track of on screen. Characters can’t walk through another, meaning to move somewhere else, they must jump over them. Sometimes it’s easy to lose track of enemy fire when your allies are blowing stuff up, or their target reticle is in the way. Overall, when everyone is still alive, the multiplayer is a blast.  Despite this, beginner mode would be nice, so everyone can stick around for the whole game. 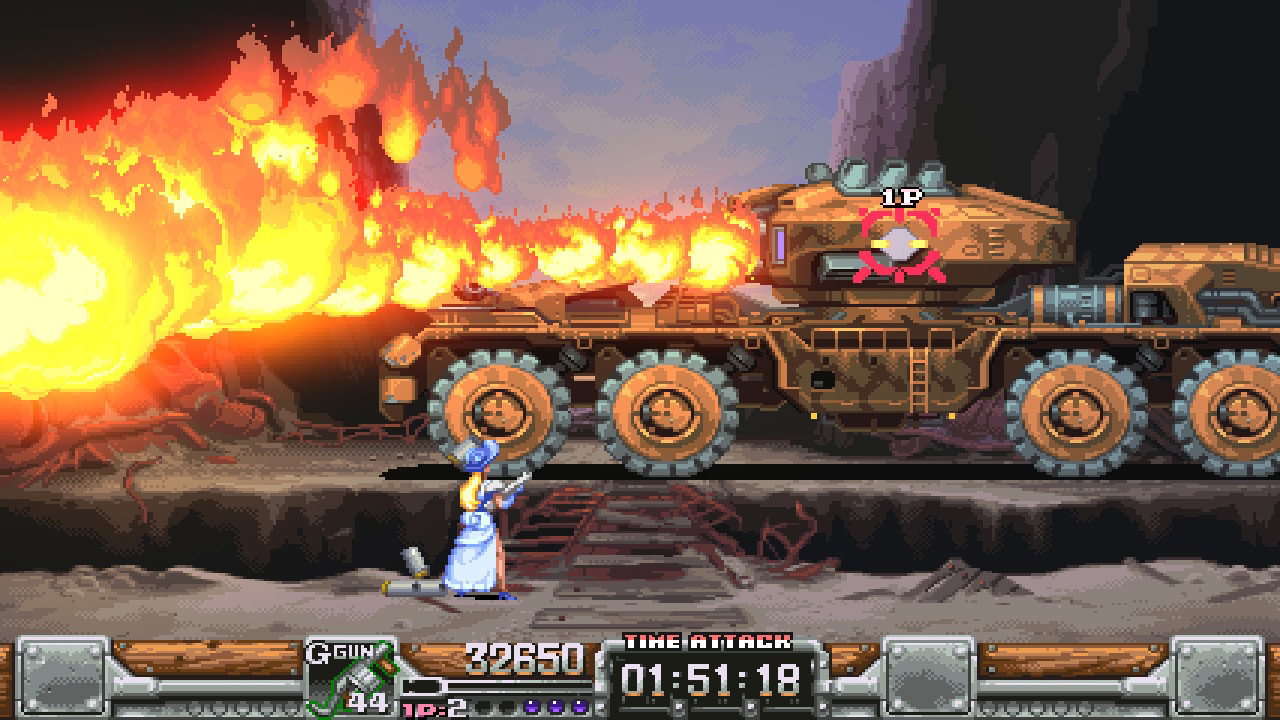 Scores can be uploaded to the online leaderboards where players can compete to be the best. Also new to the Switch versions is Boss Rush: Time Attack mode. This allows players to fight all the bosses in a row to compete for the best time. This mode was made for veterans of the game to allow them to truly show their skill. With the Switch version being portable, it makes it perfect for players that want to practice on the go.

Wild Guns: Reloaded maintains a great art style that has aged well. The pixel art used in the original game holds up and it doesn’t clash with the added visual effects to the game. One of the effects is Doris’ thunderbolt attack, which adds a nice visual flourish of electricity to the screen. The music created for Reloaded is fantastic and matches the energy of the game perfectly. If players are skilled enough to beat the game without continues, they can also unlock the original retro soundtrack. 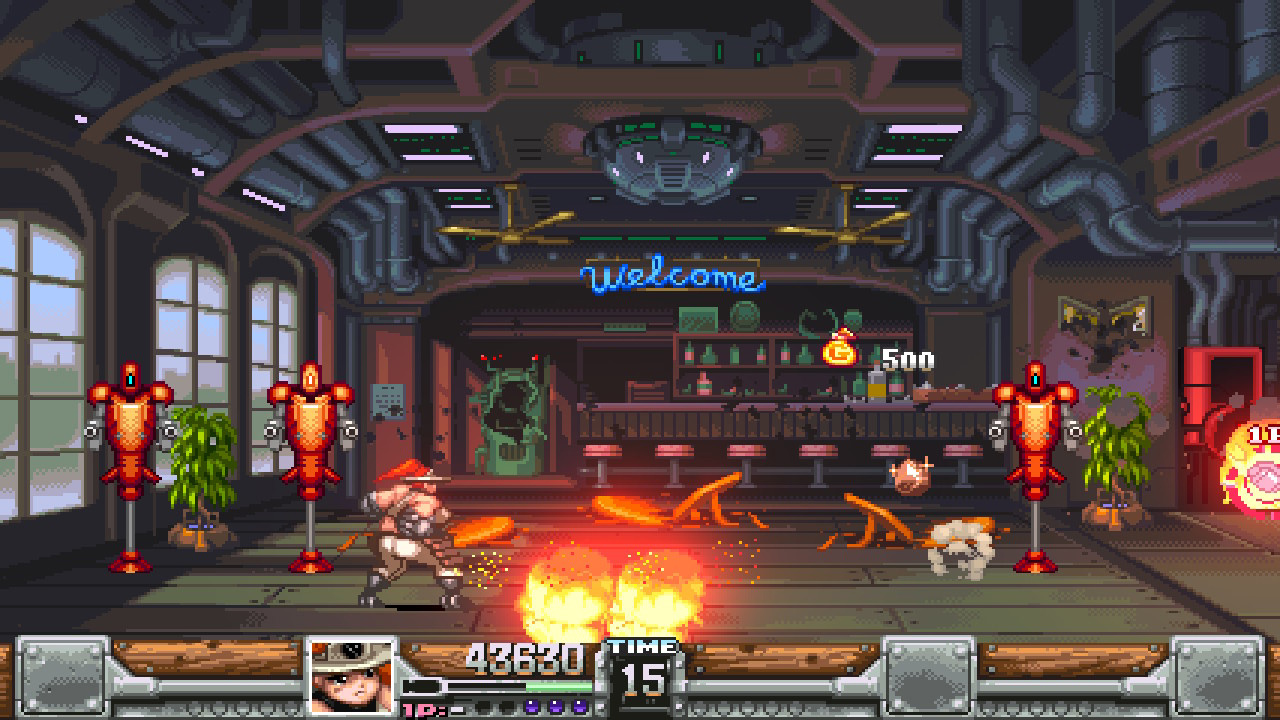 Overall, Wild Guns: Reloaded is a great example of how to bring back a classic. Though it could definitely be more accessible in the multiplayer aspect, it’s still a fun time for fans of arcade experiences. The game is presented well as a classic title and the gameplay gives it enough depth for players of all skill levels. If you haven’t played Wild Guns: Reloaded on the PlayStation 4 or even on PC, then the Switch version is definitely worth picking up.