Kirby is back and now he’s hovering and absorbing his enemies on the Nintendo Switch in his new adventure, Kirby Star Allies. This game was clearly designed with multiplayer in mind, as Kirby can recruit up to three friends to aid him. While this feature is unique to the franchise, it won’t be enough to persuade the naysayers of the pink puff ball that the formula is all that different.

Kirby must embark on a new quest as a mysterious shower of dark hearts plague Dream Land. These hearts corrupt some of its denizens like King Dedede and Meta Knight. As mentioned, Kirby isn’t alone on this adventure, and he can use a variety of allies to assist him. 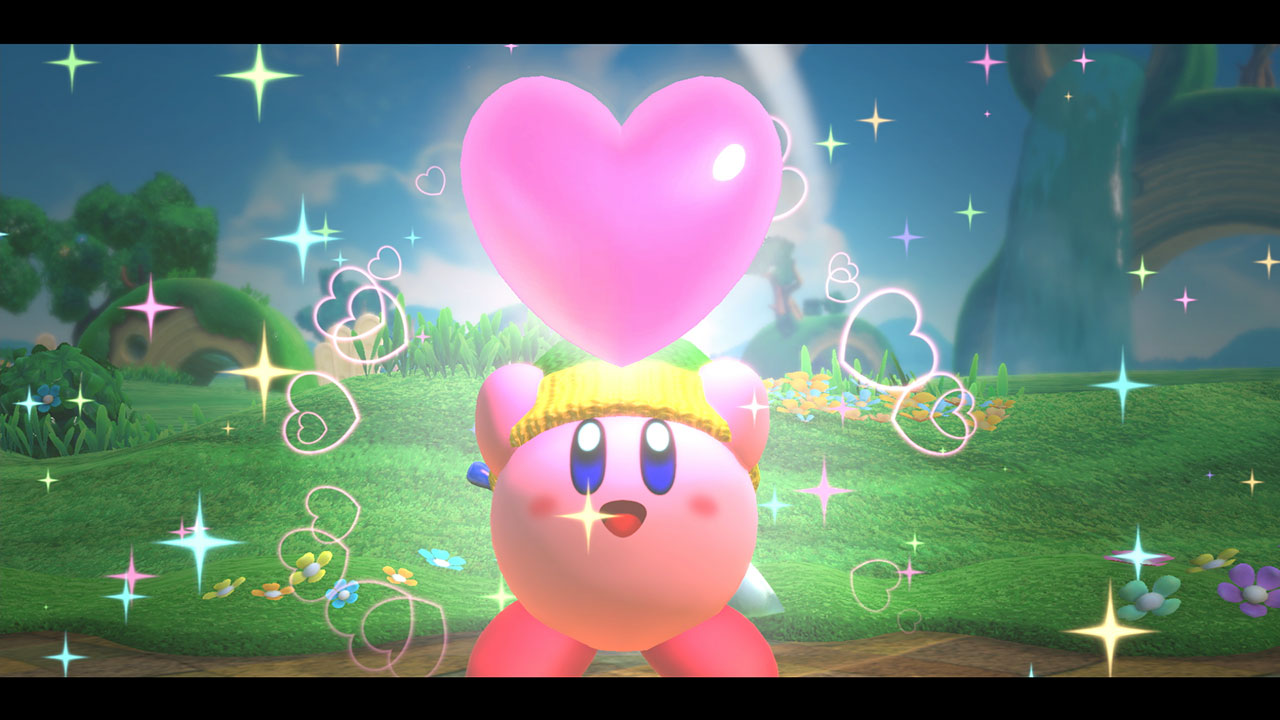 Kirby is renowned for his copy abilities, as he can suck in an enemy and gain its attacks. This time, the franchise staple is taken one step further. Now Kirby can throw hearts at any foe that possesses a copy ability, turning him into an ally. The ally characters play exactly the same as how Kirby would with their respective ability, able to hover indefinitely too.

What makes Star Allies more in depth than other co-op platform games is how the entire game is designed with multiple characters in mind. Most abilities are able to be combined with others either to inflict more damage, or solve puzzles throughout the adventure. For example, if Kirby has the sword ability, he can lift it in the air an ally can shoot fire. This causes Kirby’s ordinary sword to become infused with flames, turning it into the Sizzle Sword. While that increases the attack of the sword, it also helps with many instances that require flames. This includes igniting a fuse or breaking an ice shield. 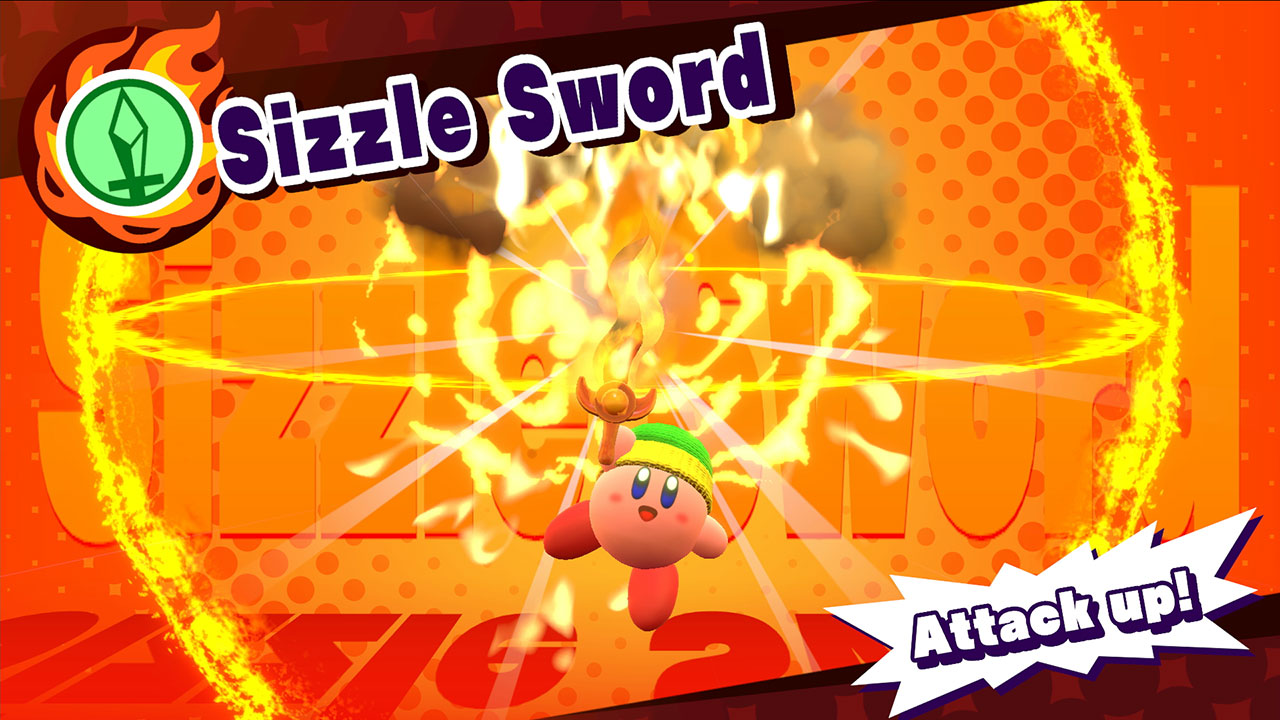 The puzzles in Star Allies are simple, but what makes them good is how convenient and approachable the solutions are. Every puzzle requires a specific set of powers in order to solve it. Thankfully, there are either enemies or copy pedestals that allow Kirby and friends to adapt their abilities to the situation. While it may make solving the puzzle overly simplistic, it does mean there is no need to scour levels for a specific ability and hold onto it before it’s lost for any reason.

The game is recommended to play with human players. While the AI does a great job for most of the time, there are moments that cause the experience to slog. Sometimes the goal is to have a CPU controlled character infuse others with an elemental power. A different character can perform its special move at the same time and interrupt the process. It isn’t a deal breaker by any means, just like having characters get stuck in areas sometimes, but it does further encourage to play this game with friends locally. 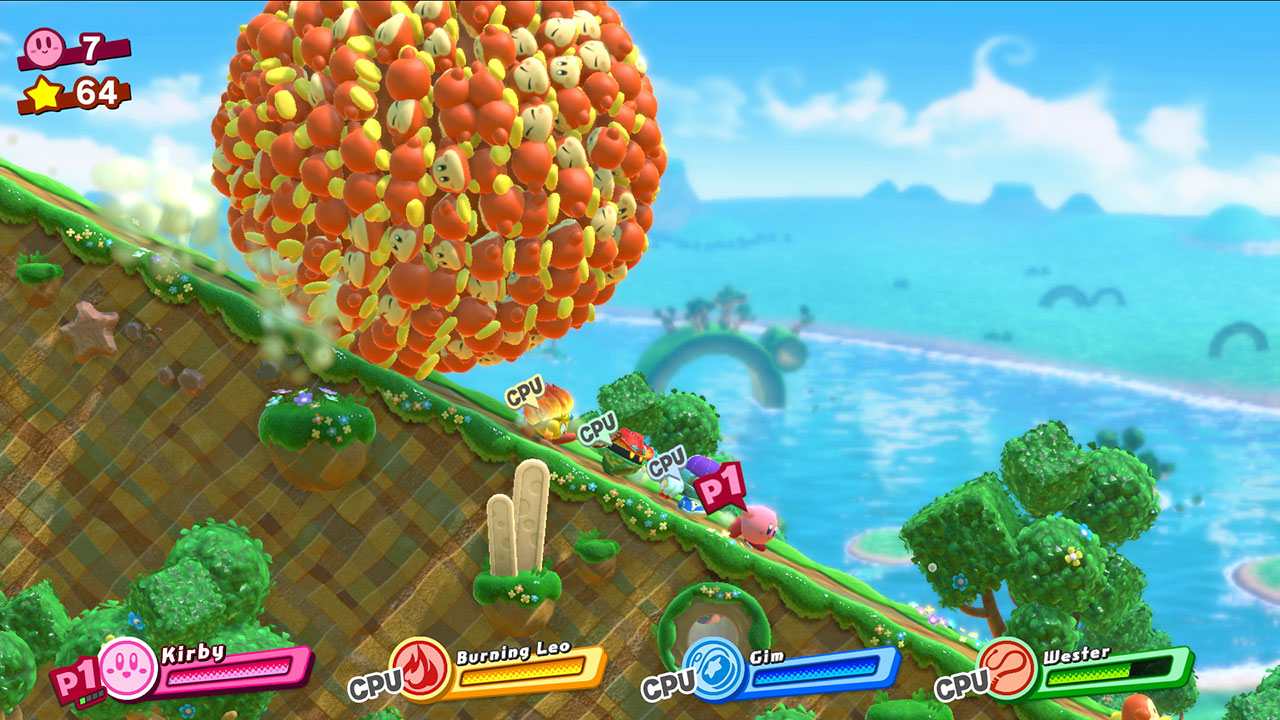 To no one’s shock, Star Allies is an incredibly easy game. While past Kirby games by design have geared towards novice players, this one feels even easier than the rest. Health items are abundant, and it’s very easy to score extra lives either by collecting star bits or 1up icons. While the platforming levels are a breeze, the bosses are surprisingly the biggest pushovers.

Combined powers inflict much more damage than Kirby has ever done throughout his adventures. This makes some boss fights last even less than a minute. It might require more cooperation when playing with friends, but with AI partners, it feels like boss battles play themselves. Moreover, because of the amount of characters on screen, each barraging the boss with flashy projectiles, things get rather chaotic. The last boss is the only one that provides a decent challenge and a change of pace, but by the time you really enjoy that encounter, the game is over. 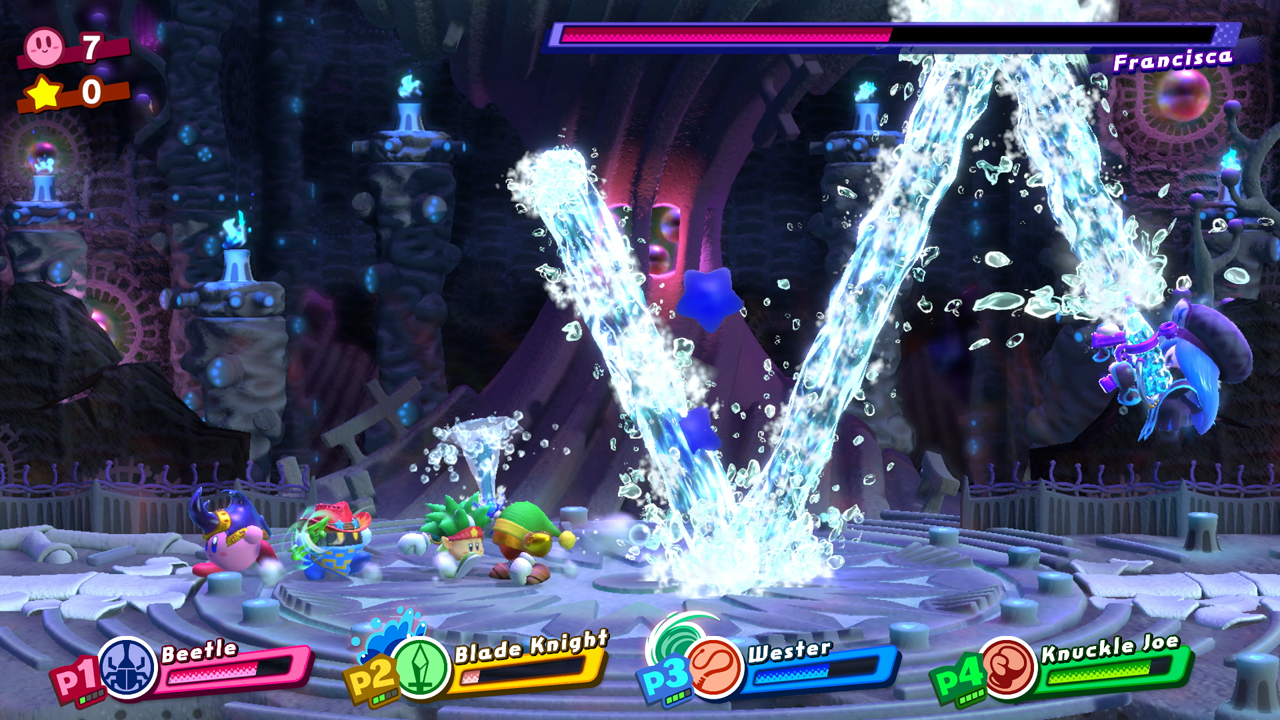 The adventure itself clocks in roughly five to six hours depending on skill level. With only four worlds in total, it feels rather brief. That being said, the idea that the world hub expands as you go is a neat idea, starting from the quiet pastoral Green Gardens and ending in the vast galaxy. While the levels themselves look great, they don’t have many interesting gimmicks like the recent Planet Robobot.

That’s not to say that the game’s levels are completely flat and devoid of originality. It’s just that the gimmicks they do introduce goes against the multiplayer design. Throughout the adventure Kirby and his allies will find pedestals that force them to a team formation, like riding a warp star or becoming a rolling wrecking ball. The only problem is that those moments are controlled by one player thus defeating the purpose of having friends over to play in the first place. There are, however, a considerable amount of levels and each of them have a couple secrets to find. Some hold hidden switches that open additional levels, and others have big puzzle pieces to discover. 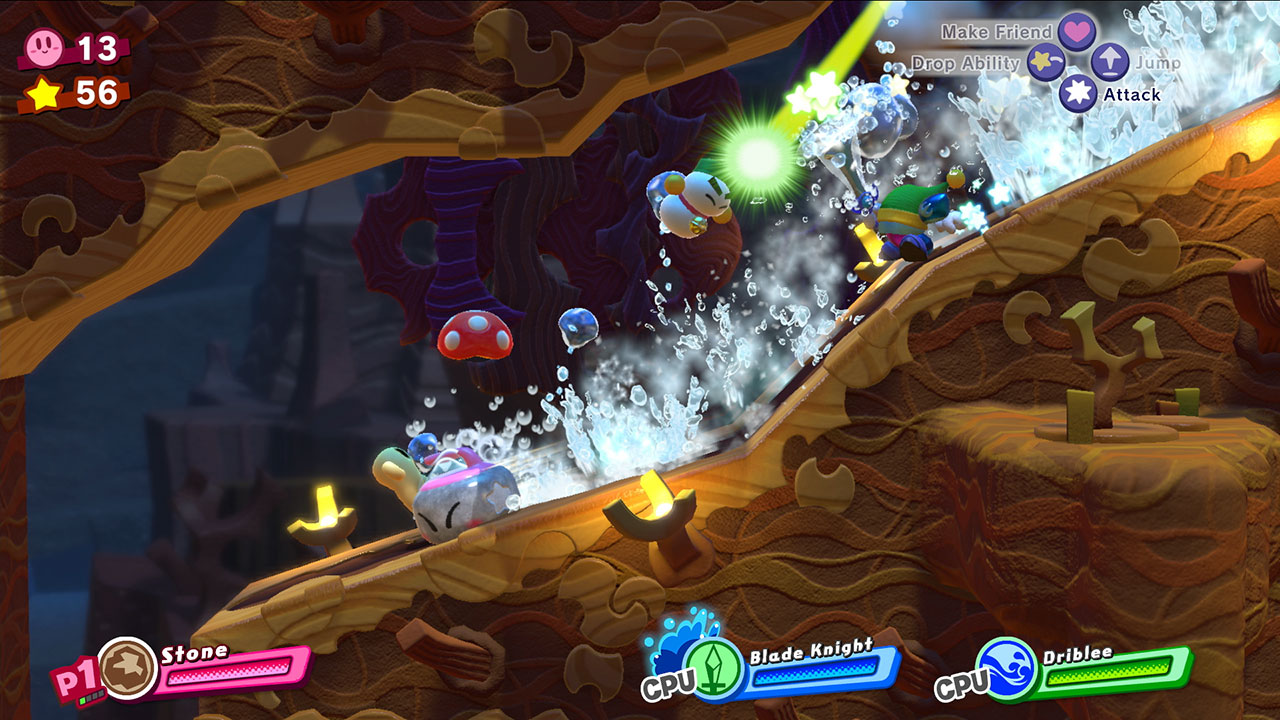 The puzzle pieces are new to the Kirby franchise, functioning very similarly to the 3DS StreetPass game Puzzle Swap. The goal is to collect as many puzzle pieces to fill up a picture and complete the entire album. It is a cute reward especially for those who enjoyed Kirby’s adventures. Unfortunately it doesn’t provide any additional goodies once all the pictures are complete.

Other modes in the game are rather mixed in quality. Both mini-games, “Star Slam Heroes” and “Chop Champs” are little distractions that test your timing and button response respectively. They don’t offer much past the surface of a simple mini-game that could’ve been a part of a bigger collection. The boss rush mode, “The Ultimate Choice”, is a bit more in depth with adjustable difficulty settings. There are even healing items that players can use between each fight to their discretion, similar to the All-Star mode in Super Smash Bros. 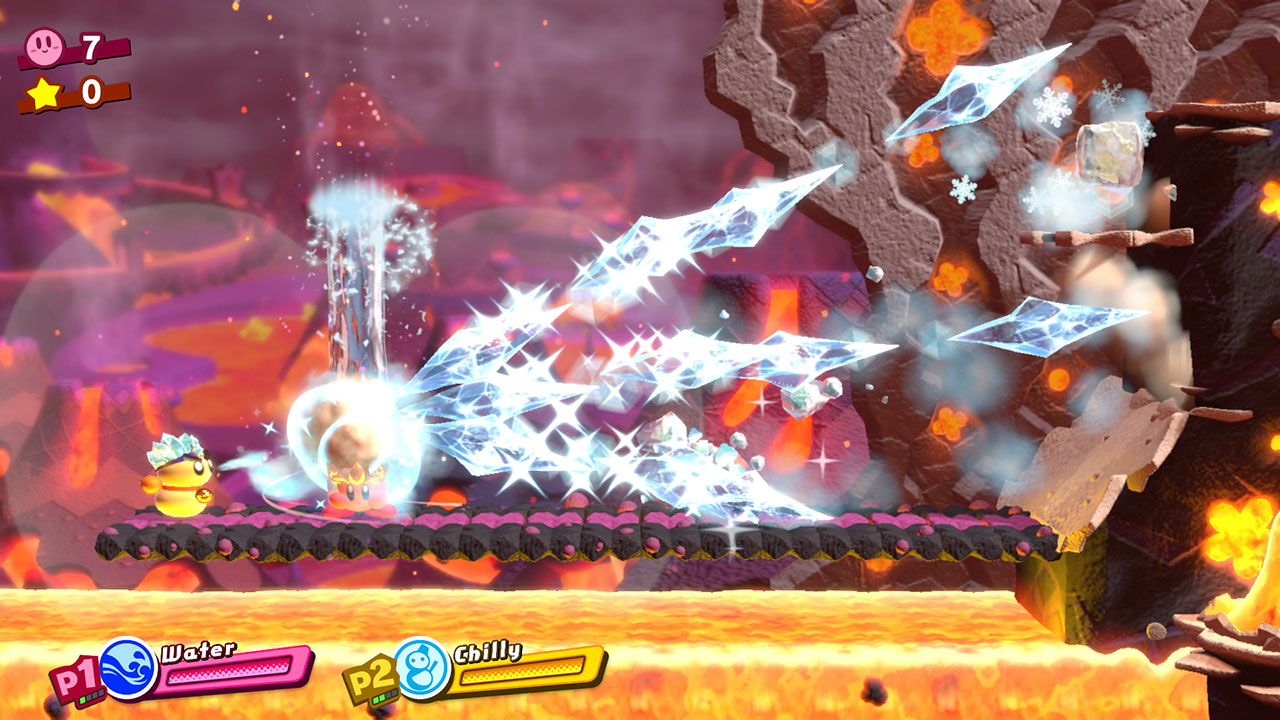 Lastly, the final bonus mode allows players to play the entire game with one of the many allies in one consecutive session. This mode can be a challenge since you are not allowed to change your ability like Kirby, which adds a unique challenge to those who seek it.

Kirby Star Allies looks great graphically. Every location feels lush and alive and the color palette is as wide as ever. The autumn landscapes, with their orange hue, particularly stand out. However, the game does run at 30 frames per second as opposed to other Kirby games that have managed to run at twice the frame rate on less powerful consoles. While it’s not game breaking, it is a shame higher frame rates couldn’t be achieved on the Switch. The soundtrack is good, but no tracks really stick out aside from the new renditions of classic Kirby tunes. The exception would be the final hidden level, having one of the best musical surprises in recent memory. 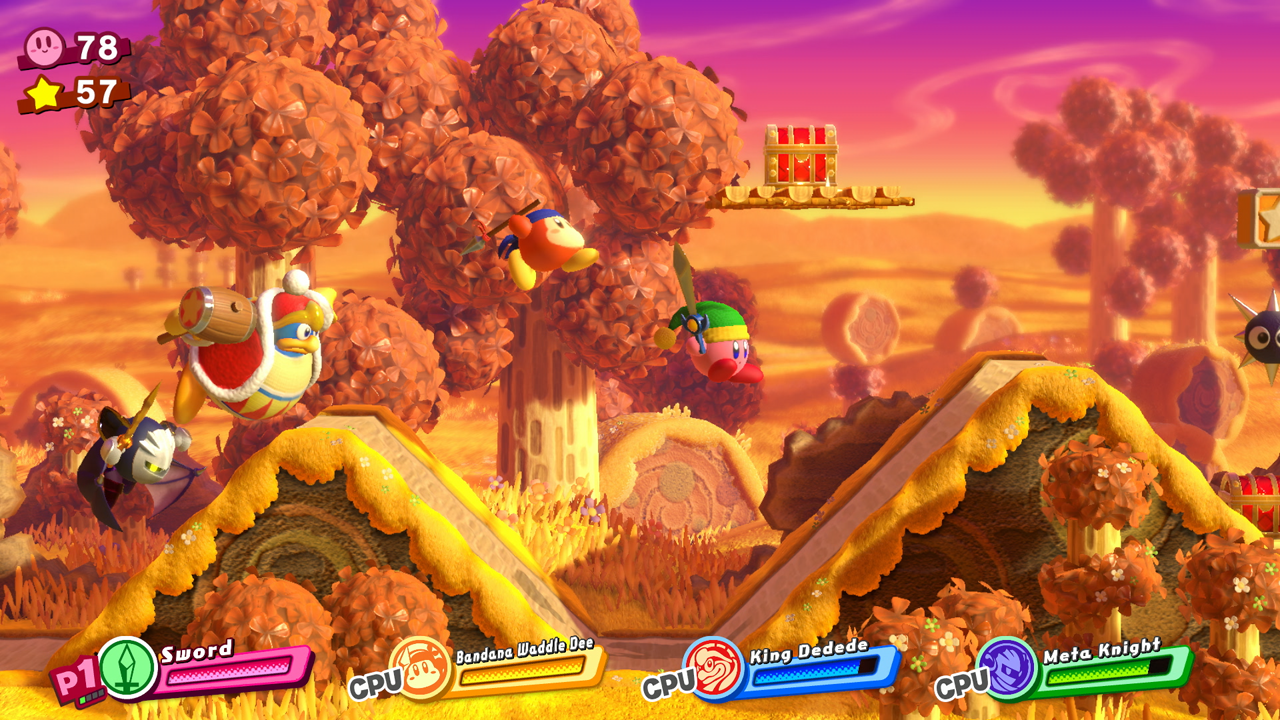 Kirby Star Allies started feeling like a slog for how easy and mundane the adventure felt at times, but despite that I wanted to see myself to the end of it as it does have some neat mechanics with the many possible team formations. I do highly recommend this game for Switch owners that are new to video games.  Especially for people that enjoy playing with friends and family. However, more experienced gamers won’t find much in Star Allies to makes it stand out from the rest.