Season two of Batman: The Telltale Series has been a very interesting approach to telling a Batman story. It’s taken Telltale nearly eight months to get Batman: The Enemy Within down to this finale. While the journey has had some rough patches, the destination certainly made it all worth it. After the last episode helped set things in motion, it gave way to what is likely the most important episode in the series. Since this is a narrative focused game, there may be minor spoilers ahead. Reader discretion is advised. 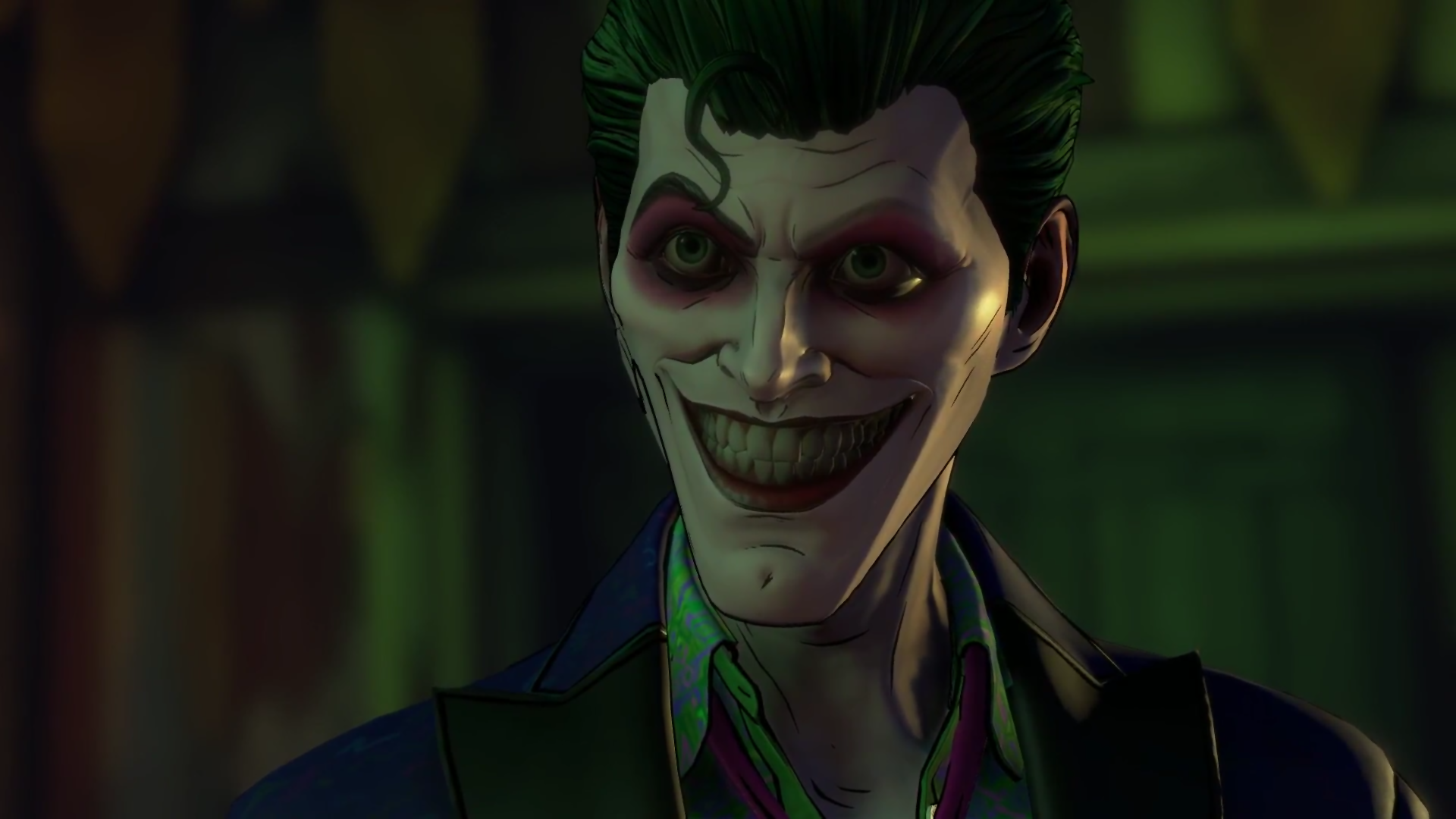 Not since the third episode of the first season with Harvey Dent has there been such a difference in results. Same Stitch takes things quite a bit further, ending up as one of Telltale’s most ambitious episodes to date. With more writing than the entire Dark Knight Trilogy, this finale lets players see the fruit of their hard labor. That fruit of course being the birth of the Joker, however he may be depending on the choices made.

Despite this episode being a large focus on the Joker, it admirably tackles other character moments left unresolved. Players will get to have a rematch against certain foes. They’ll get to rekindle several relationships. They’ll even potentially take on a protege, which adds a nice dynamic to the game. That last part is actually one of the unique things that players might enjoy out of this episode. 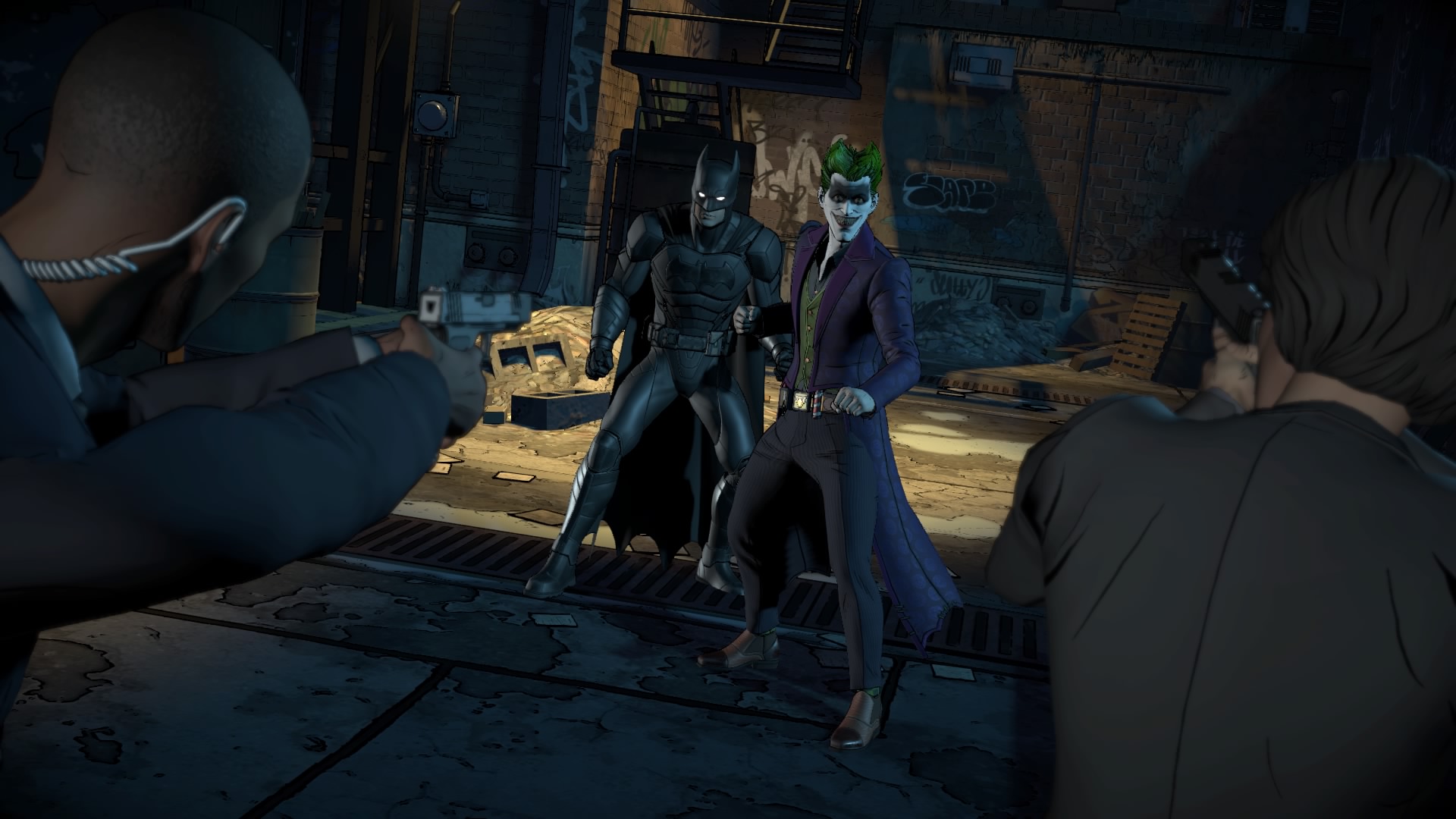 Depending on how players treated Tiffany Fox, she may join Batman on an investigation. Tiffany adds a technological element to the detective work, giving control over the crime scene like never before. The other potential sidekick however, is in fact the Joker. Depending on how the player treated John Doe throughout the season, they may have John end up idolizing Batman. During this idol-worship, he may take on a vigilante role himself and work to impress the Dark Knight. His nature is pretty chaotic, and without the same rules as Batman, it might take a lot for a player to keep him in line.

The Joker may be interesting as a vigilante, but the villain side is also incredibly captivating. Given the knowledge that this version of the Joker contains, it makes him incredibly dangerous. He’s ruthless, but also playful at the same time. Anthony Ingruber really rides a fine line between Heath Ledger’s portrayal and Mark Hamill’s infamous voice. His performance is rather amazing in it’s own right, exceeding expectations of this iconic character. 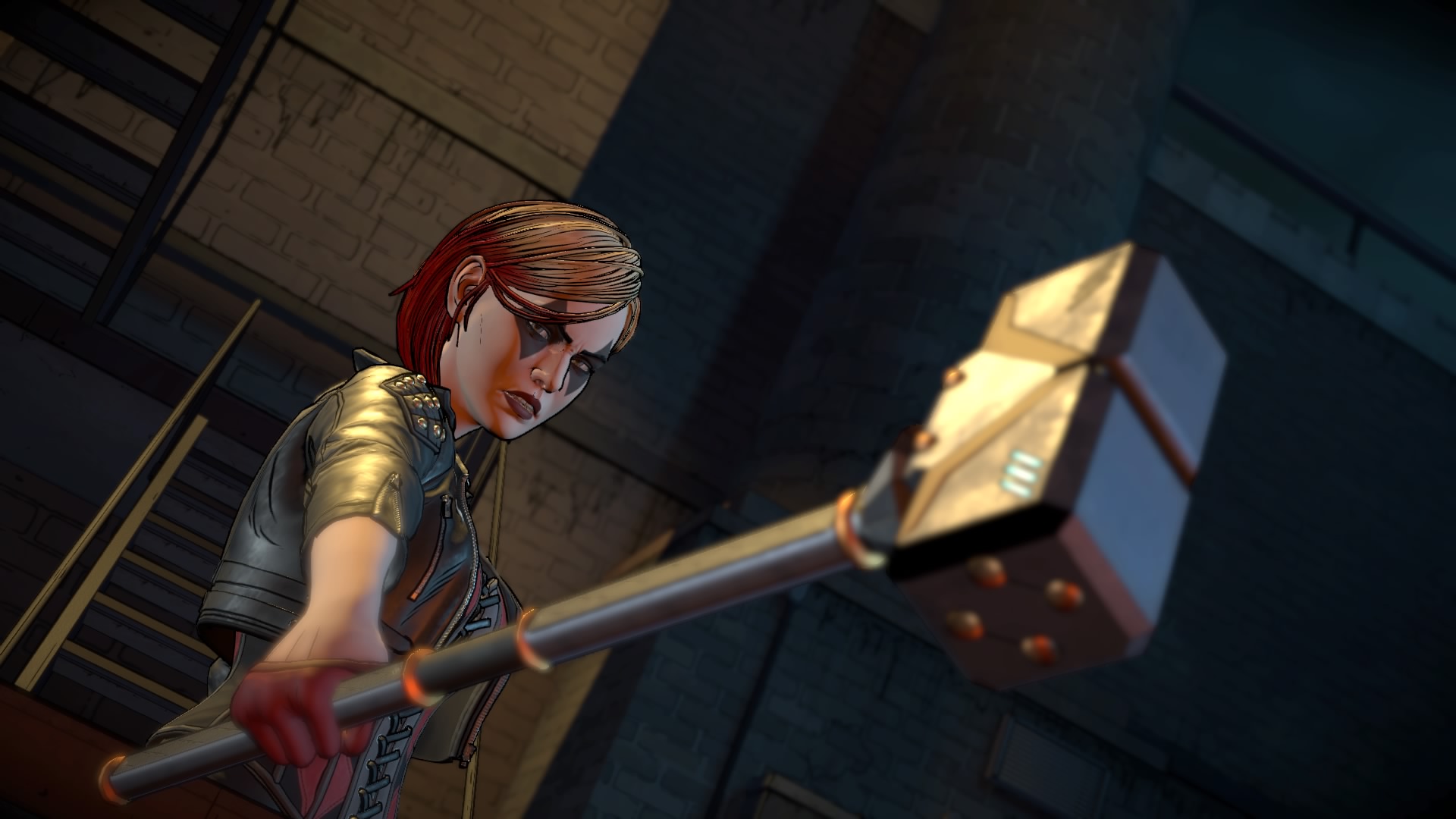 The two sides really do make quite the difference to the episode. Not only will Joker himself be different, but certain settings, characters and events will change as well. For example, Harvey Bullock will appear in the villain story, but he’s nowhere to be found in the vigilante side. It’s actually hard to say which side is better, as both are equally engaging. The only downside is it will require playing episode four again to make the change. To get the long-term changes however, it requires playing the majority of the series again. For the results that come up though, it may be worth it.

Moving away from the story a bit, it’s worth noting just how good the presentation was for this episode. From beginning to end, in both scenarios, the writing, visuals and acting was always on point. This episode had arguably the best action sequences in the series to date, easily surpassing the fights in the season one finale. The animation is solid and the episode strikes the right balance of humor, drama, and thrills. It’s also worth noting that Telltale has seemingly mastered their new engine at this point, as there were no technical hiccups to be seen at all in Same Stitch. 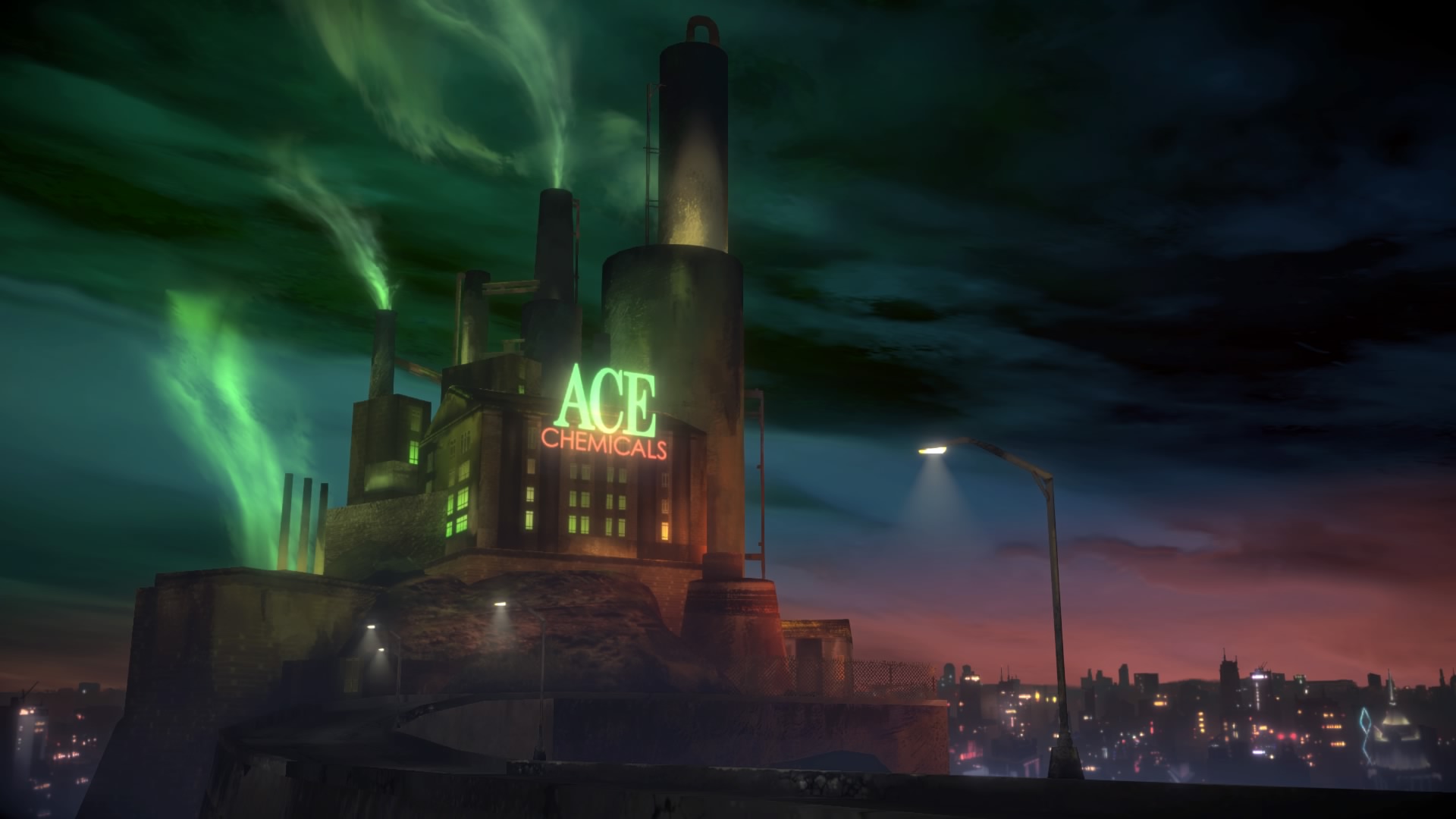 In a previous review for episode three, there was the question of who the “Enemy Within” was. That question never gets a true answer, though it does narrow down to two likely candidates. How clear that answer ends up being is up to the player. Whatever the case, this finale worked well for the season. It brings everything together in a neat little purple package with a green bow.

Perhaps the biggest question that comes up from this episode is “where do things go from here?”. Tackling the Joker is obviously going to be a landmark in the story of Batman: The Telltale Series. Things definitely start to crumble a bit towards the end of the game, especially for Bruce. Allies may leave him, enemies might be made, and room is left for new stories to be told. It’s quite the interesting universe that Telltale has in their hands. Hopefully they can maintain this level of quality with a potential third season. 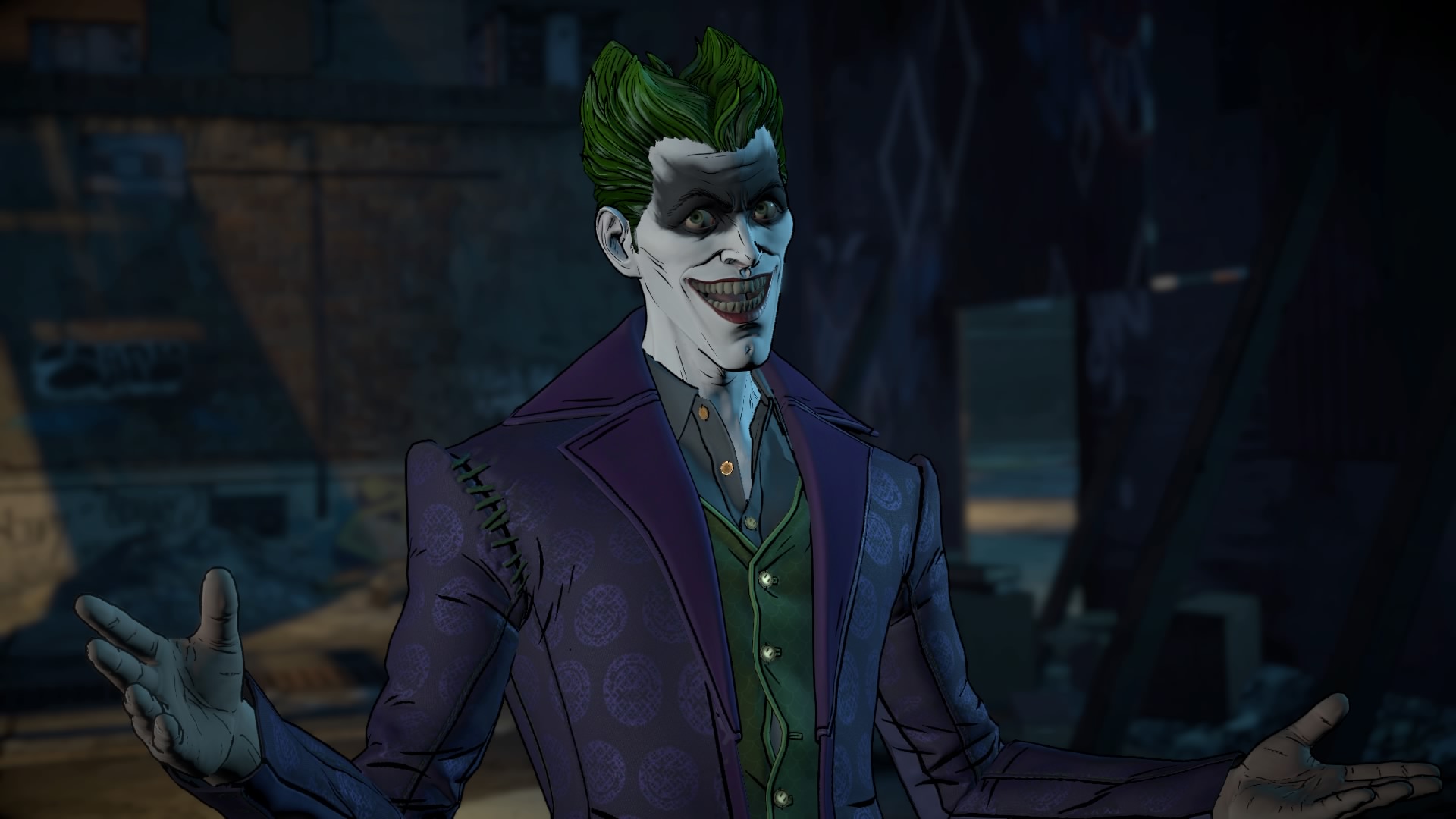 With the Joker finally born and Batman’s life in the hands of fate, Batman: The Enemy Within ends with an everlasting smile. Telling a truly interesting story with lots of depth, the full deck is here, and the Joker is a wildcard. The player’s hand has been dealt, and now they just have to play it; it’s far too late to fold. This is your Batman creating your Joker, and the end result is a completely satisfying experience.