This review is coming in a bit late, but better late than never. Capcom released Monster Hunter: World to critical acclaim late January, and since then, they’ve been providing a lot of free events and updates. It’s done well for them, as it’s gone on to become their best selling game ever. This is even before the inevitable PC release that is slated for later this year. The Monster Hunter series has become bigger than ever with this title. How does it fare over almost two months later?

I’ve only put in just over 60 hours into Monster Hunter: World, and I’ve just barely scratched the surface. The game is packed to the brim with content, and Capcom is continuously adding more for free. On PlayStation 4, this included the exclusive Horizon: Zero Dawn content, as well as a Street Fighter V event that hit both consoles. Other events include variations on quests, including larger monsters to hunt, or even bigger quantities. 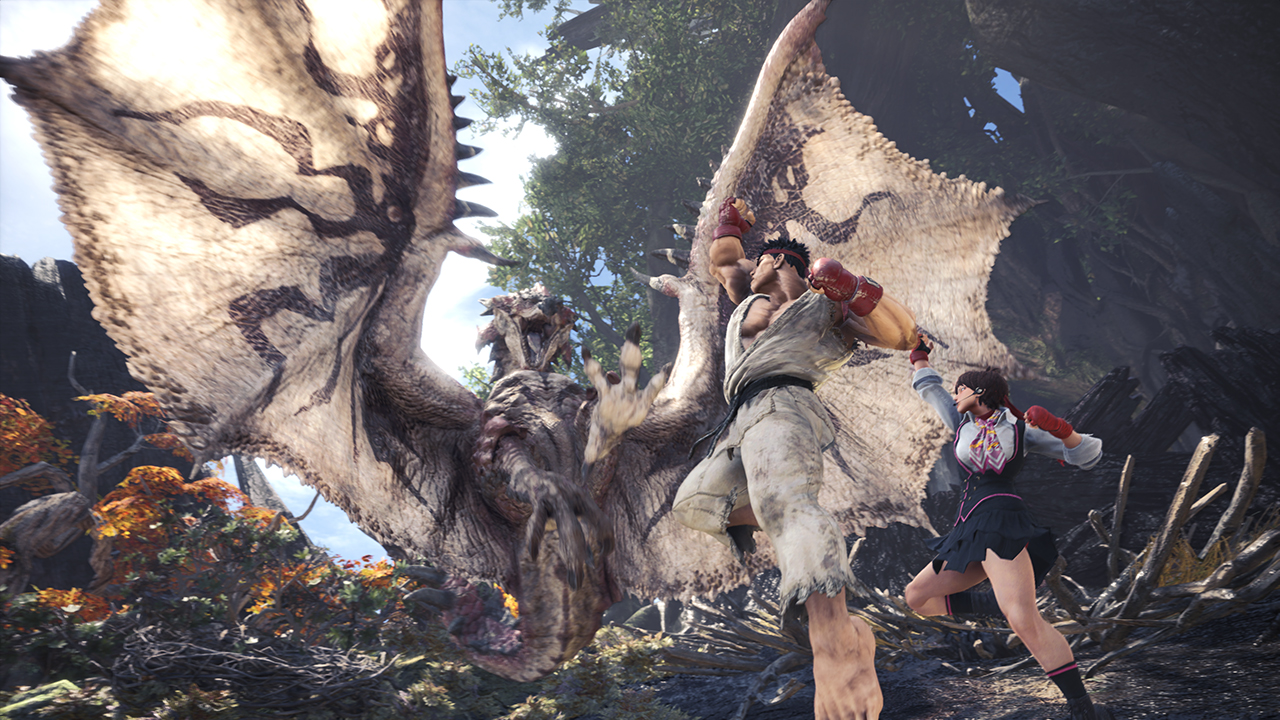 Monster Hunter: World has a clearer narrative than ever in the series. Full cutscenes to move the story along and even to present the monsters during their first encounters. The gameplay is also a lot more accessible with various new additions like the slinger. Perhaps the biggest game-changer is the addition of the scoutflies. These little bugs light up nearby objects for players to discover or collect. This is especially useful for monsters, as scoutflies can also track targets after discovering their tracks. Not only is this helpful for newcomers but it helps to save time even for veterans of the series. 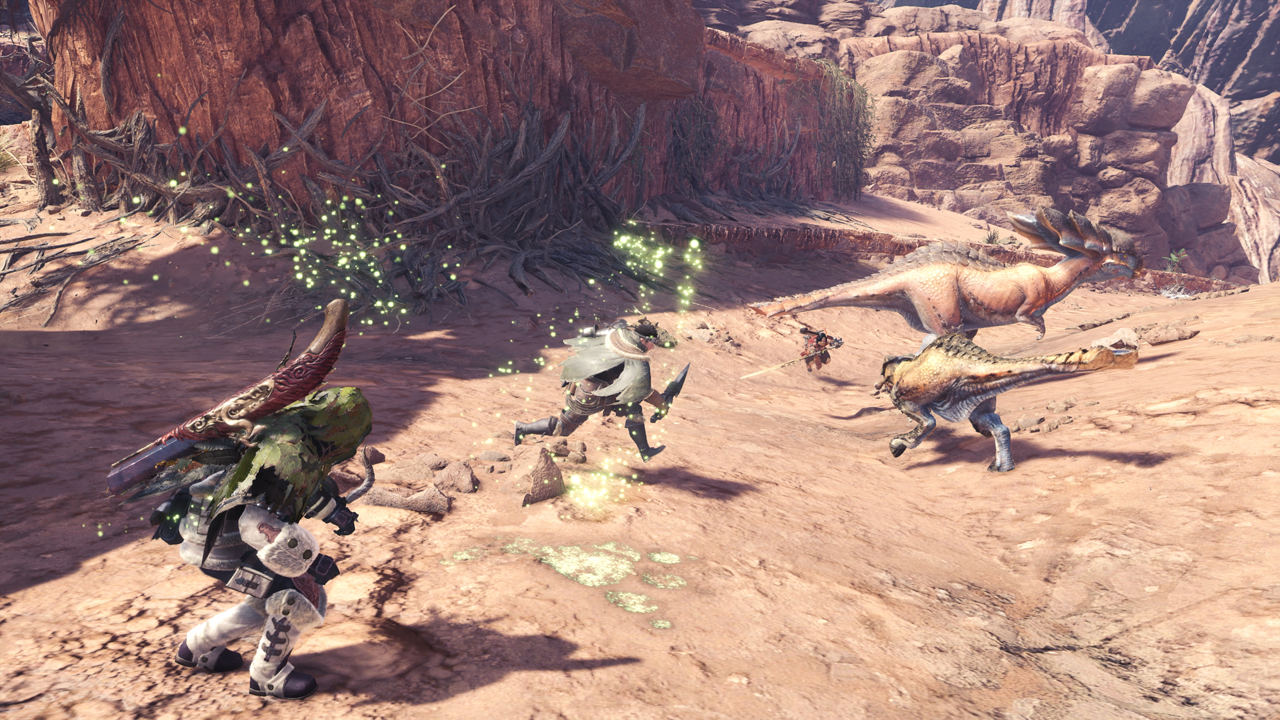 Time is a valuable thing in Monster Hunter: World, and in the franchise in general. Obviously, there are the time limits that each quest will have, but there’s also the unavoidable grind. Monster Hunter, no matter how you look at it, will always be a grind. World does well to mask it with the stronger emphasis on story, but it becomes necessary in the later half of the game. When stronger and more troublesome foes rear their ugly heads, hunters need to adapt to take them on. This can mean crafting new armor, weapons, and even changing your entire strategy to combat the threat.

Adapting is a big part of Monster Hunter: World, as it not only applies to hunters, but to the monsters too. World thrives on a living and breathing habitat. The game has a wonderful ecosystem that all the creatures live in. They scavenge, they mark their territory, and they adapt to their surroundings. Great Jagras eats an Aptonoth whole and brings it back to it’s young. Weaker creatures get to safety when Anjanath or Bazelguese are on the offensive. The fact that Monster Hunter: World removes the load times between zones helps this significantly. It makes the environments feel more complete, as well as more connected. 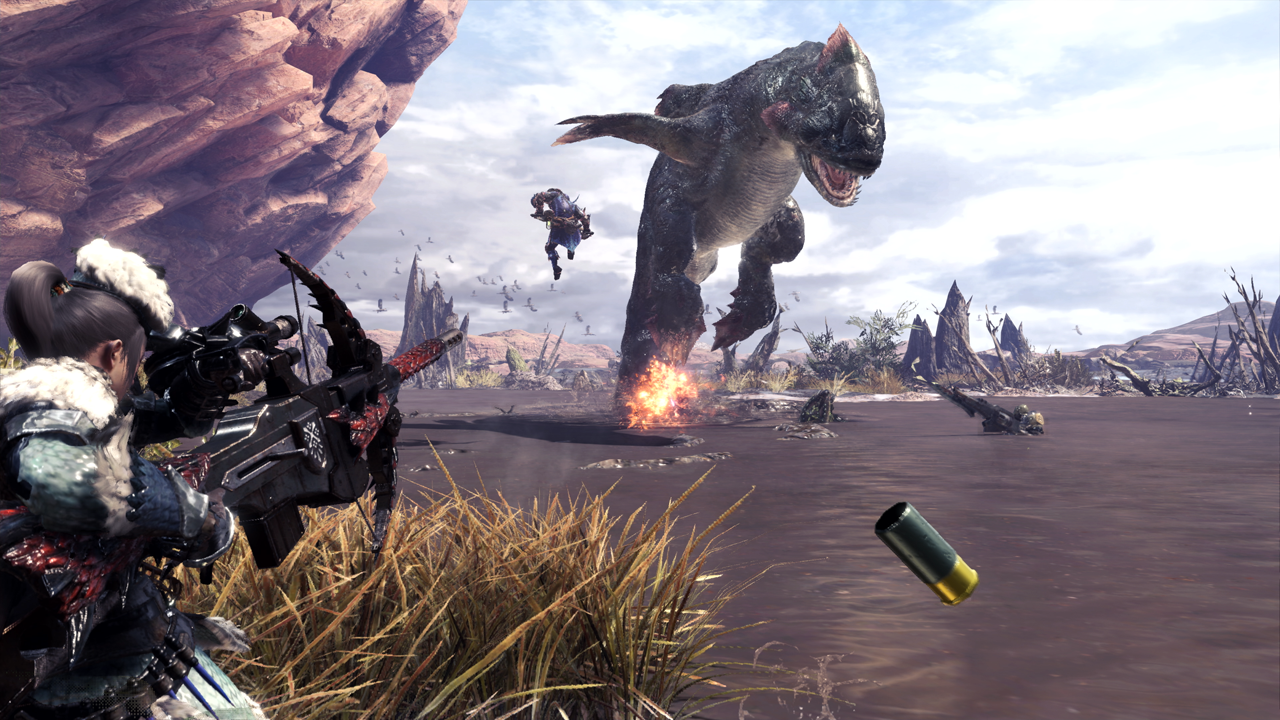 Getting to the combat, gone are the hunting arts introduced in Monster Hunter: Generations. Instead, World takes a simpler approach. Using the PS4 or Xbox One controller makes it easier to work with the weapons of Monster Hunter. Attacks are fairly simple to pull off, but mastering more advanced techniques takes skill and practice. Things like mounting monsters using the environment, or using combos effectively can be incredibly rewarding. And that’s another thing that makes Monster Hunter: World special, as the game takes the time to teach players about this world.

Using the scoutflies not only helps to track monsters, but they further your research on them as well. Monster Hunter: World manages to make players create an encyclopedia on their own by doing their various missions and collecting more information. This can uncover weaknesses, carved materials, and even quest rewards. It helps players learn about the mechanics a bit more and even how to properly hunt the monsters they want to. That’s important too, because there are more parts than ever to use to craft your gear. From monster parts to gems, there are tons of rewards that players will need to make themselves stronger. Utilizing investigations helps out with this immensely, especially with the tempered monsters. 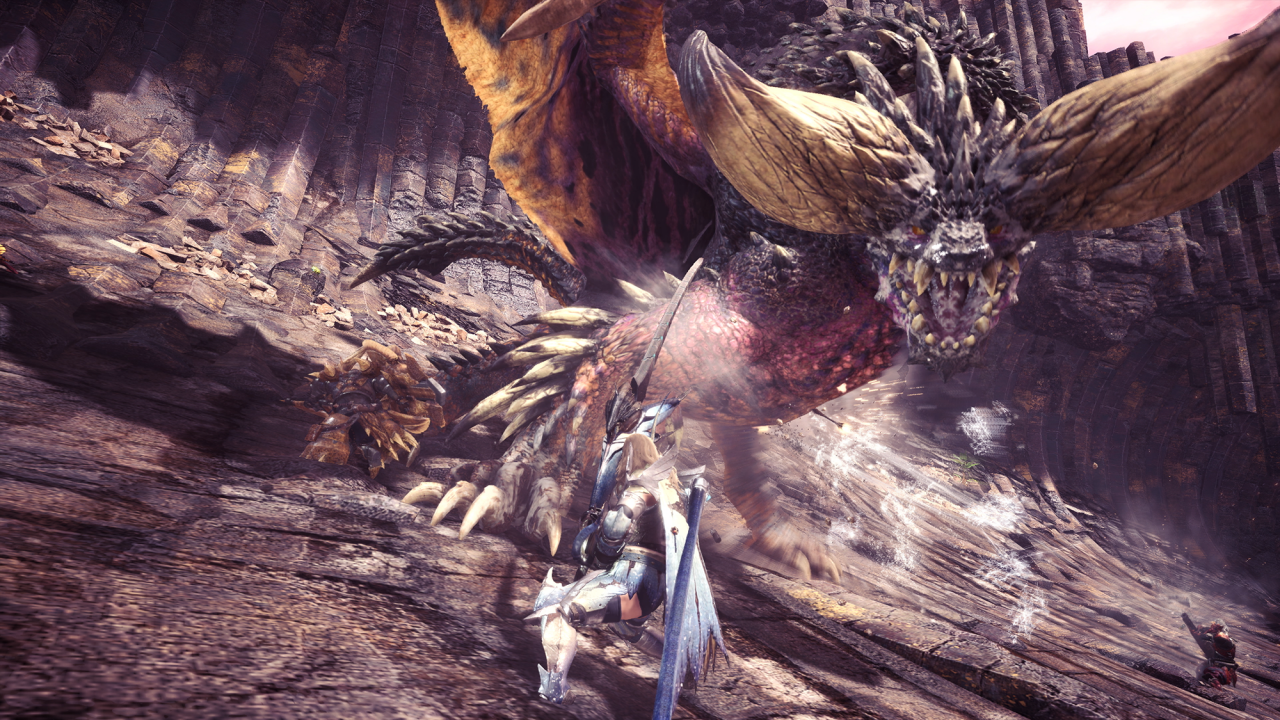 While Monster Hunter: World plays like an action RPG, there are quite a few differences. The biggest difference is that players don’t gain progress to becoming stronger after each hunt. Power is achieved by crafting, and crafting is done by carving parts off tons and tons of monsters. This is where players will either like or hate Monster Hunter. Some people can’t handle the grind and though World does the best job with it, it’s still a possibility. It can even come down to a point where players will simply carry others through the game to help them get the parts they need.

That’s where the multiplayer comes in. Monster Hunter has always prided itself with having a strong and robust community. World makes it easier than ever to play a multiplayer quest with the new SOS feature. In the middle of a quest, players can launch an SOS flare and summon allies to aid them in their hunt. They can still party up before the quest too, but the fact players can drop in during a quest is really useful. It can make a challenging monster easier to handle, but it can also cause frustration. Some problems have come up with players contradicting certain goals, as some players will wake sleeping monsters, kill instead of capture, or even impede players from using their weapons to effectively break down monsters. Capcom is working on ways to make this better, but playing with random players will always bring these types of risks. 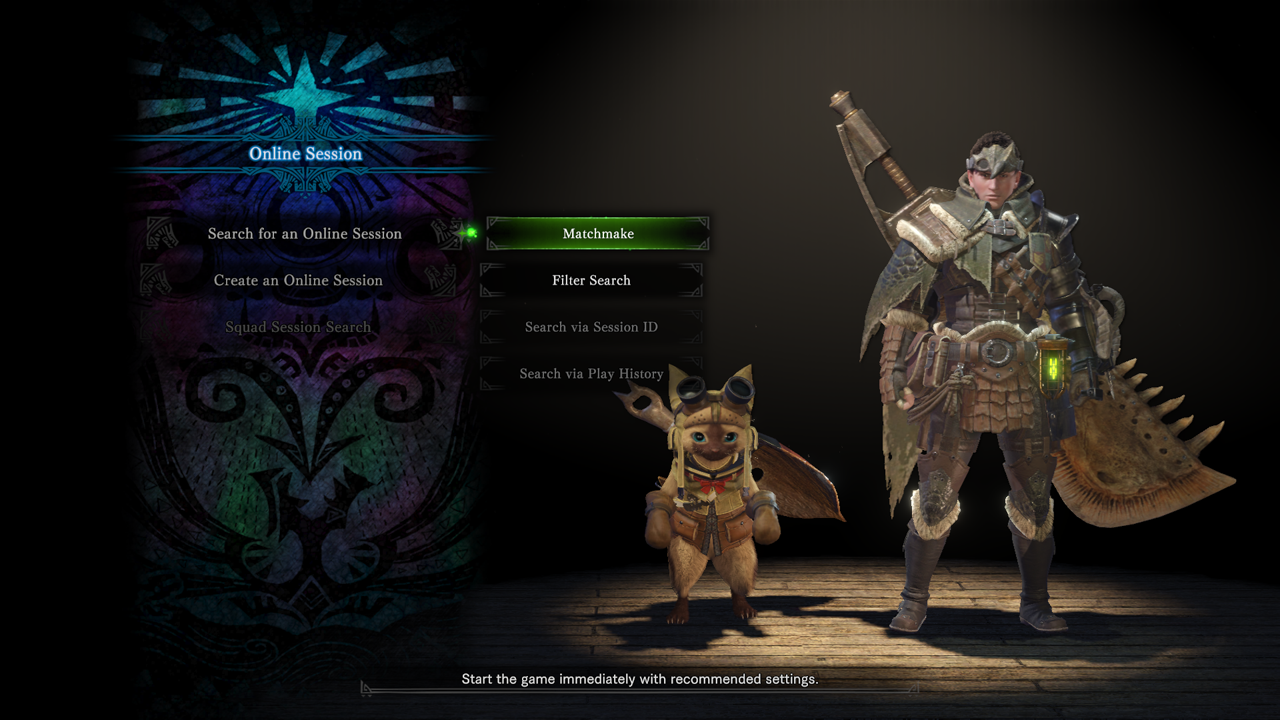 Arena quests are another way to have some multiplayer fun. They’re even nice to experiment with since they provide specific gear options to choose from. Perhaps your main weapon isn’t an option, so it’s time to pick up the Hunting Horn. Maybe try out different items and realize just how effective they can be in for certain situations. A lot of the arena quests can be challenging, but bringing a buddy along makes it that much more interesting. Get a good time and you can even rank among the other players in the world.

As far as Monster Hunter: World goes as an entry in the franchise, it does well to cater to fans. There is a free gesture pack to download with the infamous “prance” gesture. A Poogie wanders around Astera’s tradeyard, Palicoes put on a show to cook your food, and the Gathering Hub is more lively than ever. The music is new yet familiar to fans at the same time, offering variations of the main theme as well as new music to get hunters in the mood to take down epic beasts. Various sound effects will also be familiar to fans as several classic sounds can be heard throughout the adventure. 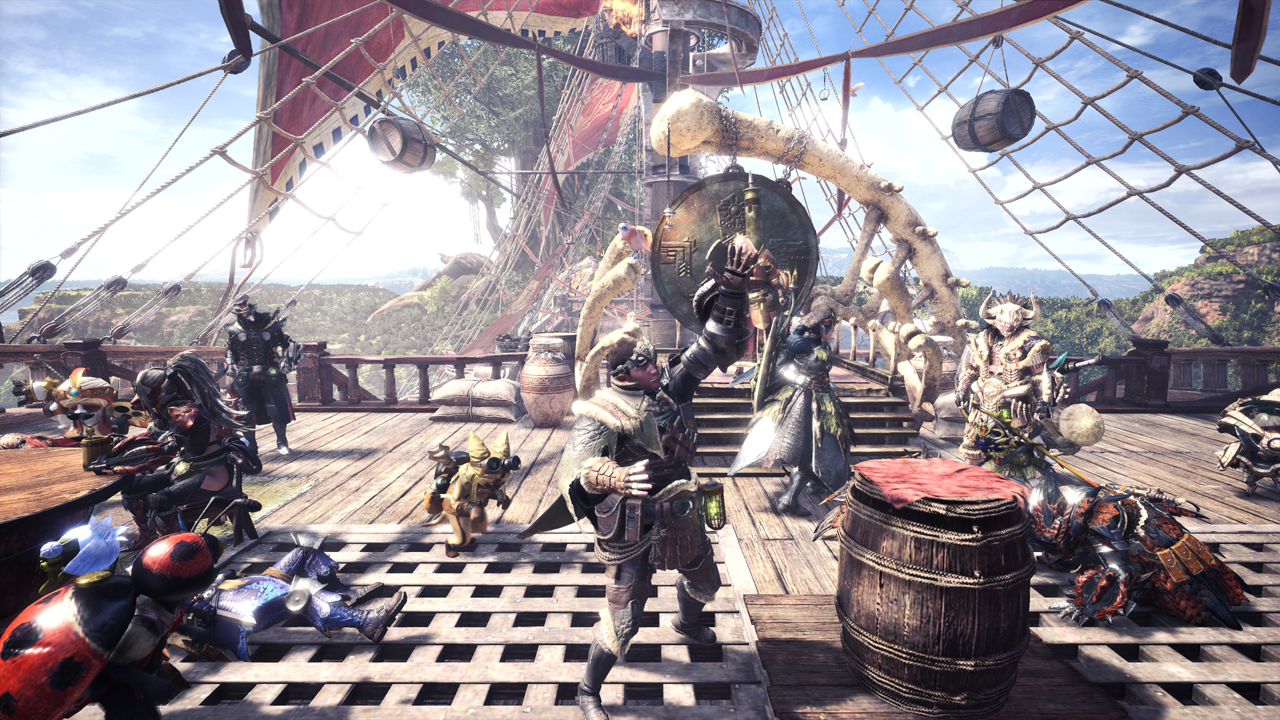 It seems that there is plenty of content to keep hunters satisfied. Monster Hunter: World is filled to the brim with quests, investigations, and several events. Multiplayer is easier than ever and the game offers tons of ways to experience this franchise, be it for the first time or for a series veteran. It’ll be interesting to see how things go with the PC version. More powerful hardware can offer better performance and enhanced visuals. We’ll have to see if Capcom can maintain this momentum going forward. For now, Monster Hunter: World is a great entry in the franchise and worthy of a purchase.