Review | The Void Rains Upon Her Heart

“If we could see love, what would it look like?”. This is the first line a curious player is dealt if they care to explore the “gifts” menu just before starting the main story of The Void Rains Upon Her Heart (TVRUHH). It is a poignantly placed line, portraying a question the aesthetic before us begs to answer. With slow moving, flowery-ambient pixels chiming in your ears, the journey begins.

TVRUHH is the story of a “Zaraden” woman, a fairy-like alien it seems, who was so ugly she couldn’t be loved. The only company she might keep was that of frightening monsters. She doesn’t give up, she adapts, and learns to love the monsters around her, but more importantly, to make the monsters love her. 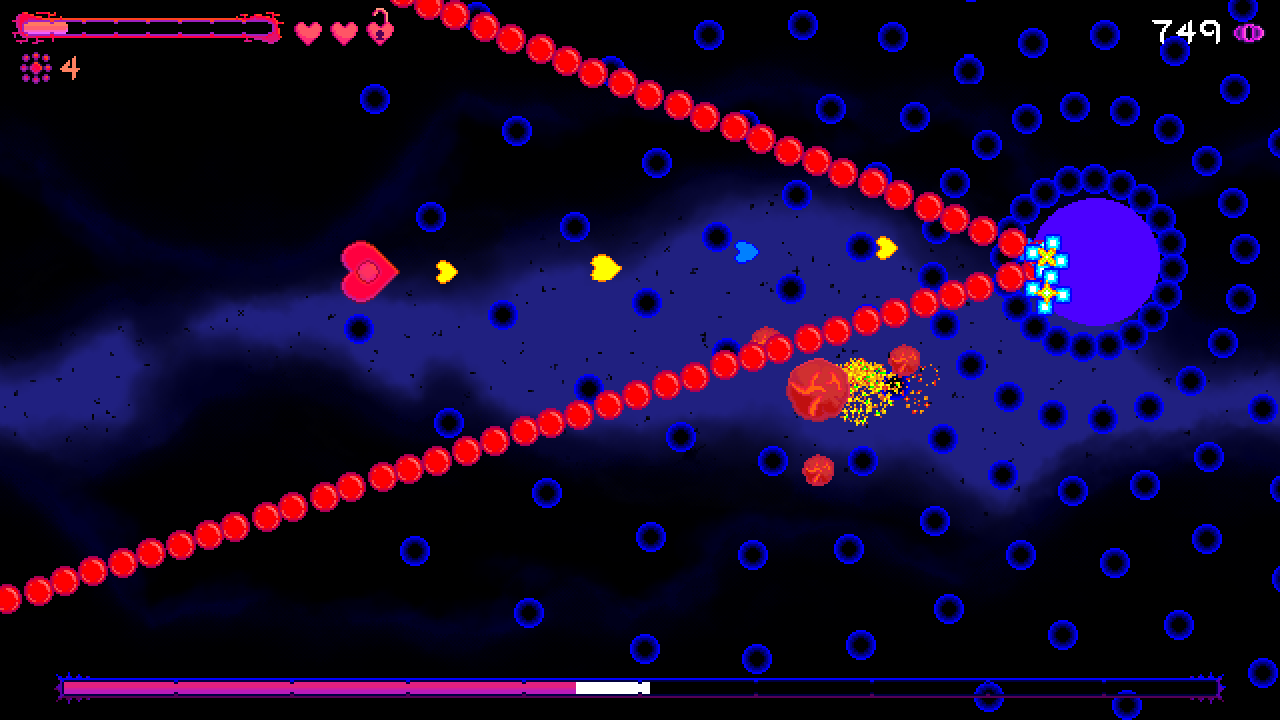 The game narrates the story using faint blue lettering with soft sounds depicting the girl’s story most of the time. However, lines appear written in red, abrasive lettering with a harsh sound to accompany it. It’s as if the storyteller is both good and evil, just as the emotions of our adaptive main character. Very human… for a space fairy.

When she decides to make the monsters love her, the evil and discouraging red typography pours in with a screen full of mocking “HahAHAhaHahaaHAHahaHahAa”s, and chills are sent down this reviewer’s spine. This is the beginning of chapter one. The arcade music gets dark and heavy as I’m forced to choose “my first nightmare”, beautifully titled “Fear the Unknown”. 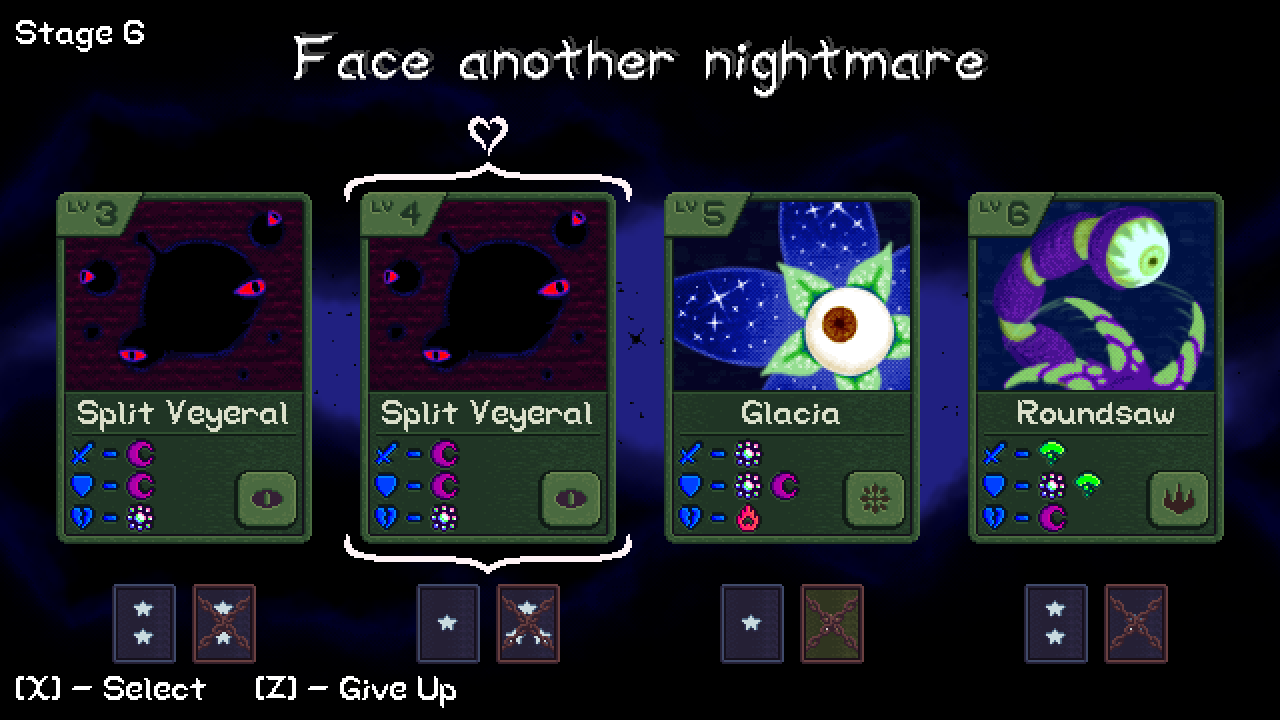 I was skeptical about this game at first. I usually don’t pick pixel-art games with two-dimensional arcade gameplay, but I have no regrets here. The writing, music, and artwork are on point with its metaphorical theme. With the setting in place, I am eager, yet afraid, to begin the Zaraden’s journey.

Players control a heart that has a constant stream of “love bullets to make the monsters love you”. The concept is both hilarious and cool. The game itself makes fun in a refreshing and intelligent way by saying this isn’t a metaphor. You are literally doing this. Movement is on a 2D landscape facing one monster at a time. The player is forced to lead their shots while dodging incoming attacks. Meanwhile, the music is simply amazing, blessing this reviewer with chills by just the second combat sequence. 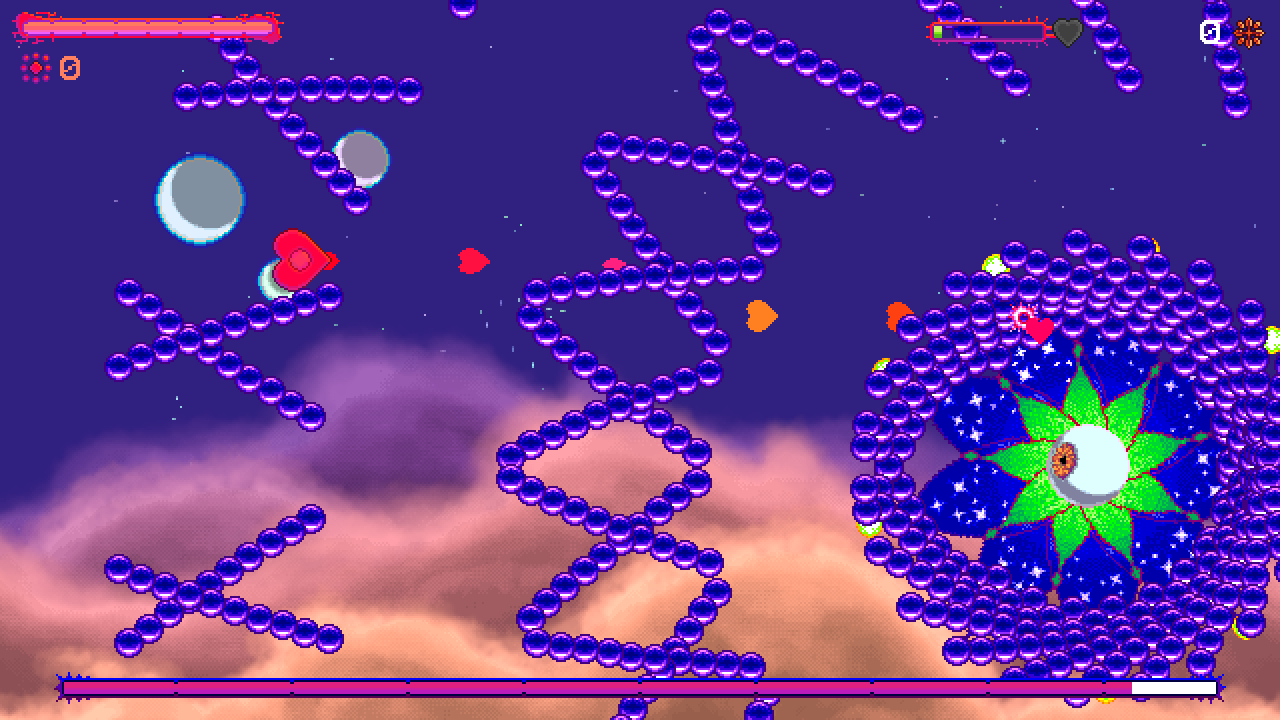 Tunes change up for each fight as well; there’s a full album here. A good album. Music here feels dark and fuzzy, yet bright and sharp, sounding foreboding yet hopeful. It’s no wonder that you can unlock each track throughout the playthrough. TVRUHH is a challenging game which allows the user to decide if the fights are going to get more difficult, or less based off of the level of the monster chosen to fight.

When you first fail, which you will fail, that evil red lettering comes in to mock your attempts at mending your broken heart. Then the player is forced to start from square one in classic arcade game fashion. In that way this title is difficult and unforgiving. However, the option to face less challenging monsters fixes this potentially game-breaking error while leaving the more hardcore options open for higher skill levels. Harder game modes await to be unlocked upon completion of the game as well. 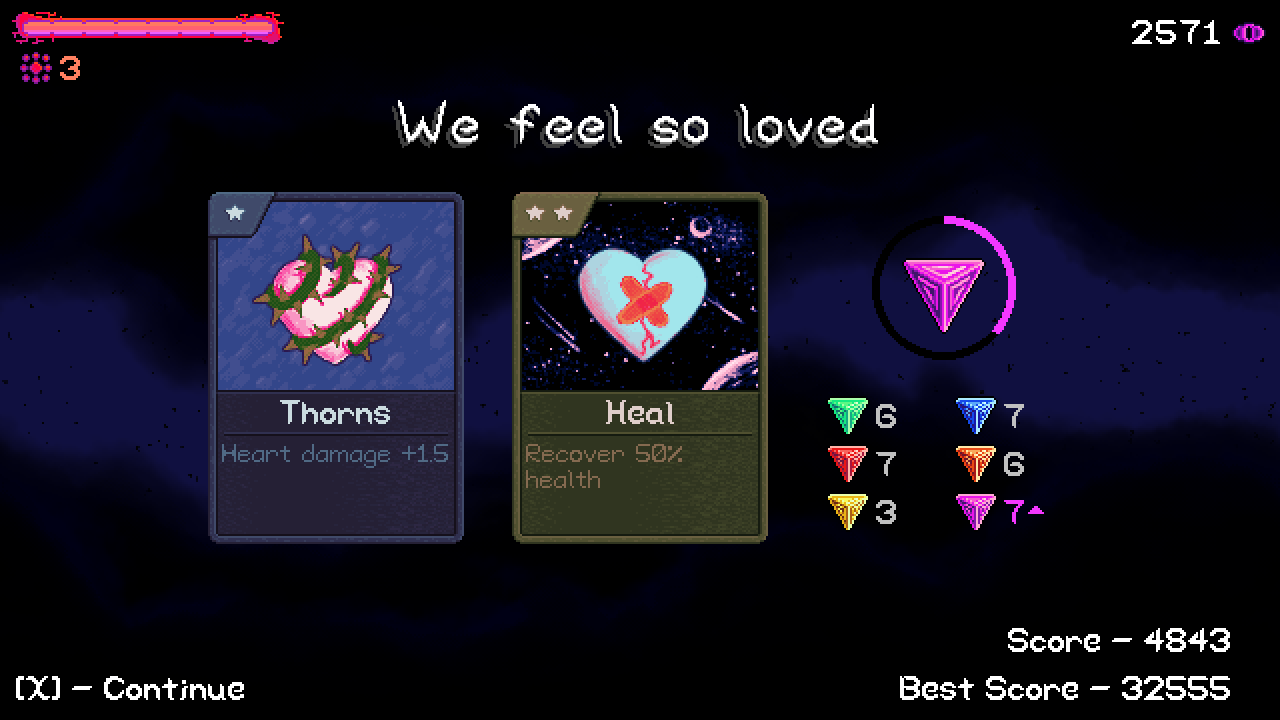 Having failed just a few times, I have come across three of the same monsters twice, some of the designs of which are simple circles with eyes on them. On the other hand, one monster was a radical praying mantis-human-fairy-looking thing. It’s hit or miss on the monster design. Each monster gives specific gifts (abilities), with special objectives in place for more powerful gifts. The stage is set to give players the option to make these monsters “love you harder”.

As stated before, this title’s writing is on point. It is dark and sardonic, serious and quirky. Every objective your Zaraden is faced with, every challenge, is a symbolic one. The more the monsters love the main character, the higher her “karma” score gets. The higher the karma score, the better chance the player has to receive more powerful abilities from future fights. Karma increases the number of enemies to choose from before battle, so one may target which gifts they aim to receive more easily. 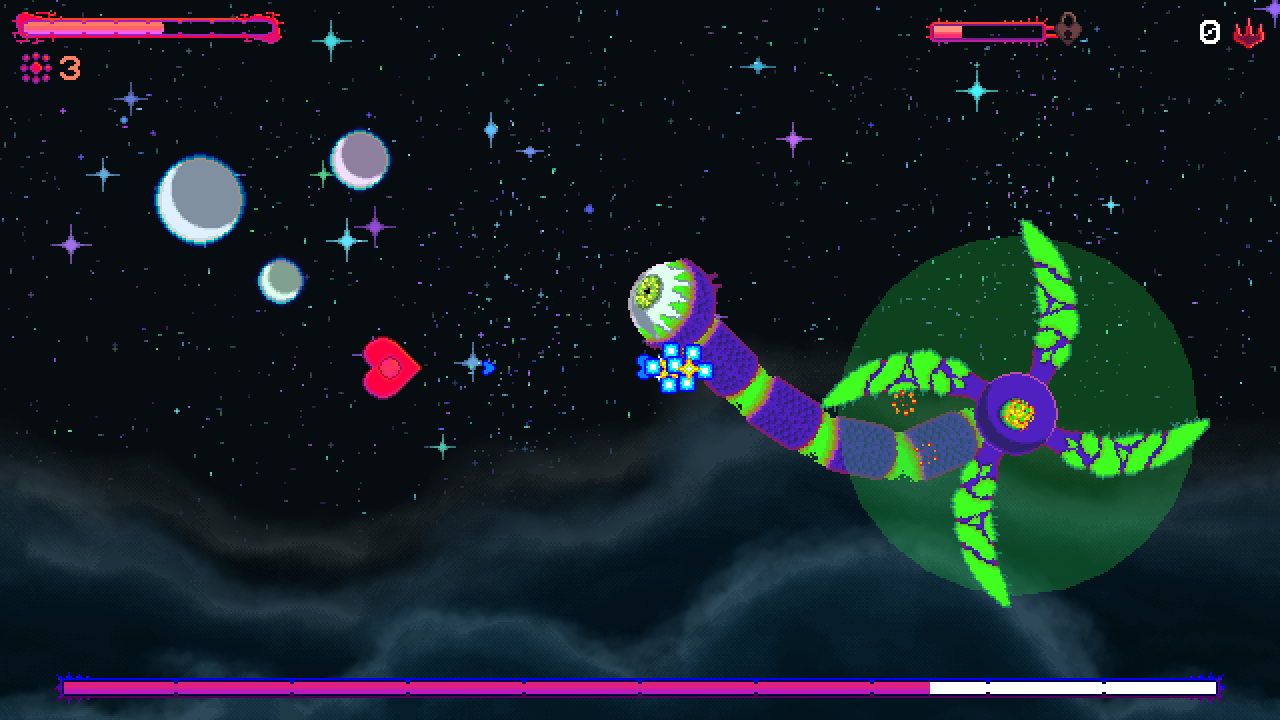 There is something about fear of the unknown, love, and the ability to adapt which define humanity, or at the very least to define intelligent sentient beings. This would explain the emotional backdrop of TVRUHH and its plot, that it matters not if any Zaraden loves our main character, it is that she can love, and even make monsters love her, no matter the cost.

While this game was a little too difficult for me to keep playing through more than two hours of failing, I do wish to return to it. I mostly want to see where the story ends up. The music, the writing and artwork gets a 9/10. Truly fantastic. If just one, not two of the first five enemies I faced were spherical, this game would have 10/10 for visuals. Still very good. For the gameplay, I give it a solid 7/10. It’s hard for a 2D arcade game to impress me in the gameplay department. I would recommend TVRUHH to anyone with an affinity for pixel aesthetic and ironic/dark humor. This is a must have for any arcade style, 2D loving gamer out there. Seriously, if that’s your jam, buy this game.