Continuing on from our previous coverage from the Bandai Namco preview event, we have impressions from a few more titles. This time, we’re going to post impressions from both Naruto to Boruto: Shinobi Striker and the Switch version of Pac-Man Championship Edition 2 Plus. We’ll also post a bit of coverage on Code Vein, even though we didn’t get a chance to play it. 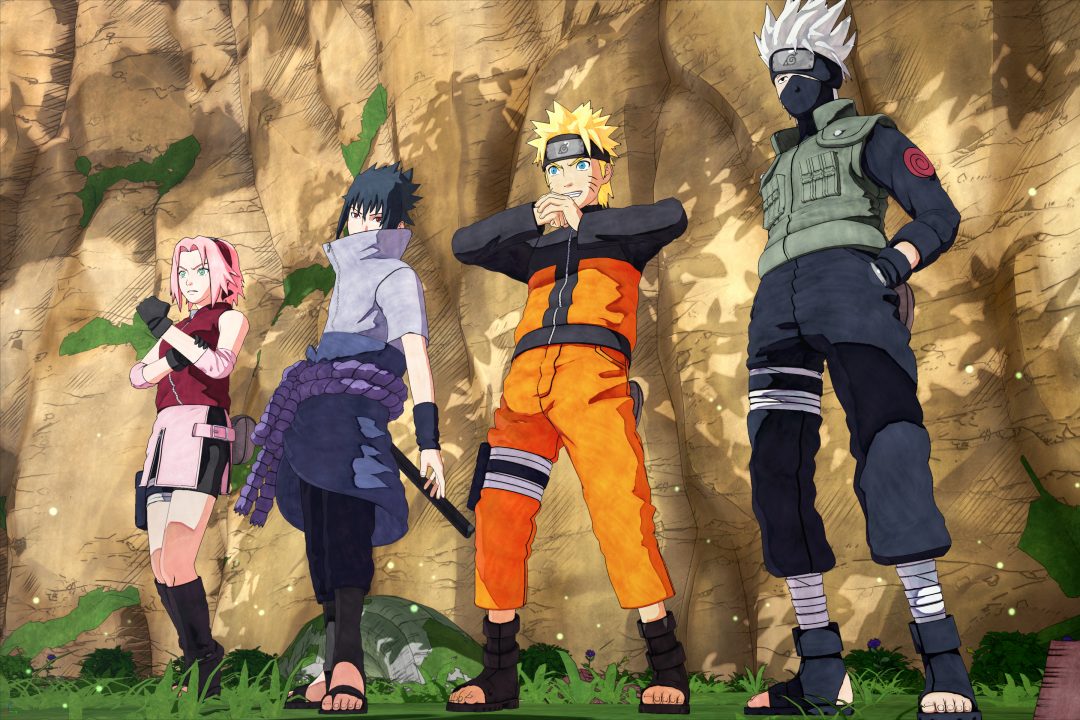 The Naruto Shippuden series ended nearly a year ago, and quite possibly the Naruto: Ultimate Ninja series with it. Despite Shippuden being over, the Naruto legacy continues with Boruto: Naruto Next Generations. With that being the case, it seemed like a good time to explore new games for the series as well. In comes Naruto to Boruto: Shinobi Striker, a new game from Soleil Ltd.

With a graphical style that feels reminiscent of a manga cover, Shinobi Striker introduces a new look for Naruto games. Though CyberConnect2’s Ultimate Ninja style will be missed, Shinobi Striker looks great in motion. With a muted background palette and vibrant colors for the characters and effects, actions truly pop with a satisfying look.

What really sets Shinobi Striker apart is the ability to create a custom ninja to play as. Though we couldn’t create a character for our demo, there were four premade ninjas to select from. In addition, we were able to choose from Naruto, Sasuke, Sakura and Kakashi, the original Team 7. Each character has an associated class: attack, ranged, defense, and heal. Together, these classes can make a balanced team for 4-on-4 matches. 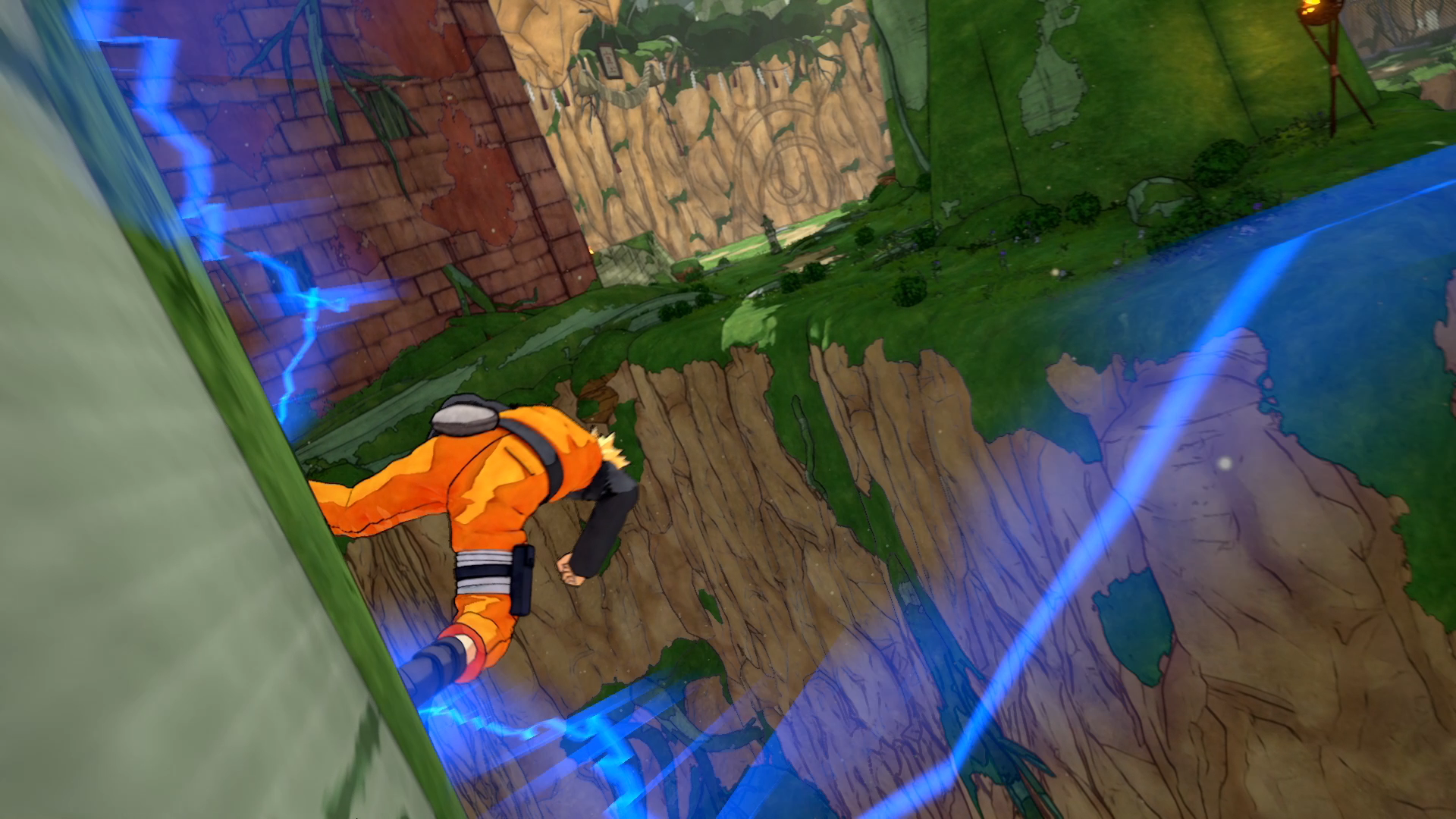 This is the first 8-player Naruto game, and it seems like it will have a scope similar to the Dragon Ball Xenoverse games. Online lobbies will act as a hub world for players as they go on missions and compete in various multiplayer modes. Bandai Namco may be trying to take a fresh approach to their Naruto games, changing up the formula a bit. It seems that Naruto fans will finally be able to work together in a full four-man ninja squad for the first time.

Getting to our demo, we had the chance to play an eight player game of Capture the Flag. Most of the rules were pretty standard, though with a few exceptions. First team to capture three flags wins, with the ability to claim a capture at any time, even if your flag is currently away. Capturing the flag takes time, so teammates have to help to keep the enemy off an ally. Maps are fairly large in size, and luckily, players have access to a couple abilities to help traverse the environment. One of the abilities is the chakra jump, which allows large leaps to cover distances or heights by using the right trigger. Then there is the ability to wall run, which works seamlessly to move up cliffs or catch yourself from a fall.

These abilities combine with some combat that will feel familiar to Ninja Storm fans, albeit a bit more simplified. Players will have access to basic combos as well as their ninja tools and unique ninjutsu. Ninja tools range from kunai knives for ranged attacks to substitutions for evasion. Each iconic character from the franchise will use their signature jutsu like Naruto’s Rasengan or Sasuke’s Kirin. Custom characters can have their own jutsu as well based on their class and affiliation. 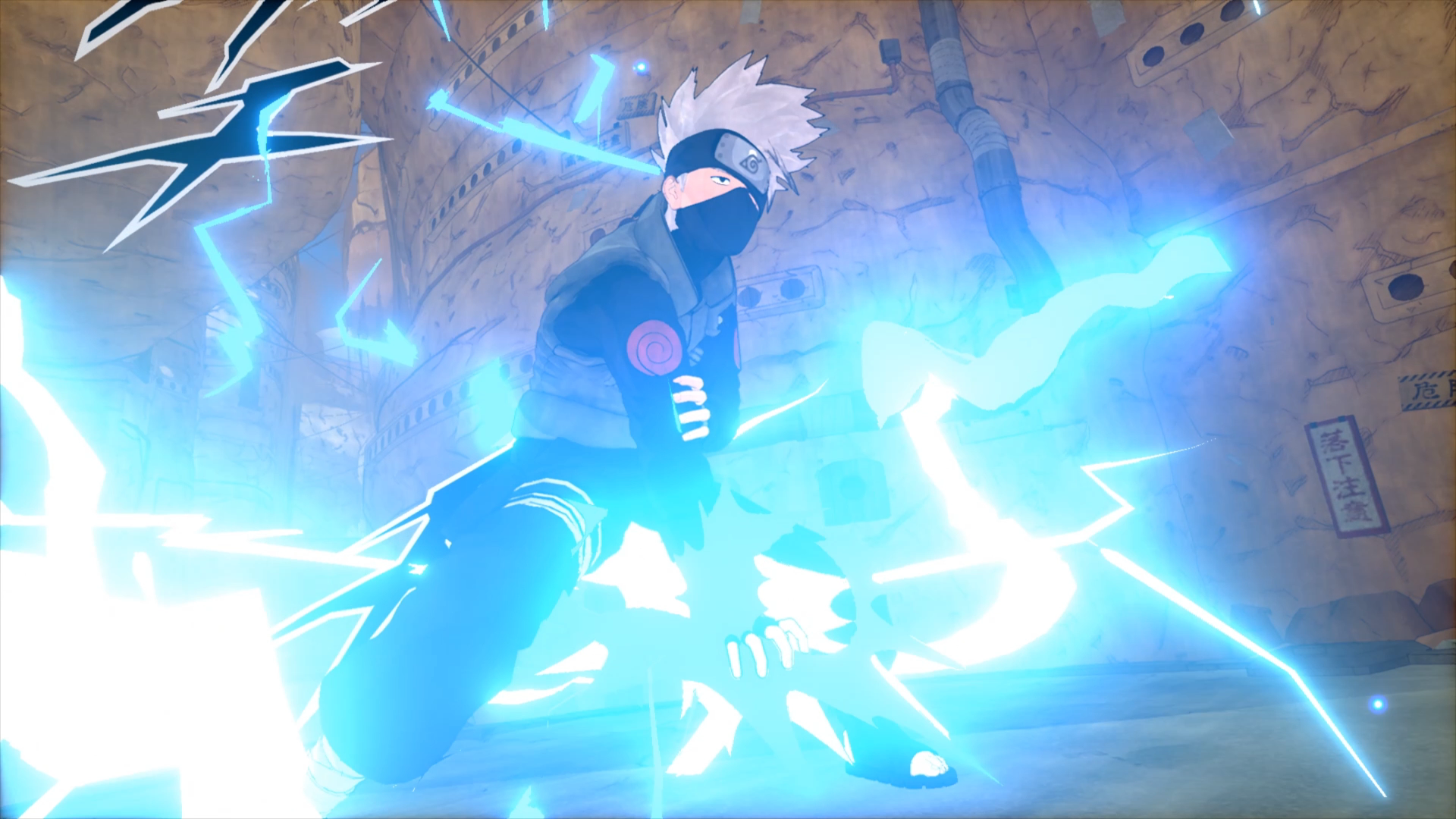 Fighting the opposing team could be dependent on the class type of both players. A ranged fighter wouldn’t have much of an advantage  against an attack fighter. Defense fighters would be a challenge as well to take down given the amount of health they have. Players have to work together to take advantage of their unique skillset to get the best results. Fighting on walls is also unusually satisfying, though bottomless pits are a bit of a pain.

With Capture the Flag being the only mode we could try, we just barely scratched the surface of the game. Either way, Naruto to Boruto: Shinobi Striker feels great and looks like it will scratch that Naruto itch for fans. Shinobi Striker will release for the PlayStation 4, Xbox One, and PC sometime in 2018. We’ll likely have more information in the coming months as Bandai Namco makes new announcements. 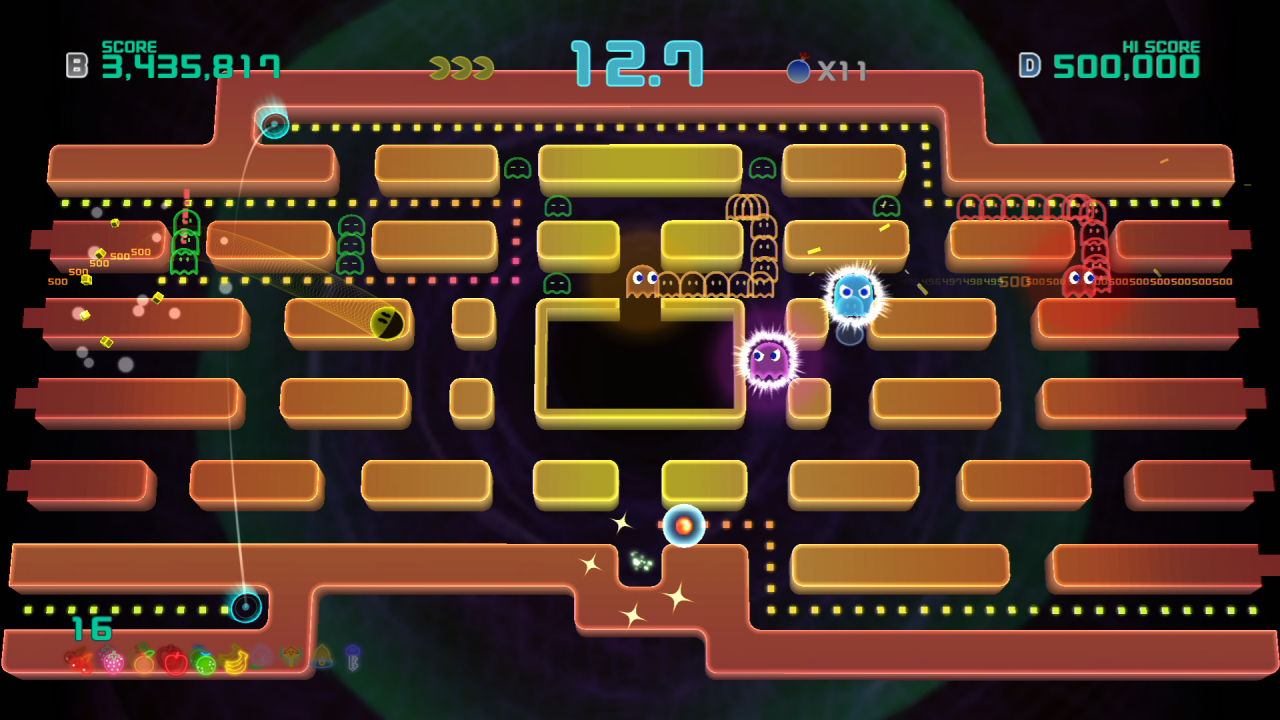 I’ll admit, I haven’t played much of Pac-Man Championship Edition, despite it being a great update to a classic game. The sequel came out in 2016 to receive high praise from critics and fans alike. Now, the game is coming to the Switch, but with a unique and fun twist: co-op mode.

Pac-Man Championship Edition 2 Plus is all the crazy visuals and fast thinking that the originals were, looking right at home on the Switch. The added co-op mode adds a really interesting element though. Having one Pac-Man on screen is usually crazy enough, but adding a second one enhances that experience. You’ll never look at your co-op buddy again without seeing an awesome Pac-Man partner.

Stages look similar to older Pac-Man titles with the exception of sleeping ghosts and occasional jump pads. As players collect pellets, they’ll pass by these ghosts as they wake up and immediately take chase on one of the targets. As the ghosts continue to wake up, they start to form a chain behind one of the players. When small, it’s more or less a dazzling display of rainbow effects. When it gets larger, it starts to feel like the game Snake, where the longer the chain, the more dangerous things are. 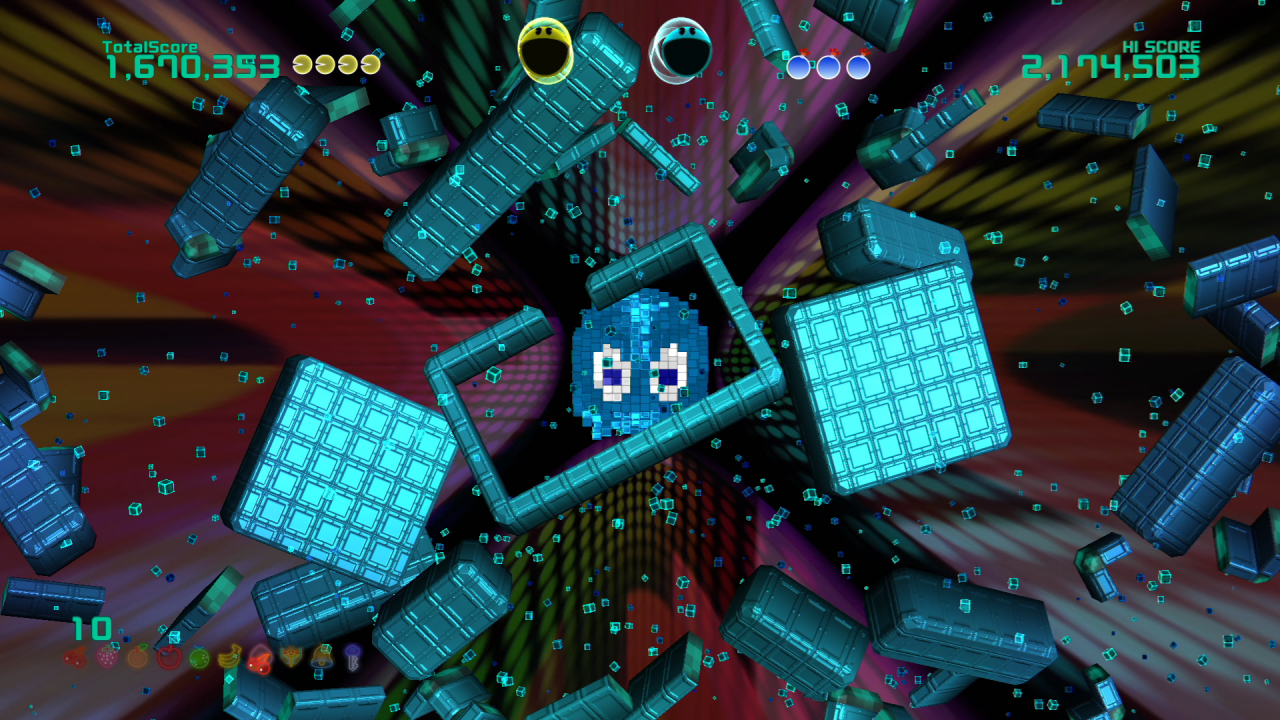 Only one player is being followed by the chain, leaving it up to the other player to help pick up the slack. They can even continue to wake up remaining ghosts while they collect pellets. Despite the sleeping ghosts, there is at least one ghost that is active on the field and has his own agenda. He will be the main threat here as he can follow either player and make life a problem. When a player is caught by a ghost, their partner has a chance to save them by ramming into the ghost with a bomb.

After all the pellets are collected, a bubble with fruit will appear in front of both of them players. They’ll then have to group up and pop the bubbles together, acting as a sort of “high-five” for a job well done. It’s incredibly satisfying to do and it makes both players feel pumped up for the next stage. It’s also satisfying to make the ghost chain vulnerable, allowing both players to eat it from both sides. Getting to the boss and fighting as a team might not pose much challenge, but it’s definitely still a good time. 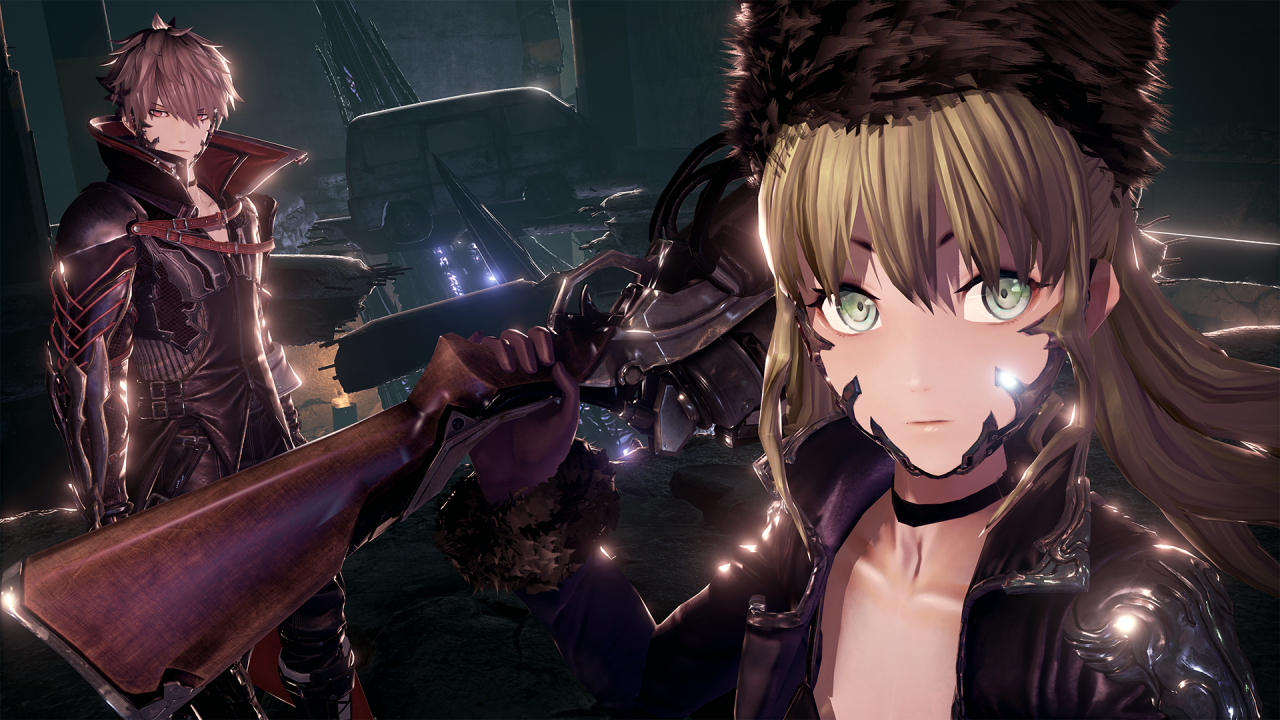 Even though we didn’t get to play Code Vein, we did watch other members of the press demo the game. We were also given some personal insight from one of the brand managers. Code Vein is a post-apocalyptic title from the developers of the God Eater series. Humanity has formed a resistance using power gained from sacrificing memories and giving into bloodlust. If they give into their thirst for blood fully, they risk becoming one of the Lost, fiendish creatures devoid of all humanity. The Lost have grown to outnumber humans and it’s up to Revenants of Vein to take them down.

Players will create their own character and choose their own battle style associated to different weapons. They will also get to pick a partner character, who will help them out in the field. Bandai Namco felt that they wanted a game that was challenging like Dark Souls, but also a bit less tense. Giving players a partner character to fight alongside them helps, but it also means someone to protect as well. If a player falls in battle, their partner can revive them. The same goes for their partner falling, giving the player a limited amount of time to save them. 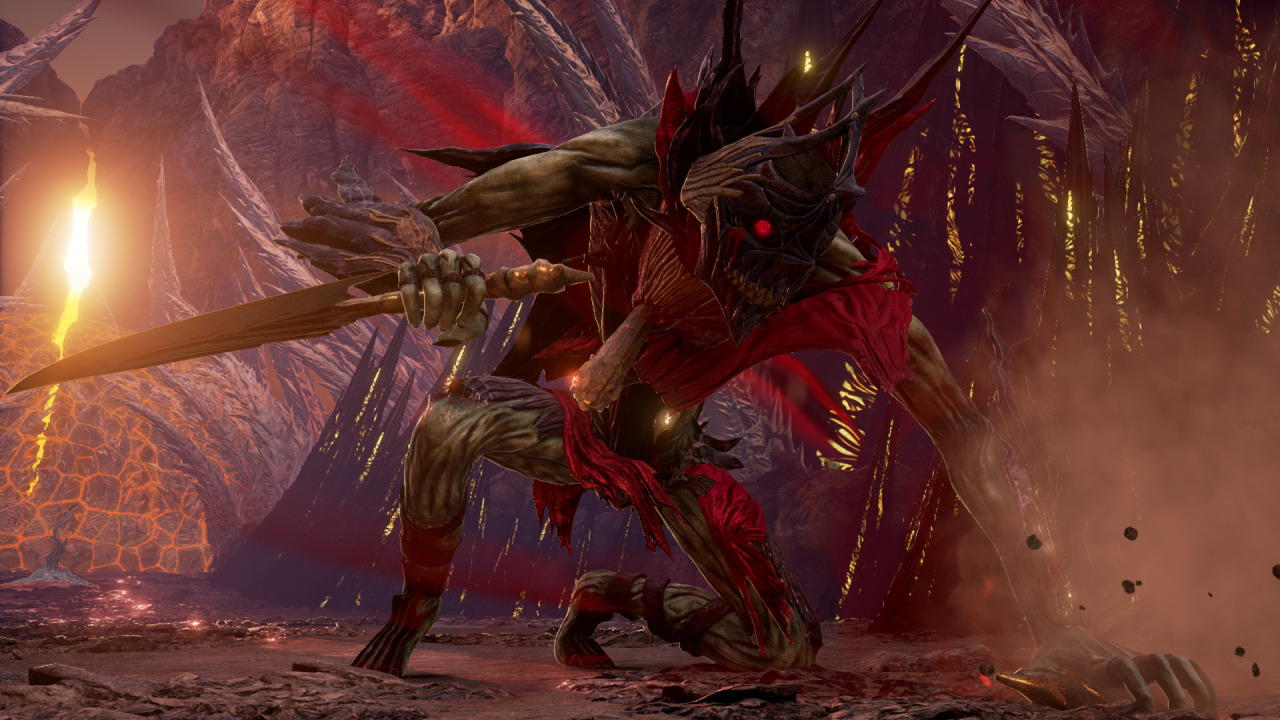 Environments are truly breathtaking in a dark and dreary Gothic style. The characters having an anime aesthetic makes for a stark contrast, but it looks great in motion. It feels almost like a CGI anime movie come to life. The designs of the Lost are also pretty unique and fitting for the visual style. Since blood is a huge part of the plot, the color red always makes a clear focal point. This is even true in areas that are almost devoid of the color.

Players will use blood as part of the gameplay too, as they will use Blood Veils to drain their enemies and enhance their skills. Having access to various “Gifts”, players can use powerful attacks and over the top weapon combos. Players will also be able to customize their own skill tree and use that to further form their own play style. Doing a mission from start to finish will allow a player to carry their powered up abilities to the boss. This encourages players to keep themselves alive throughout the mission to reward themselves with full strength in the end.

While most enemies on their own may not be a huge challenge, fighting a group of them can be extremely deadly. It will take working with your partner and using Blood Veils to truly take down the toughest foes. When asked about multiplayer, Bandai Namco was unable to comment. It’s entirely possible that a two-player co-op mode will be added to the game given the huge opportunity. The game seems perfect for co-op, though it may also take away from the challenge. Either way, for now, Code Vein is classified as a single-player experience. 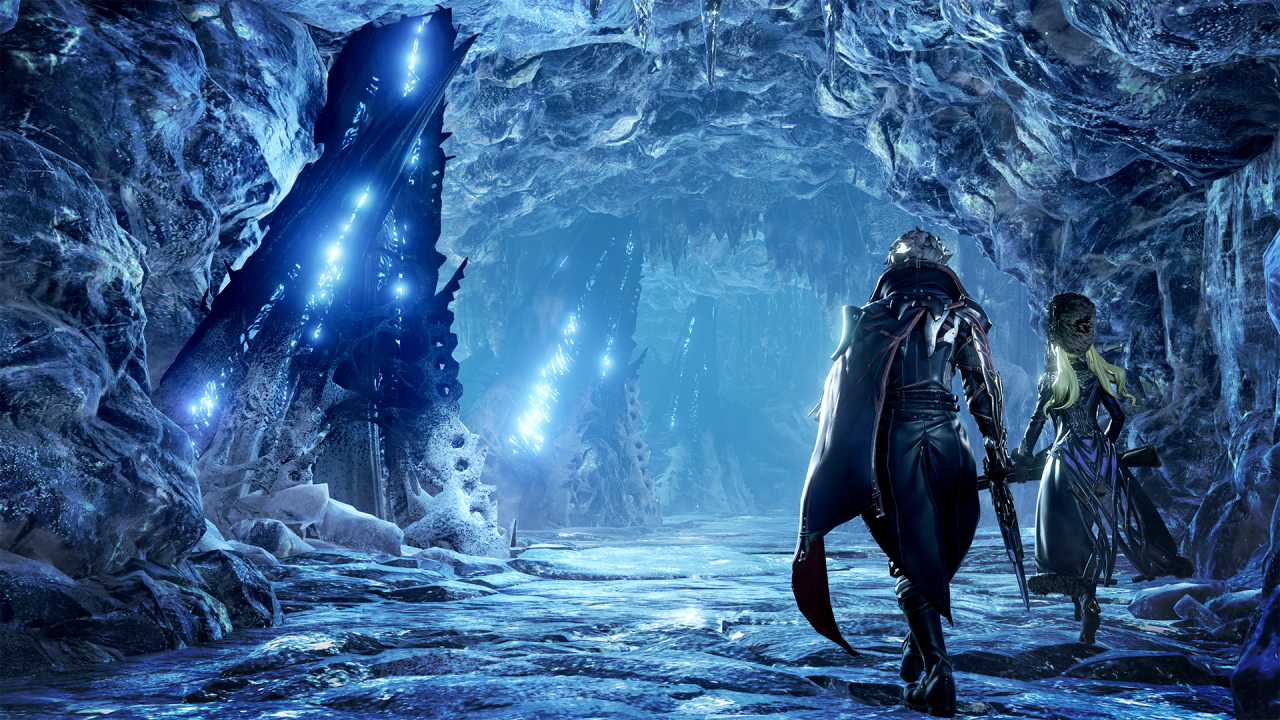 It’s unfortunate that we weren’t able to play it, but we can’t help but hope to see more. Seems Code Vein will be a promising new IP from Bandai Namco and fans of God Eater may have a lot to be excited about. Code Vein is expected to release sometime this year for PlayStation 4, Xbox One and PC. We look forward to hearing more from Bandai Namco on this title.

That’s it for our preview coverage from the Bandai Namco event. We’re thankful to Bandai Namco for allowing us to drop by and give their games a try. We’ll have more news and updates on these games as they release, so stay tuned to GotGame for more!