Bandai Namco was kind enough to invite GotGame and other press to a preview event in San Francisco to cover some of their 2018 games lineup. While we didn’t get a chance to play all of the games at the event, we played most of them and got some nice hands-on impressions. We’re going to split the preview into two parts, so today will be Soulcalibur VI, Tekken 7’s Noctis DLC, and New Gundam Breaker. 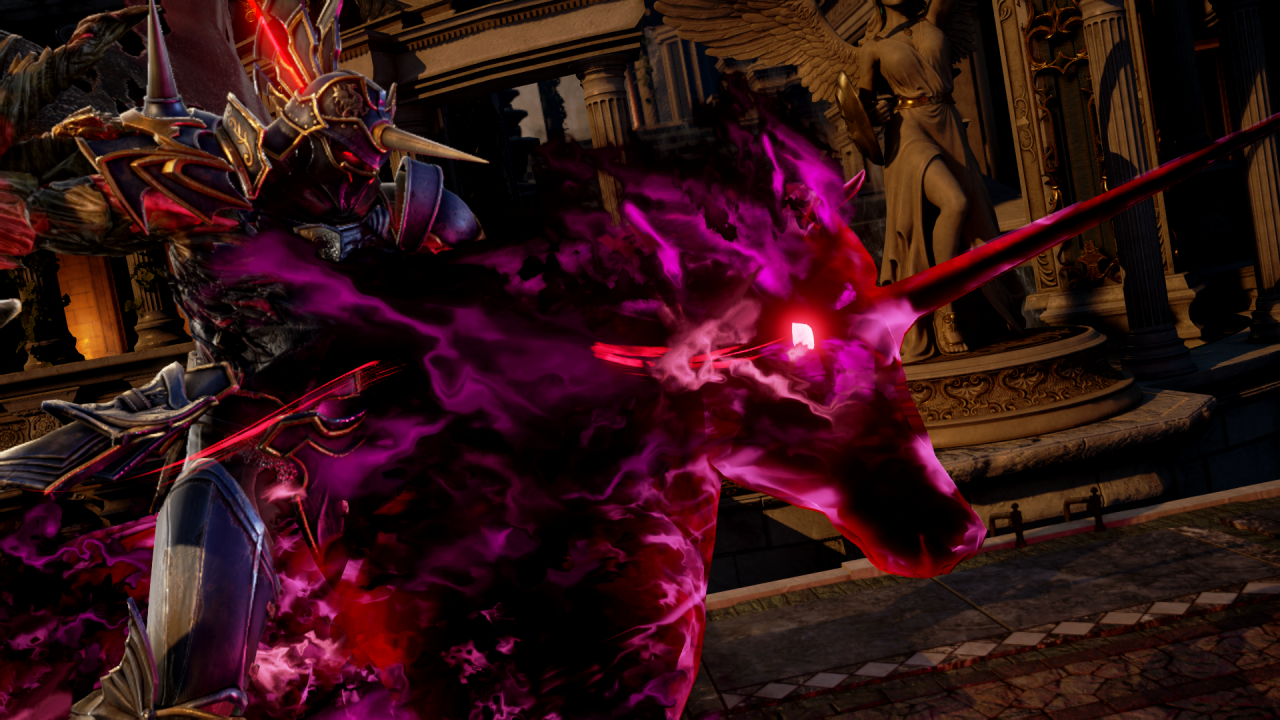 Getting things started is Soulcalibur VI, the highly anticipated sequel to the iconic weapon-based fighting series. It’s been six years since we last saw a Soulcalibur title, and fans have waited patiently to see a new installment. The demo at the event had six characters to pick out of what seems like twenty starting characters. Mitsurugi and Sophitia, who were revealed in the announcement trailer, as well as returning characters Xianghua, Kilik, and Nightmare. A new fighter was also introduced with the character Groh, a mysterious “agent in black” with a dual-sided blade.

The combat in Soulcalibur VI seems noticeably faster than what fans may be used to, but it looks fantastic in motion. Plenty of sparks and effects, destructible clothing and environments, and solid animation. Only one stage was in the demo, the Shrine of Eurydice: Cloud Sanctuary, a detailed stage from the announcement trailer that features a day/night cycle. The game is truly a feast for the eyes and seems to take advantage of the more powerful hardware. All the characters announced so far feel unique and have their own weapon of choice, including Kilik who is no longer a weapons master like he was in Soulcalibur V. 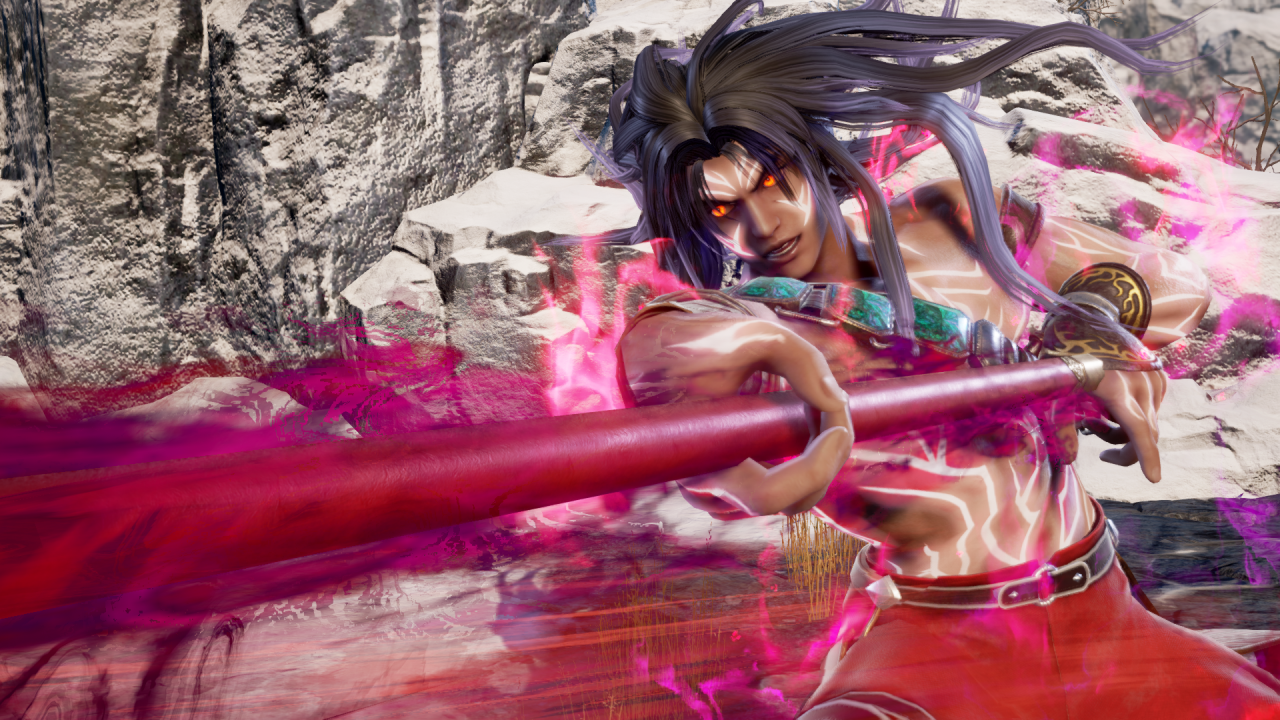 Most of the returning characters will feel pretty familiar, albeit with some changes to their moves. Kilik for some reason has a Soul Charge that boosts his strength at the cost of draining his health. It makes him look almost identical to Necalli from Street Fighter V after his V Trigger. Knowing how Akuma is in Tekken 7, I wouldn’t put it past Capcom and Bandai Namco to somehow link the characters. Nightmare has a really cool demon horse during his Critical Edge and seems to lose some of his stances, but with the increased speed, he can still move very quickly.

Groh felt like an interesting inclusion, using his dual-sided that can separate and perform some devastating combos. He was pretty fun to play as and he felt like a unique addition to the roster. Xianghua and Sophitia felt very similar to previous incarnations and Mitsurugi, while still feeling similar, seems to have different attack patterns. New to the game is the Reversal Edge, which is a counter move that acts like Rock, Paper, Scissors. Time will slow down and both players will be given a chance to perform a move with an advantage and a weakness. Like Rock, Paper, Scissors, the event can either end with one player as the winner, or both players ending in a tie. It works surprisingly well and doesn’t take any effort to pull off, making the game feel just a bit more fresh. 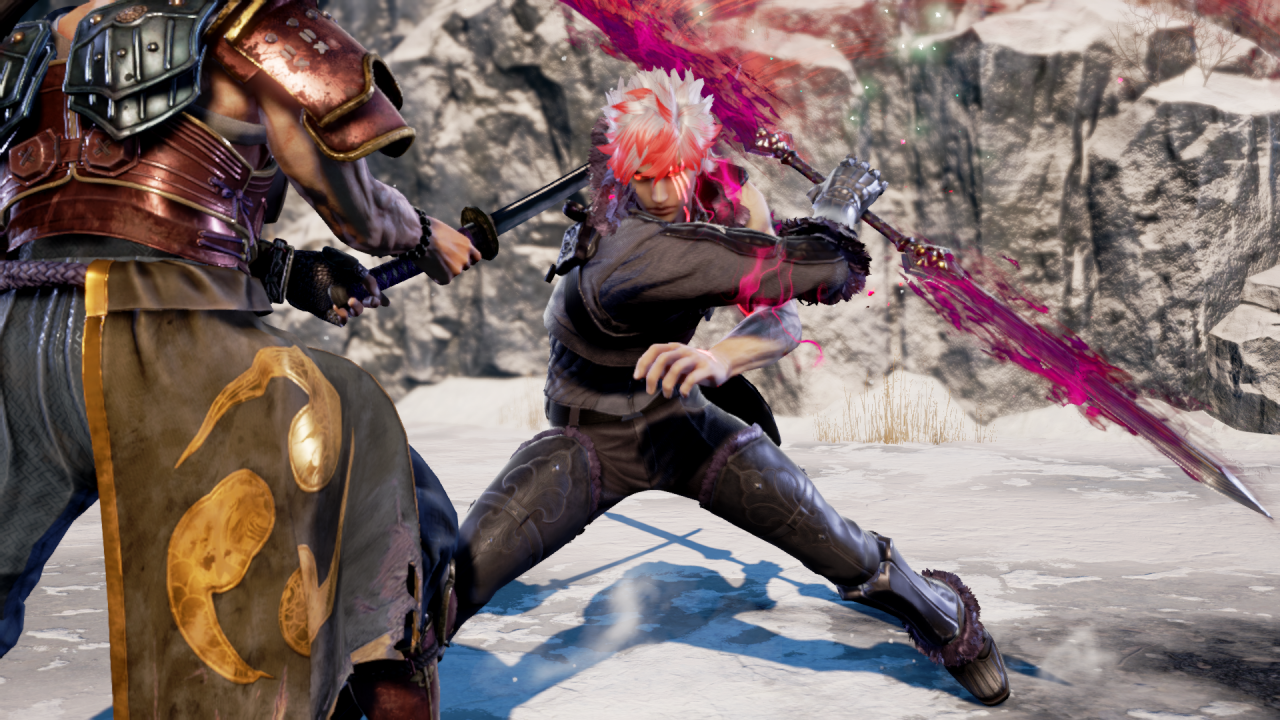 Since the game is celebrating the 20th anniversary of the series, it can be expected to get more surprises. There will likely be a guest character, though it’s too early to say if there will be exclusive characters between platforms. The last entry had Ezio Auditore da Firenze from the Assassin’s Creed series. Tekken 7 added Geese Howard from Fatal Fury and will soon add Noctis Lucis Caelum from Final Fantasy XV. Some recent notable options would be Aloy from Horizon: Zero Dawn, William from Nioh, 2B from NieR: Automata, or Geralt from The Witcher series. Whatever they decide, it will surely be something people can look forward to.

Soulcalibur VI plays great with looks to match. It will surely be a fine addition to the series, bringing some much needed weapon-based fighting to this generation. With an expected 2018 release, we’ll be sure to get more news soon as Bandai Namco announces it. Soulcalibur VI will release on PlayStation 4, Xbox One, and PC. 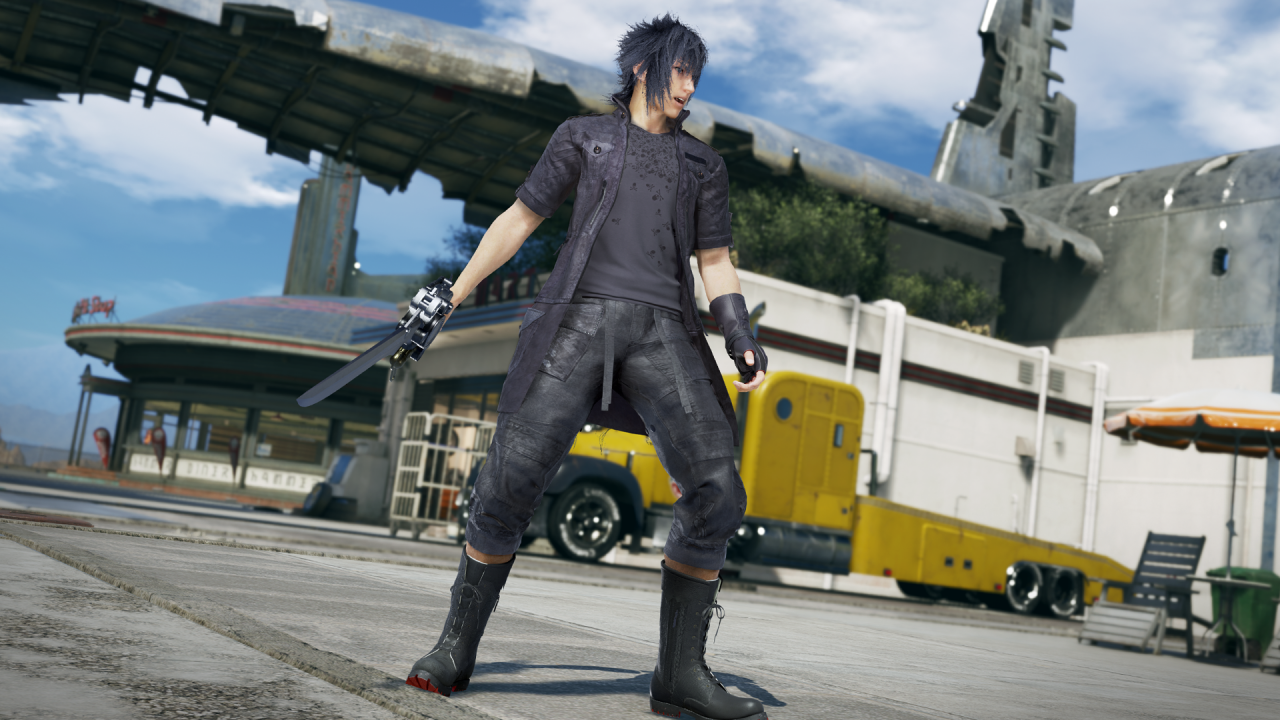 Tekken 7 has been available for about eight months now, but it’s still going strong with continued support. As mentioned above, the game already has Fatal Fury’s Geese Howard as part of the roster, on top of Akuma from the Street Fighter series. Bandai Namco decided to go way out there by including Final Fantasy XV’s Noctis. Square-Enix has been collaborating with a few companies for Final Fantasy XV, including Ubisoft with Assassin’s Creed: Origins. 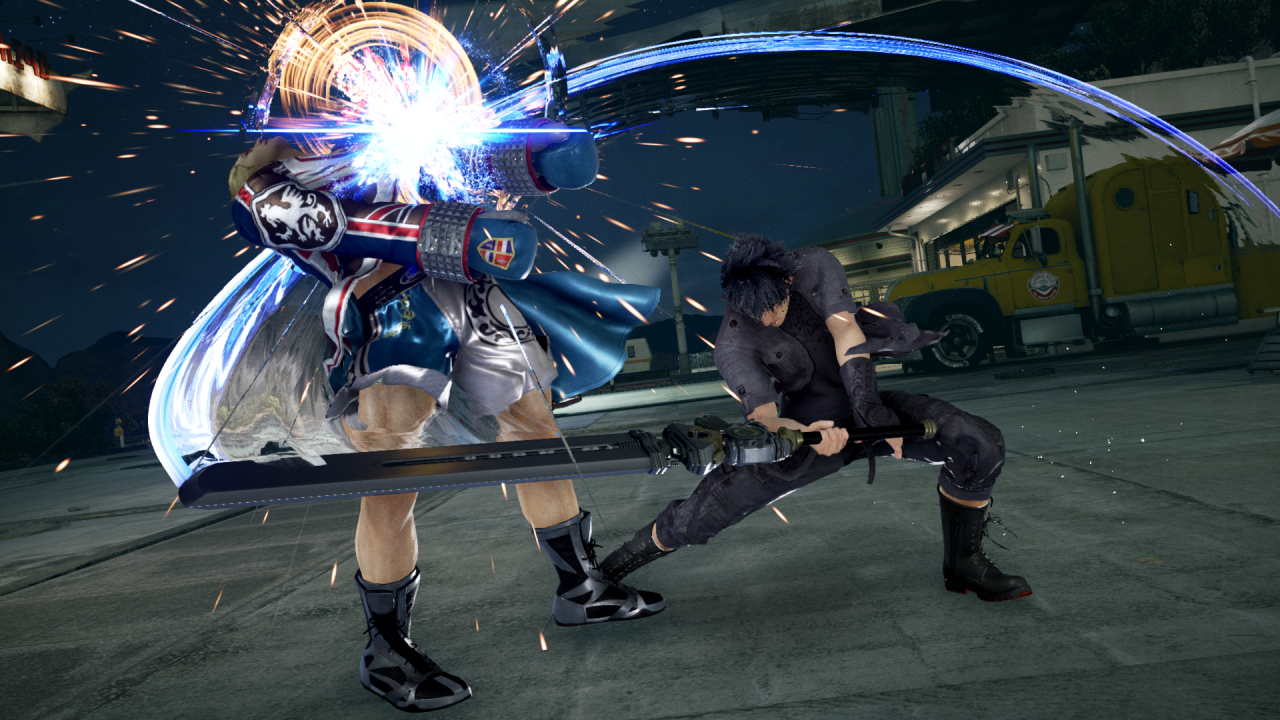 Noctis is integrated into the story of Tekken 7 through the character Lars, who apparently is friends with Noctis. To fulfill a promise, Noctis is suddenly taking on characters from the Tekken, Street Fighter and Fatal Fury universe. Unlike most characters in Tekken, Noctis has access to weapons that he materializes from thin air. This is a skill of the members from his bloodline, along with the ability to warp. His moves are pretty diverse, utilizing different weapons from swords to polearms.

Playing a couple matches, Noctis plays really well. He feels like someone that would be great for newcomers and casual fighting game fans. The Tekken veterans of the series may take the opportunity to find new and unique strategies with him. His warp allows him to close distances really quickly, attacking with piercing blows from his weapons. He uses magic in some of his attacks, like ice in his throws, or fire in his juggles. His rage art attack is fairly easy to perform, striking overhead and unleashing a devastating attack with his Royal Arms. 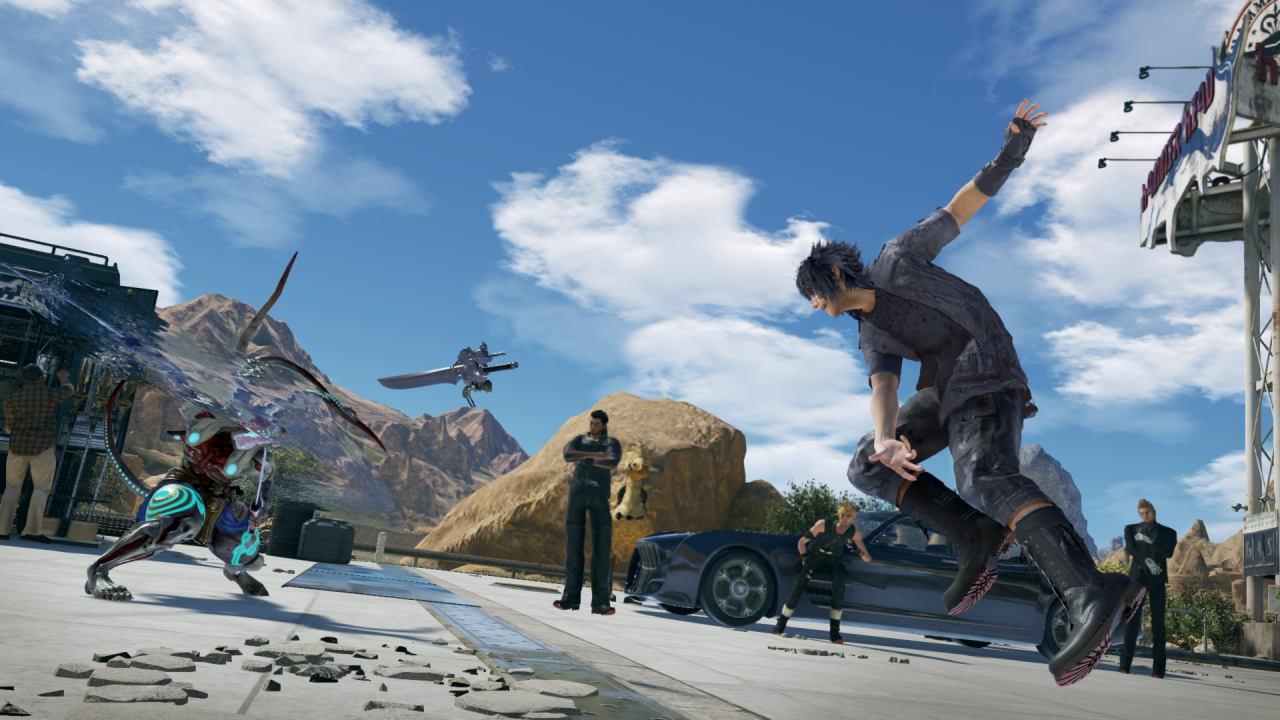 Overall, Noctis seems like a fine addition to the game, feeling like a fun guest character. Regardless of how some might feel about Final Fantasy XV, Noctis should be a welcomed asset to Tekken 7’s roster later this Spring. Tekken 7 is available now for PlayStation 4, Xbox One, and PC, and the season pass will grant access to both Geese and Noctis. 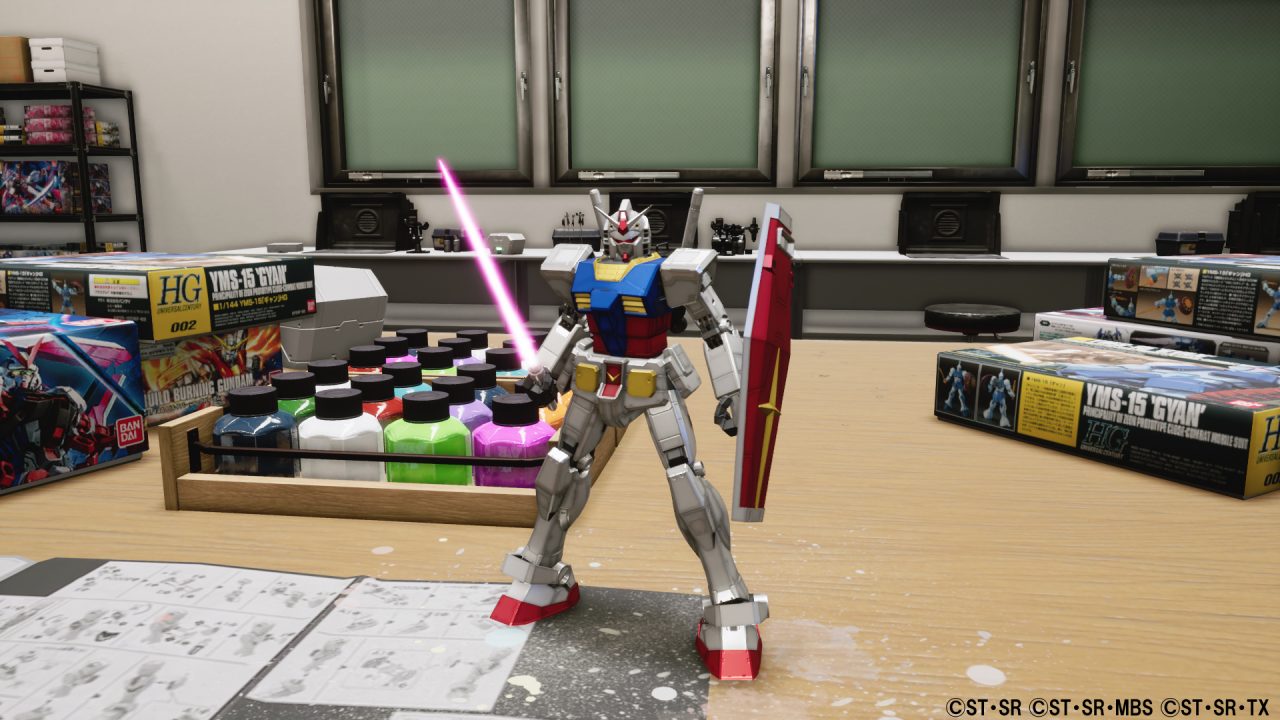 Going in blind on the demo, I jumped right into the mission. Playing as a model of Amuro Ray’s RX-78-2 from Mobile Suit Gundam, I found myself part of a four man team. The stage was a large office building, with large office equipment to get a good sense of scale. Going up against another team of model kits, we were quickly given a quest to defeat 30 opponents. Suddenly, the stage was filled with several other model kits, seemingly weaker than the enemy team. 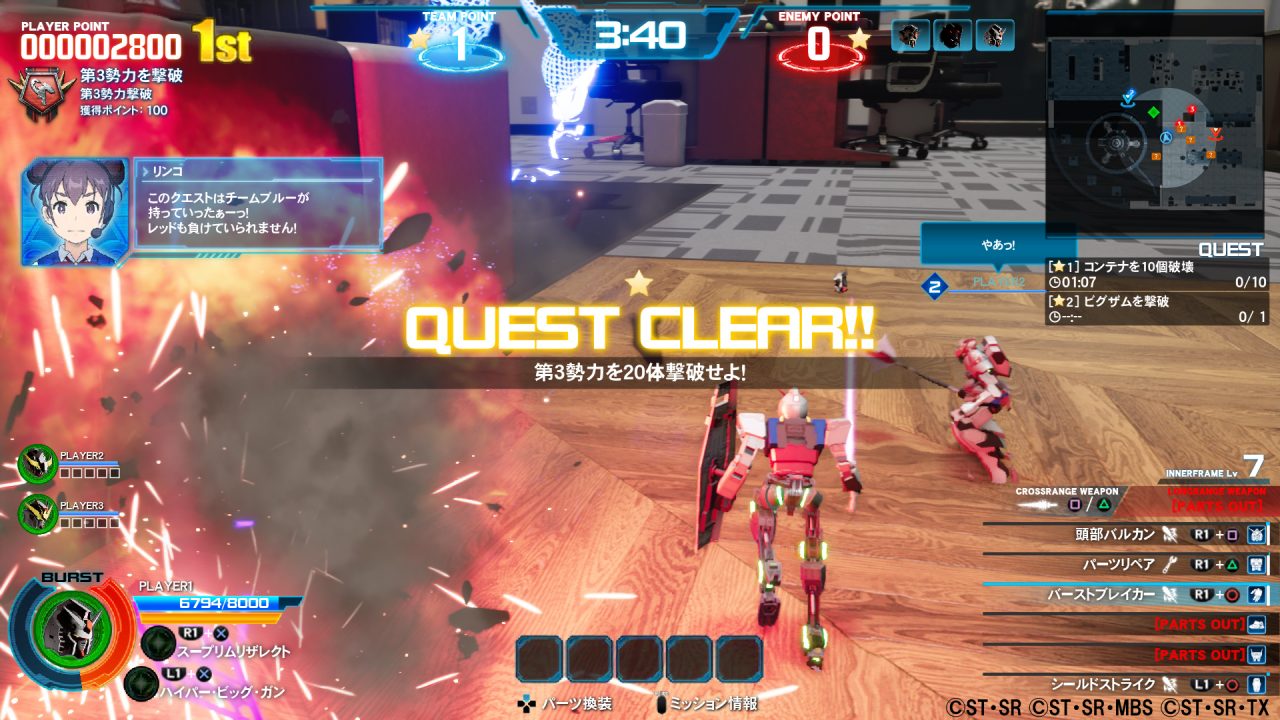 With each mobile suit defeated, a part would drop, granting access to upgrade parts for your model kit. I didn’t manage to complete the mission, but I started to get an understanding for the controls. A lot of attacks require an upgrade to perform, otherwise, you’ll be pretty limited with basic saber strikes and gunshots. As more parts get picked up, you’ll realize just how many customization options are available. Swapping parts can be done on the fly, though given the quest time limits, they may prioritize function over favoritism. It’s also worth mentioning that getting destroyed means losing a lot of those parts. Parts can at least be customized outside of battles, so that’ll make it a lot less hectic.

Running around during the missions, there was a lot of chaotic events unfolding. Probably the most notable was when MA-08 Big Zam appeared on the battlefield, causing massive destruction with heavy laser blasts. The mission was to destroy it, and though it’s a big target, it’s a very formidable one. It managed to get the best of me in my demo, though honestly, I was mostly focused on taking out the opposing team. Amidst the confusion of the missions, I didn’t realize that completing objectives was what gained points for your team. 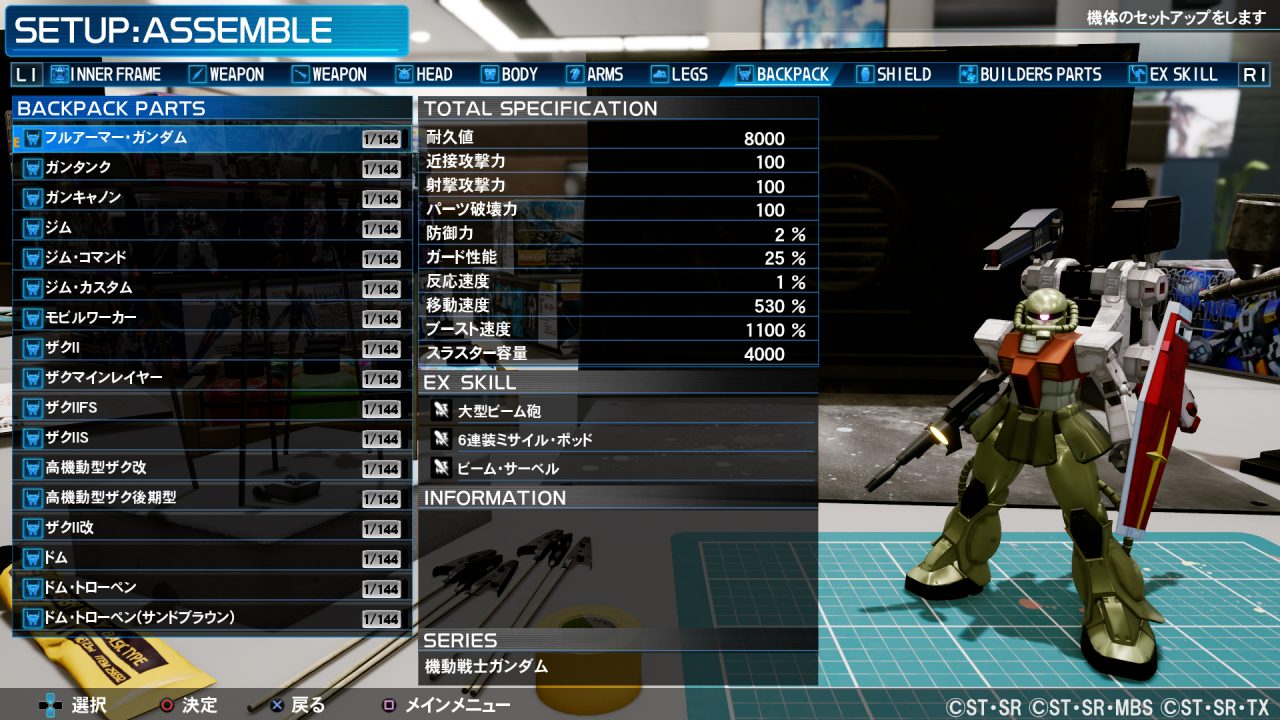 Once I realized what was going on, it became much clearer and I understood what my goals were. Unfortunately, I couldn’t manage to finish any objectives in time, and luckily, the other team couldn’t either. That ended the match in a draw, ending my demo. Walking away, I couldn’t help but wonder what it was I just played. Though it was confusing at first, I couldn’t help but be curious. I would love to sit down with New Gundam Breaker and really explore the options. It feels like a game that takes time to process every detail, and that’s not a bad thing at all.

It seems like the game is still a work in progress, but I’m sure more will be revealed in time. It’ll be cool to see what a full powered Gundam model kit can do in the game. Even then, it seems that there are more varied environments to be revealed soon too. With Eight player matches and lots of Gundam models, hopefully we’ll see more of the game soon. Bandai Namco’s New Gundam Breaker is set to release exclusively for the PlayStation 4 sometime this year.

We’ll be posting more coverage from the event next week. Some of the games include Naruto to Boruto: Shinobi Striker and Pac-Man Championship Edition 2 Plus. Until then, feel free to post in the comments what Bandai Namco game you’re looking forward to in 2018.