Dragon Ball fans have always had a large stable of games to play, with new games consistently releasing over the years. They’ll always have their favorites; Budokai 3, Budokai Tenkaichi 3, and more recently, Xenoverse, come to mind. Every so often, Bandai Namco finds a new way to put a spark back into the franchise. Working together with Guilty Gear and Blazblue developer Arc System Works, a new favorite may have just been born in Dragon Ball FighterZ.

Moving away from the 3D fighting genre, Arc System Works has used their expertise to craft an accessible 2D fighter. Similar to classics like Marvel vs. Capcom 2, Dragon Ball FighterZ is a 3-on-3 fighter with fast-paced action. What sets it apart from other fighters is the accessibility the combat has for newcomers, while still maintaining advanced techniques for pros. FighterZ also uses the same style as Guilty Gear Xrd with 3D models and cel-shading in place of 2D sprites. The animation style is also bold and expressive, making a very faithful representation of the Dragon Ball anime series. For players with Xbox One X, PS4 Pro or a powerful gaming PC, 4K is also supported. 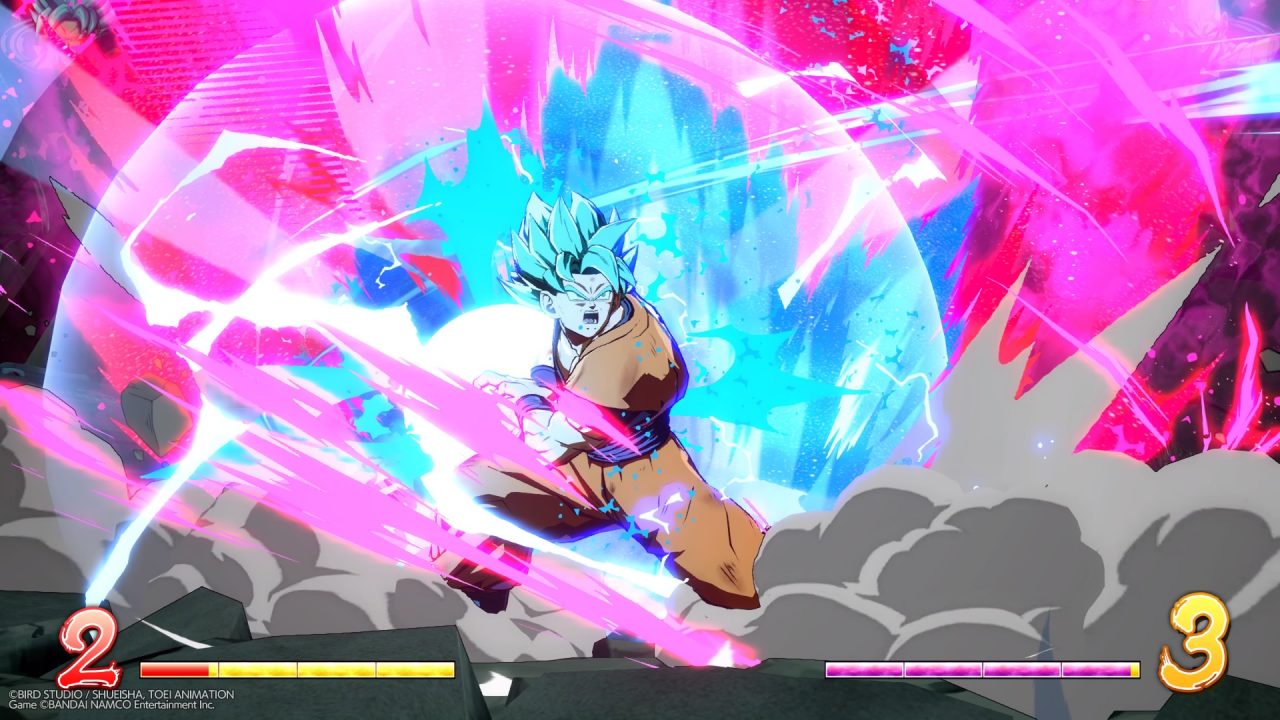 Combat in the game is easy to learn, but a bit more difficult to master. There are plenty of auto-combos for new players, and extended combos for more advanced players. Characters will all have the same controls, but will perform different actions based on their own unique skill set. Everyone will have a light, medium and heavy attack, as well as ki blasts, dragon rush, and assists. Auto-combos involve pressing the same button in sequence while extended combos can be a bit more complex but more devastating. The action moves fast enough for diehard fighting fans and has enough style to attract a more casual crowd.

The presentation overall is lovingly created with charm, fan service, and skill that can only be done by a talented team. Character models are accurate to their anime appearances right down to a single frame. Special attacks look as stylish and glorious as fans could hope for, which is a treat. There are even a few Easter eggs for players that do special attacks under certain conditions. The soundtrack is energetic and fitting for a fighting game, creating the perfect mood for battles. This stellar presentation truly shines in the game’s story mode, which develops over three alternate scenarios.. 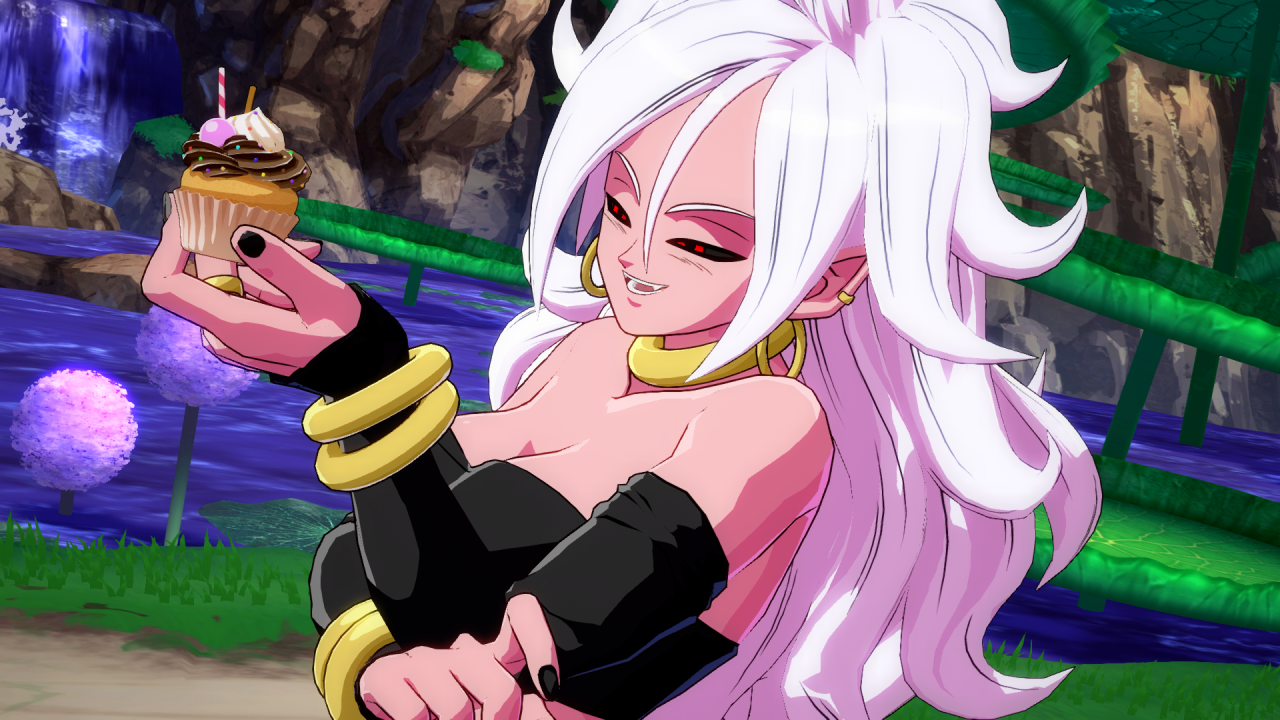 Telling a brand new story, Dragon Ball FighterZ introduces Android 21, a character with a bit of a complicated history. Without spoilers, the storyline has a strong focus on her, but also focuses on the player as well. FighterZ has a very “video game” style narrative, as the concept of “linking” is introduced. Mysterious waves have drained all the fighters of their strength, and only by linking can they regain it. The player represents the soul used in this link, bonding with the fighters as they build up their strength. Players will battle armies of clones of popular fighters to earn experience and level up. Many characters of the series are also brought back to life by the Dragon Balls, mostly on the villain side.

It’s the fallen foes that actually add a bit of fun to the game. There are some great interactions with characters they would normally never have met. Nappa for example, dies pretty early on in the series, and though his strength is less relevant, his personality gets to shine among the likes of Cell or the Ginyu Force. Some characters have old grudges that never faded and others even get to have a nice little reunion. Taking place over three arcs, each arc represents a different take on the story. Rather than using the same story from a different perspective, each arc tells a different, yet similar story. Each story essentially adds more information to the overall puzzle, revealing more answers. While each arc doesn’t connect entirely, it feels very similar to the Dragon Ball series and how the movies work off a separate but similar timeline. 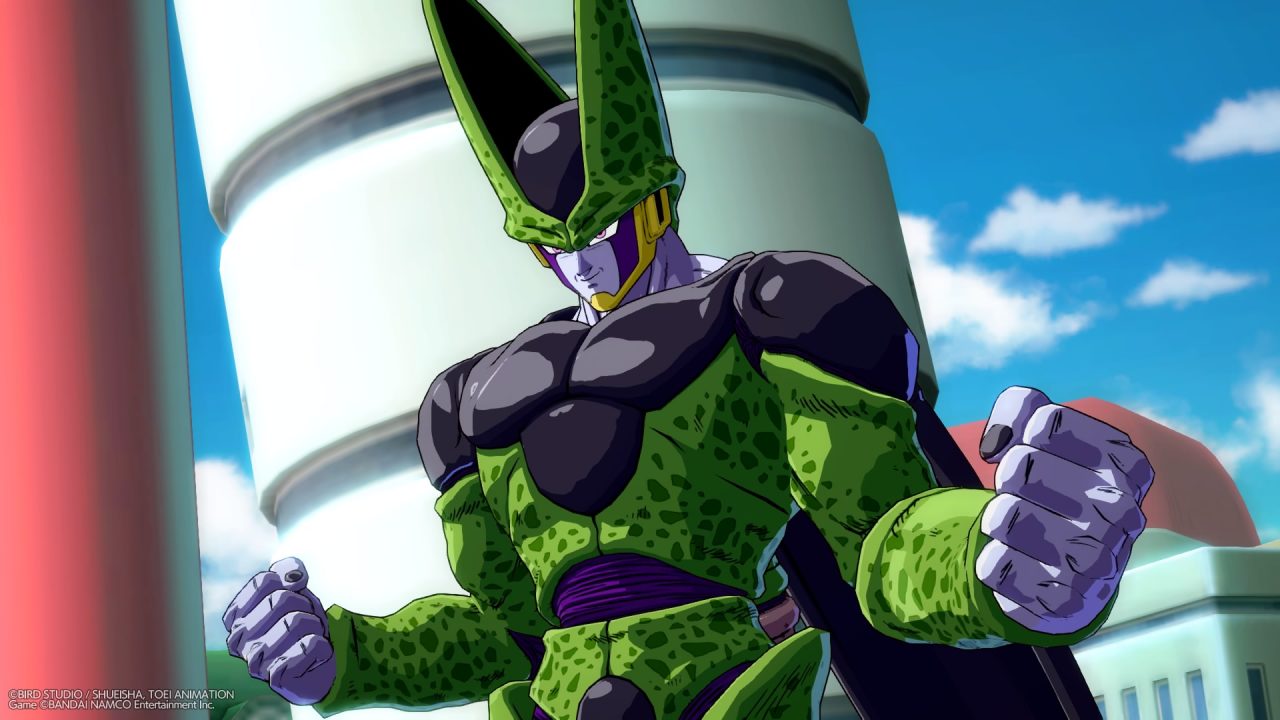 While the presentation of the plot is done well with fun cutscenes and great voice work (in both English and Japanese), there is a drawback. The length of the story is pretty hefty, averaging 10-20 hours, possibly more if players go for 100%. While the story events are all in good fun, the repetitive nature of defeating clones to can be a chore. It makes things a bit worse when the opponents rarely fight back, making it all the more tedious. Normally, it wouldn’t be such an issue, but considering the one new character is locked behind finishing the story, it’s almost vital. It’s a good thing the story has a lot of great moments, otherwise, it might’ve not have been worth playing.

Another aspect of the presentation is the lobby system, which is a pretty big part of the game. As players start the game for the first time, they’ll be placed in a 64 player lobby. It’s in this lobby that they are able to access modes like the story, practice, and even arcade mode. It’s also where all the multiplayer aspects lie, with an abundance of online modes that players can access. World Match is where players can do their ranked and casual play. Arena Match allows casual matches that can be spectated in the middle of the lobby. Ring Match is where players can set up their own private lobbies, setting their own rules for the match. Then there’s Tournament mode in Local Battle, allowing players to make their own tournaments. Players will navigate the lobby in the form of a cute Dragon Ball character avatar, adding a bit of personality. 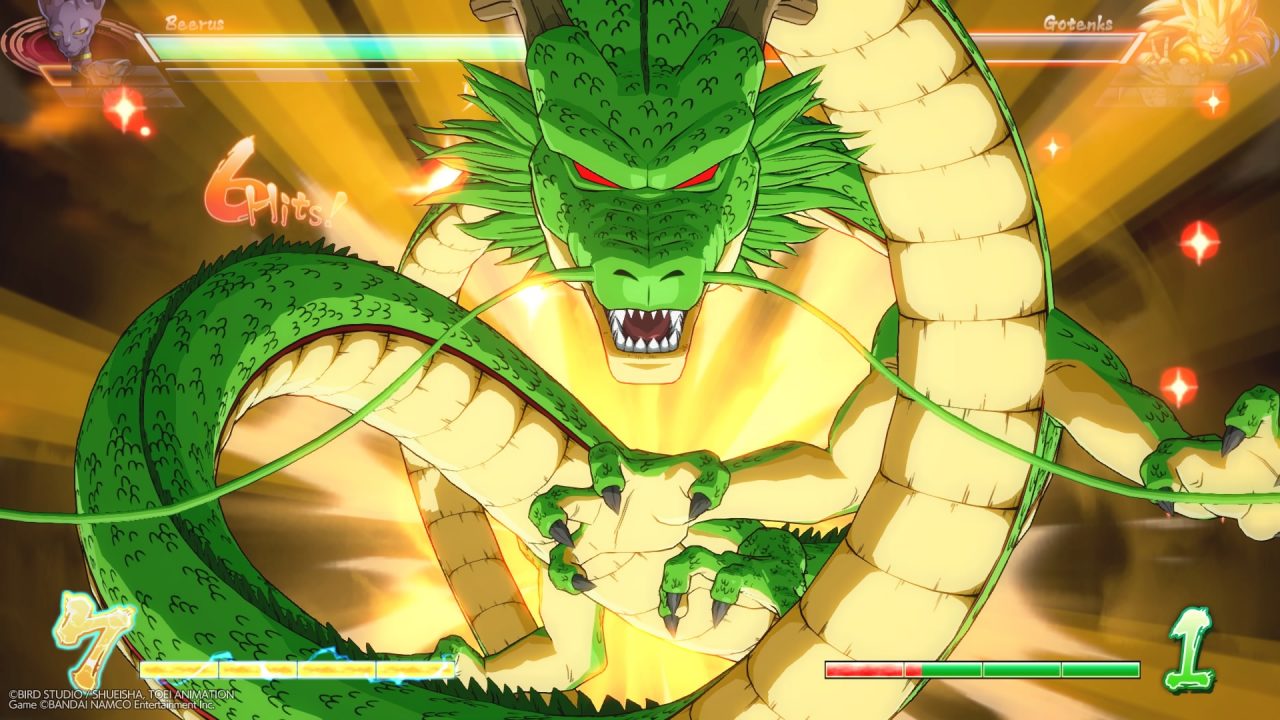 While the lobby system is a good idea on paper, it does bring forth some issues. First of all, if a player wants to play a specific multiplayer mode, they have to first find a populated lobby. There are lobbies that are specialized in each mode, but since they have access to all the other features as well, it’s possible to get a lobby where nobody is playing that mode. Arena Match for example, has several lobbies, but it’s entirely possible to go into a full lobby and find nobody in the arena to fight. It then makes more work for the player to use their best guess and find a new lobby. On top of that, there are some issues with staying connected to a lobby, though Bandai Namco is aware and they are focused on fixing these issues.

The lobby setup also adds another notable issue, and that’s the fact that players may not find all the features. The fact a lobby is required to get anywhere in the game implies having to be online. However, there is an offline lobby, though it is well hidden while searching for  normal lobbies. Since the game automatically joins an online lobby upon startup, it’s pretty easy for players to miss. While these issues don’t make the game bad by any means, it does make one wonder if a normal matchmaking setup would’ve been better. Overall, the lobby is a fun idea, and it works once players get a full understanding of all their options. 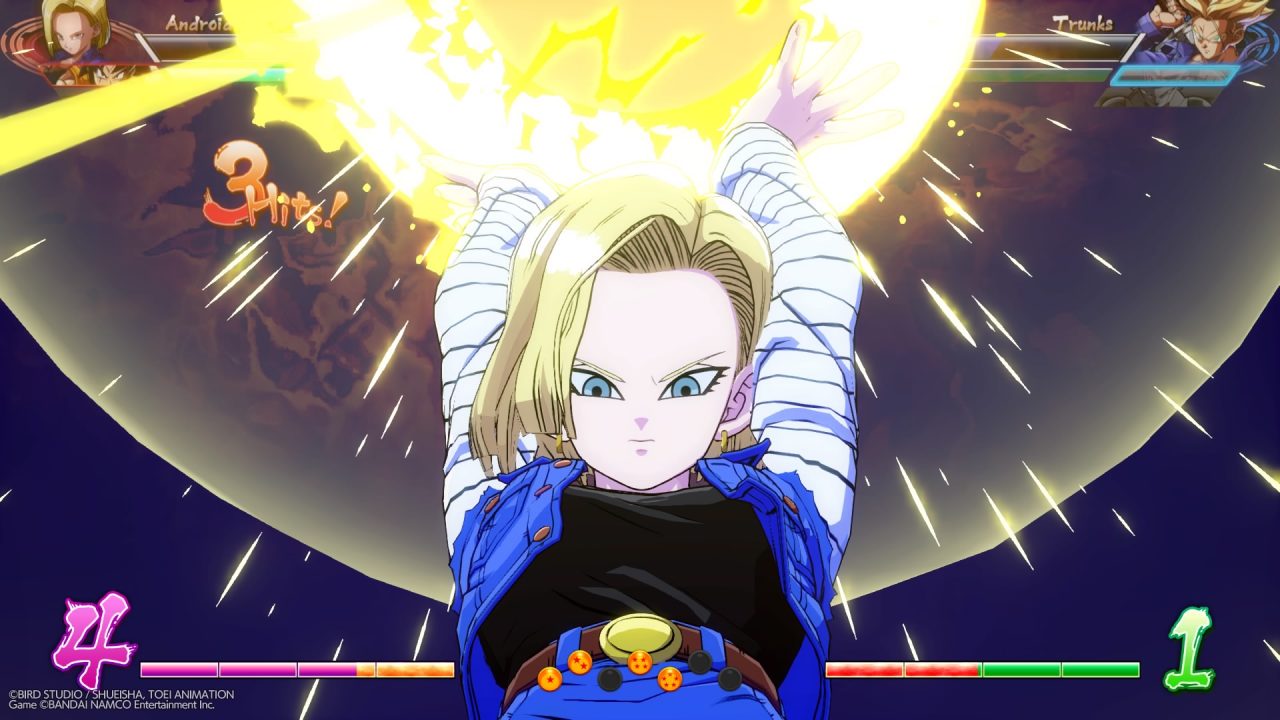 Online multiplayer has been nothing but stable, even with players with low connections. Arc System Works has done a great job with the netcode for this game. While there are some experiencing matchmaking issues depending on their platform, there haven’t been any issues during our review. Even so, when in an actual match, the game runs stupendously, and that itself is a triumph. In a genre where gameplay stability is important, Dragon Ball FighterZ gets it right.

FighterZ has a lot of shining moments, and while there are some minor issues, the gameplay and overall presentation easily make up for it. With a current roster of 24 characters, there is room to grow, but there are at least eight more characters on the way. It’s hard to say if Bandai Namco will have long-term support for the game, but one could hope. It would be great to see more anime fighters in this style, as FighterZ truly brings the anime to life. We’ll likely be seeing Dragon Ball FighterZ in tournaments for years to come, so hopefully it maintains those legs.