Very rarely does a mobile game capture my attention, but every now and then, a true gem shines. Capcom recently revived their Puzzle Fighter series for mobile phones, the original releasing over 20 years ago. Bringing together characters from several of their franchises, Puzzle Fighter is as much a Capcom celebration as it is a puzzle game. Making slight changes to the mechanics, Capcom has evolved the gameplay to be more suited to the mobile platform, and it works. 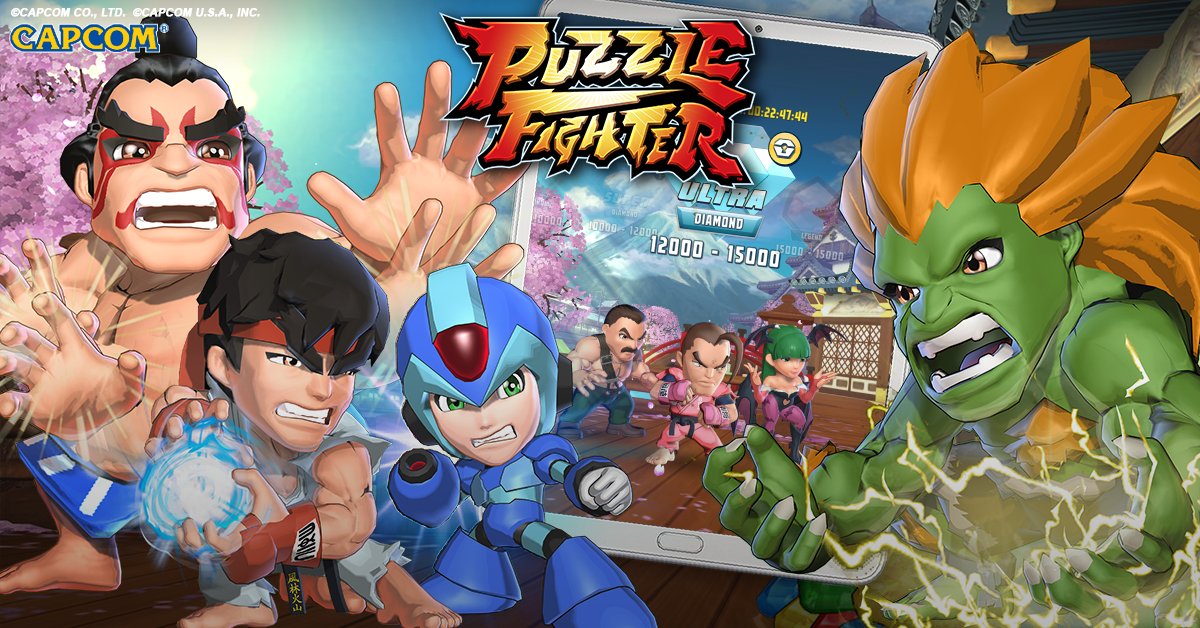 From the start, Puzzle Fighter isn’t your typical puzzle game. Combining fighting game mechanics and color matching, Puzzle Fighter perfectly blends the two genres in a fun and exciting way. Gems of four different colors will drop into the play area and crash orbs can be used to destroy gems of the same color. Stacking gems into larger groups turn them into power gems, which deal more damage and can even activate a skill. Diamonds can mix things up by eliminating all of whichever color it lands on, which can help in a pinch. Lastly, timer gems are gems that are dropped by your opponent in a specific pattern. Timer gems count down and become a regular gem when they hit zero, which can become a blessing or a curse. Using these gems strategically is key to victory against your opponent, and a player won’t become a pro overnight.

What makes these mechanics work so well is the fighting game structure. Players will unlock characters to use in battle, each with their own skills, color affinities, and drop patterns. Eventually, players can unlock up to two support characters to help add to their team as well. Characters will have a health bar, which will take damage as the opponent destroys gems. Most damage will come from an activated skill or when the gems overstack. Depleting the health bar of the opponent claims victory, and it takes a lot of skill and practice to do it effectively.

The gameplay is addictive and matches can definitely get intense. A lot of matches will narrow down to the infamous “magic pixel” (last pixel of health) and a comeback can happen almost instantly. A lot of this works so well because the game has a great cast of iconic Capcom characters. So far, there are currently 16 characters, four of each color affinity. This includes characters like Ryu from Street Fighter, Morrigan from Darkstalkers, and even X from Mega Man, with more on the way. These colorful characters bring a lot of charm, and though the style change to 3D models was off-putting at first, it grows on you. The animation is snappy and full of energy, and it works really well for the experience. 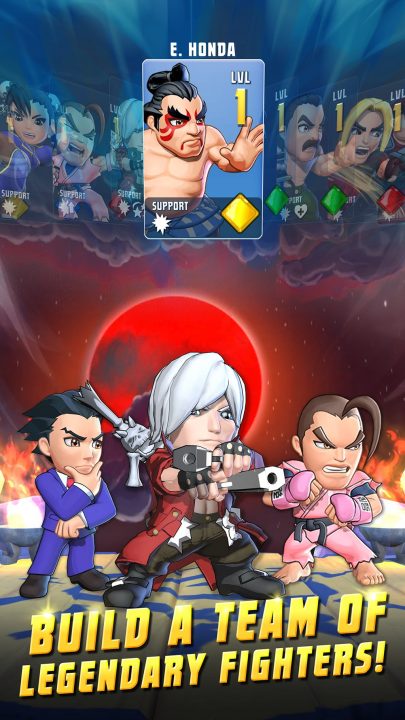 The cast of characters aren’t the only great part of the game, as there are a lot other cool Capcom nods. Puzzle Fighter gathers several stages from all over Capcom’s franchises, with music remixes and colorful details in tow. Games like Okami, Resident Evil, and even Power Stone get referenced in some of these great stages. There is a slight caveat to this, as stages are selected based on the highest ranked player. This would mean that some of the earlier stages will only be seen in the Mission Mode as you move up the ranks. Still, it’s great to see Capcom acknowledge Power Stone again after all these years.

Speaking of Mission Mode, Puzzle Fighter gives a selection of missions and quests for players to do every day. Mission Mode gives three missions daily, challenging players to defeat an opponent on one of four difficulty settings. The layout suggests that other mission types will be added in the future, but for now, it’s pretty simplistic. Completing these missions will earn points and a basic chest, which will reward players skill cards, characters, skins, coins and gems (in-game currency). Getting enough points can earn rarer chests, which not only provide more rewards, but also a higher chance of earning better items.

Quests are a bit more unique, offering random requirements like building certain shaped power gems or winning online matches. Some are even easy prizes, giving free chests or rewards as well as points toward the quest meter. Finishing the quest meter will also unlock a rare chest, so it’s worth doing them every day. Unfortunately, some of the quests will take a bit longer to finish, so sometimes it may be better to refresh the quest for a new one. This can also work for missions, in case an easy mission can’t provide enough points to get to a chest. 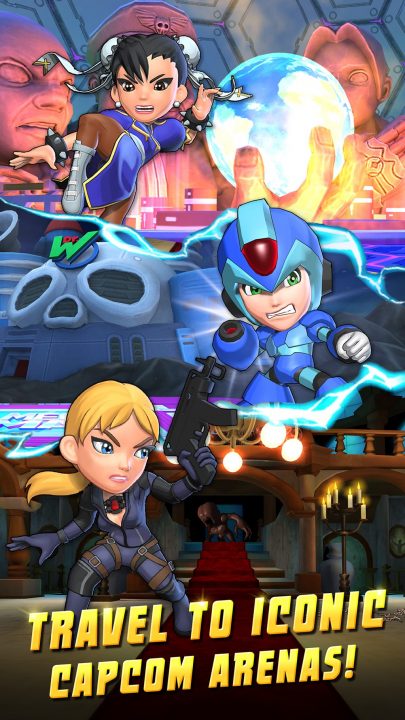 Having mentioned skill cards earlier, these are required to power up each character in both skill and power. Ryu’s Hadoken for example needs skill cards to level up, and each level up gives Ryu experience to make him stronger. As Hadoken levels up, the strength of the skill also improves. More skill cards are needed to make it to the next level, making it a bit of a grind to make a character stronger. Skill cards are only part of the requirement though, as coins are also needed to level up a skill. As characters unlock, the odds of gaining certain skills decreases, mainly because there are more cards to pull from. While this process wouldn’t work well for a console title, it works fine enough for a mobile game. It feels like the perfect incentive to keep players coming back to build their ultimate team.

Each character starts with two skills and a third one can be unlocked from acquiring the skill card. The game seems to suggest more skills will be added later on, but for now, each character only has three, two of which can be equipped at a time. Some characters need a variety of power gems to activate their skills. Others, like Jill Valentine, have the same power gem for all three of her skills, making her very formidable. Characters will also have a super attack, as breaking gems will fullness their super meter. Once full, players can unleash a devastating attack that can even interrupt yournopponent’s attacks. Puzzle Fighter is still trying to find balance between characters, with M. Bison being a top pick for players currently. Capcom continues to work on the balance through patches, so feedback from the players is key.

Regardless of the great presentation, the game can be rough at times. Sometimes, lag or connectivity issues can completely make the game unplayable. I personally had two matches where the game was loading, only for my opponent to already start attacking me. I haven’t seen that since some recent patches, so at least it seems to be gone for now. Matchmaking can also be improved as some players might end up matched with someone of a much higher skill ranking. Despite this, the Mission Mode gives beginning players a way to practice new strategies, so there is that at least. Regardless, it would be nice to give new players a way to practice without stakes. 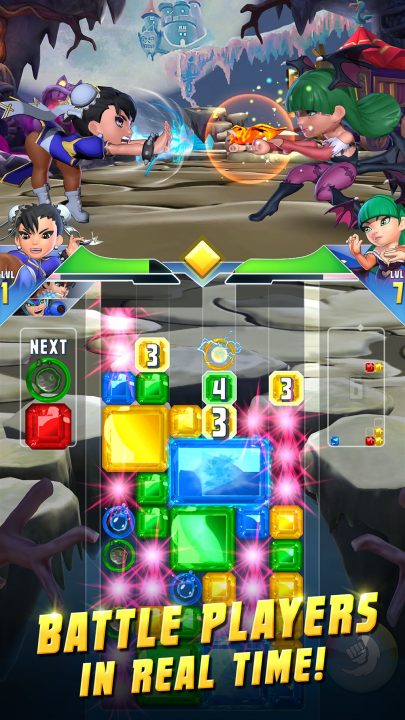 Regarding the elephant in the room, microtransactions, Puzzle Fighter does a good job making them avoidable. A player can enjoy the game completely for free and still experience all there is to offer. Players may give in to buying things if they want something immediately, but most things will come in due time. Overall, Puzzle Fighter is a rewarding and exhilarating experience. Matches get the blood pumping like a normal fighting game, and the gameplay is a unique take. Capcom seems to have hit a home run with this one, and hopefully it does well for them. It would be great to see more games revived like this.