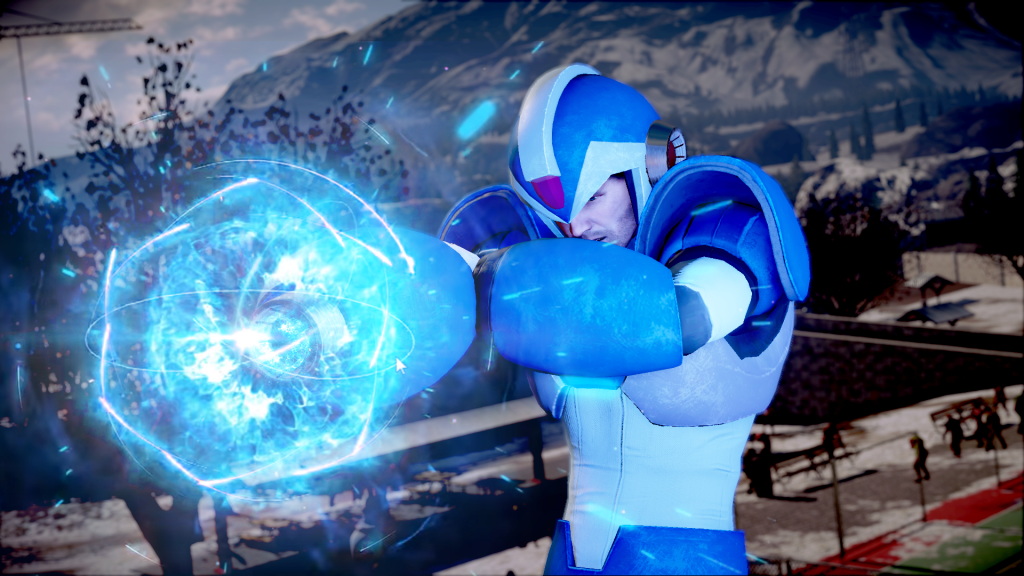 We’ve had a chance to check out the massive Dead Rising 4: Frank’s Big Package, which includes the base game released on Xbox One last year, as well as all of the downloadable content that came out, giving it quite a lot of content for zombie slayers to enjoy.

Frank West returns, older and more grizzled, but retaining his old sense of humor that fans of the series have come to expect. He is tricked into returning to the town featured in the first game, Willamette, by Vick, a student of his. He resists at first, but quickly gives in and attempts to help unravel the mystery behind the reappearance of zombies in the town as the two investigate a military base. 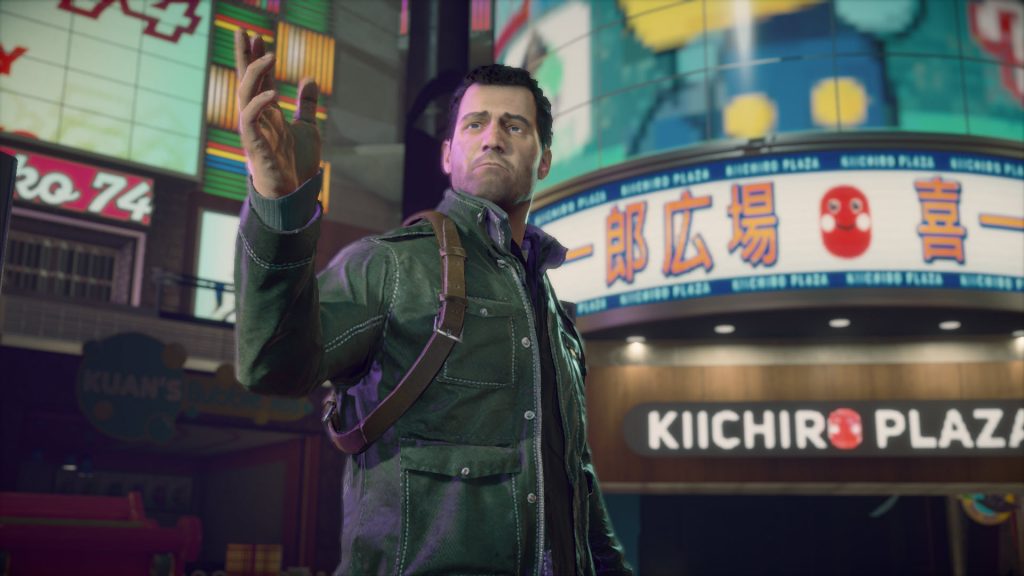 Shortly after, he winds up back in the Willamette mall, which is quite huge, and eventually into the town itself. I don’t really want to say anything more, as it may spoil the story a bit, and the twists and turns are actually rather interesting for the most part, so let’s just say that the story should be enough to keep you hooked as you slaughter zombies by the score again.

Those who have played prior Dead RIsing titles have certain expectations in mind when they adventure into a zombie-fest, including a timer limiting the time you can spend slaughtering the undead. In Dead Rising 4, this timer was removed, and though many series fans were upset with this change, the sheer size of Willamette actually means that the title benefits from this removal, in my opinion. With it, you aren’t stressed to finish the game super quickly, and can actively explore the town, which is definitely nice as there are a ton of secrets to uncover.

You can craft a variety of weapons, and the title can be quite difficult right off, if you, like me, dive right into the hardest difficulty. The first few encounters are easy enough, but you soon enter a room completely filled with the undead that you need to fight through, and, even though you obtain quite a powerful weapon that introduces you to the crafting system, this weapon only takes out about a third of the undead present if used well before it breaks. What follows is a mad dash between the three rooms as you attempt to gain other weapons (I had a full four at the time and every one, including the four others I found in the room, broke with still probably thirty or more zombies present), healing items (the undead can pack a pretty decent punch on the hardest difficulty, at least at first), and, if all else fails, your own fists.

Once you get to explore the world itself, you will be able to find a large number of blueprints to build new weapons and vehicles, and the map can become covered in destination points. That said, these side quests are optional, and, if you wish, you can even ignore the Maniac bosses, which take the place of series Psychos from prior titles. 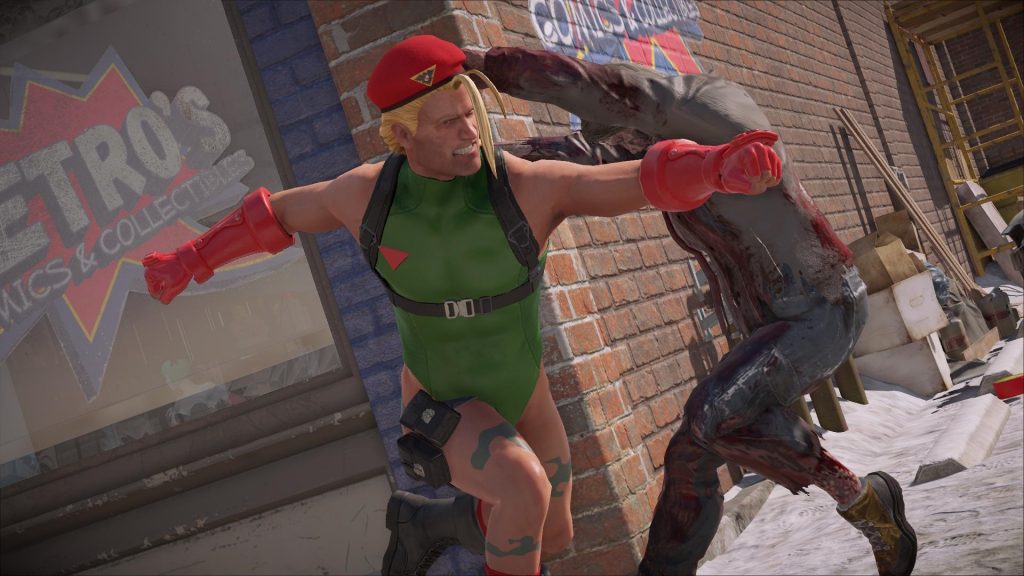 There is a quick travel system, but I personally felt it was more fun to actually move from point to point on foot or in vehicle. Of course, this can easily lead to quite a few situations as I described in the first area, with you running out of weapons in your arsenal and needing to either hightail it out of there or resort to fisticuffs… although the first can admittedly be difficult when you are, quite literally, surrounded by hundreds of zombies wanting to devour you. This goes to show that, though the game’s tone is typically light, it can deliver up some moments of white knuckle tension if you aren’t too careful.

The title takes place during the holiday season, and actually uses this to its advantage, bombarding the player with some rather morbid holiday humor, festive weapons, and costumes. The included Stocking Stuffer downloadable content even reskins the enemies and survivors as elves, gingerbread men, reindeer, and even snowmen while Christmas music plays in the background and menus. 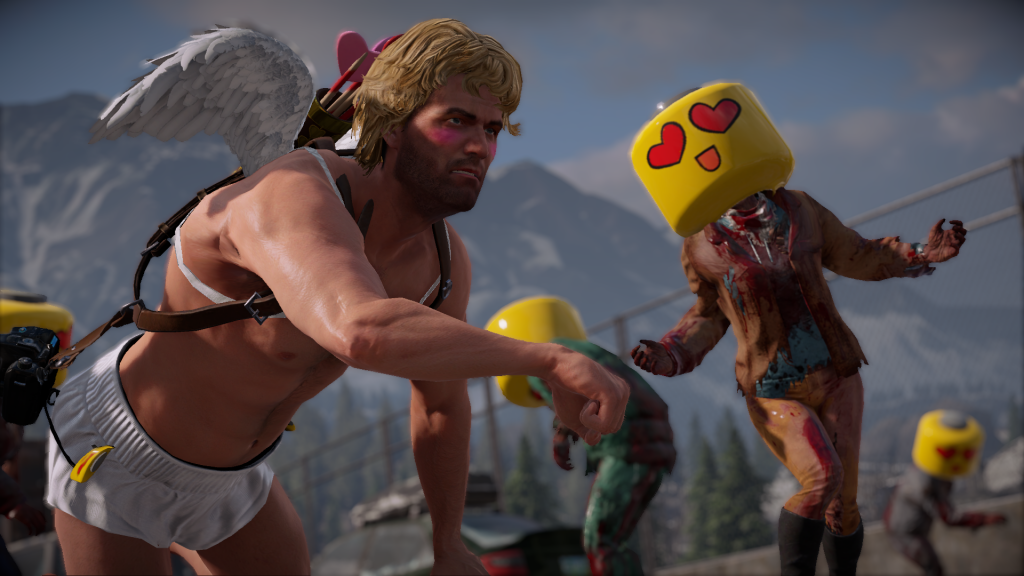 Another bit of downloadable content included is the Frank Rising content, which adds in an extra hour and half to the game and resolves the ending. You also have Super Ultra Dead Rising 4 Mini Golf, which is an odd, yet fun, simplified golf game in which you can hit the ball into zombies to rack up your points. You only have a putter, driver, and wedge, and it features a three-click control method that typical golf games utilize, but the courses seem to have had quite a bit of love spent during the design phase, and some of the shots can require quite a bit of thought and skill. It may not feel as polished as actual golf titles can, which is understandable, being a mini-game, but it can still give you quite a bit of fun on the side.

Another new mode is the Capcom Heroes mode, which actually retools the entire game in order to support it. You will begin as Frank per usual, however instead of locating pieces and blueprints for weapons and vehicles, you will locate Capcom-themed stars and treasures, which allows you to play as one of the 17 different characters for a short time. Each of these characters has his or her own powers, with Megaman utilizing his arm cannon and power shot to destroy the undead and Dante utilizing his trademark sword and twin pistols.

As you collect costumes and powers, you can visit various arcade machines to test them out. As mentioned, it replaces the blueprints, so you actually lose the ability to craft, and thus you will need to keep an eye on the timer to ensure that you don’t run out of power in the middle of a huge horde.

Honestly, if you’ve missed out on the title when it originally released, you’ll probably want to check out Frank’s Big Package, providing you enjoyed the prior titles, of course. With plenty to do, a large open world, and a lack of a timer that could feel constricting in prior titles, it can be quite easy to get lost in the game for hours on end.