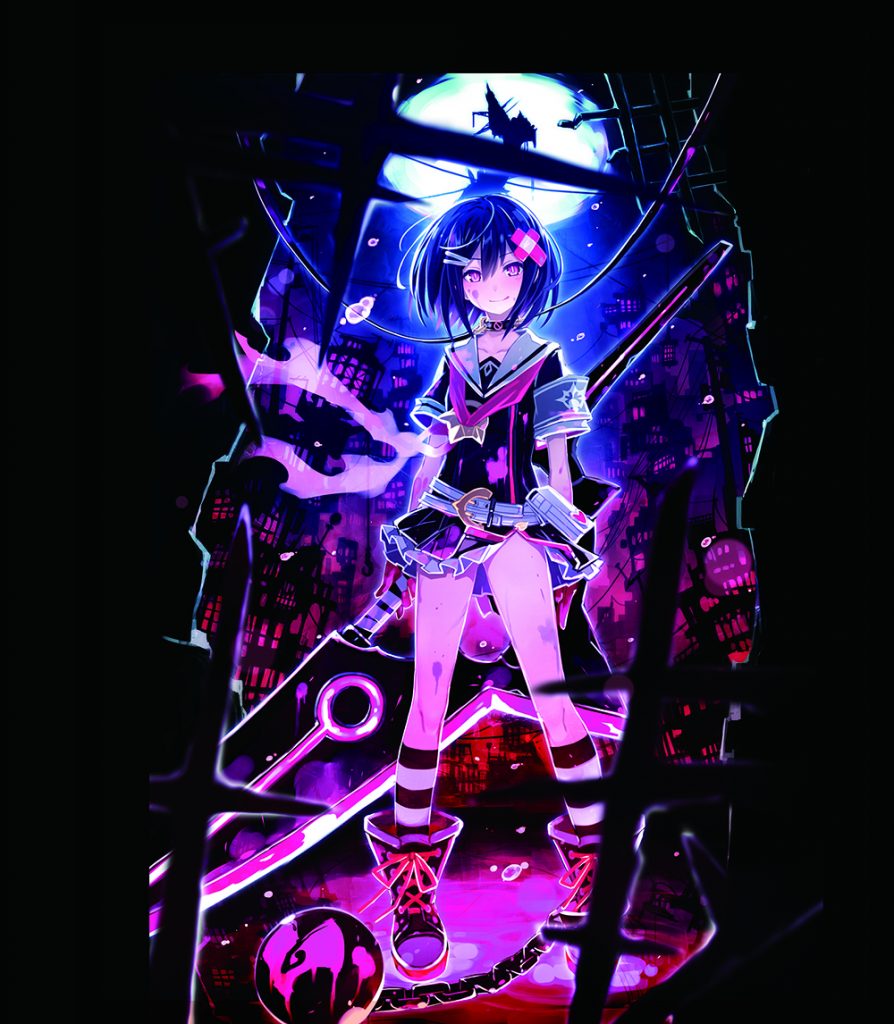 As Halloween draws ever closer, we have finally managed to get through a strange little dungeon crawler known as Mary Skelter: Nightmares for the PlayStation Vita. How will it stand up?

The title begins with a couple of fairy tale characters inside of a strange, living jail that suddenly appeared one day and captured a number of people. Jack (from Jack and the Beanstalk) and Alice (Alice in Wonderland) have been friends for quite a long time, and have been inside this jail for a while, tortured and forced to do strange tasks by the creatures known as Marchens, such as licking blood off the jail’s walls, every single day.

Soon after the game begins, the pair are rescued by a Blood Maiden, a person who has the power to defeat these Marchens. This Blood Maiden is none other than Red Riding Hood, and she escorts Alice and Jack to the Liberated District, which is a safe haven for the humans within the area.

Alice is discovered to also be one of these Blood Maidens, and Jack, though appearing useless at first glance, quickly proves that he is not, as his very blood can actually help pure the corruption the Maidens suffer, bringing them back from a state in which they rampage and attack everything in sight, friend and foe alike, known as Blood Skelter. This officially makes him the first known “Blood Youth”, and he begins accompanying the Maidens as they seek a way out of the nightmare that is the living jail. 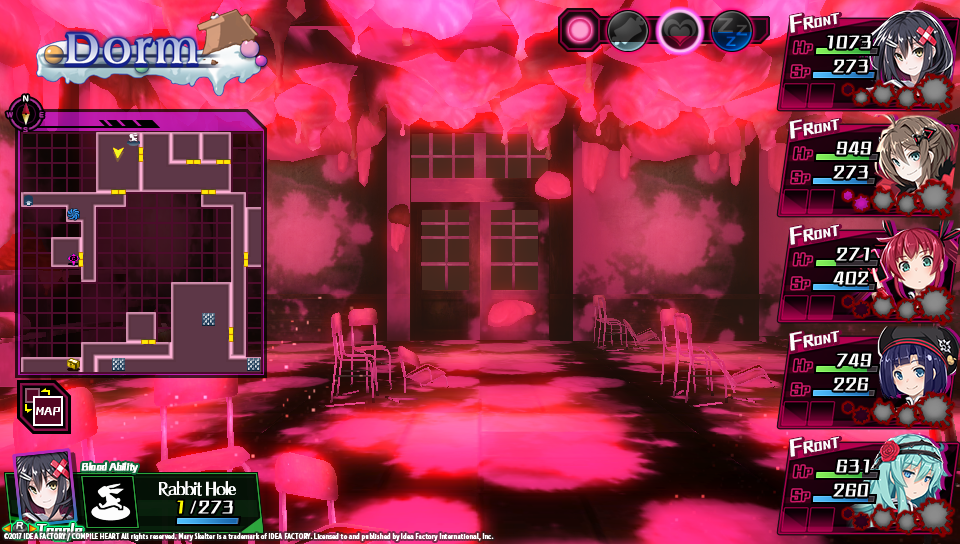 The story is rather deep, and the characters’ thoughts and desires tend to be in line with the thoughts and desires of the fairy tale characters they are based on; For example Jack keeps wanting to climb the tower for some reason that he doesn’t even understand. He and Alice tend to be wary of the others at first, which is understandable, considering that they were only recently freed and everybody is a stranger at first.

At first, Mary Skelter: Nightmares appears to be your typical dungeon crawling role-playing game, and, to an extent, it is. That said, there are several features that help keep things interesting.

First up is the environment itself. Being a living thing, the jail has several desires, which are reflected by its hunger, sleep, and libido. You can satiate these desires in a number of ways. To satisfy the jail’s libido, you need to locate items or emotion points. For sleep you need to make it through battles without being touched. For hunger, you need to overkill enemies or attack their weak points. 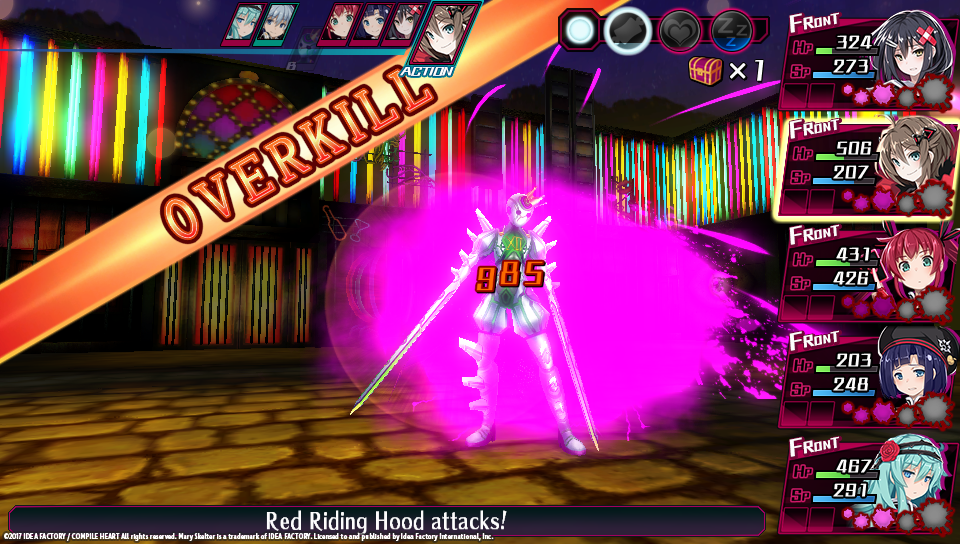 There are benefits to filling the respective gauges, as doing so allows you to spin a bonus wheel. This wheel will offer up benefits such as restoring your characters’ health, granting treasure, or even maturing the dungeon and thus causing it to grow, creating new areas for you to explore. These benefits can be quite useful, especially if you are in a tough battle and manage to get the Recovery benefit, which fully restores all of your health and skill.

As you can cause new areas to open, many maps end up being quite large, which can make it take a long time to fully investigate everything if you’re one of those that just has to complete a map to the very last square. Of course, there is an auto-navigation feature as well, allowing you to automatically set a point to move to (assuming there is actually a path, of course; You can’t tell it to take you behind a locked door without first opening said door, for example) which can make things a bit easier.

There are also areas on the map that are only accessible if you have certain characters within your party. Early on, for example, there are a number of wire gates and crates that you need Red Riding Hood’s ability to cut through if you wish to check out what lies beyond. Alice, on the other hand, has an ability to allow you to create a save and escape point from the dungeon at any area, which can be extremely useful as the game can be quite brutal to the unprepared. 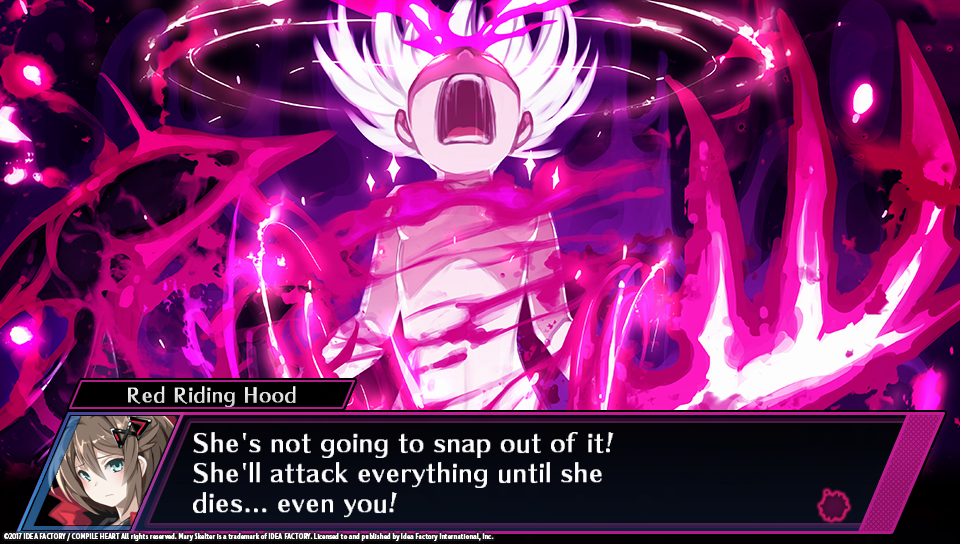 One example of the latter is actually the second area, after Alice and Red Riding Hood head off and you get two other characters. As you try to find the duo, you enter another section of the jail… and despite these new characters being level 10 (I’d cleared out the first area at level 6), the second area proved to be host to some extremely powerful beasts that wiped me out in a couple of turns. This actually forced me to pick my battles, waiting on mobs with only one or two enemies in the area at first and utilizing the two Maidens’ skills wisely in order to survive. It was alleviated once I ran into Alice and Red Riding Hood again, but I then began exploring the first area some more, curious as to how much I could make it grow, which could also explain for the alleviation of difficulty in the second area when I finished and went back. Either way, you will want to save quite often in order to be safe, otherwise you could lose quite a lot of progress when you run into a fight you can’t escape from in time and cannot handle at your current level of strength.

Another reason to regularly save lies within the boss battles, known as Nightmares. These mighty beasts patrol the labyrinth and, if you are spotted, you enter a “Blood Hunt” mode, in which you need to escape from it. You can try to fight and knock it down, but they are indestructible until you destroy the core in each area, and they can wipe you out with ease in many cases. 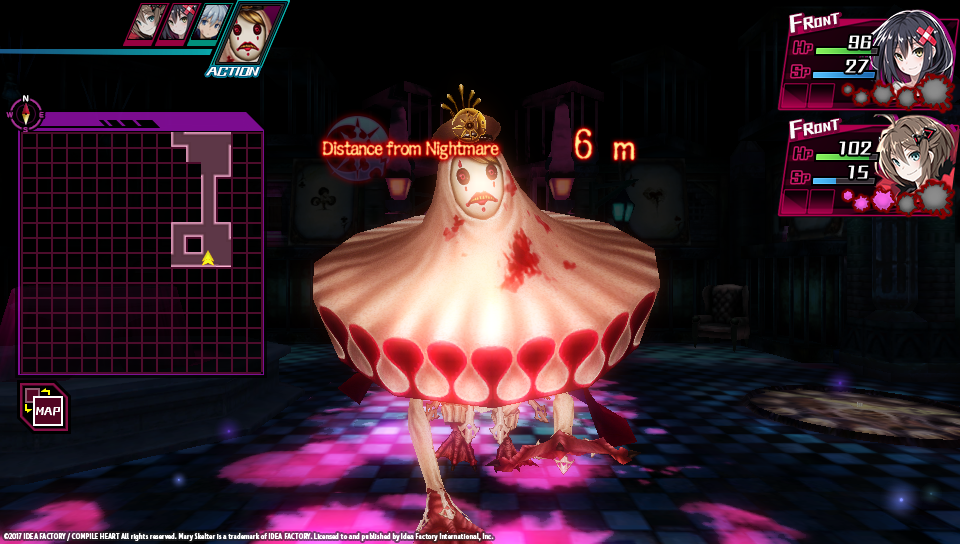 As you explore you will also find various memos in the dungeon. These memos are guarded by enemies and provide hints on what to do; One memo early on suggests destroying an obstacle with poison, for example, with one of your characters featuring a poison bomb.

As you battle through the dungeons and get blood splattered, your Maidens draw ever closer to entering a powerful state known as Massacre Mode. Be careful, however; If they take enough damage, the blood will darken, and they will enter a rampage known as Blood Skelter, in which they will randomly attack anything, friend and foe alike. This can be cured later on by Jack’s Mary Gun, which allows him to purify the Maidens by shooting them with his blood. This gun comes with the risk of stunning Jack, however, and, if stunned enough, can even knock him out. 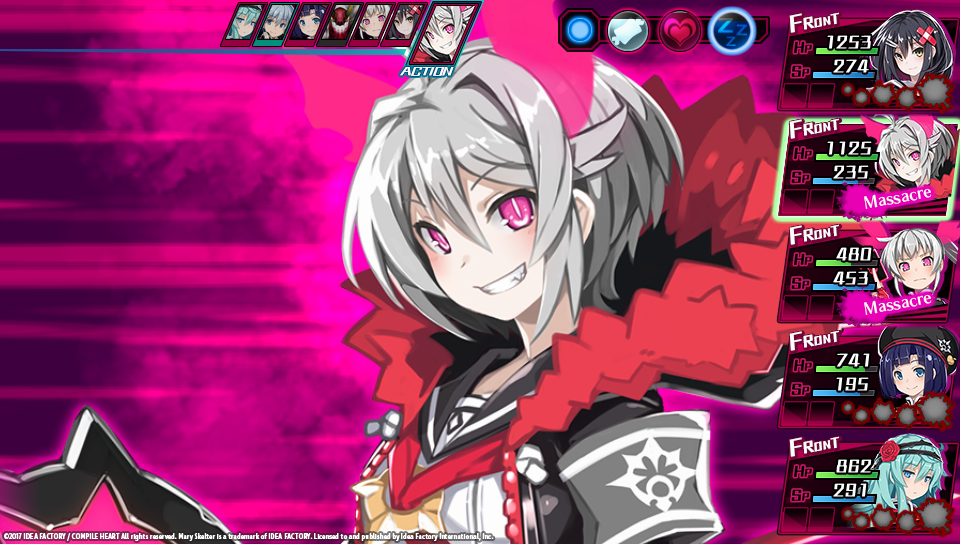 Jack is also special in the sense that he cannot really fight himself; Instead he is the only one that can use items. He can also guard a maiden that you choose from a single attack, though this will, more  often than not (I personally had a couple of occasions in which it did not) leave Jack stunned and unable to act for a couple of turns, so you need to be careful with it, especially since he is the only one that can utilize items.

The dungeon is interestingly designed, and the music can be quite haunting at times. It isn’t as full of fanservice as many of the developer’s other games, which, depending on your point of view, can either be a positive or negative thing, but the art style feels like it fits quite well with most, if not all, of the music, which is also appropriately haunting in many locations, such as the graveyard.

Honestly, if you enjoy dungeon crawling role-playing games, there’s not really any reason that you should dislike Mary Skelter: Nightmares. The story and gameplay are both rather solid, and it feels like it may be one of the best games in the genre that I’ve played in quite a while.