Fighting game fans have had a lot to do this month. For the lucky few that managed to play in the Dragon Ball FighterZ closed beta, there was some excitement there. Marvel vs. Capcom: Infinite launched with critical praise despite the lukewarm welcome from fans. Despite all of this, Nintendo also released their own fighter with Pokken Tournament DX. While Pokkén Tournament has already had a release on the Wii U, it’s given a second life on the Switch. With additional content and a nice graphical bump, not to mention the added portability, it gives players a reason to give it another look.

Pokkén Tournament, developed by Bandai Namco, is often considered to be a combination of the Pokémon and Tekken franchises. While there are similarities, Pokkén Tournament is its own beast. What Pokkén does different from other fighters is the “phase shift” mechanic, shifting from arena style battles to a two-dimensional plane. All battles start in the Field Phase, as both combatants move around the field until one takes enough damage to shift into the Duel Phase. The Duel Phase offers some slight changes in the combat, but overall maintains a similar set of moves. 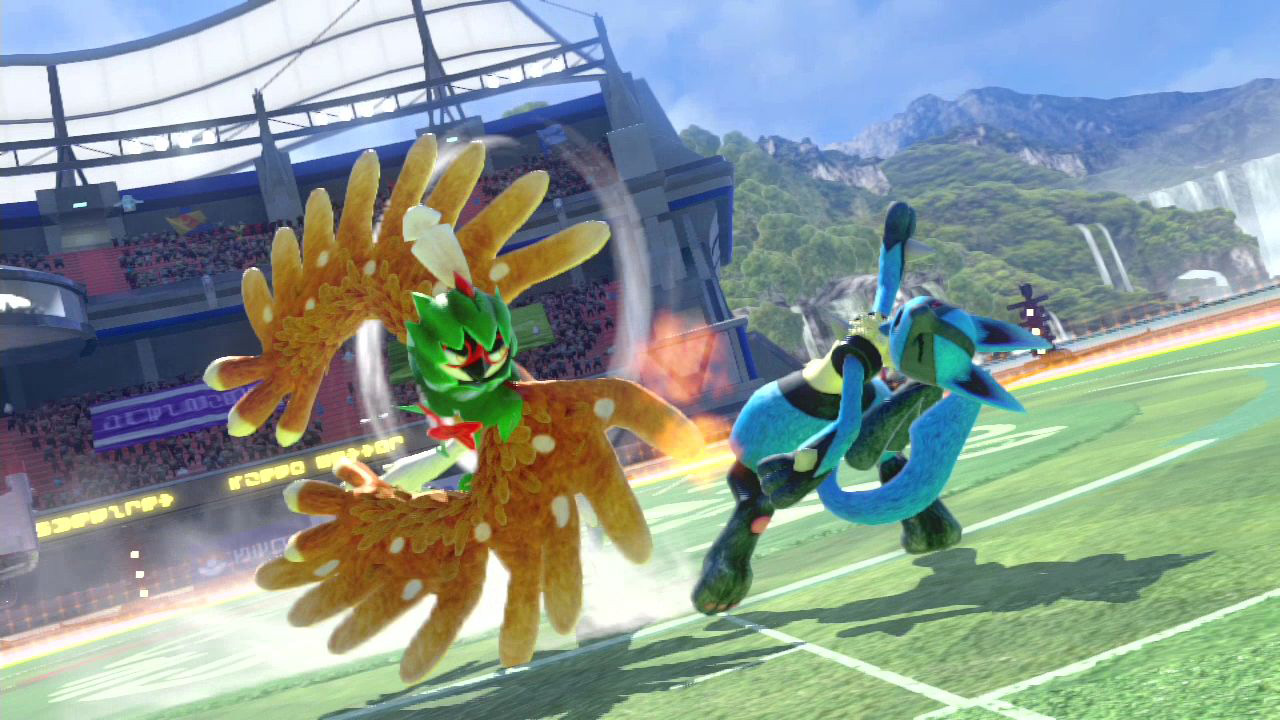 Pokkén Tournament on the Wii U originally had just 16 characters, while the arcade version added four extra characters over time. The Switch version maintains those 20 characters, but adds an additional one from the current generation of games with Decidueye. All the characters feel incredibly unique, from their play style to their personalities. Croagunk, one of the newer fighters, acts as the prankster of the fighters, and it shows in his combat moves. On the other hand, Charizard seems like a serious fighter, showing off a sense of ferocity with everything he does. Then there’s Chandelure, who treats everything like a game and has a childlike innocence in their personality.

The gameplay holds plenty of depth, with three attack buttons each performing a different attack depending on the direction being used. Then there is a jump button that allows aerial attacks, which then creates even more moves with the attack buttons. Characters will also have a throw, a button to call in support Pokémon, and their Synergy Burst. Synergy Bursts are a transformation that make the Pokémon more powerful, also allowing their Burst Attack. Even though most Pokémon follow these mechanics, some, like Darkrai, have exclusive traits that give them even more moves, adding further depth to their combat. Fighting game fans will definitely find a favorite play style, I for one love the way Lucario and Scizor fight. Croagunk is also a personal favorite as his unpredictable nature makes him very different. 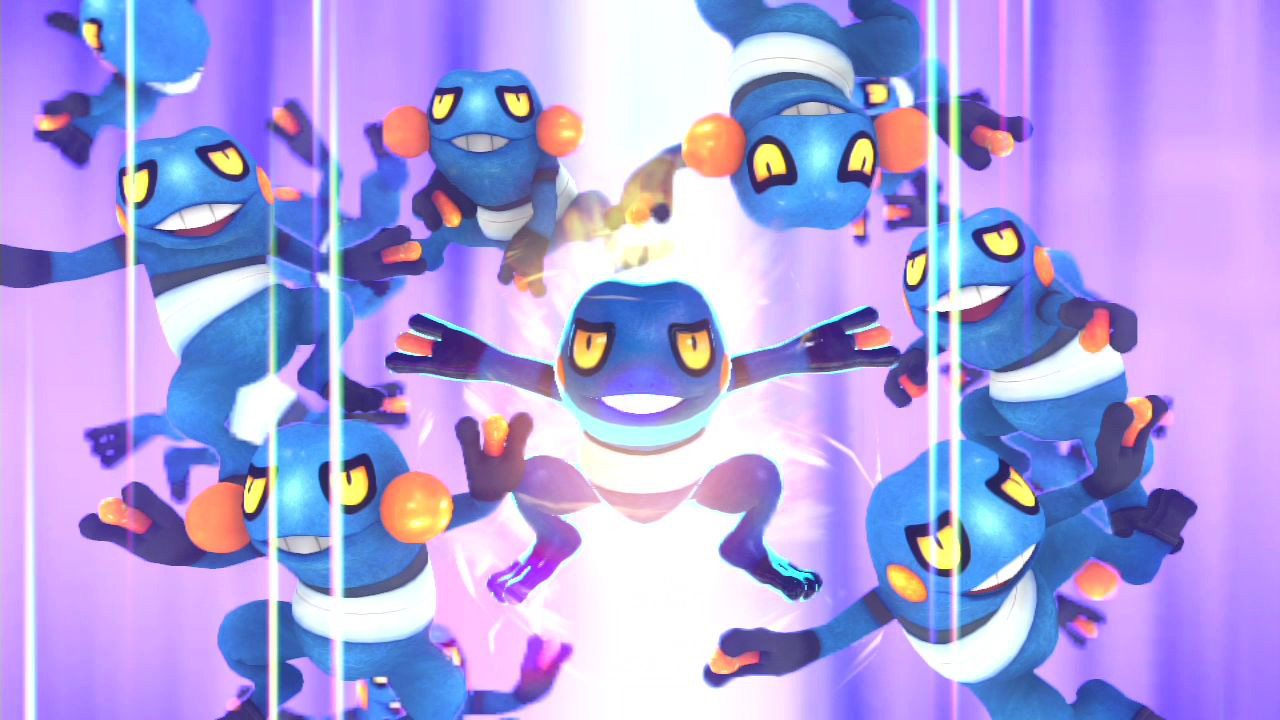 Getting to some of the other features, Pokkén Tournament gives players an opportunity to pick a set of support Pokémon. New to DX is Litten and Popplio, though everyone else from the Wii U version returns as well, and all unlocked from the start to boot. Support Pokémon don’t make the difference in a fight, but they can help out in a bind, or even to help apply pressure to an opponent. Players will pick one before each round, and they’ll charge throughout the battle. Under certain situations, the player advisor, Nia, will automatically charge a support Pokémon given a specific cheer. Nia herself is a bit of an issue with the game, but we’ll get to that in a moment.

Pokkén Tournament DX also offers a couple of new modes. There is a Daily Challenge that allows players to fulfill specific conditions to gain bonus rewards, usually skill points for their Pokémon or cosmetic items for their trainer. There is also a new three-on-three mode that allows players to create a team of three Pokémon to use in a battle. It’s not exactly a tag-team style, but it does help to add more variety to a match. Though not really a mode, there are new online groups that players can create to compete amongst friends. Overall, not much else has changed besides Mission panels during the campaign. 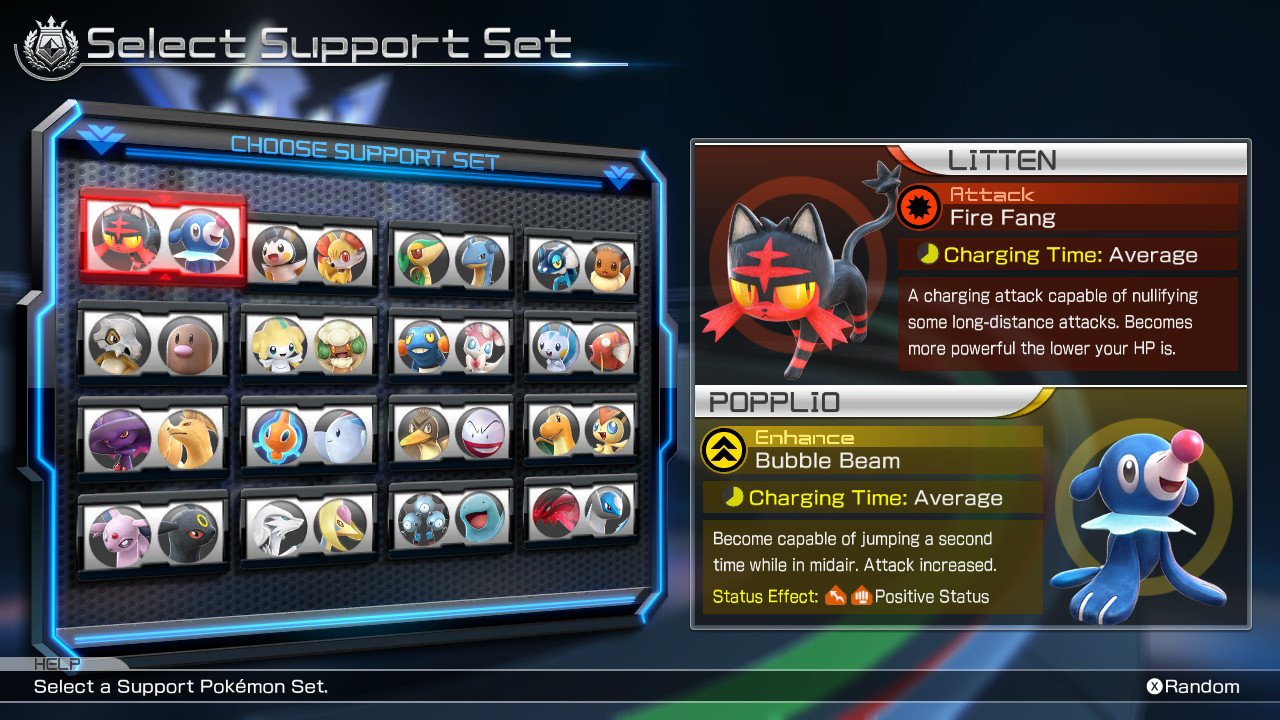 Speaking of the campaign, the game takes players to the Ferrum League where the compete to be the best. Although the competition gets tougher over time, it works in a story as well. Players become involved in a plot revolving around Shadow Mewtwo, a Pokémon shrouded in mystery. It’s a fun little distraction with narrative snippets here and there, but overall it’s not much of a story. The biggest issue is the voice acting, as the characters all talk with a very dry tone. They also speak incredibly slow, which makes it feel almost demeaning. Granted, it’s not a big deal for a younger audience, but with the anime in existence, there is no excuse. Aside from the voice acting, the rest of the presentation is pretty good.

The game has 21 stages, two of which are new to the Switch version. With Decidueye, Litten and Popplio, it’s nice to see a little more Alola love in the Thalia Beach stage. Stages don’t really offer much variety outside of their size and visual presentation. Perhaps a sequel can add destructible environments or stage hazards, or even environment changes. Overall, the game maintains focus on the fighting, and that’s where Pokkén Tournament DX shines best. The game looks beautiful in motion and the characters look great, giving a more realistic appearance than other games. All the Pokémon display fantastic looking special attacks, and most Burst attacks are a treat to watch. 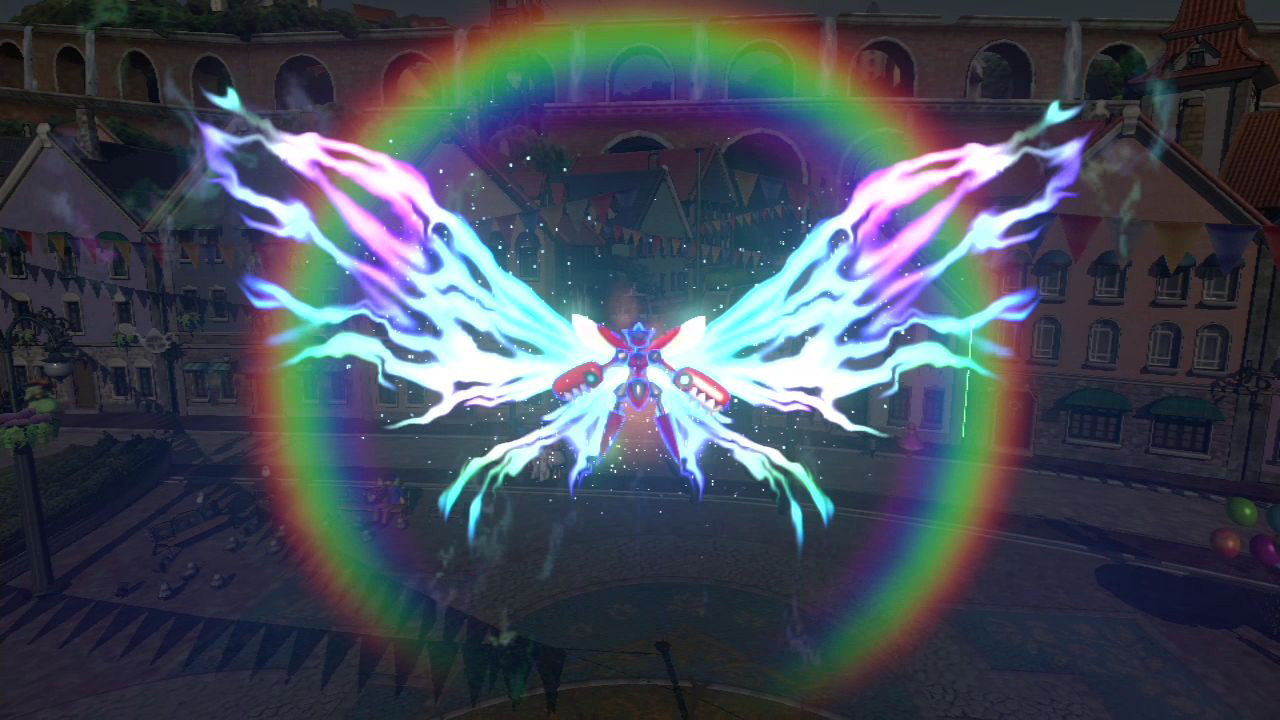 Music in the game is fun and energetic, most of the stages having their own theme to help with the atmosphere. Synergy Bursts will also have their own theme, which helps to amp up the tension in a battle. Being that all the fighters are Pokémon, none of them will speak, but they all have a voice of their own. If not for the voice acting in the story, Pokkén Tournament DX wouldn’t have any complaints in the audio department.

The online for the game seems to work without any real problems. Even against a Japanese player, I didn’t run into any lag. That isn’t to say there is no lag at all, as I have encountered it with a handful of players. Regardless, the online is mostly seamless, with the exception of a little input delay sometimes. When joining a group, I did run into an issue where I couldn’t find any players. After ten seconds, the game automatically puts players in a match against a CPU. Once a player is found, then a real math begins. In groups, it doesn’t seem to know when players are unavailable, as it will seek players regardless. My experience just put me through endless CPU battles. 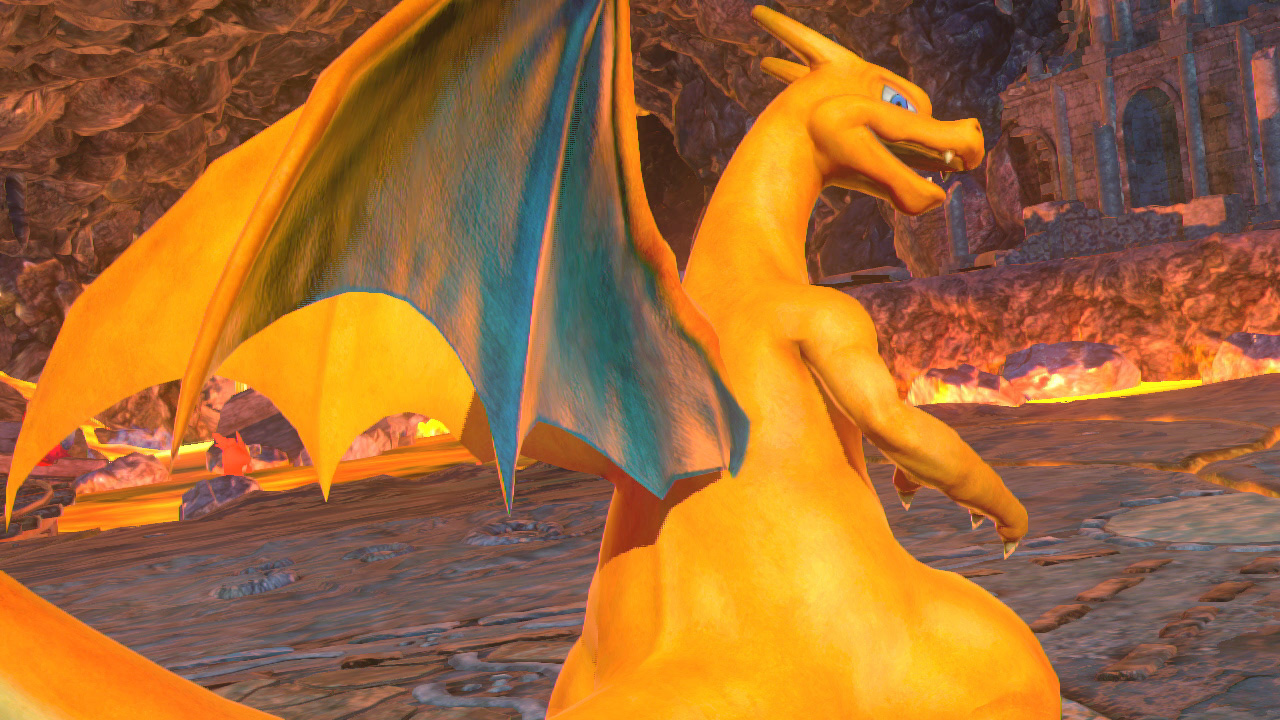 Local play is a huge improvement from the original release. In the Wii U game, players would only be able to battle with one person on the TV, the other using the gamepad. The Switch version adds splitscreen, giving a more convenient option, especially in tabletop mode. Downside to splitscreen is that it does take a hit in the performance of the game. Local wireless is also an option for players with two Switch consoles, giving both players their own screen. This is the more ideal option, as it maintains the performance that the main game offers.

Overall, Pokkén Tournament DX improves upon what the Wii U original started. Given the popularity of the Switch, this will give the game a new audience of players all around the world. With a fantastic selection of fighters, a decent campaign, and tons of depth in the combat. Now that it’s available for the Switch, fans can enjoy the game on the big screen or on the go. Much like Arms, Pokkén Tournament DX is a fantastic entry to the Switch’s ever-growing library.