It’s practically a miracle. A new union of the entertainment giant Marvel with the game developer Capcom, fans likely didn’t think it would happen again. After the stellar Marvel vs. Capcom 3 (and the Ultimate version), Capcom lost the license to continue supporting the game. This was due to Disney not renewing their license with Capcom, opting to use their Marvel brand in self-published titles. When Disney Infinity was canceled, Disney opened up to licensing their franchises again. In comes Marvel vs. Capcom: Infinite, the newest entry in a long running series adored by fans all over the world. Despite being a nice surprise, the game still has some challenges to overcome. 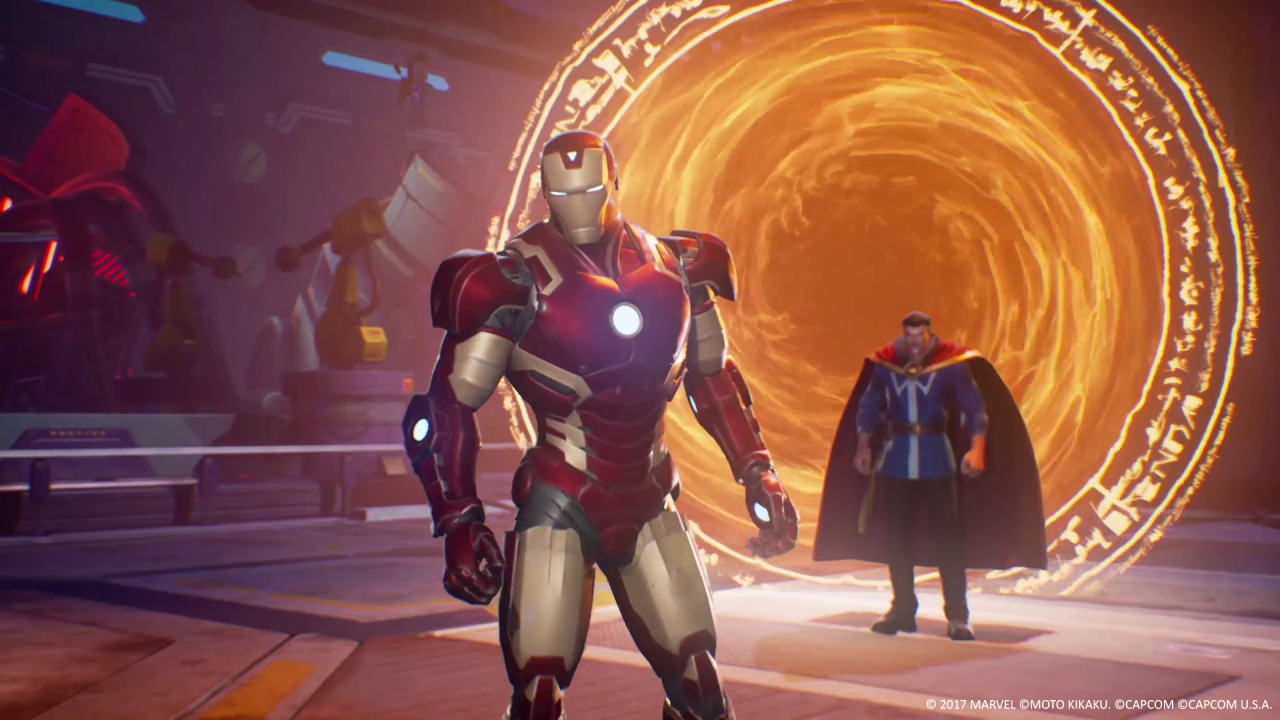 There is a good reason why this isn’t Marvel vs. Capcom 4, as the mechanics and style of Infinite work completely different. Working into a 2-on-2 system, Marvel vs. Capcom: Infinite seems to take a step back in the series. Gone are assists and snap back attacks, as the new system does away with those features. Replacing those mechanics however are the Infinity Stones, six gems that can be selected to change the way players will fight. Space, Reality, Time, Power, Soul, and Mind: six different modifiers that can help make a difference. This mechanic returns from Marvel Super Heroes, one of the earliest titles in the series.

Despite losing the 3-on-3 aspect of it’s predecessors, Marvel vs. Capcom: Infinite still remains to be as frantic as ever. Using the Infinity Stones in unique ways can cause some brand new events we could never imagine. When using the Time stone for example, a player can repeatedly heavy kick their opponent in the corner at a speed that would make Chun-li jealous. The Soul stone can not only bring back a fallen comrade, but it can also create a dangerous setup of draining health constantly from both sides. This can be a gamble though, as having both characters out at once leaves them both open to attacks. Overall, the Infinity Stones add a fresh element to the series that also creates a new layer of depth for players. 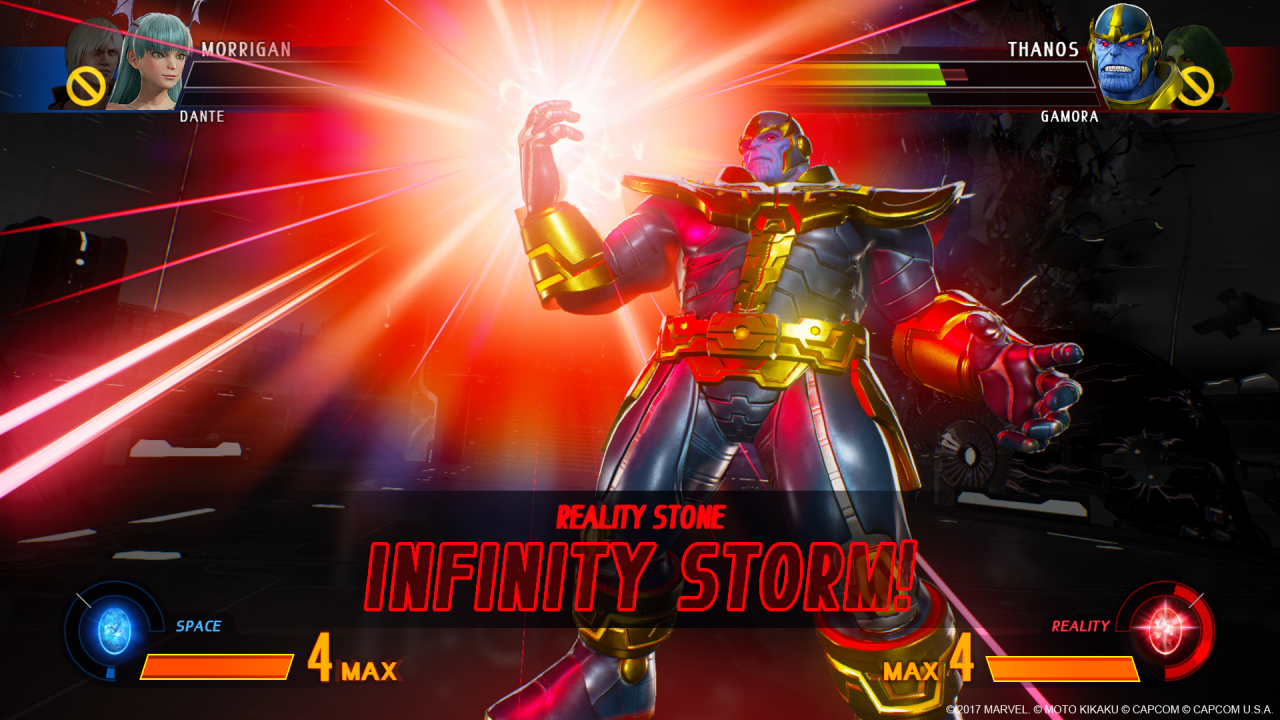 It seems that Capcom felt it necessary to add a cinematic story mode to Infinite, likely to makeup for the lack of one in the last game. While the story won’t win any awards, it still manages to create fun moments for fans to appreciate. Watching characters interact in a story like this feels reminiscent of the Project X Zone series. Hulk and Ryu explore their anger issues together while Iron Man offers to build a new arm for Nathan Spencer. Some of the moments can be rather cheesy, but others can invoke a legitimate laugh, perhaps due to the ridiculousness the series already offers.

Without spoiling too much of the story, the Marvel and Capcom universes collide, merging familiar worlds like Monster Hunter’s Val Habar and Wakanda, the home of Black Panther. As the worlds combine, so does two of their villains, Ultron and Sigma. Using the Reality and Space stones, the two robotic villains form Ultron Sigma, hellbent on ruling the new universe. While the story is ambitious, it does take a hit in the presentation department. Animations are a little stiff, loading screens are plentiful, and the overall art style could use improvements. 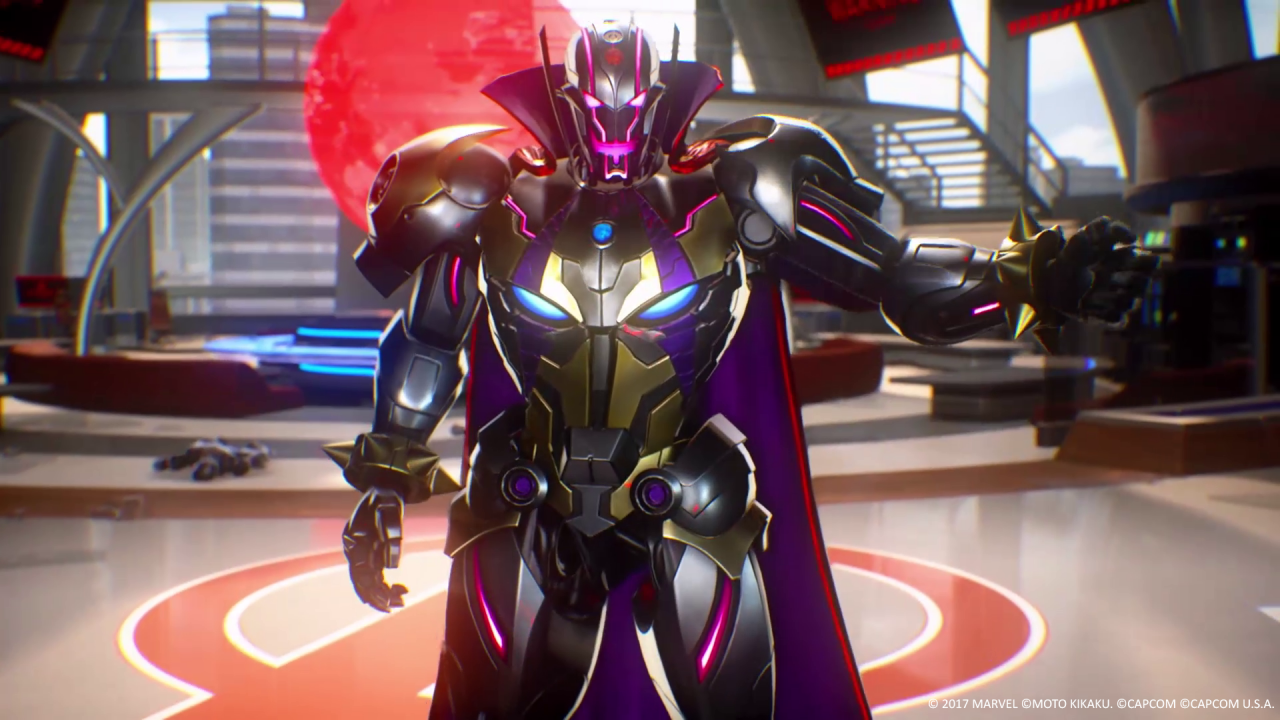 Speaking of the art style, this has been cause for plenty of criticism from fans before the release of the game. While some characters like Jedah, Captain Marvel and Strider Hiryu look great, others take an odd U-turn in quality. Rocket Racoon for example seems to clash heavily with other characters due to his fur coat. Hair in general is among the more problematic elements, creating one of the biggest clashes in the art style. The overall tone of the colors seems a bit off too, lacking the vibrant nature we’re used to with this series. It’s worth mentioning that Capcom has significantly improved the visuals, and the effort does show, even if only a little.

The game does look best when in a battle, which is what matters most. Fighting is fast and intense, and the colors get a bit crazier during a Hyper Combo or Infinity Storm. Fans may miss the cel-shaded style of the previous game, but don’t let the visuals push you away. The game plays fantastically, and though the new mechanics take getting used to, it’s still Marvel vs. Capcom. The game takes liberties with making the game more accessible for new players too. Now there are easy combos and easy Hyper Combos, making the game more user friendly than ever. Even without the accessible features, the combat is still just as deep as ever, offering plenty of options for setting up new tactics.

Despite the fact the fighting mechanics are quite good, one particular mechanic feels like it could be removed. Advancing guard isn’t a new feature, but it has a new additional use. When timed right, blocking while simply pressing two buttons can deflect a projectile back at an opponent. While this might sound fine in theory, it creates more chaos and punishes players trying to use projectiles to pressure their opponent. It can be nice to reduce spammers from using cheap tactics, but something about the ability just feels a bit off. Other than that, the other mechanics work fine. Active switching during a combo helps to keep the momentum going as a partner is tagged in. Infinity Surges and Infinity Storms help to make things interesting during matches.

Moving away from the presentation and gameplay, the roster can leave a lot to be desired. Disappointed players saw that there weren’t too many new characters, or even the lack of more female characters. A lot of the characters come straight from Ultimate Marvel vs. Capcom 3, and with only five new characters, it feels a bit uninspired. While not exactly a bad roster, fans are feeling forced to buy the character pass for brand new characters like Sigma or Monster Hunter. Upset fans also complain about the lack of the X-Men property, which makes sense given the series’ roots. Wolverine is a huge part of this franchise, and not having him here is pretty noticeable. 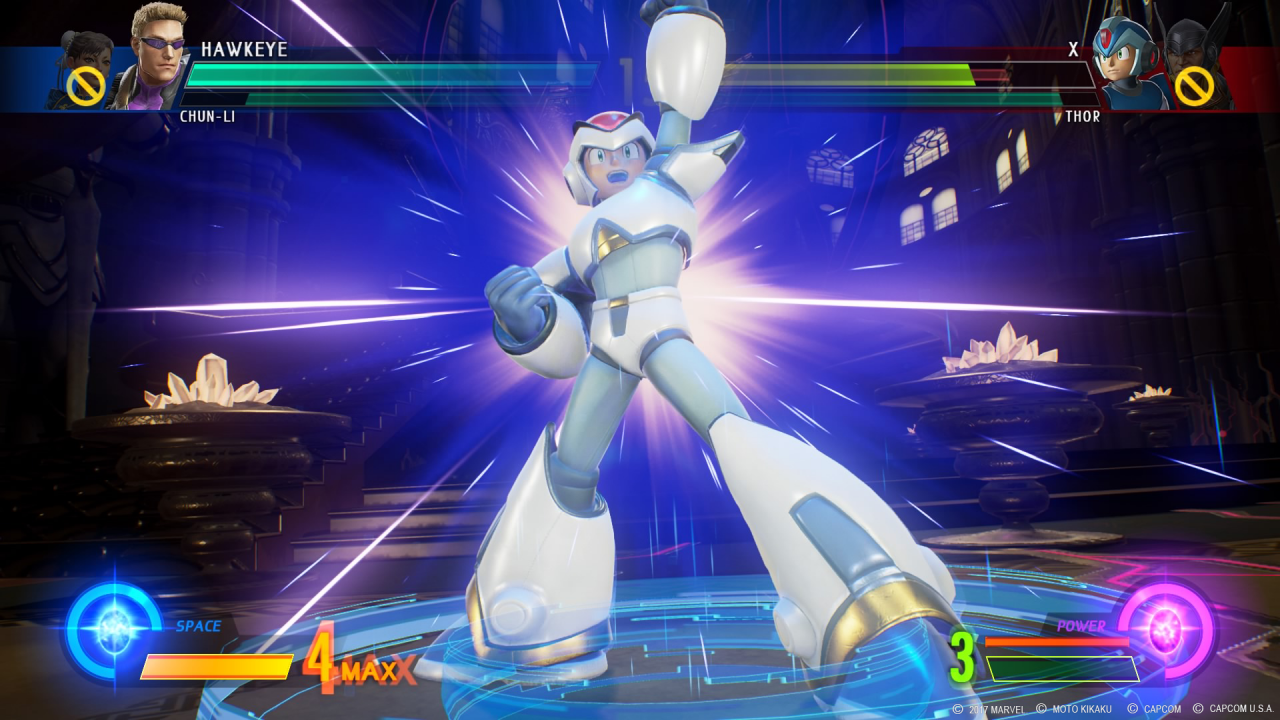 At least it seems like Capcom is willing to listen a bit to some of the fan concerns. The game represents the Mega Man franchise well with X and Zero, and the game looks better after fan feedback. Hopefully, Marvel vs. Capcom: Infinite can become more successful, as the gameplay deserves plenty of praise. Arcade Mode is also an option, something that fans are still waiting for in Street Fighter V. Unfortunately, the presentation takes a bit of a hit with the Arcade Mode, as there are no specific character endings like in previous titles. Maybe player feedback will help here and Capcom can add them at a later date just to appease the fans.

Other modes include online battle, mission mode, and training. Mission mode is a good way to acquaint oneself as it offers a pretty good tutorial. Aside from the tutorial missions, there are ten missions specific to each character as well. Using these missions will present advanced techniques to help master a character. Some of the combos offer a high challenge, and success requires a lot of practice. Training mode takes that a step further and offers full reign of experimenting with your combos. Training in fighting games is at a point where they have an industry standard, and Infinite is no different 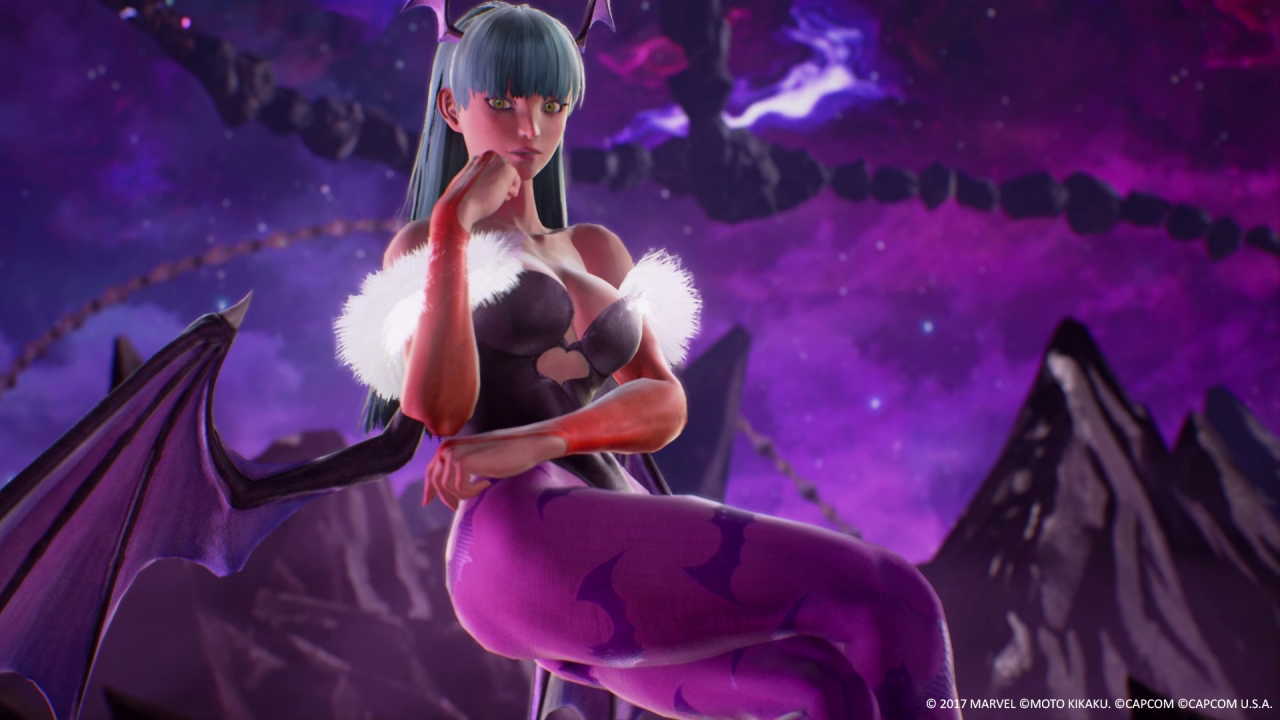 When played online, Marvel vs. Capcom: Infinite seems to work well. During my matches, I never ran into real lag, which is a bit surprising. My button inputs didn’t seem to have a delay either, though this is due to me matching with people with good signals. Matchmaking in the ranking mode shows a few limits as of now. I’ve had moments where I’ve run into the same players in ranked matches repeatedly. This may change as more players adopt the game, but it was definitely interesting. Spectator mode is also available from the start for people that just want to watch matches for potential high level play. For more casual play, players can set up lobbies and play with multiple friends. While it’s pretty standard fare, at least it’s all there from start.

Marvel vs. Capcom: Infinite is overall a fun fighter. The action is non-stop and the combat encourages experimenting, especially with the Infinity Stones. The game has a lot of interesting ideas and hopefully Capcom can make it so fans will gain interest. Even though this isn’t Marvel vs. Capcom 4, fans should still hope that this series stays alive for potential future titles. Who knows, if given enough feedback, Capcom may even be able to cater to fan requests and bring back the X-Men. They may even touch up on the presentation a bit through patches, as they already have done with the game at launch. When all’s said and done, Marvel vs. Capcom: Infinite deserves a chance for fighting game fans to embrace it.