Racing games these days seem to scratch one of two itches: simulation, or kart racing. Series like Forza and Project Cars reach for realism, with tons of customizable car parts and unforgiving controls. If that’s not your speed, there’s always Mario Kart and the like: light customization, weapons, booby traps… It’s been a while since we’ve had a game that reached for a middle ground, which is why Milestone is creating Gravel. I took some time before PAX West to meet with Ryan from Square Enix; he told me about the game and gave me a chance to take it for a spin.

Gravel channels energy from racing games like Blur and Split/Second, but without the power-ups. Players race for the finish line in local multiplayer, online multiplayer, or single-player modes like Gravel TV, the game’s campaign. In addition to competing for first place, players also get points for their racing style: game difficulty, drifting, drafting, and catching air from ramps all add bonuses to your score. Points are used after the race to unlock new cars and paint jobs and ranking players on the online leaderboards. 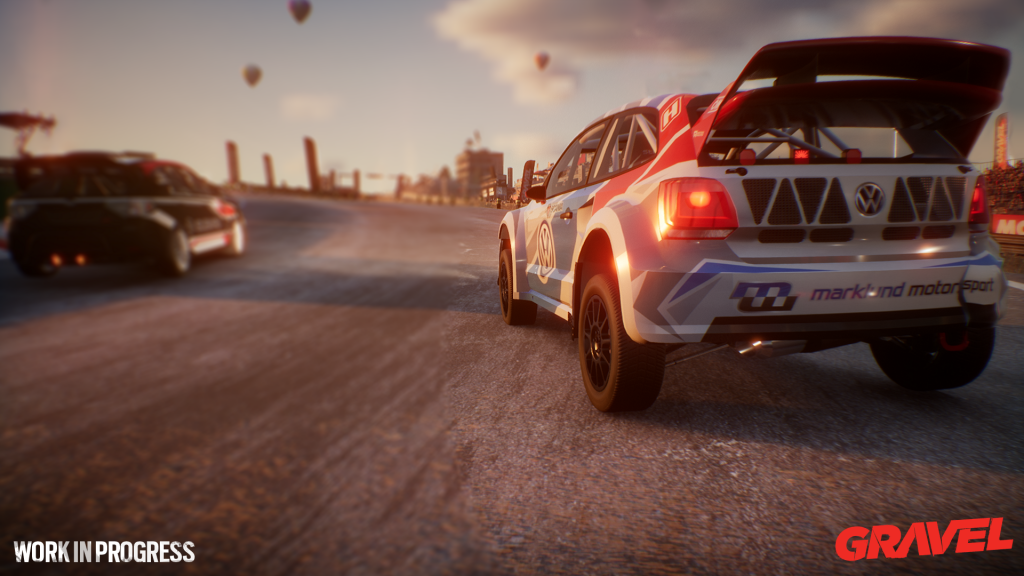 The game offers four different course types: Cross-Country, Wild Rush, Stadium Circuit, and Speed Cross. The first two types are start-to-finish races with no laps: Cross-Country is your more conventional rally car-type race path, while Wild Rush carves out a race track from real-world locations like a rock quarry. Stadium Circuit is a multi-lap stadium course with hills and dirt, while Speed Cross is a more conventional racetrack. I raced on all four of the track types in Free Race, using different cars and experimenting with some of the track settings on the way.

Milestone designed Gravel to be approachable, but there’s still depth for players to dive into. Different vehicles handle in different ways: rear-wheel drive trucks drift around turns constantly, while rally cars hug tight corners. Racing on dirt, gravel, and concrete all make cars react differently, and weather conditions change the game significantly. Combining the drifty Toyota-T100 truck with a muddy Alaskan Cross-Country track meant a lot of sliding around, and sometimes crashing into trees in the forest. This is where Gravel’s rewind function came into play: in single-player you can go back up to 10 seconds to avoid a bad wreck or just improve a maneuver. There didn’t seem to be any limit to how frequently I could rewind: the game seems to just focus on letting players have fun instead of enforcing struggle.

Though the game is still a work-in-progress, Gravel still looked good graphically as well. The canyon I raced in for Wild Rush felt natural, with dirt flying up as I skidded around turns. I particularly enjoyed the game’s lighting effects; racing the Speed Cross track at sunset meant that the sun blocked my vision during parts of the course. Instead of just painting a nice gradient in the sky while I raced, sunset actually slowed me down and forced me to rely on my map. The audio held up as well: a rock/metal-oriented soundtrack kept the energy high, and sound effects were crisp. 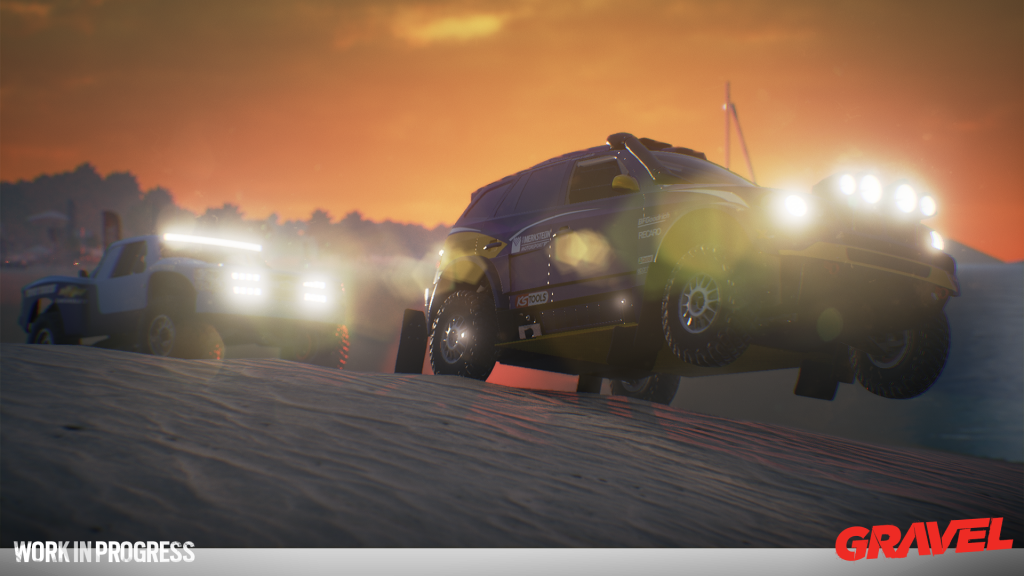 At release, the game’s slated to have 65 tracks in 16 locations, 70+ cars, multiple gameplay modes, and plans for DLC to keep things fresh. Some game modes try to add a fresh take on racing titles as well, like Gravel TV and Smash-Up. In Gravel TV, racers compete against rivals in a simulated TV show, while Smash-Up gives a limited time to break as many items as possible. In multiplayer, there’s a King-of-the-Hill mode where players race to grab a crown, then avoid other players for as long as possible. There’ll be plenty to do to keep players engaged when the game comes out.

Even as an amateur racer, I enjoyed the time I spent with Gravel. With strong mechanics, fun gameplay, and appealing graphics, I could see it roping in newcomers. Though there are both high-arcade and high-simulation racing fanatics here in the US, I hope there’s a place for titles in the middle like Gravel.