Review | Guardians of the Galaxy: The Telltale Series – Episode 3: More Than A Feeling

It’s been over two months since we last saw the Guardians of the Galaxy in Telltale’s thrilling new adventure, but after a brief hiatus, they’re finally back. Telltale has had their hands full, what with a new Batman game releasing and two long awaited sequels coming next year. It’s easy to think they may have been distracted from Marvel’s lovable misfits, though this episode coincides with the home video release of Guardians of the Galaxy: Vol. 2. It’s safe to assume this was a way to promote the franchise as a whole, though that may seem to be more apparent now more than ever. Guardians of the Galaxy: The Telltale Series‘ third episode, More Than A Feeling, makes the game feel more like an advertisement for the movie at this point. Readers take caution, as there will be minor spoilers in this review. 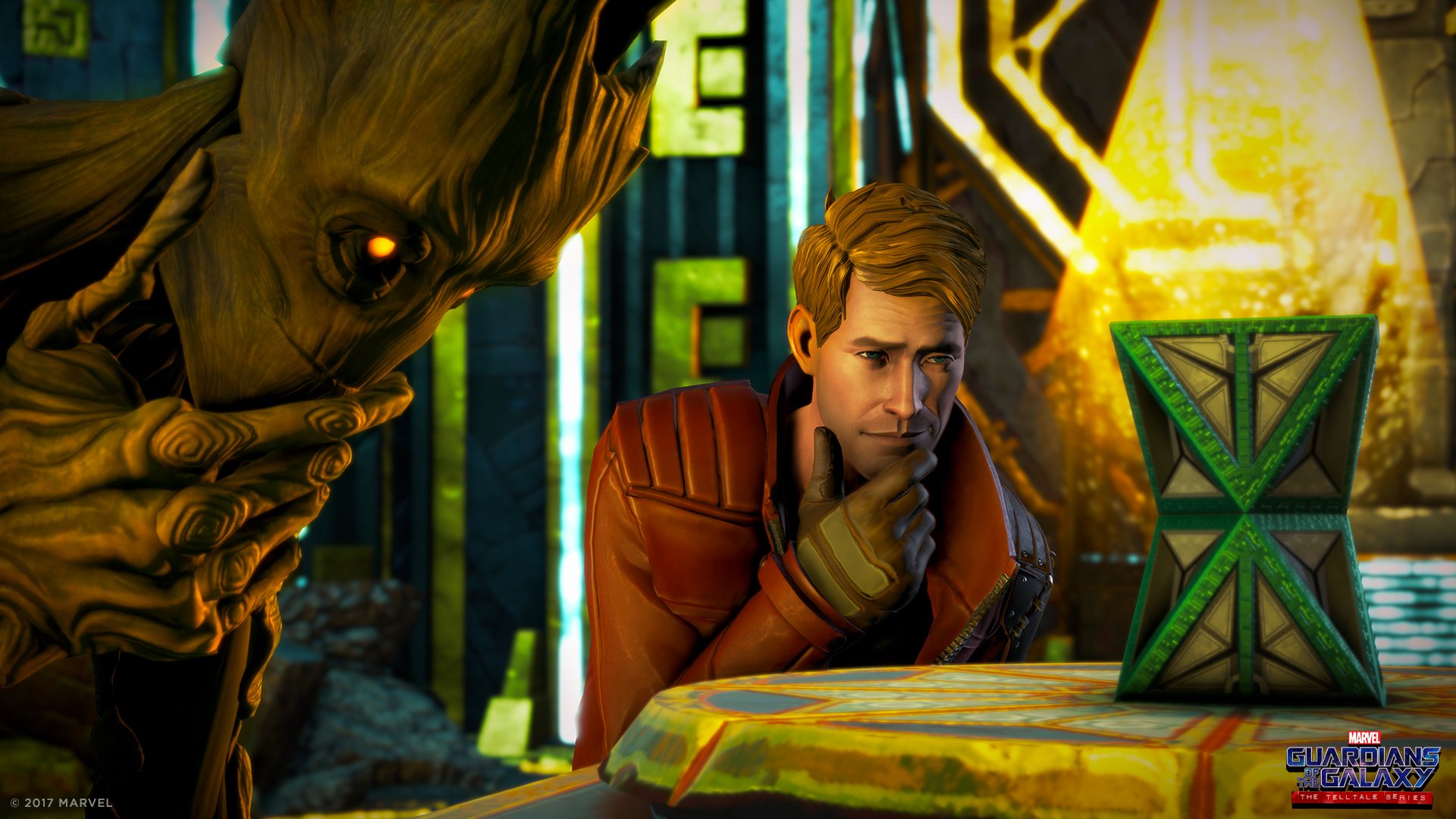 It was pretty clear from the start that this game took a lot of inspiration from the film series, but fans are used to Telltale Games taking liberties with the source material. While they do it to a degree in this series, the introduction of another character, Mantis, while welcome, brings it even closer to the films than ever before. While the plot may be vastly different, the dynamics and choices of characters are starting to feel less and less original with each passing episode. This isn’t to say that More Than A Feeling is a bad episode, as it’s actually very eventful, and even contains perhaps the biggest choice of the game, but more on that later.

Taking its name from a 1976 Boston song, More Than A Feeling delivers plenty of feelings and then some, making the title pretty fitting. We get an interesting flashback with Peter and his mother in the beginning, further fleshing out her character and making her a notable inclusion to the exposition of Peter’s story. This flashback approach worked well for The Walking Dead: The Telltale Series – A New Frontier, though it feels like the exploration of the relationship between the two characters is starting to wear thin. There might be enough left in the tank for one more, and with the way the story is developing, hopefully it ends up being the case. This isn’t to say all the flashbacks are a problem though. 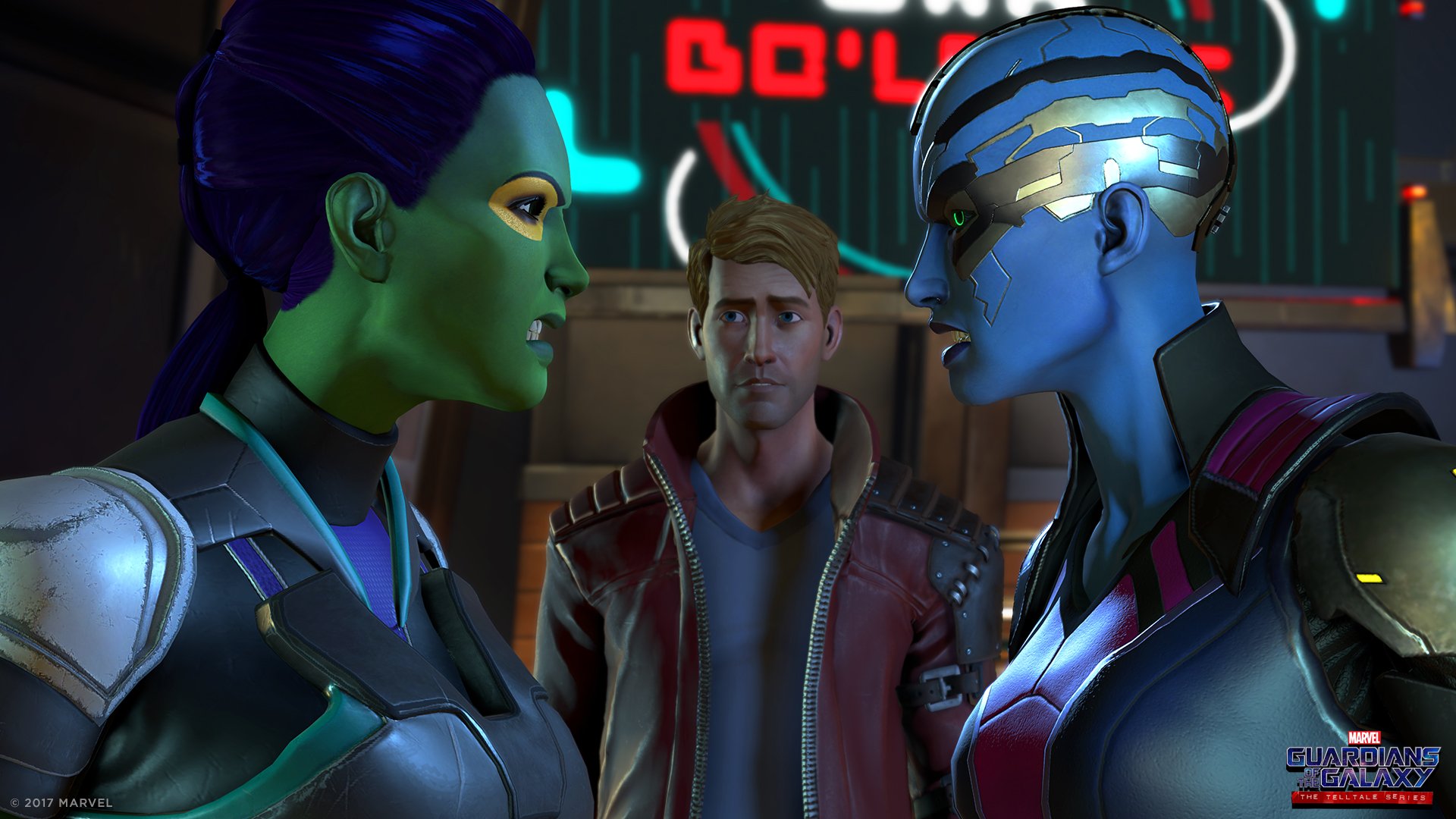 As each episode focuses on a member of the team, this one focuses more on the relationship between Gamora and Nebula. Flashing back to a time when the two “sisters” served under Thanos, it was actually nice to explore this moment with them. Nebula is a character that is often misunderstood, seeming like a villain in a lot of aspects, but she really isn’t at fault for the majority of her actions. This becomes very clear in the episode, though that isn’t to say she’s completely innocent. It was nice to see more of what drives Gamora too, as she probably deals with the most conflict in this series. The concept of using each episode to explore the past of a different member of the team is still very welcome, and it makes me really look forward to the fifth episode, which is strongly hinting to be a big episode for Groot.

The action in this episode was a step up from episode two, giving Gamora and Nebula plenty of spotlight, but also for the other members of the team. Even Mantis has her moment to shine, though granted a lot of the “feeling” in More Than A Feeling comes from her as well. Mantis is on full display with her empath abilities, and the performance by Sumalee Montano really helps to sell the character for the game series. Despite this, sometimes some of the character interactions with her come off a bit awkward. There is one particular moment with Star-Lord that felt incredibly forced, as it came completely out of nowhere. Granted, there is a chance that a player will completely miss that moment, but most people would likely pick the awkward option. 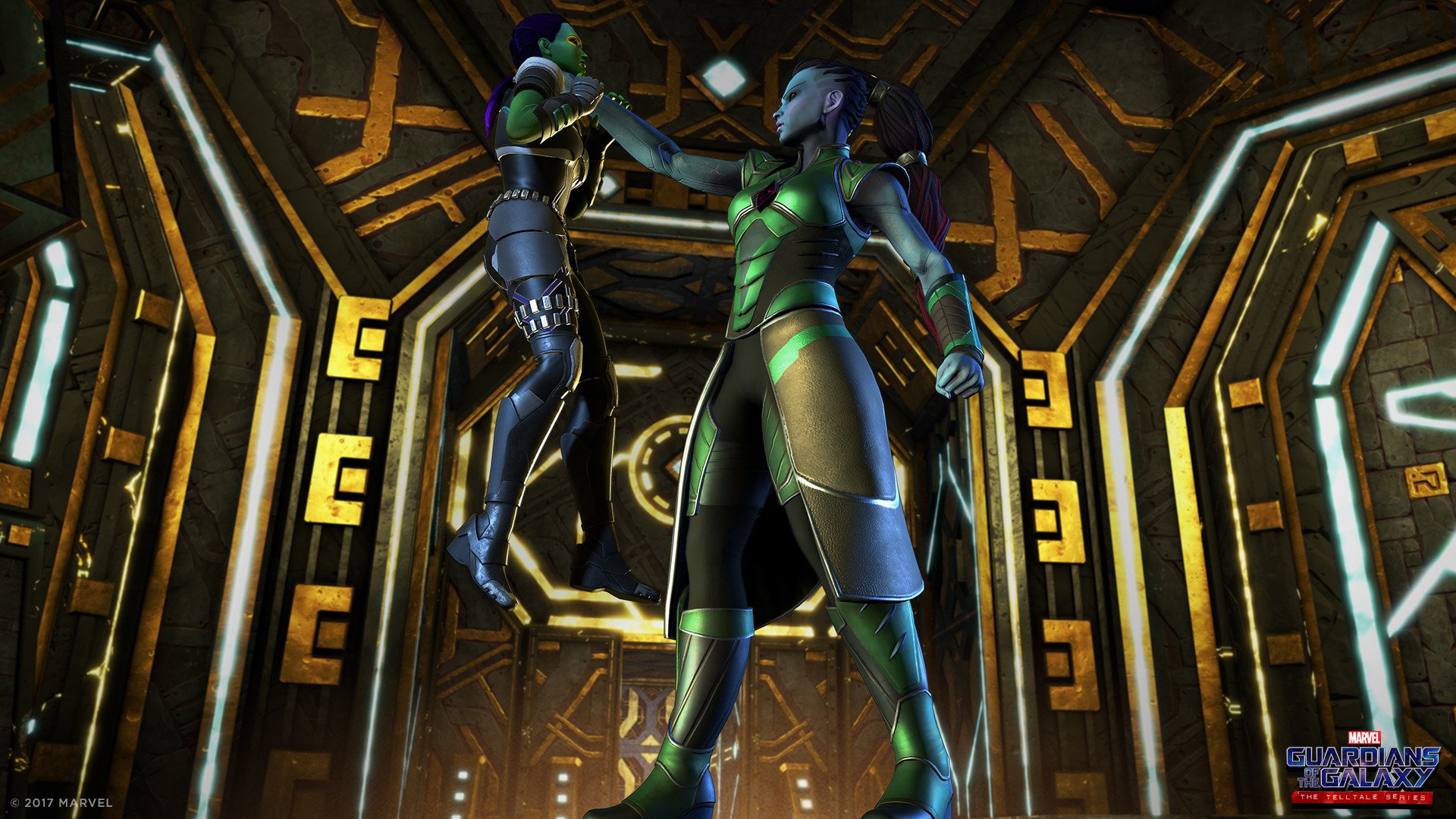 More Than A Feeling’s humor was among the best in the series so far, including a certain email from Drax that deserves to be read. Even a joke from Rocket that pokes fun at one of the games weaker elements: exploring temples. There has been at least one temple to investigate in each episode so far, and though this episode has the most entertaining one, it is starting to get repetitive. The midpoint of the season is starting to make some of these moments more apparent, so hopefully they tone it down for the final two episodes. At the very least maintain the level of entertainment that this episode had to keep it from being too dull.

Pacing is starting to change a bit too, as players will likely notice this right away when they see how quickly they get their first achievement in this episode. The story moves at a breakneck pace until about halfway through when it starts to slow down. The latter half of the episode makes it maintain the length of a typical episode, but the beginning half gives off a sort of rushed feeling that makes one think it will be a short episode. There is one moment in particular though that deserves some praise: a fun montage set to Three Dog Night’s “Shambala”, making it feel like a scene from the film series. It was fun, entertaining, and it worked so well with the silliness we expect from these quirky characters. 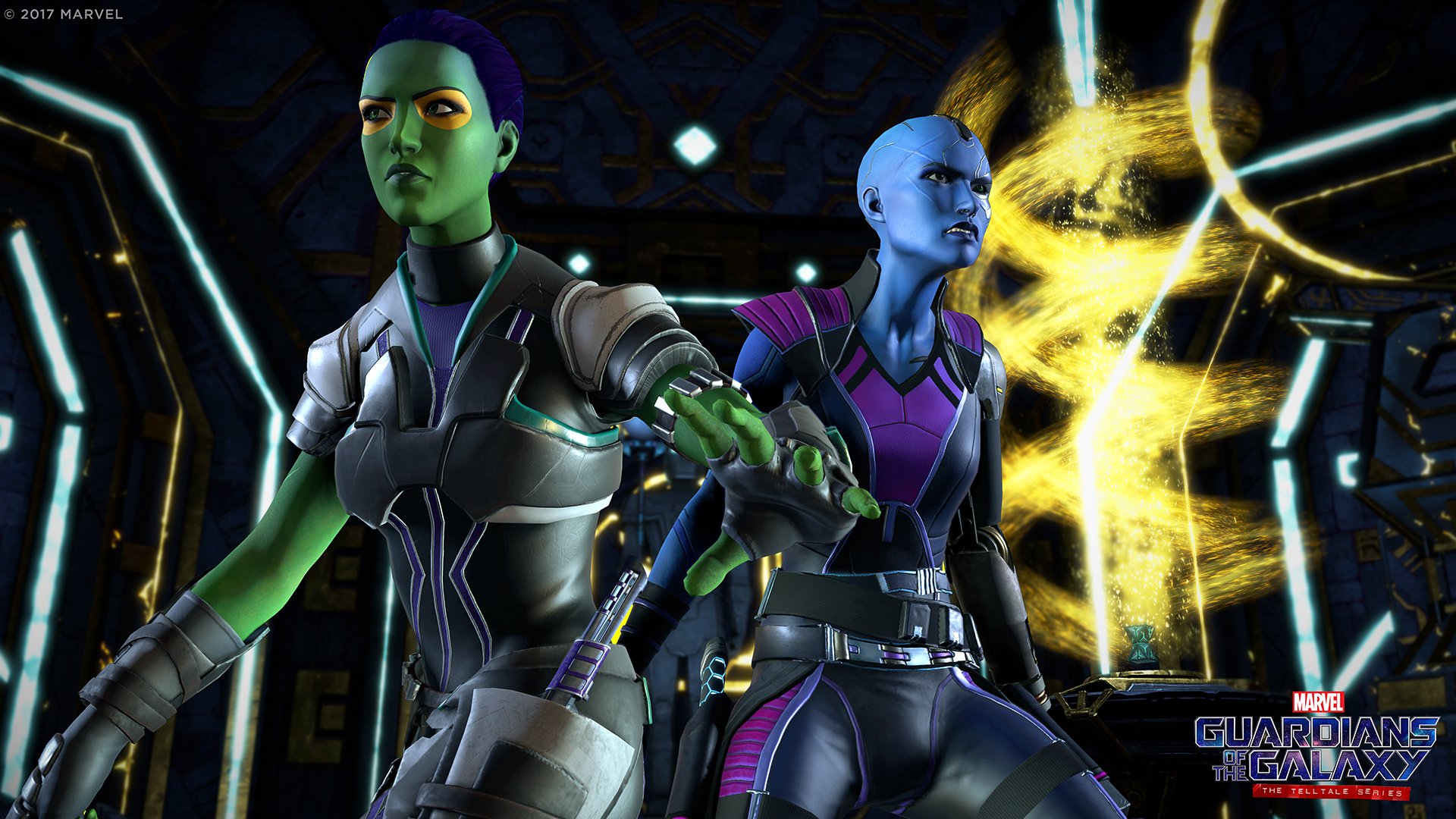 Getting back to the big choice, More Than A Feeling has a heavy choice that may impact the remaining episodes. It’s hard to say if it will or not, given Telltale’s tendency to have inconsequential choices from time to time that just feel like big decisions. It’s entirely possible that the game will continue almost the same way regardless of what the player chooses. Despite that, there are still other choices that could be made that will determine how the team comes together. The story sort of pushes players into the moral decisions, but the player still has the choice to do what they desire, at least most of the time.

More Than A Feeling may start to show more flaws in the series, but it still has a strong enough impact on the series and it explores new territory for the characters. Some of the most fun moments play out in the episode and while it may not have the best pacing, it still manages to be enjoyable. The game still takes a few too many cues from the films, but hopefully they can make it work. With only two episodes left of the season, the only thing one can hope for is a consistent balance across the remaining episodes. The one thing I’m personally hoping for is an appearance from Howard the Duck, who has been heavily teased in each episode. Guardians of the Galaxy: The Telltale Series – Episode 3 works great as the halfway point of the season, and I look forward to seeing the way this story concludes.