Nintendo has had a pretty solid stable of games released for their popular Nintendo Switch console. The Legend of Zelda: Breath of the Wild, Mario Kart 8 Deluxe, Arms, among others have released in the past five months to make the Switch a pretty notable console for first party software. Even Snipperclips, an eShop exclusive, has continued to sell well for a new IP from Nintendo. Sadly, it makes their newest eShop release, Flip Wars, all the more disappointing. To be fair, Flip Wars isn’t exactly a bad game, after all, it has a very specific purpose. Unfortunately that probably won’t be enough to make it a mainstay for Switch owners, even at ten dollars. 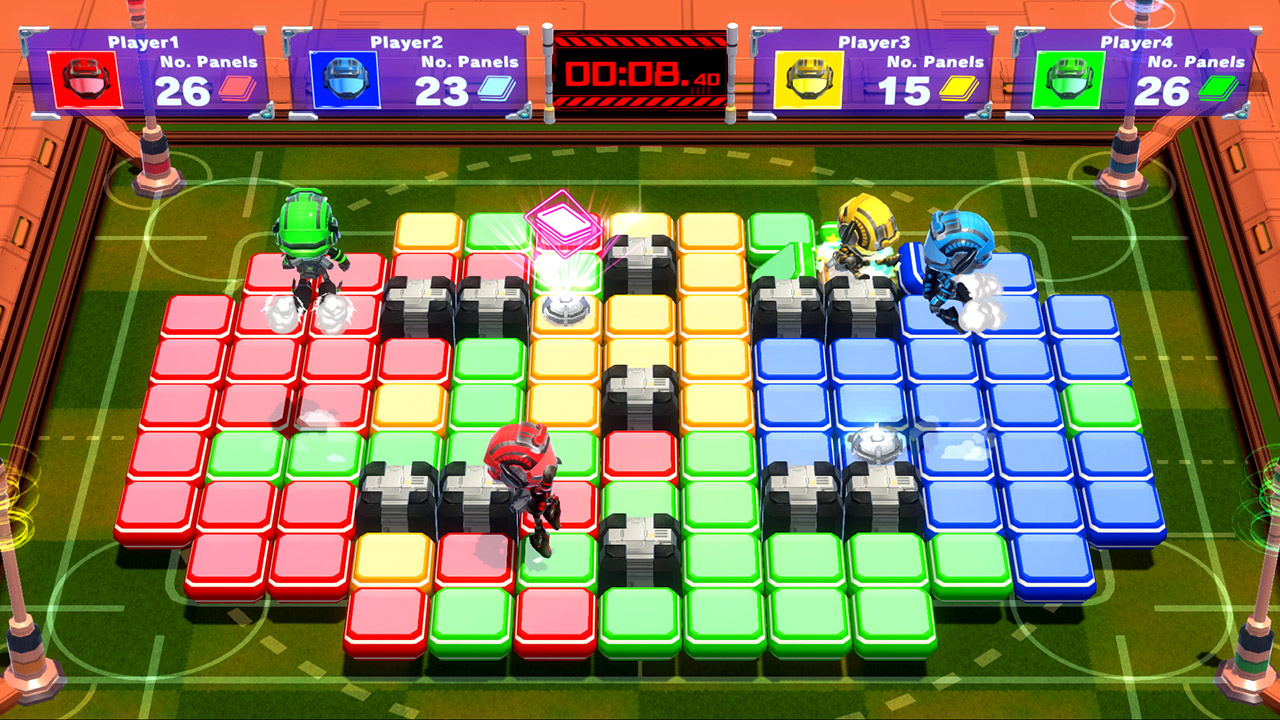 Flip Wars, developed by Over Fence, started out as Project Mekuru, and though it didn’t have a lot of details at the time, people were nonetheless curious about it. It was meant to be a competitive party game for up to four players, giving multiple modes and stages to battle on. It even had Mii support to add a little personal flair to the game. For some reason or another, Mii support has been dropped from the final product, making the playable avatars all pretty generic. It would’ve been nice to see a replacement character creator or unlockable costumes, but unfortunately players have to settle with red, blue, yellow or green.

Flip Wars, at it’s core, is a pretty simple concept. Up to four players run around a stage made of tiles, and they jump and “hip drop” to flip tiles to match their color, usually in the shape of a cross. Some flipped tiles will uncover hidden items that will power up your character, and flipping tiles with an opponent on them will knock them out of the stage. It feels like a mash-up of an early Mario Party mini-game and Bomberman, which works to make the game competitive, but not much else. The problem with Flip Wars is it ultimately lacks depth in almost every aspect. 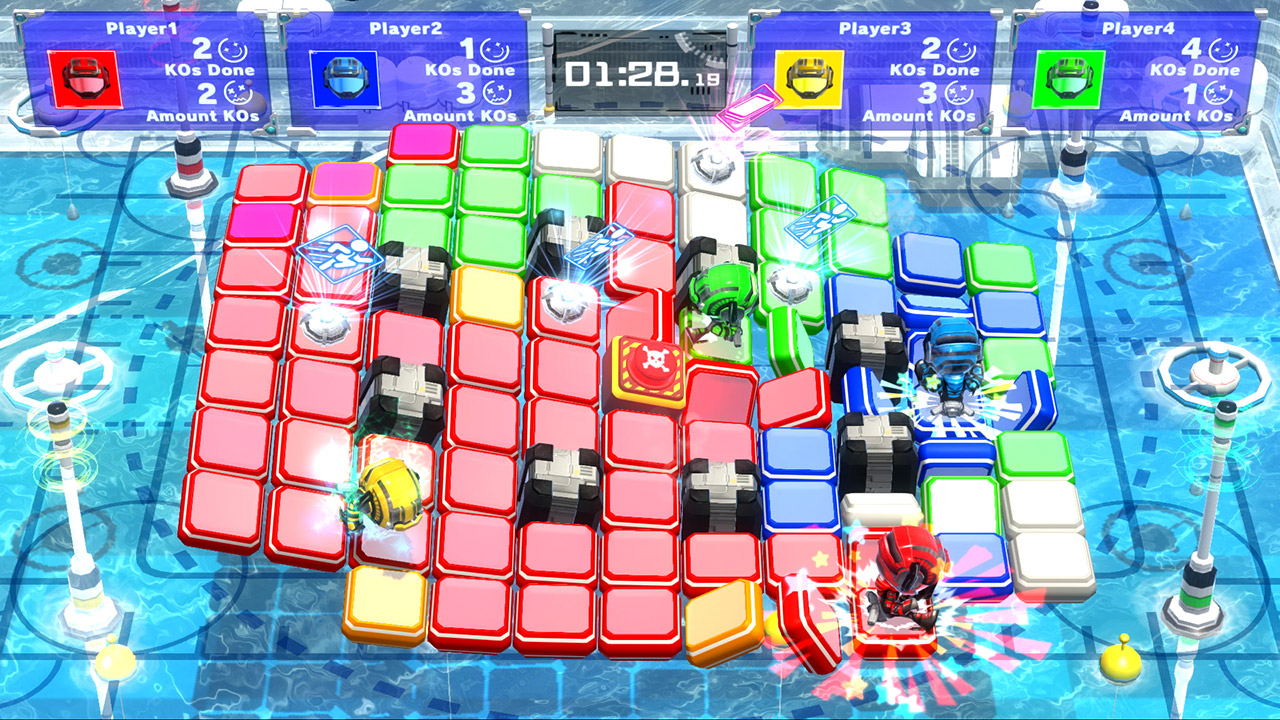 The idea of hip dropping tiles and flipping them seemingly doesn’t go very far, but that doesn’t excuse the lack of content. Players can play locally or online across three modes that ultimately feel the same, only changing the end goal. Panel Battle has up to four players competing to flip the most panels to their color before time runs out. Knock Out, as the name implies, encourages everyone to knock out the most players by flipping panels before running out of time. Life Battle, like Knock Out, is a similar experience, except players are given lives, meaning the last player standing wins. There could have easily been more creative modes, or even mechanics that make their way into even the simplest of Bomberman titles, but it’s what it is.

All three modes can be played across twelve stages, which offer most of the depth of the game. Green stages offer a pretty standard battlefield, while blue stages have rolling waves to stun players on the ground. Lastly, yellow stages have lighting strikes that can knock out players if they aren’t careful. All stage types have four categories: normal, electric shock, beam cannon, and expert. Electric shock, despite the name, involves a switch in the middle that when flipped, creates a large area of the player’s color in the middle of the stage. Beam cannon has a device in the middle of the stage that rotates, and when flipped by a player, the player’s color will spread in the direction it points in. Normal and expert stages are more or less the same, with expert offering more roadblocks to get in the way of flipping tiles. 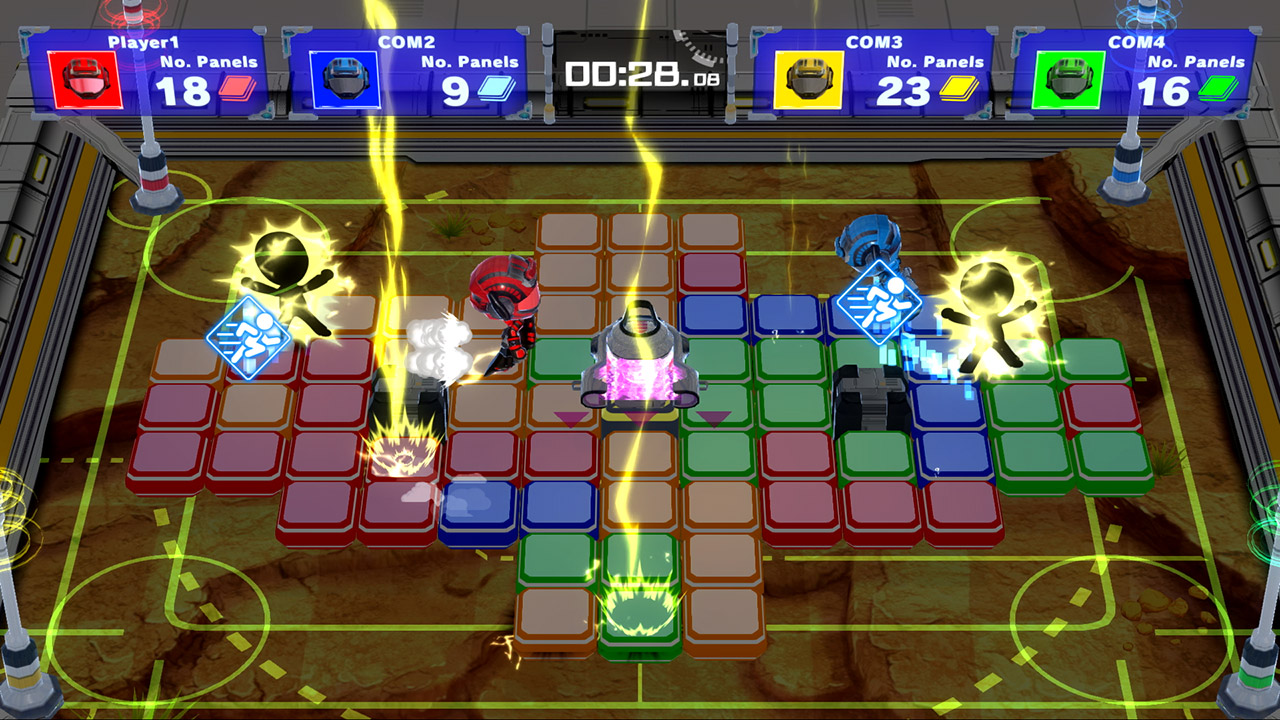 Getting to the gameplay, the controls are fairly simple. Players can jump, and press the jump button again to perform a hip drop. If they hold a direction during the jump, they’ll slide one panel over, allowing them to mix up their drop. If the player hits the B button during the jump (without sliding), they will cancel it and drop back down quickly. Players will be able to move faster when walking over panels of their color, and picking up speed boost power-ups will increase that speed even more. Other power-ups can make tiles flip in an X shape, increase the range of the tile flips, and even an ultimate invincibility power-up that allows players to run faster, flip more panels, and even withstand an attack or two. Despite the simple gameplay, there is a noticeable amount of input delay from time to time, which can make the precision of movement and flipping panels much more difficult.

Playing online is a mixed bag, as it makes it clear this game was intended for local play. The game doesn’t seem to have too many players, as one would be lucky to get matched up with more than one person. Of the dozens of online matches I’ve played, I’ve only had one four player match, the majority being two players and a few three player matches. Granted, this is at no fault to the developers, as they can’t force people to play online, but for those expecting a fun online experience, this game will likely not be for you. At the very least, online runs pretty well most of the time, with minor moments of lag here and there. The game ranks players from online battles, earning points for their wins to raise their ranks. It’s mostly for bragging rights, but one likely wouldn’t care too much about being the top ranked player for Flip Wars. 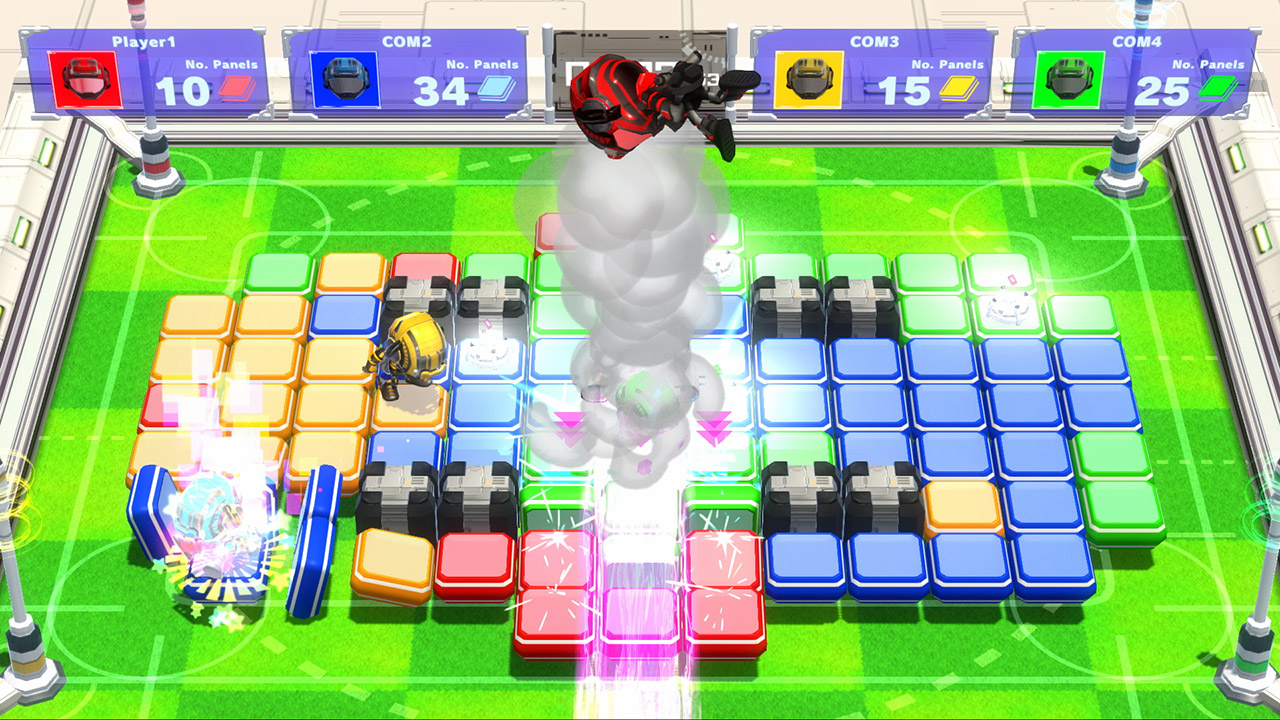 The presentation of Flip Wars, like the rest of the game, is pretty simple. The menu interface is rather easy to navigate, though it would’ve been nice to have all online features in one section. Players shouldn’t have to disconnect and reconnect to the internet to check their ranking after having just finished playing an online match. Graphics don’t take advantage of the Switch hardware, as it looks more like Metroid Prime: Federation Force on the 3DS, granted, the gameplay doesn’t really call for better graphics. Music in battles is fun and energetic, though the music that plays when waiting for a match is one of the most irritating and repetitive songs they could’ve used. Players can earn achievements in “My Room”, but it’s little more than a scoreboard and less of a room that gets decorated with your accomplishments.

As said before, Flip Wars has one specific purpose. It invites friends to get together and play a simple yet competitive game. The competitive type of person may really enjoy it and might find a lot of value in the game for parties. Similar to 1-2 Switch, Flip Wars is a game intended to play within social gatherings. Even though it may lack charm and depth, the game is still pretty fun, even if for a few minutes here and there. Ten dollars might not be an ideal price for something so simplistic, but that simplicity makes it accessible to players of all types. The fact that the Switch is so portable does make it the perfect platform for a game like this, even if there are likely better options to play.