Square Enix’s release of Kingdom Hearts in 2002 instantly captivated an audience. Mashing up Disney and Final Fantasy characters, the franchise’s fame grows with every new game, manga, and anime. Now, while waiting for Kingdom Hearts III, there’s a new experience for fans to share: Kingdom Hearts Orchestra World Tour. The 2+ hour performance showcases pieces from across the Kingdom Hearts universe, complete with a full orchestra, choir, and plenty of gorgeous visuals from the series. GotGame was invited to see their performance in New York City at the United Palace on Saturday night. Though I’m only slightly familiar with the franchise, I checked out the show and left impressed and wanting to dig deeper into the world of Kingdom Hearts.

A show for fans and newcomers alike

I’ve attended other video game-themed concerts, from the raucous, electric guitar-fueled “Video Games Live!” to the smaller “A New World: intimate music from FINAL FANTASY.” KHO World Tour is more akin to “Legend of Zelda: Symphony of the Goddesses,” putting reliving the game first. A huge, high-definition screen hung above the orchestra, shows mash-ups of cutscenes to go along with the melodies. These borrowed from all over the franchise: Kingdom Hearts and Kingdom Hearts II, as well as the many spin-off titles.

Many attendees were franchise devotees, wearing cosplay outfits and cheering when their favorite characters emerged on-screen. I recognized some of the tracks from early in Kingdom Hearts I, notably the opening piece’s energetic variation on “Simple and Clean.” The song is the theme to the original Kingdom Hearts and arguably the series’ most popular track. Though many of the concert’s later compositions were foreign to me, I found myself more attached as the music moved forward. 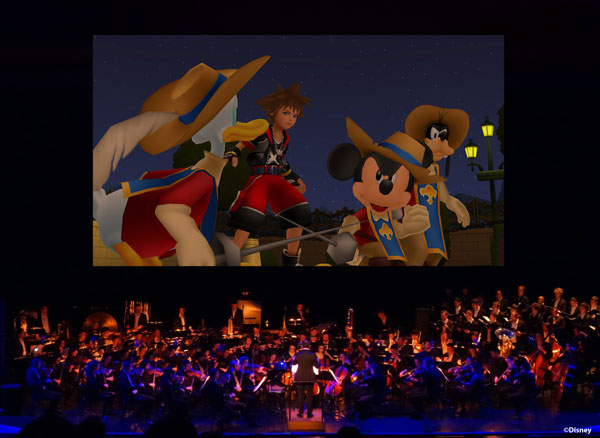 The heart of the Kingdom Hearts Orchestra World Tour is Yoko Shimomura’s elegant compositions, weaving many game themes into immersive medleys. When she arrived on stage, the audience instantly met her with thunderous cheers and applause, kicking off the night with high energy. She made an initial greeting in English, then spoke through a translator to thank the fans for their support. The show traveled through high moods and low ones, energetic battle themes and wistful recollections of the past. I expected, having only played parts of the original KH, to lose connection with the scenes and just listen to the music. Instead, the well-edited cutscenes amplified the energies of each piece, even without me knowing the game’s backstory.

Kingdom Hearts Orchestra World Tour’s big draw comes from making game experiences larger-than-life. Like seeing movies in theatres, there’s a special joy seeing video games on a huge screen. Videos for early pieces like “The World of KINGDOM HEARTS” and “Destati” served primarily as vehicles for character cameos. Sora, Roxas, Kairi, Riku, Aqua and more appeared, each new character on screen pulling a cheer from fans. Final Fantasy staples like Cloud Strife and Tifa Lockhart showed, and Disney characters like Hercules, Mulan, and Mickey Mouse himself. The concert’s highpoint came after the fan service though, digging into the emotional content that fans praise the series for.

Perhaps the most moving part of the show came with a trilogy of scenes: “Lazy Memories: At Dusk I Will Think of You,” “Vector to the Heavens,” and “Wave of Darkness.”  These songs travel through the friendship and conflict of Roxas, Axel, and Aqua, members of Order XIII. Even without a deep knowledge of these characters, watching the friendship and rivalry of these three ebb and flow simply worked, even with no words. Haunting solos played by oboe, clarinet, and violin carried me through the happiness, despair, anger, and agony of their story arc. Though there were spoilers in the videos, I left with a stronger desire to play the games than before.

That said, even those with no Kingdom Hearts background at all can still find pleasure in the concert. I brought my uncle, a veteran and former music teacher to the show; he’s never played any Kingdom Hearts and knew nothing about the franchise. Though the cutscenes didn’t do much for him, he loved the music itself and the performance. He also particularly enjoyed the clarinet and oboe soloists, and saw ties between the structure of the composition and Mozart. Though I wouldn’t have made those connections myself, the composer and the performers’ mastery of their crafts shone through.

The orchestra serves the fans and beyond

Though there seemed to be minor frame rate drops in the video a couple times, the orchestra sounded flawless. Sometimes I forgot about the live performers; coincidentally, just then the screen faded to black, focusing attention on the orchestra. These moments were brief and infrequent; the game took center stage above all. Still, this gave the Kingdom Hearts Orchestra some spotlight, and the audience a chance to enjoy the pure music.

Aside from being a great orchestra concert, it’s the orchestra’s fan service that stands out. Shimomura’s continuous praise and thanking the audience felt genuine. She even played the piano for “Fantasia Alla Marcia,” which served as the concert’s end-credits. The conductor even wielded a special Keyblade baton for the piece, a bit of product placement considering they were for sale at the show, but the audience loved it. Some artists talk about compromising art quality to please audience; concerts like this show that’s not necessary.

Overall, the Kingdom Hearts Orchestra World Tour is the kind of show fans long for. Breathing new life into the franchise with special arrangements, they still paid respect to the audience and the franchise’s history. The Kingdom Hearts Orchestra World Tour only has one performance left, a nearly sold-out in Tokyo, but this premier run shows yet another way that gaming can transcend the controller.