Nintendo is always a fun place to check out during E3, whether it be to see their fantastic displays, or to see the awesome games they have to showcase. Last year, they went all in with The Legend of Zelda: Breath of the Wild, but this year, they had a bit of a different strategy. While the whole booth went with a Super Mario Odyssey theme, they still had other games to play at their booth. Either way, it was clear the game they wanted to wow the attendees with was Mario. 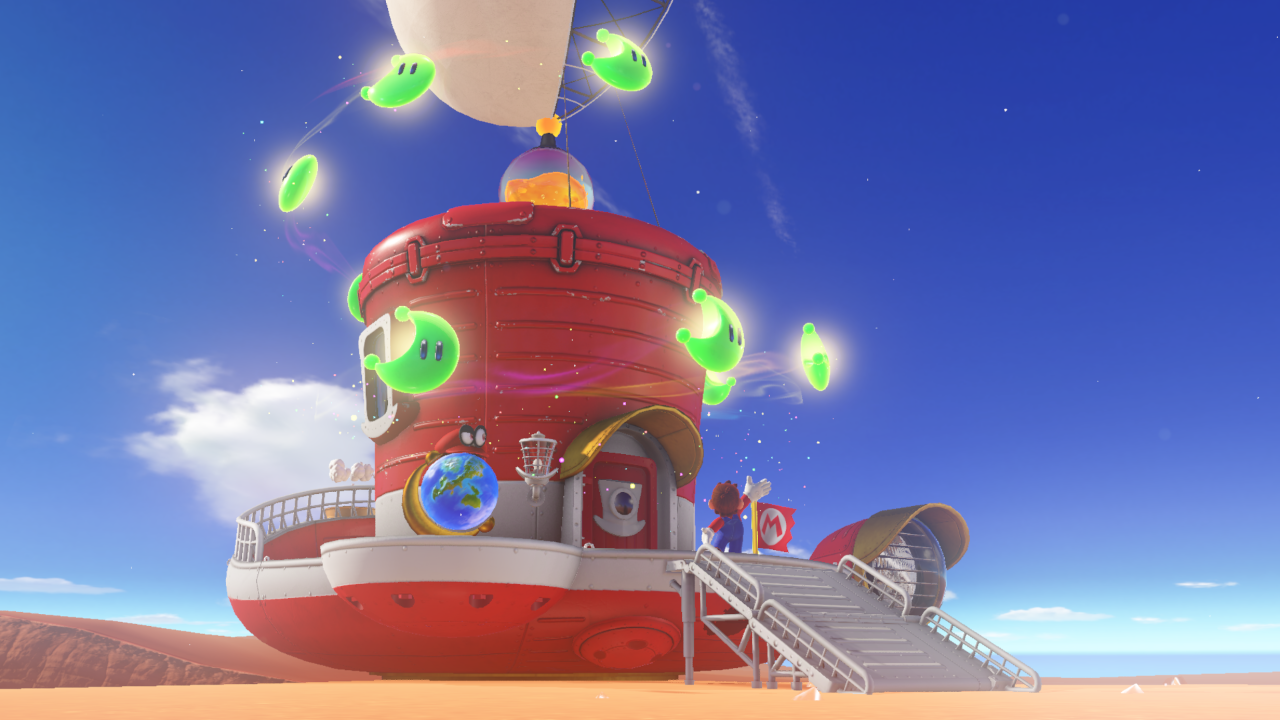 Super Mario Odyssey had a short ten minute demo with two levels to choose from. For our demo, we went with the Metro Kingdom, taking a stroll through New Donk City. Super Mario Odyssey returns to a lot of the 3D Mario roots, making it more like Super Mario 64 and Super Mario Sunshine. Mario controls with amazing precision that you come to expect from the 3D Mario titles and it works surprisingly well with the joy-cons (though a pro controller would likely be preferred). With a true return to form for a 3D Mario title, it means a lot of returning abilities too.

Mario can do his popular triple jump (which was absent from Super Mario 3D World), gaining height and distance with timed jumping. The ground pound and long jump make returns as well, as they’re practically staples for 3D Mario games, especially for speed-runs. The spin jump also makes a welcome return, as it was a nice demonstration of just how tight the controls could feel. Backflips, somersaults, wall jumps and more, it seems like Mario has his whole repertoire of moves for his trek to new worlds. 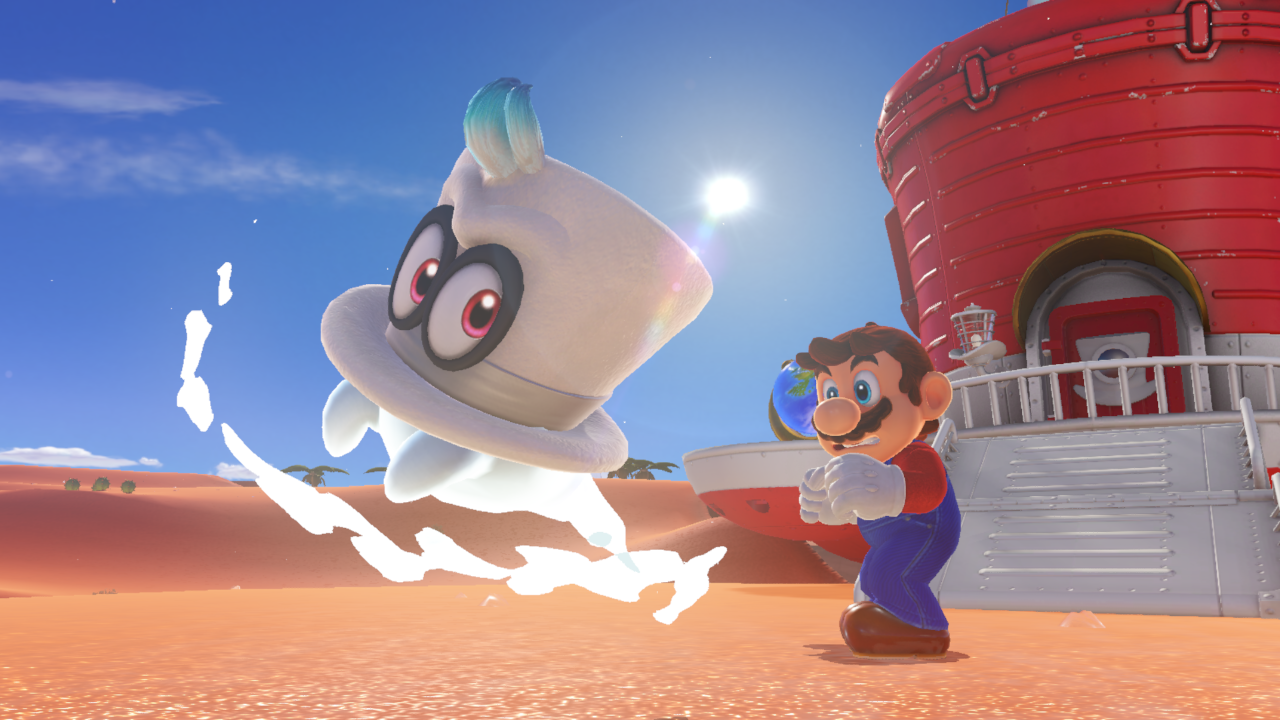 That isn’t to say there aren’t new abilities too. Mario has all sorts of new jumps as well as a rolling move that allows him to move quickly. Mario is also given a new companion in the form of Cappy, a spirit that seems to be able to “capture” objects and creatures, like Mario’s hat for instance. This is why Mario’s hat has eyes in the game, and the hat has become an awesome new mechanic in more ways than one. Not only does Cappy work as a fantastic melee attack (replacing the spin attack from Super Mario Galaxy), but it also helps to collect items from a distance.

Cappy can also be sustained in a position for a brief period of time after being thrown, allowing for Mario to use it as a temporary platform, similar to Cloud Mario from Super Mario Galaxy 2. Last but not least, Cappy allows players to capture other objects or characters. When used, players will throw the infamous Mario hat (and mustache) onto unsuspecting individuals, allowing various actions. Unfortunately in my demo, the only things I could find to capture were a rocket ship and electric coils, not getting a chance to control any living creatures (though they were there). 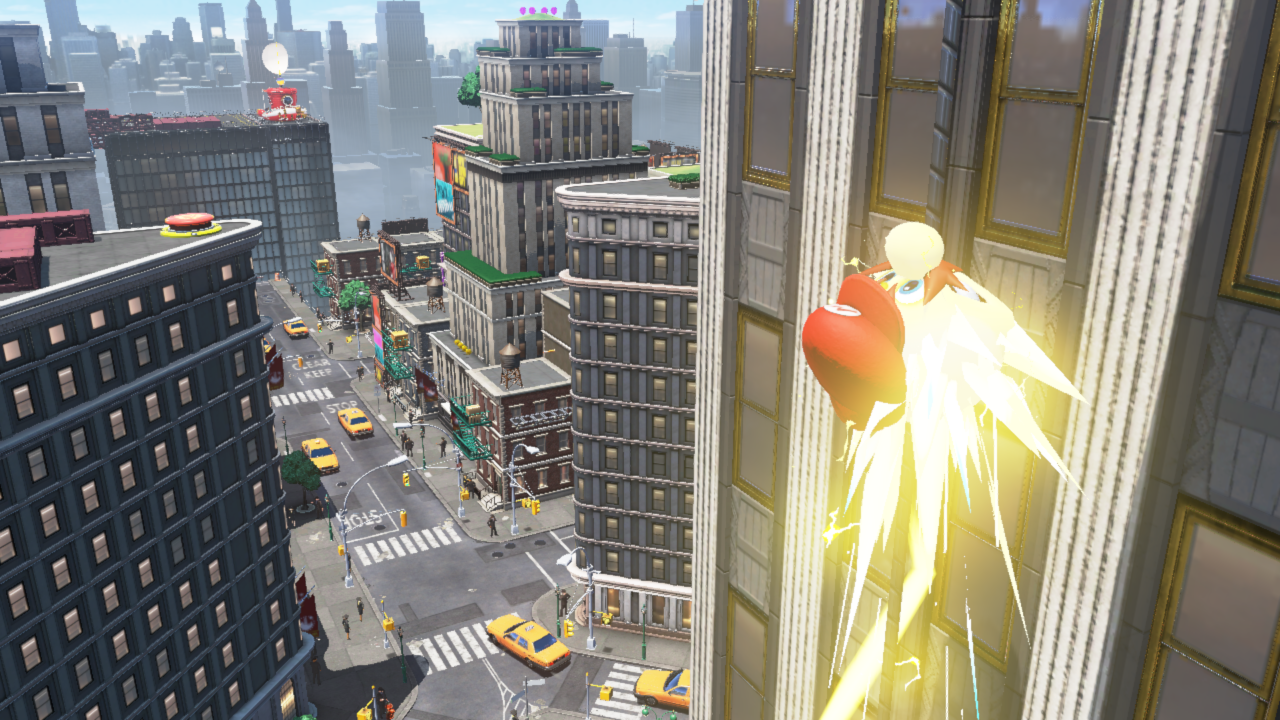 Getting back to the level, the Metro Kingdom seemed very similar in size to a larger Super Mario Sunshine stage. There was a great sense of verticality as buildings were tall, with rooftops and skyscrapers to explore. The main area was more like a hub, with a shop to buy new outfits and other collectibles, with no enemies in sight. There are NPCs all around with missions that would reward Mario with a moon, which replaces shine sprites and stars. One of those NPCs would be an iconic yet often forgotten character in the form of Pauline, the original damsel in distress from Donkey Kong. She is now mayor of New Donk City, and she requests you help her find musicians for a band.

In the ten minutes I had to explore, I discovered several secrets, including hidden areas that had more challenging platforming segments, as well as actual enemies like Bullet Bills. Purple coins (unique to each level) were scattered across the cityscape, and there were even hidden moons rewarded for taking alternate paths. Even though I didn’t play for very long, I managed to claim seven moons, and I could tell there were still tons more to find. The pacing of the game seems to take cues from the more recent Mario Party titles with mini stars, granting more in less time. It can also feel similar to Breath of the Wild’s hidden Korok seeds, encouraging players to check every nook and cranny for a hidden moon. This approach works really well and makes the game feel incredibly fresh. 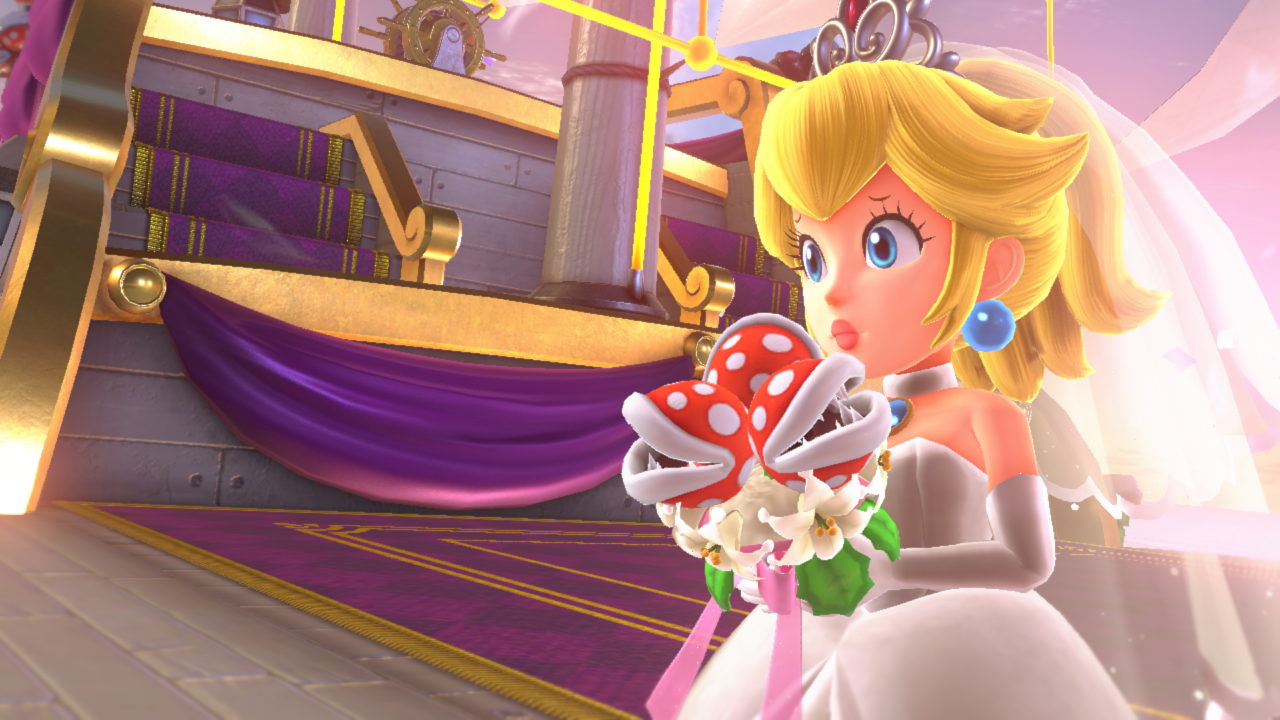 One thing to note is certain moons can feel a little obstructive with the pacing. Finding a musician for example sends the player right back to a music hall where Pauline is (albeit listening to an awesome rendition of the Super Mario Bros. Overworld Theme). This can break the flow of collecting moons if you go to an area that has multiple moons and suddenly you’re brought back to another area entirely. This might not be an issue for someone that prioritizes, but it really made it more obvious for the timed demo. Luckily, it only effects certain moons.

One hidden area involved climbing moving poles while avoiding Bullet Bills, collecting coins and getting to the moon at the end. Another one involved capturing a rocket ship and blasting off to an area where there were poles to swing from. Swinging off the poles allowed Mario to go through hoops and collect coins. The platforming got significantly harder as it got closer to the end of the area, as poles were rotating on gears and requiring better timing. Even these little stages offer hidden moons for going off the main path, and it makes a Mario game feel even more rewarding than ever. 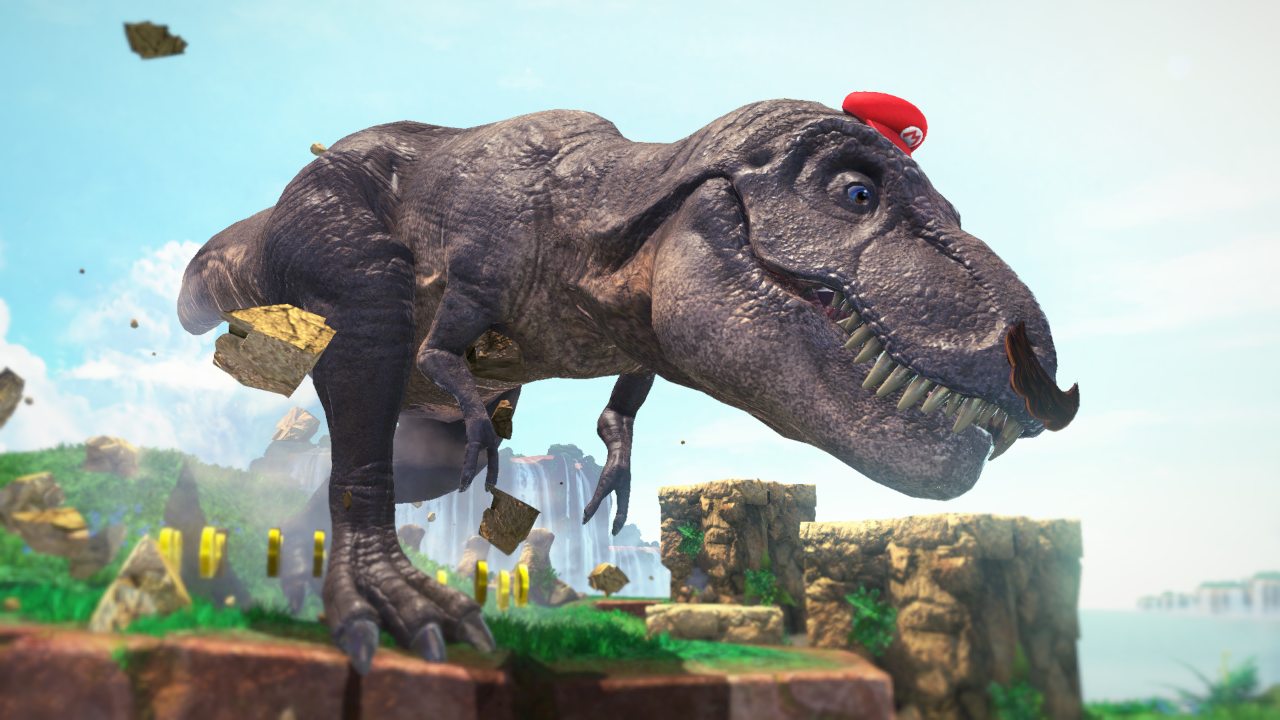 The world that Nintendo has made with Super Mario Odyssey is full of love and charm. Tons of items can be interacted with by throwing Cappy, and there are dozens of Easter eggs for longtime Mario fans. Even during my demo, I went inside the Odyssey (the vessel for which the game gets its name) and changed into an outfit from Mario’s Picross. Other outfits can be found throughout the game, like the one seen in Super Mario Maker, or even the one from Yoshi’s Cookie. Pauline isn’t the only familiar character players will find during their adventure either. Captain Toad can be found in New Donk City for those that look carefully, and he’ll even reward you with a moon for your trouble.

The graphics are an interesting take for the series. Mario almost clashes with the more realistic characters in the city, but at the same time, it’s this “out of place” aesthetic that makes it work. Mario doesn’t match, and it makes him almost alien to the citizens of the world, as the goofy style somehow blends with the realistic approach.  We’ll have to see more of the story to find out how exactly this world fits into the canon of the series, but right now, it’s incredibly exciting. It’s also worth noting that other areas seem to have more cartoony elements (like the Sand Kingdom, which even has a unique 2D Mario element similar to The Legend of Zelda: A Link Between Worlds). 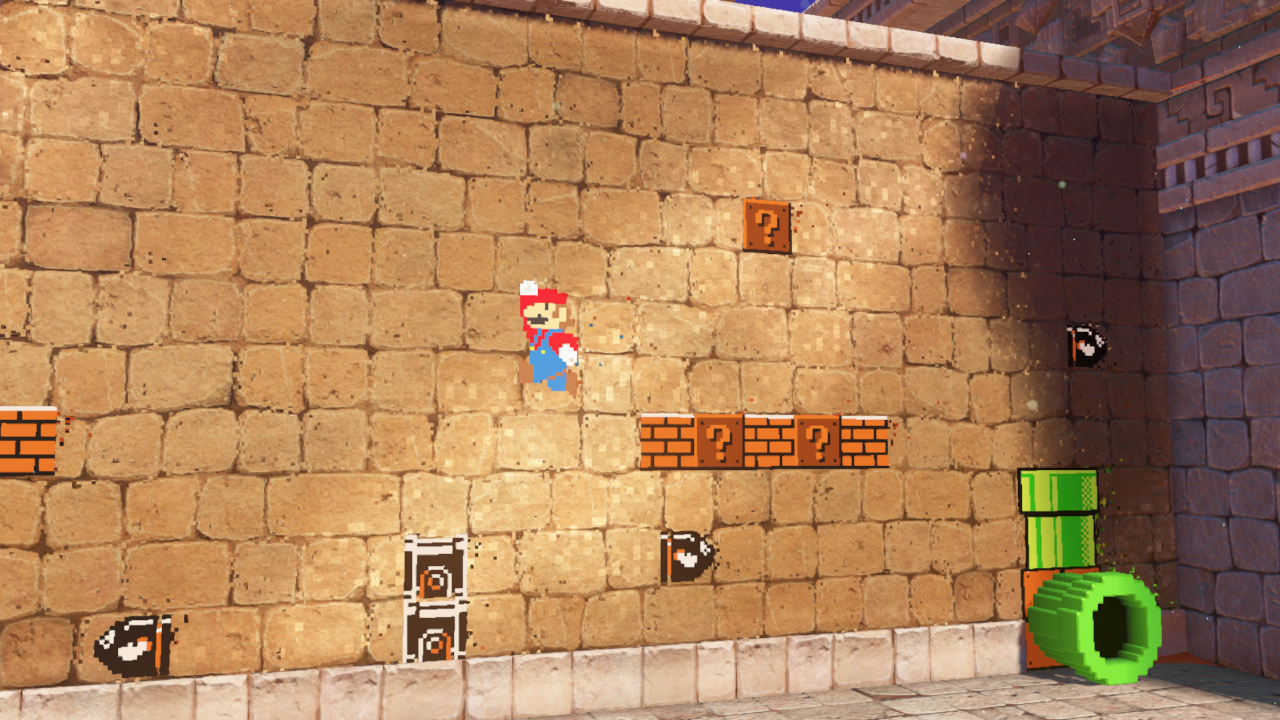 Overall, Super Mario Odyssey looks like a must-own title for the Nintendo Switch, even just from ten minutes of play. The game has a great sense of scale that feels reminiscent of Super Mario Sunshine and Nintendo has clearly outdone themselves with the amount of detail in exploring these stages. Each area explores new ideas and nothing feels recycled throughout the game. All this will be made even better when playing the game on the go, as the new pacing works perfectly for a pick up and play experience. Nintendo really blew it out of the park with this one and we hope to see more as we look forward to an October 27th release.