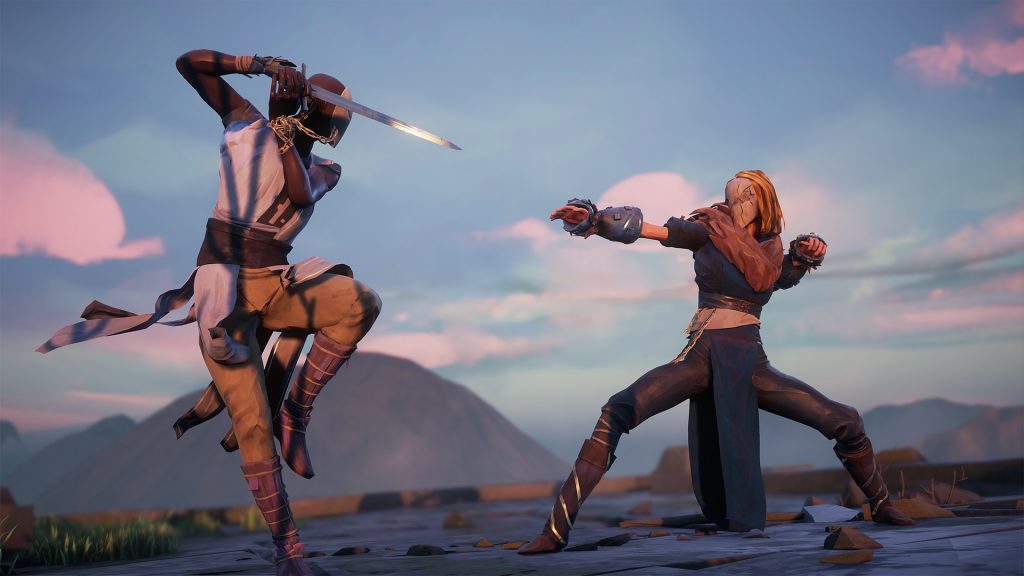 E3 always brings plenty of new games, and the indie games at the Devolver Digital lot, usually make a splash. Developer Sloclap brought a fighting game that takes a different approach to the genre: Absolver. Wearing a mask of a “Prospect” that makes you immune to hunger, thirst, and death, you fight others to prove yourself worthy of the role of Absolver. I traversed the lands of the fallen Adal Empire with Environment/FX Lead Paul Emile Boucher, teaming up to fight others and then battling each other. I got trounced, but I left the demo excited to see what the game has in store for full release.

Most fighting games rely on complicated button combinations to perform the strongest moves. Absolver instead relies mainly on just two attack buttons and four fighting stances. Absolver blends Dark Souls and Tekken as players circle in full 3D environments, managing their stamina meters to dodge and attack. The key lies in the Combat Deck: a series of combos you create using attack cards gained from combat. By switching between one of four fighting stances, players trigger different attack combos. To keep your opponent guessing, you can throw in heavy attacks, feint out attacks, and even summon a weapon to change your fighting style. This creates a fast-paced fighter that FEELS like you can button mash…but requires more attention than that.

Paul and I played Absolver at the Devolver Digital trailer for 30 minutes during E3. Absolver focuses on creating fluid, online-persistent gameplay: players can switch between PvE and PvP at will. I started by choosing my character class from three options:

I chose the Kahlt; I figured having the ability to soak damage would be a plus (and the Kahlt characters were black, so I naturally wanted to see how that class worked out). Paul chose Kahlt as well, and we ventured out into the wilds of the Adal Forest.

And the combat begins… 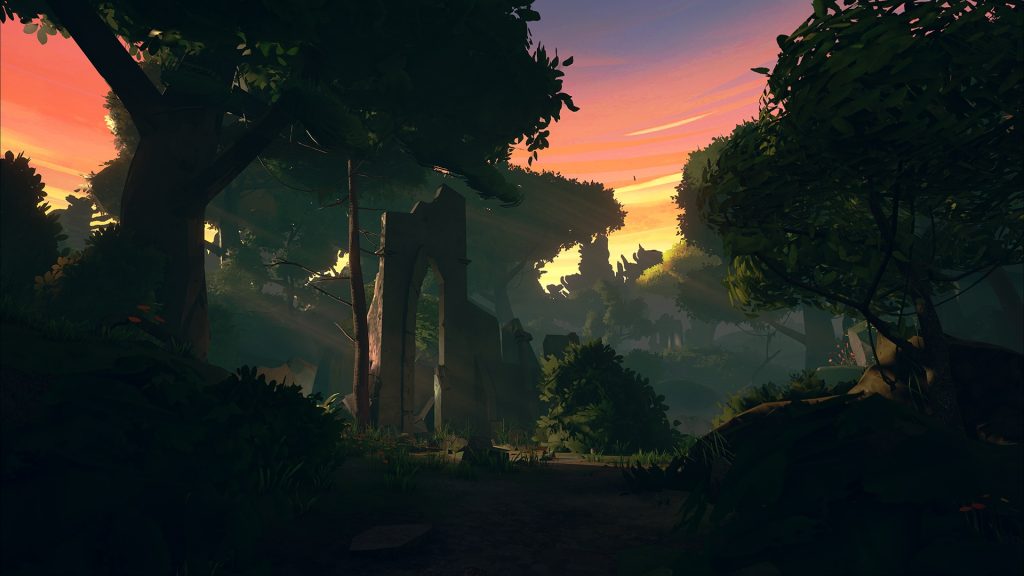 Absolver’s world feels lush and abstract, with a sort of light, minimalist   style After a quick rundown of the basic controls, we tackled our first opponents: a party of two other brawlers. We teamed up on the first of the enemies at the beginning, but friendly fire is always on and we hurt each other as well as the enemy. Once we took them out, a +1 showed up over my head, along with move logos. In Absolver each move used against you in combat counts as experience: you unlock moves by fighting others.

After we cleared them out, Paul taught me about the Kahlt’s Absorb ability. By activating a special counter-stance, I could trigger a short health-regen period that would last as long as I didn’t get hit. I’d also take the damage from the blow, but have access to an instant counter as well. Each class has a different special ability, and using them effectively is key. Aside from those abilities though, there were other moves I could use to turn the tide.

Also, since I was low on health, this was a great time to learn about shards. Though you gain health from killing foes, you can also use shards to bring some health back. Like a super meter in conventional fighters, shards recharge as you attack or get hit. You can spend shards to drink a health potion, or even summon a special weapon out of thin air. I also had an Earthquake attack, which stunned and damaged players around me. There were deeper ways to prep for battle though, as I’d soon find out.

After a bit more combat, we dove into the Combat Deck. Players have four fighting stances: front-left, front-right, back-left, and back-right. Though you can switch between stances at will, the most effective way to change is with your attacks. Each attack has a stamina requirement, as well as a starting and ending stance. The Combat Deck menu naturally filters out unusable cards, making it easy to create fluid combos. You also choose one weapon type to generate with your shards, and set up a whole new set of attacks based on that weapon. Pro players will create combo sets for every weapon, though: you can steal opponents’ dropped weapons and use them yourself. All the planning in the world won’t save you if you’re a bad fighter, though, and Absolver rewards skill on the battlefield

Even with the light/heavy attack system, Absolver rewards skill by allowing “perfect attacks.” Each attack ends with a brief white flash of light; starting the next attack with perfect timing makes it stronger and faster. Top-tier Absolvers will have to master their combos and timings to make sure each hit counts for its maximum potential. However, there are no moves that you can only access with perfect timing: every move in the game is meant to be accessible and have strategic value. 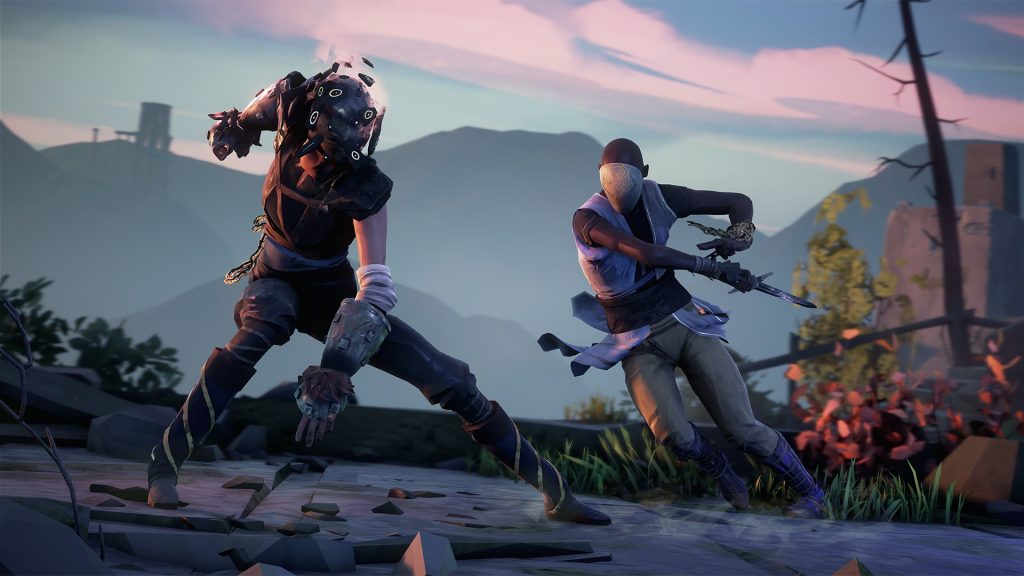 Brawling in The Outpost

We closed the demo by trying a new fighting stance: the Stagger style. Inspired by drunken boxing, the style allows for quick, unpredictable movements. They configured a Combat Deck that also included a sword, which I could summon by using all three shards. Replacing the Absorb ability was a sort of wild card dodge: I could either activate a side dodge, ramming attack, or a jump-back-and-counter. We’d arrived at a sort of derelict temple, a zone called The Outpost, where Paul decided I could learn the new style through some versus combat.

We switched to competitive play, going into the game’s 1v1 “best of three” style. Health stays persistent between matches: the loser revives with full health, while the winner gets a small health restore like they would if they defeated an enemy in co-op. Though I’d like to think I put up a valiant fight, he defeated me in the first and third rounds, taking the match. I could feel myself mashing buttons when I was anxious, but I could see how better knowing my moveset, as well as using feints and special abilities, could have turned the tide of the match.

Absolver was one of my favorite games during E3, and I’m looking forward to seeing what comes with the game’s full release. Though Dragon Ball FighterZ likely made the biggest fighting game waves, this game scratches a different itch. Many games are fighting for the eSports spotlight, but with full 3D roaming, deep customization, and an accessible gameplay style, Absolver could be the mind-over-thumbs fighter we’re looking for.

Absolver releases on August 29th for PS4 and PC. Learn more about the game at absolvergame.com.