Nintendo first showed off the Nintendo Switch back in January, using a special presentation to deliver more information for the console. During that time, they made a few announcements related to various first party software, including games like Splatoon 2, and Mario Kart 8 Deluxe. Of those announcements, one was announced with a live-action trailer, showing two people fighting with extending arms. It was then that the world was introduced to the world of Arms, Nintendo’s newest IP. We did a little coverage of Arms back in February, and we were left wanting to see more. Nintendo has been doing well to market Arms, even giving it a stress test in the form of the Global Test Punch a few weeks ago. Now the game is released and out in the wild, so how does it stack up? 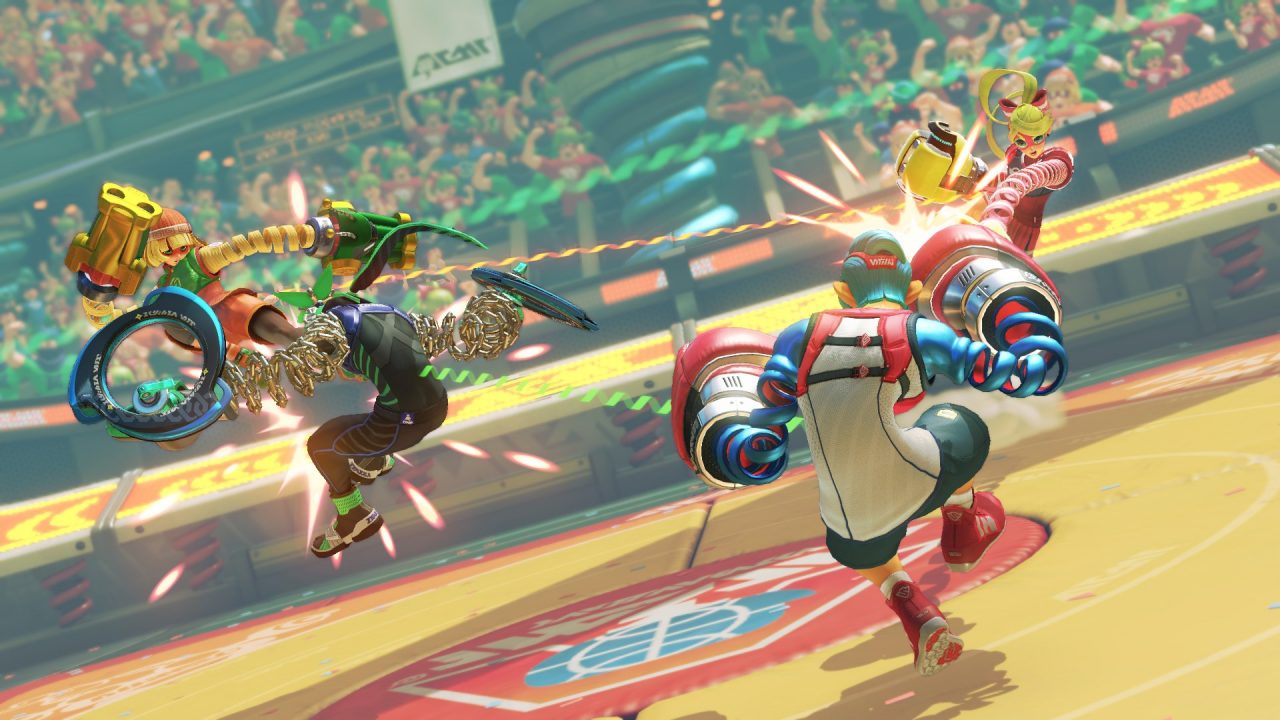 As said before, Arms is a brand new intellectual property, so it had a lot to prove right from the get go. Focused as a fighting game with a casual appeal, Arms took a similar strategy as the Splatoon series. Introduce a silly yet fun concept, add some charming elements, and top it off with a promise of free updates and support. Arms has a certain appeal to it that invites a competitive spirit, encouraging people to improve their skills and earn coins in the process. Clearly the focus was as a multiplayer title to get players online to play together, regardless of experience. Luckily, Arms has such an accessible setup, that it does that with pride.

Arms is a pretty simple idea. Various characters have some sort of limb or attachment (be it arms, hair, or a machine) that can extend out towards a target. Players control one of these colorful characters in various arenas and fight it out in up to four player battles. Each character has at least two special abilities that can either be passive or requires input from the player. This allows the characters to feel similar, yet also unique at the same time. 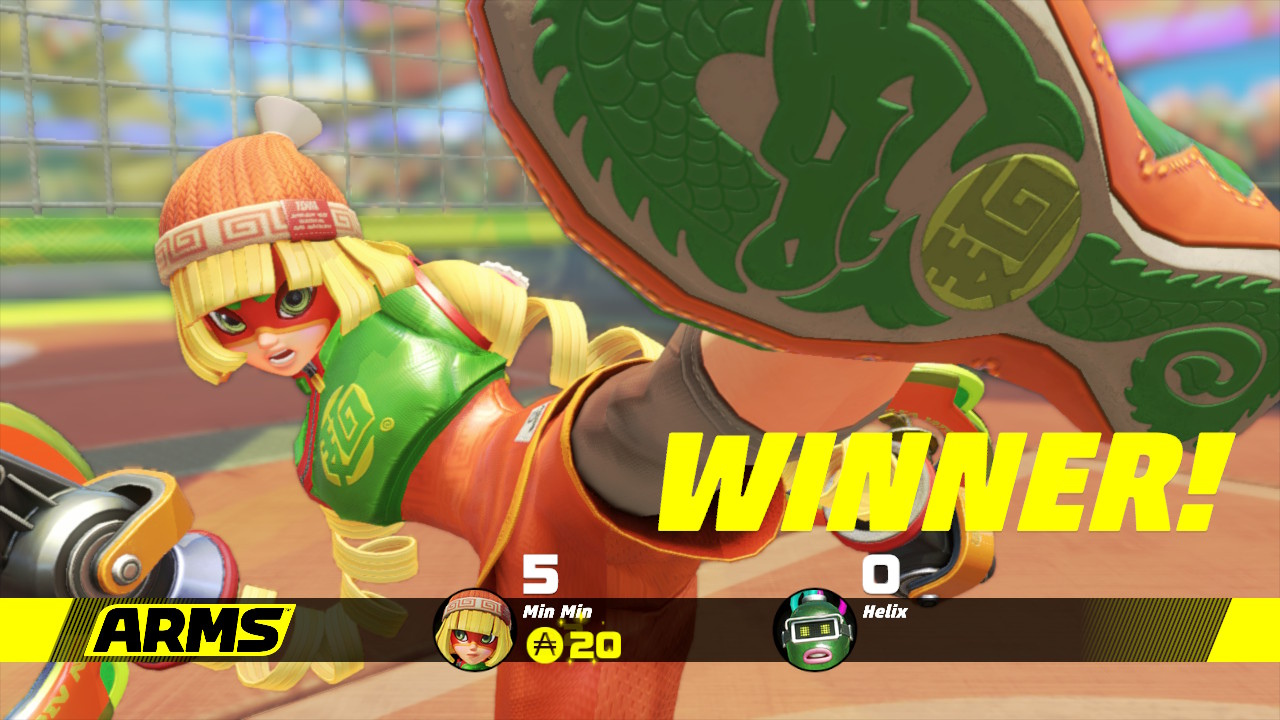 With fighting games, the game needs to have an appealing roster, and Arms does a good job to showcase each of the characters available. When playing the Grand Prix mode, each character is given interesting backstories and even commentary for each match that changes depending on the match up. Characters have great designs and all seem to incorporate their own backgrounds into their aesthetic, especially their extendable arms. Ninjara will have arms made of chains while Ribbon Girl will have arms made out of, you guessed it, ribbons. They all have simple but charming backstories as well, such as Kid Cobra’s career as a “snakeboarder” or Helix’s past as an experiment.

Overall, the cast is charming and it’s easy for a player to find someone that works well for them. Ribbon Girl can jump multiple times in midair while Master Mummy can heal while blocking. Min Min has the ability to kick away incoming attacks during a dodge move, which can be incredibly useful in the hands of a pro. Some characters even have passive abilities like a buff as they near defeat. These unique abilities give Arms a little flavor on top of what is somewhat simple, yet surprisingly deep gameplay. 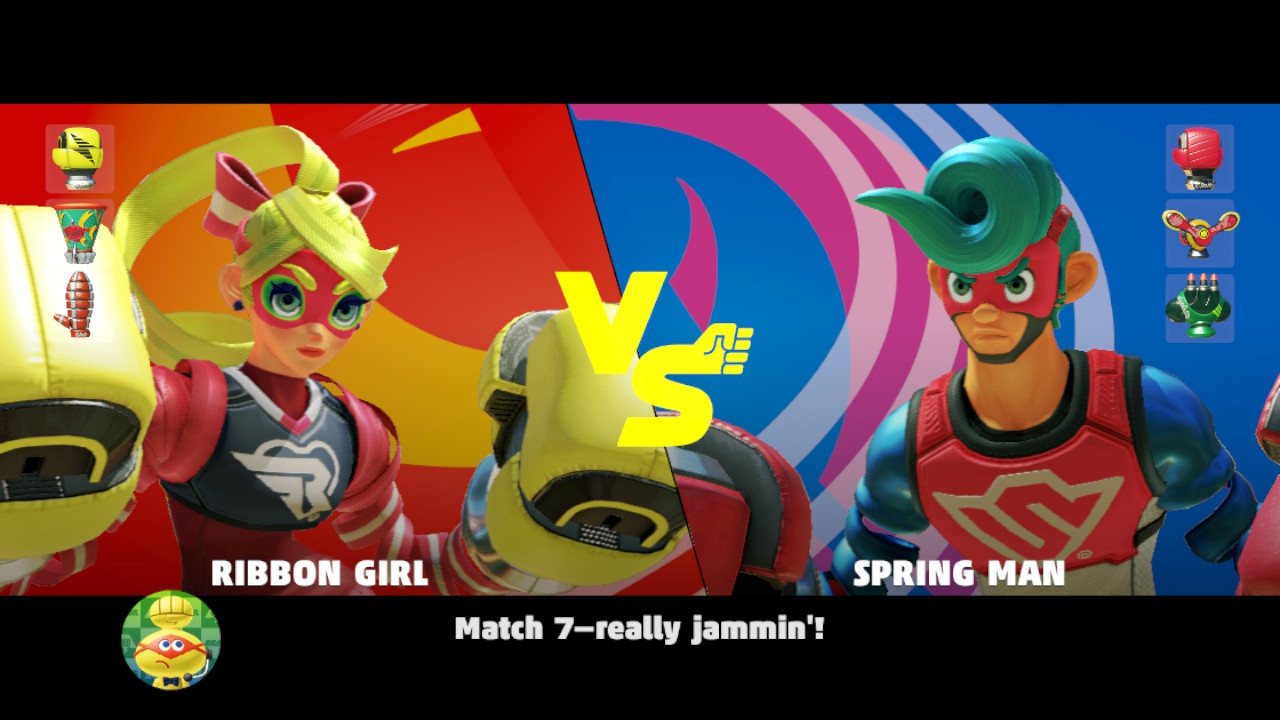 The game has several control methods, be it motion controls or traditional button controls. Players can punch with each arm for normal attacks or charge the attacks after blocking or dashing. They can also add a curve to their path, allowing for their attacks to be a bit harder to avoid. Characters can jump, dodge, and block as well, giving a lot of freedom to work with when fighting an opponent. Using both arms at once sends out a grab attack, which if the opponent gets caught, they’ll get thrown to deal some heavy damage. Then there is the rush attack, which players can activate upon filling up a meter and release a flurry of devastating attacks.

Like most fighting games, the various offensive and defensive tactics work in a sort of triangle. Punches beat throws, throws beat blocking, and blocking beats punches. It’s how the player uses these tactics in combination with their choice of arms that determines how they will achieve victory. Arms like the defensive Parasol, deflecting many attacks and delivering a powerful wind attack when charged up. The Coolerang can curve around opponents to distract them and also freeze them briefly. Perhaps the most useful would be any electric themed arms, since a charged attack from those have the ability to stun an opponent and make them defenseless for a few seconds, making a throw a perfect follow-up. 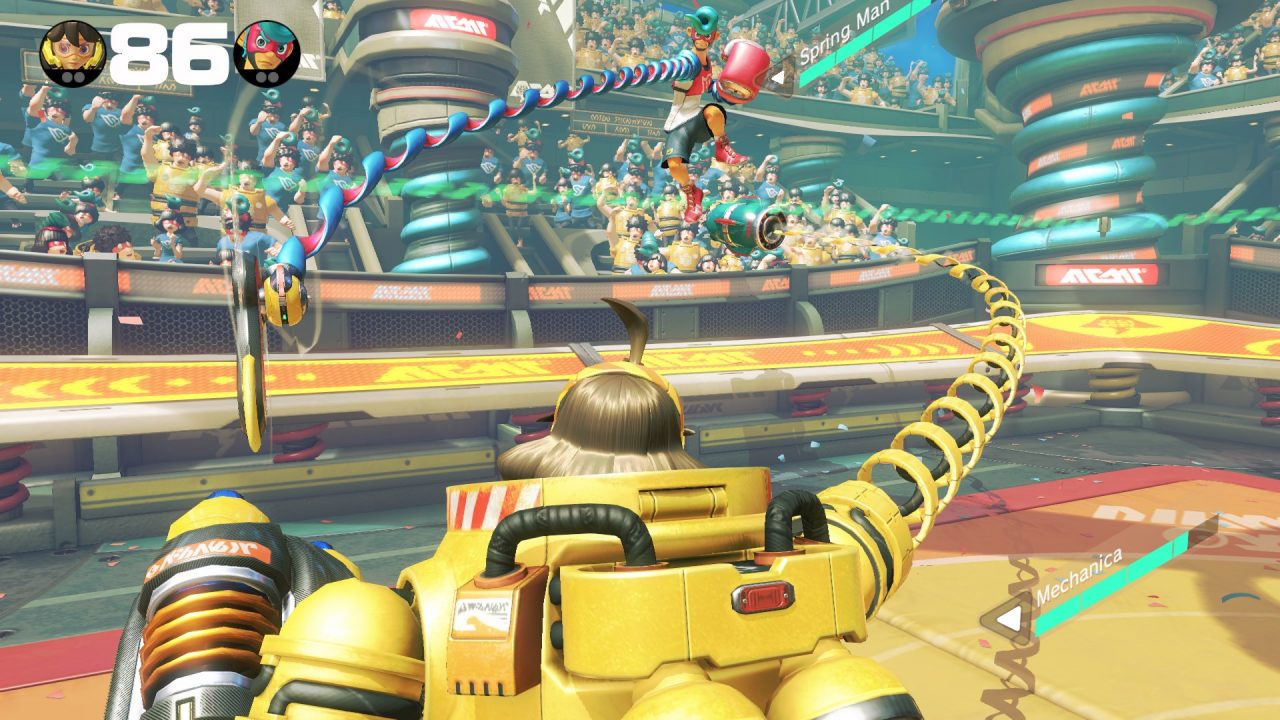 The game looks great in action, running in a smooth 60fps and with a fun style that looks good in motion. Characters animate fluidly and have their own charming quirks, even bringing their own fans to each match in the crowds. Stages are simple, but all have their own unique qualities like destructible environments or areas to give increased height from a jump. Various arms will have cool effects based on elements like fire, ice or wind, and those can have a stylish effect when charged up or even during the rush attack. Overall, for a fighting game, Arms is unique and has a great sense of style to set it apart from others.

The music is surprisingly one of the best elements of the game, adding a sense of energy that adds to the competitive theme. The main theme has a very simple chorus, but it’s hard not to enjoy the various vocalists renditions heard throughout the game. The energy level itself is perhaps the best part, as many of the tracks have a lively feel to keep players moving. A personal favorite would be Kid Cobra’s stage, Snake Park, which utilizes fast chanting and a fun rhythm. The characters don’t have full lines of dialogue, usually sticking to gibberish or humming, but sometimes they will say short English phrases. While nothing groundbreaking, the minimal approach helps to keep it from getting too annoying while still adding to a fantastic presentation. 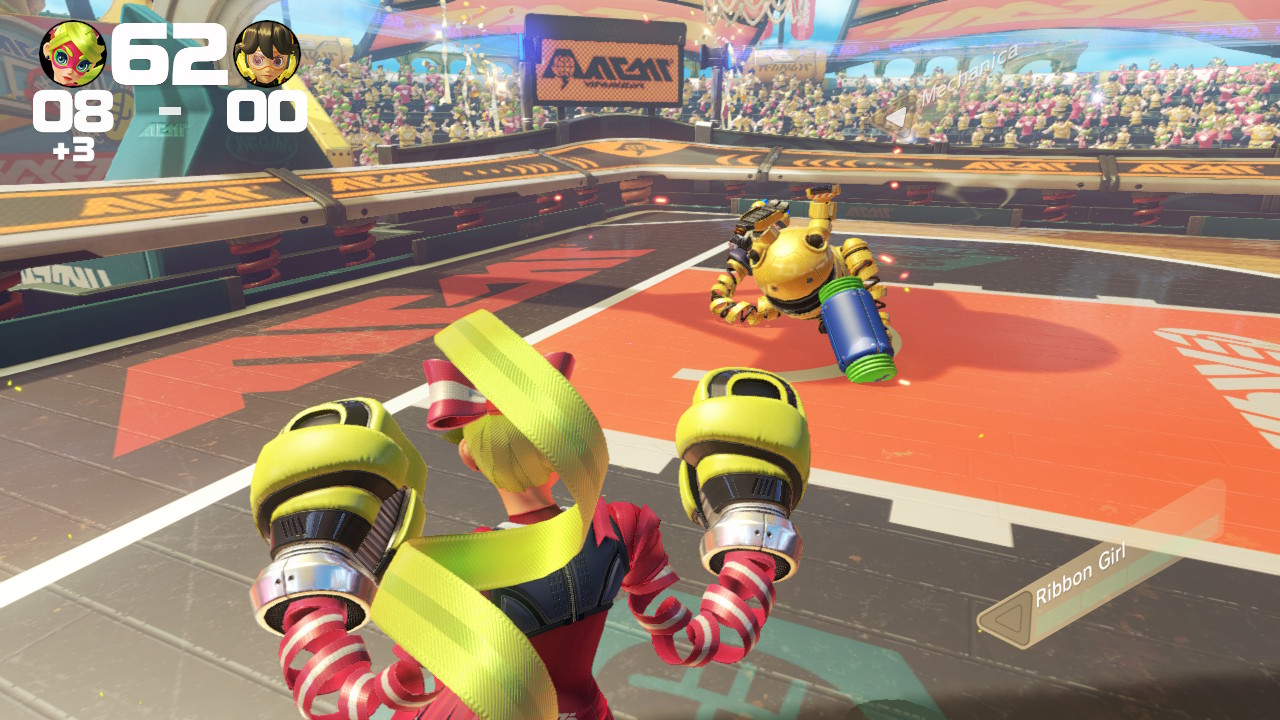 Getting to the game modes, there are the standard Grand Prix and Versus modes, but Arms also has various mini-games as well. Hoops is a simple basketball game where players attempt to throw each other into the basketball hoop, playing to ten points. V-Ball is a volleyball mode where players will have to hit an explosive ball onto their opponents side, and try to keep it there so it explodes, earning a point. Skillshot involves earning points by hitting targets as they appear in a sort of gallery, an opponent or two on the opposite side that earns points as well for successful hits. Finally, there is the survival mode of 1-on-100, allowing for players to test their skills against 100 AI opponents that get progressively more difficult as the numbers rack up.

Overall, the game has a nice variety of modes, and with the promise of more content releasing for free, it seems like the game has a lot of potential for new modes as well. The game has ten characters with at least one releasing next month as well, so hopefully Nintendo can keep up a consistent schedule for future content. As said before, the focus of this title is definitely multiplayer, and it shows when all content can be played with at least two players. Nintendo will want to keep things interesting if they want Arms to stand out among other popular multiplayer titles, or even other fighting games. Seeing the current product, it seems like they have a lot of potential to do just that. 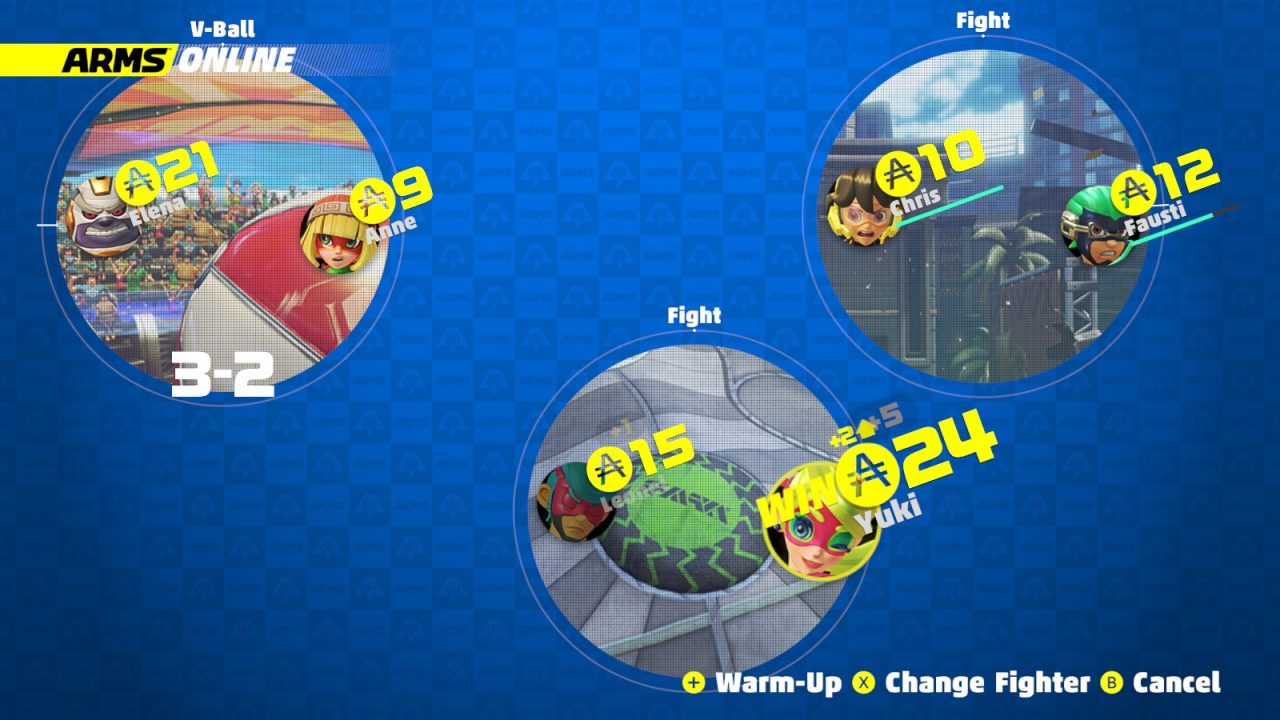 Getting to the online modes, Arms can be played with standard party match and a more competitive ranked match. When playing party match, players are placed into a lobby where they can match with multiple players, fighting the various modes at random. The lobby will pair up people for two to four player matches, and sometimes it can even do a three-on-one boss battle. While waiting for a match, players may practice with warm-ups against multiple bots as well (similar to the 1-on-100 mode). The lobby itself, while simple, works really well for this type of game. Players can see the outcome of each match in real time, though a true spectator mode is on the way soon.

Ranked match allows players to fight in a more competitive and balanced environment. All the stakes are higher since the player rank is on the line, and there won’t be any items or power-ups in the matches, meaning players can only rely on their skills. Ranked matches can earn more coins to use for buying arms with victory, so it can easily be worth a players time, even if they lose since they still earn more than they would if they lost a party match. 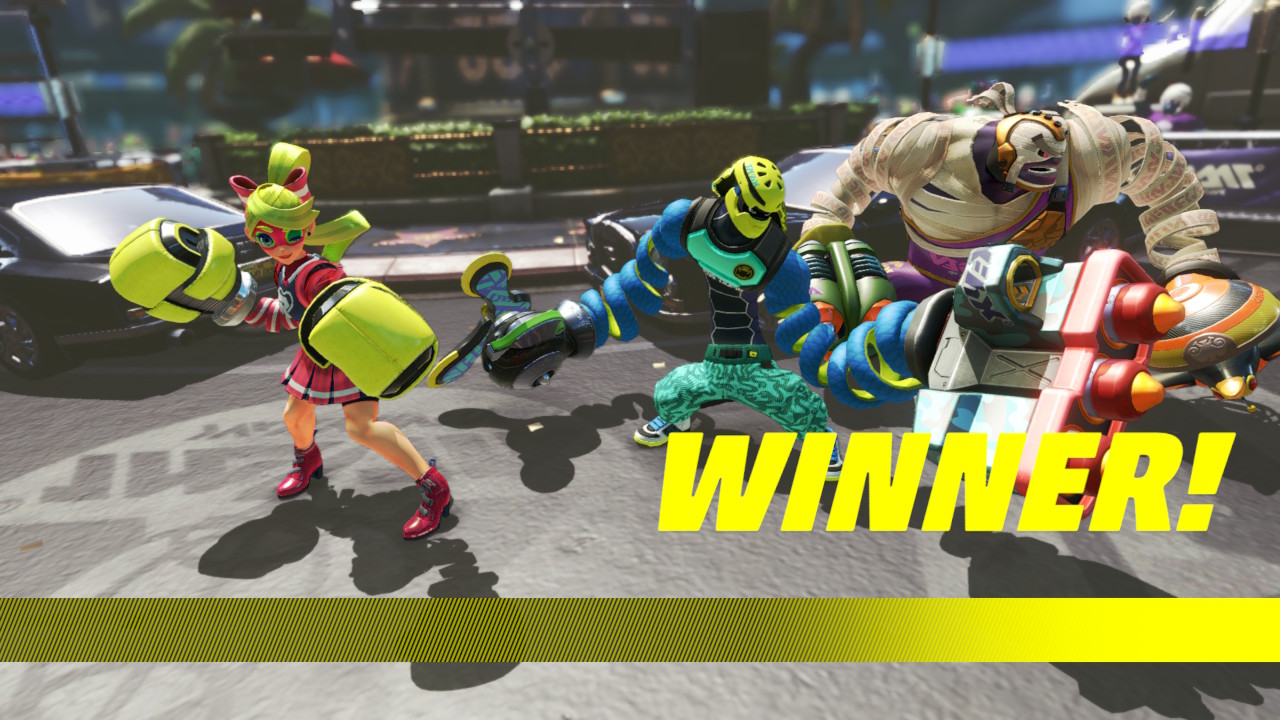 As for the use of coins, players can play a mode, simply called “Get Arms”, and use their coins to buy time for playing a different version of skillshot. Take down targets to level up the mode while hitting clocks to extend time, and hitting gift boxes to unlock more arms. When an arm is unlocked for a character, it can be switched out into the permanent loadout, allowing the character to use a different arm than their default set. This allows players to unlock a preferred weapon for a character with an ability that works best for them, adding some customization. Overall, the system works well and it gives players a reason to keep battling.

Arms may not have a strong story element, but the presentation still makes it a fun and engaging game to play with friends or even just hop online with. The graphics are solid and hold up well, and the characters are a fun and unique change for a fighting game. While the game will have more content released for free, the current product still feels more or less like a complete enough package to justify a purchase for fighting game fans. With engaging gameplay and a surprisingly deep strategy that is easy to pickup but difficult to master, it can be easy to see this game show up in various competitive circles. For the first title in what will likely become a franchise, Arms is a fantastic first entry.