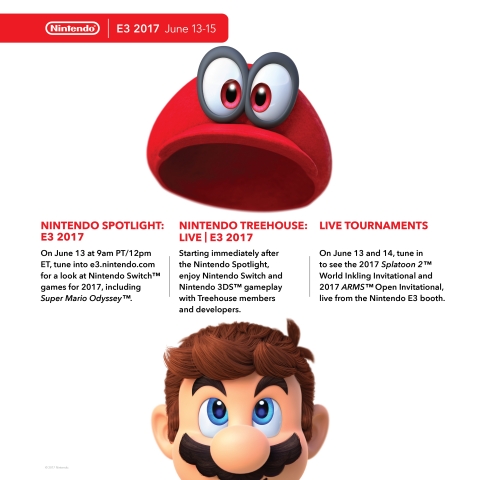 Nintendo, as part of their plan to deliver news about upcoming games throughout the year, has announced that they will be providing a packed week of activities during E3, which will run from June 13 to June 15 in Los Angeles.

Reggie Fils-Aime, President and COO of Nintendo of America, stated, “Our various E3 activities will showcase the next steps for Nintendo Switch, from a summer of social competitive gaming to a holiday season highlighted by a milestone Mario adventure. With Nintendo Treehouse: Live at E3, fans at home can watch in-depth gameplay of Nintendo Switch and Nintendo 3DS games launching this year.”

Their activities can be viewed at the official site and the presentation that kicks off Tuesday will offer up more details about Super Mario Odyssey and other Nintendo Switch games, focusing on those games that will launch in 2017.

After the presentation  of Nintendo Spotlight, they will feature Nintendo Treehouse, which is a live-streamed showcase of upcoming games for the Nintendo Switch and Nintendo 3DS. All featured games will have gameplay shown at the official site, as well as Nintendo’s YouTube and Twitch channels, with the livestream featuring behind-the-scenes commentary and information from the game developers and members of Nintendo Treehouse.

Once they open at E3, attendees can be among the first in the world to check out Super Mario Odyssey, which is Mario’s first sandbox–style game following Super Mario Sunshine and Super Mario 64, as well as other games for the Nintendo Switch.

They will also be hosting game tournaments, such as the Splatoon 2 World Inkling Invitational.

If you’re attending E3, do you plan to check out their booth?