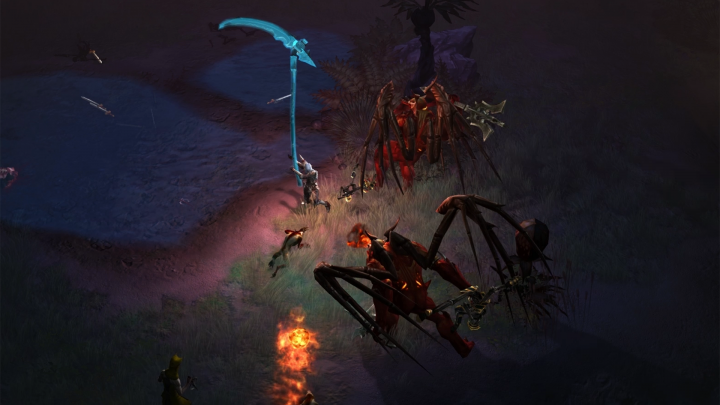 Diablo III fans at Blizzcon 2016 got a kick out of the reveal of Rise of the Necromancer, the upcoming DLC for the long-running action-RPG. Unleashing a new class, the event showed off a bit of the male Necromancer and his skillset. At GDC this year though, Blizzard revealed even more about their upcoming release during a press event at the W Hotel. After learning a bit about the design of the character and class, I fought off hordes of enemies as the all-new female Necromancer.

Senior Game Designers Joe Shely and Travis Day started the event by giving a presentation about the Necromancer class. Though their skills revolve around magic and pets, Shely still described them as “rock stars,” summoning armies of undead skeletons to do their bidding. The artists focused on themes of blood, bone, life, and death when designing the character models, resulting in lots of dark colors and angst. Her four sets of Legendary armor all feel intimidating and creepy, channeling undead mastery at every angle.

The Necromancer is fueled by “Essence,” a blood-themed energy recharged by killing enemies. Her most powerful abilities require a combination of Essence and HP, bringing an additional element of risk vs. reward into play. Corpses left on the field can be used for special Necromancer skills like the Corpse Explosion debuted at Blizzcon. The build we demoed focused on melee combat, utilizing close-combat skills to fight using one-handed sickles and two-handed scythes. The demo focused on showing off the Necromancer’s abilities though, each of which worked together to deal damage while keeping the player healthy and rolling in Essence.

The Grim Scythe ability summons a ethereal scythe to cleave through enemies in front of her, while Blood Nova sends tidal of waves blood out in a circle around her at the cost of Essence and HP. Devour instantly consumes all corpses on screen to boost HP and Essence, Leech curses foes so that you gain HP from attacking them, and Blood Rush allows you to teleport to any location on-screen. My favorite skill from the demo though was Blood Golem, a summoned pet that can explode to damage surrounding enemies, then re-form itself using corpses at another location on-screen. 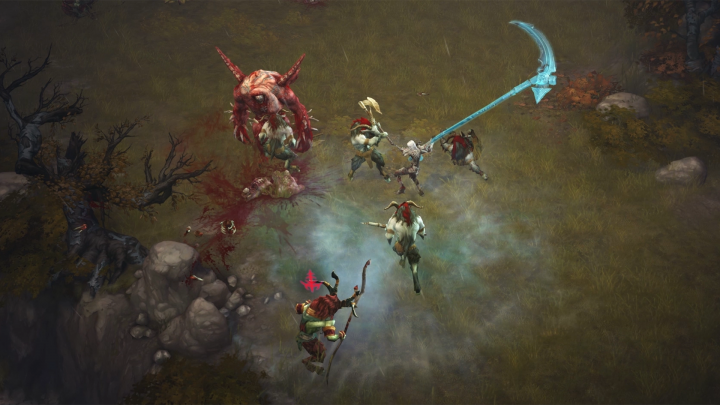 I played through a roughly 10-minute demo, destroying monsters spread around the map until I gathered enough energy to open the gate to the final boss. Using Blood Rush, I dashed into the center of mobs and unleashed multiple Blood Novas, doing quick splash damage to hoardes of enemies. This demo was on PC; though I’m typically a PS4 DIII player, it was still easy to work with the Necromancer’s skills to wipe out the opposition. The end boss fell relatively quickly, perhaps due to a difficulty setting, but it did reinforce that the build worked best when there were tons of corpses on-screen to convert into health and essence. Using too many necromancy abilities against low numbers of enemies, or a squad of high-health mobs can definitely turn the tide of battle against the necromancer.

After the demo, Joe and Travis answered some of our questions that the demo left unanswered. Pet fans will be excited to know that the Blood Golem isn’t the only golem available. Travis didn’t specifically name other golems, but said they could perform a number of different effects to change the flow of battle. Many questions related to the power of the blood skills, and how they seemed almost overpowered. Travis responded, saying “A general theme of the blood skills is that they feel really powerful, but that you’re giving up your health to do this thing. And then that’s a trade-off between the cost in health and coming up with a way to regenerate that health, so you’re making trade-offs in your gear, or your skill level, or your runes in some way.” Our Necromancers felt very powerful, but both Travis and Joe promised that the game would pose a challenge at higher difficulties.

It’s not hard to envision how a good Necromancer could really add to the damage potential of a questing party. The Rise of the Necromancer pack includes the character, an in-game pet, cosmetic wings, two character slots, two stash tabs, a portrait frame, pennant, banner, and banner sigil. Rise of the Necromancer’s release date is still TBD, but there’s plenty to be excited about when the content expansion releases.