Having released the stellar two-part season premiere in December, it seemed like Telltale Games really took their time with episode three of their hit series, The Walking Dead: The Telltale Series – A New Frontier. Plenty of fans were likely left in suspense to find out what happened after the conclusion of The Ties that Bind Part II, and now that Above The Law is finally out, it brings some peace of mind. Perhaps there was some intent behind the suspense, but the long wait seems to have gone towards polishing the episode, and it shows. Considering this series is heavily focused on narrative storytelling, there are spoilers from both the previous episodes in this review, as well as slight spoilers from this episode, so please proceed with caution. 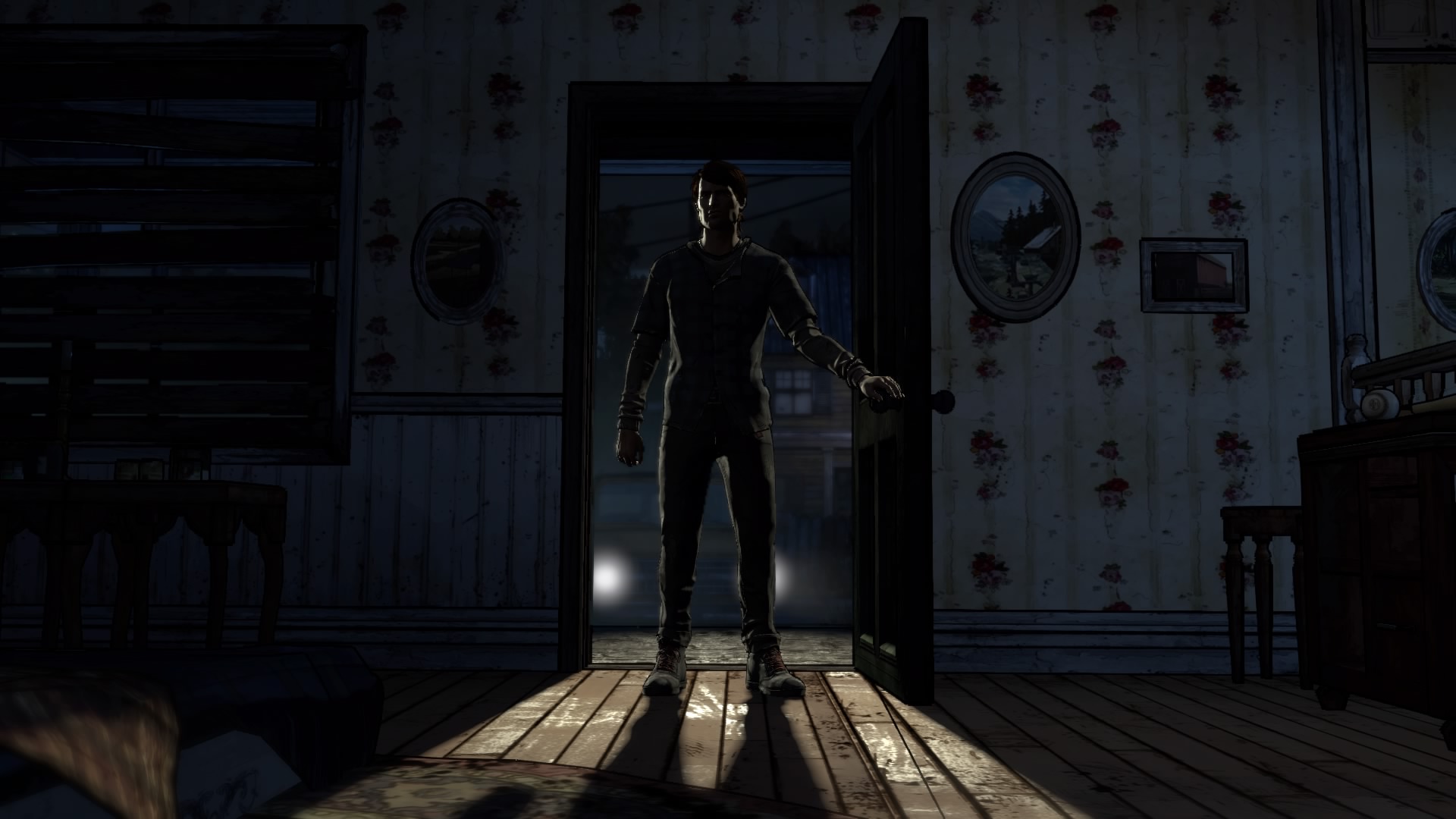 Episode three, Above The Law, starts off with a nice flashback that takes place three months after the start of the outbreak of the zombie apocalypse. Javier and Kate, his sister-in-law, do what they can to scavenge for resources while they leave the kids, Gabriel and Mariana, at their home. Waiting for Javier’s brother David, they make the difficult decision to leave the home and search for a safer place to try to survive in. While it explains the position the characters are in during the present day, this flashback is also important to provide a central theme about family and togetherness, one that carries through the rest of the episode in various moments (and the season overall so far).

Returning to the present day, and where episode two left off, Javi is surprised to get to Richmond, Virginia, only to find his brother David, alive and well. Not wanting to give too much away, it’s good to see that the tension filled air helps to make choices more difficult. Javi morally would want to keep his group safe, but both sides have reasons to be on edge. It’s up to the player to decide how to handle negotiations, and though most decisions still lead to a similar result, there are still consequences in relationships. It especially gets difficult if players decided to get closer to Kate, as David is completely unaware that his wife has feelings for another man that happens to be his brother. 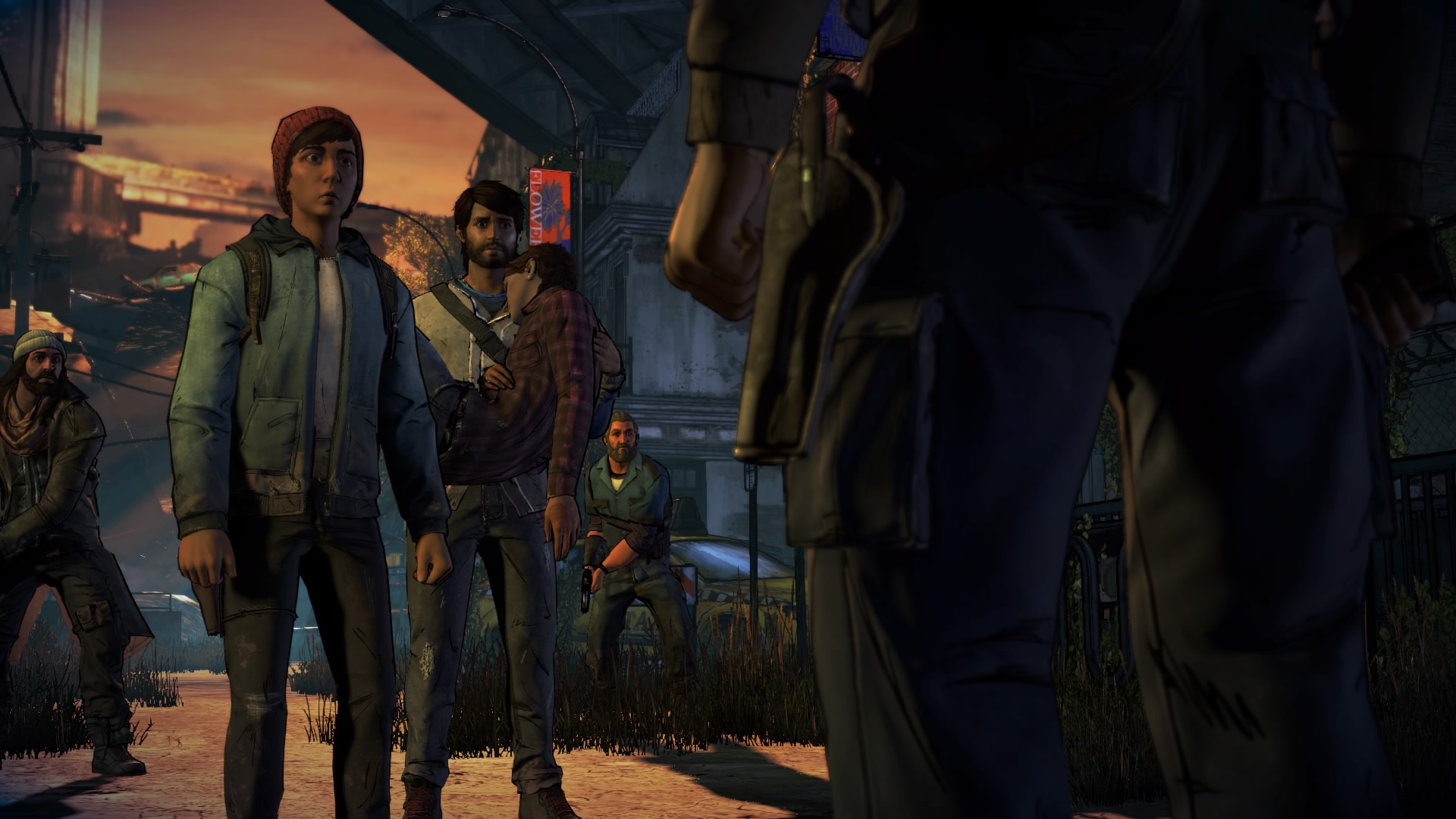 All the actors do well with their performances in this episode, providing what feels like genuine emotion, which feels necessary in a couple key scenes, though again, based on player decisions. One performance in particular felt a little unexpected, as it escalated so quickly into a complete emotional breakdown. Regardless, it was still incredibly heartbreaking to hear this character deliver such an emotional scene, made all the more emotional right at the very end if players paid attention to various details in the story. It’s worth noting that these key scenes also focus on the theme of family, and what it means to want to keep those we hold dear in our lives.

Javier continues to be a likeable new protagonist for the series, and filling in his story is essential to making that work. It’s good that Telltale handles it with care, as they give the player plenty of options to make Javi their own without taking away his character and charm. It becomes increasingly difficult to make decisions with him, which is great, because it shows a sense of attachment. Caring about Javi and his family is important to make the player enjoy the season, and though we had one terribly predictable death in the first episode, it seems like these moments are being handled better now. Instead of throwing in unnecessary deaths, this episode shows more focus on detailing relationships with the people around Javi, be they family, friends, or even at one point, an enemy. 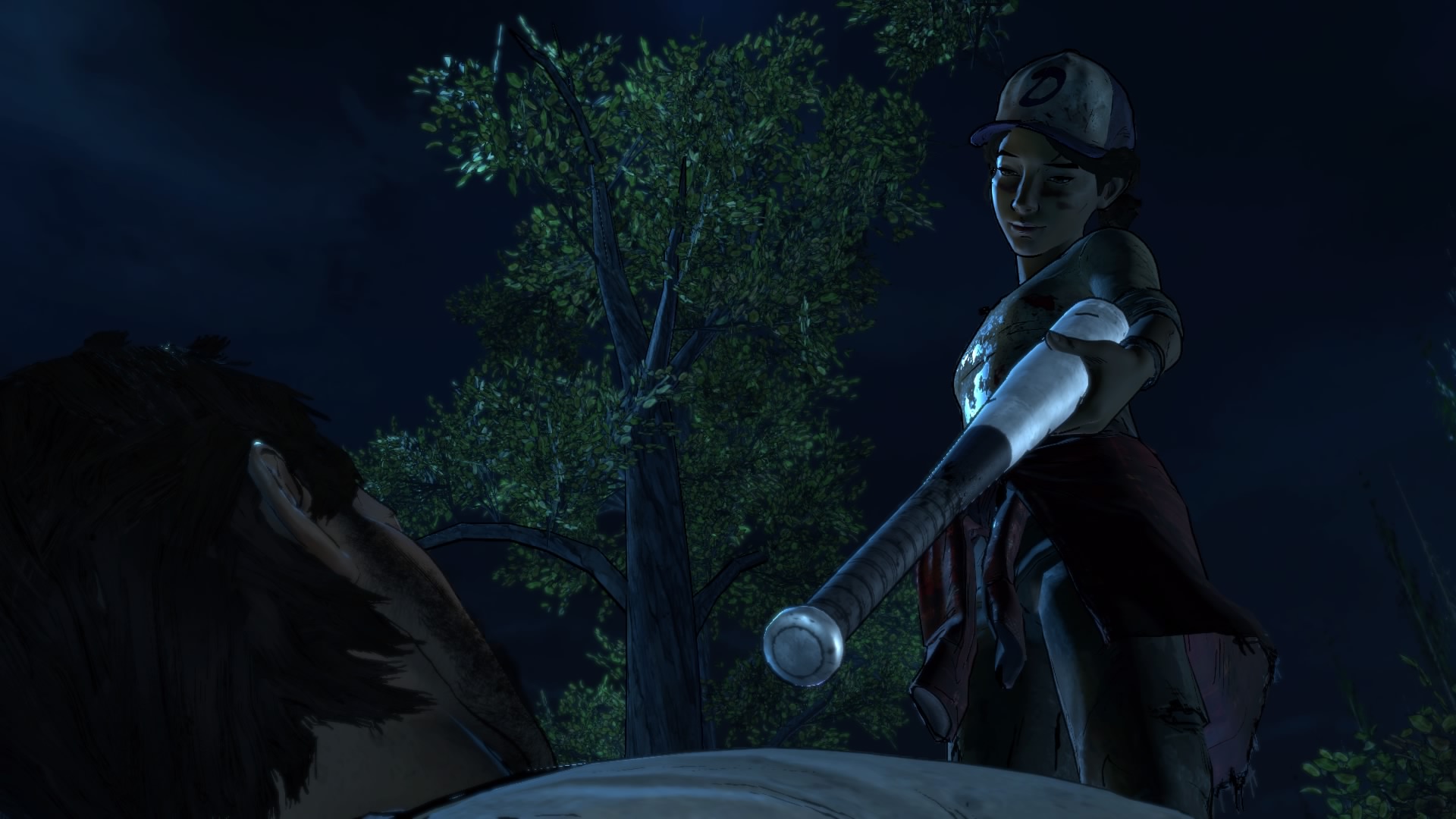 Clementine has another flashback sequence in this episode, which continues to build on the story after season two. It’s interesting to see how much focus Telltale is placing on these flashbacks, as each episode has had one so far. While it is great to fill in the blanks of the story, it feels like they may slow down the progress of the plot in the present time. This is a risky move, as it may lead to a less than satisfying finale, given that there are now only two episodes left, and while the threat is likely imminent, it’s in a stage of fluctuation. None of the particular villains have seemed very intimidating so far, and it feels almost a little like they’ll be throwaway characters without any real depth. Hopefully the next episode tackles this and fleshes them out more, as it would be great to see a bit more to their motivations, and also to see them as a true force to be reckoned with.

Visuals for this episode clearly must’ve taken some time, as Richmond itself is a very detailed city. Underneath the light grime and decay, there is a sense of prosperity that is fairly rare in this series. Children are playing, plants are growing, and there are normal supplies on hand that don’t feel like they should’ve survived four years of an apocalypse, but they did. Even the opening flashback has some beautiful details to take in, paired with a great use of composition and lighting. Animations are also fairly solid in this episode, with a few great fight scenes, and plenty of walkers to kill. It’s likely that this is one of the key reasons the episode took a bit longer to release. Telltale gets a lot of feedback and it often relates to their game engine, so it’s nice to see them take their time with an episode. Like the previous two episodes, performance was also superb, as there were no noticeable dips in frame rate yet again. That isn’t to say it’s perfect, as the game crashed twice in my playthrough, something that hadn’t happened in the previous episodes. While the crashing was disruptive, it seems Telltale was a step ahead of it, as the auto-save data was practically right at the moment of the crash, meaning no progress lost. 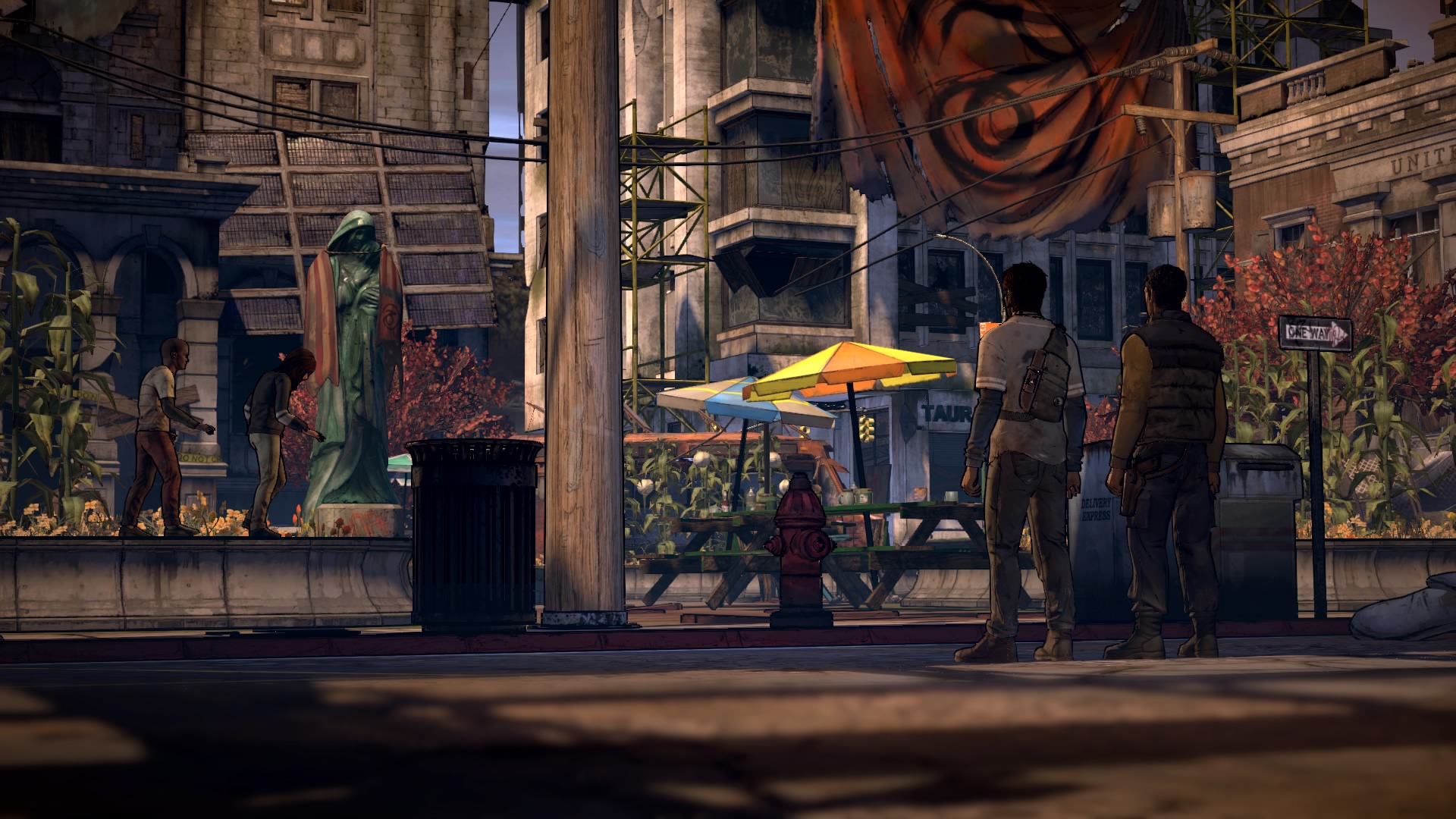 It’s worth mentioning that the episode length feels a bit longer this time, though not by much. Perhaps being released as a single episode is the main reason, but it was good to have a somewhat longer episode to enjoy. A good pace and less predictable moments make this a strong episode, and though it doesn’t do anything jaw-dropping with the story, there are a couple good twists. Some gears are even set in motion to provide even more emotional moments, as one characters fate is finally revealed. Telltale is taking notably longer to develop these episodes, and with their brand new Guardians of the Galaxy: The Telltale Series releasing next month, hopefully they remember not to leave their Walking Dead fans hanging too long again. At least after this episode, it’s clear the longer development time makes for a more polished product overall, which is good for their reputation, and good for the players.