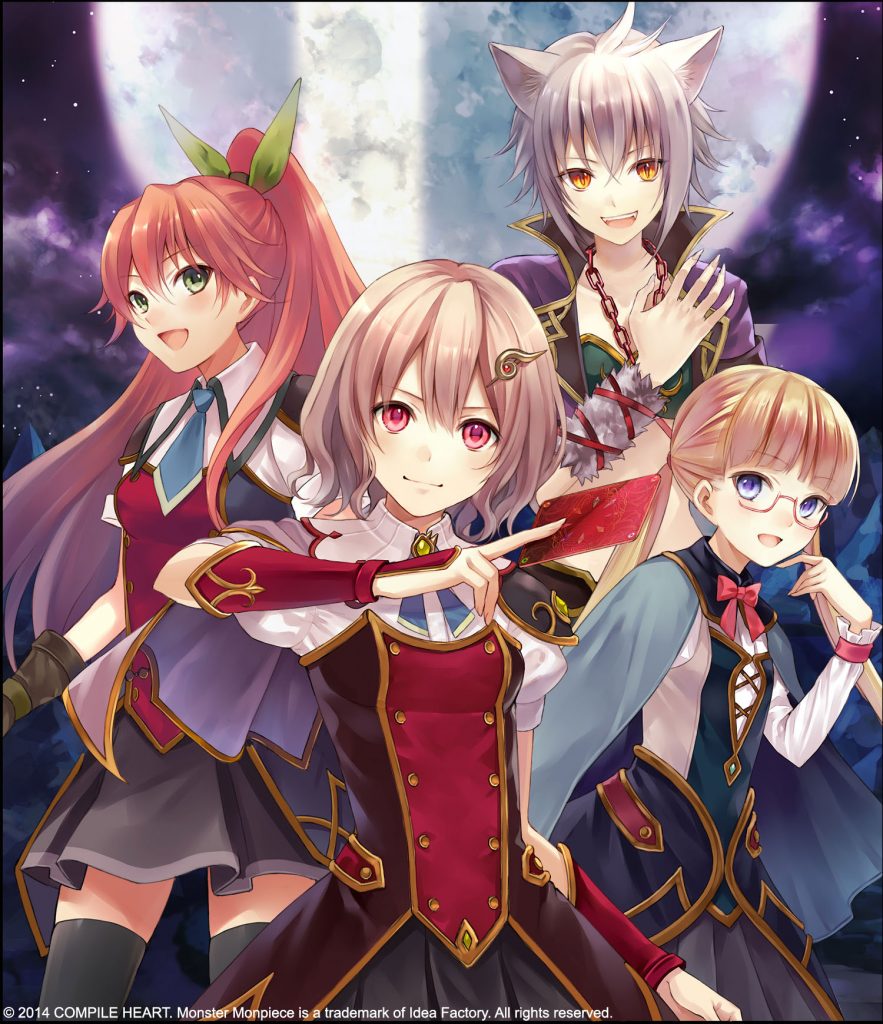 You may see Monster Monpiece and wish to just dismiss it as pure fanservice. This is understandable, as there is quite a lot within the game, but is there anything of substance beneath?

The title was initially released on the PlayStation Vita several years ago, enjoying a period of infamy thanks to the rather unique way you level up the cards in your collection. Each card represents a monster girl, and, on the PlayStation Vita, to level them, you needed to turn the console on the side and rub both front and rear touch screens rapidly. If you do this well enough, the girl powers up, with the picture losing some clothes, and, by the time she reaches level 3 or 4, she’ll be wearing only skimpy lingerie. This did, as you can imagine serve as a perfect execution of Compile Heart’s oversexed sense of humour.

The PC port, of course, does not have the mini-game presented the same way, and it can detract a bit from those who were eager for it. You will simply utilize your mouse to click or drag in order to poke, prod, and massage various parts of the girls’ bodies. You have a set time limit, and, if you hope to be successful, you will need to find the correct areas and perform the maneuver that they enjoy. Upon filling an energy meter, she strips and becomes more powerful, as mentioned. 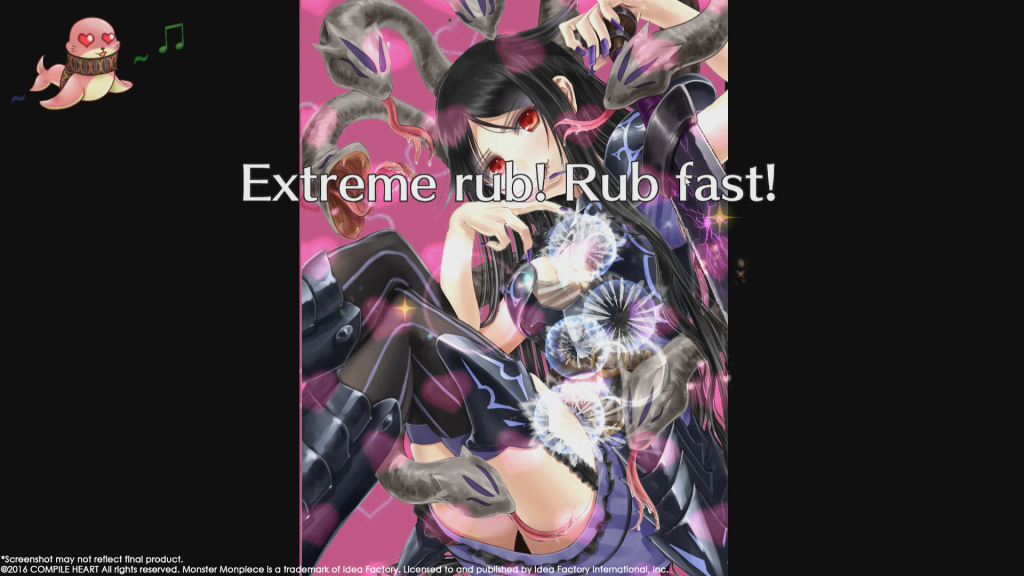 You can carry up to 40 cards to battle, and there are quite a few others, so you better prepare to play this mini-game a lot. This can be a bit frustrating, as you will likely want to get back to actually battling, and this is why it would be a mistake to write it off simply because of the huge amount of fanservice; The battling is actually incredibly strategic and well designed.

You will take your deck of 40 girls into battle, with the goal being to dish out a certain amount of damage to your opponent’s castle, as represented on the playing field. You can do this by summoning your girls to one of the three rows of squares. They will move forward one square each turn and dish out some damage if she reaches the final square before the castle.

Your opponent will be doing the same, of course, and you can block your enemy’s advance by summoning your own girls to the same line on the field. When two meet, they begin attacking each other until one is eventually knocked out and removed from play. 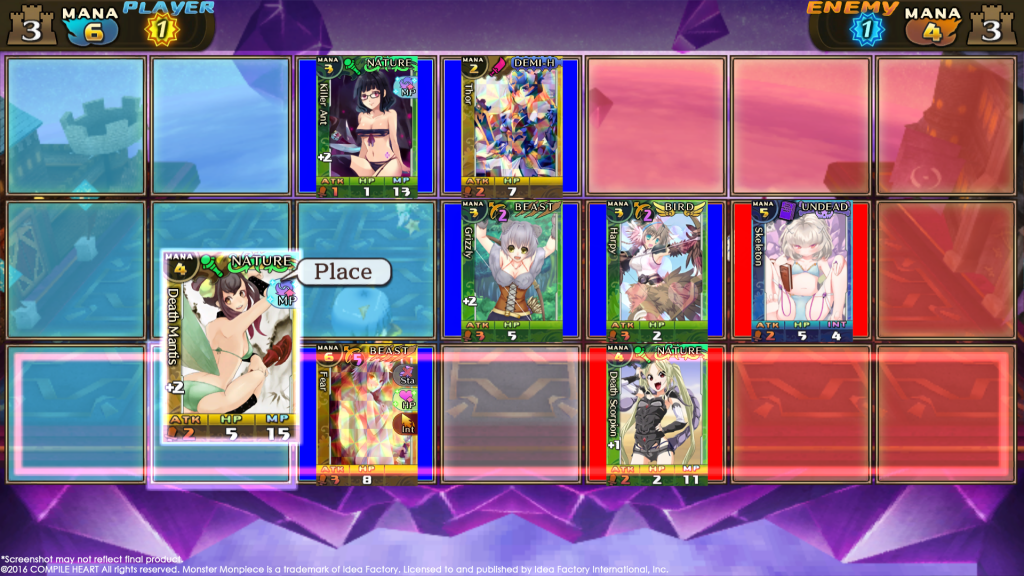 It all sounds simple enough, but there are several variations to consider. Some characters, for instance, aren’t good fighters, but rather support your front line warriors via powering them up or healing them. Others are ranged. Still others don’t move at all, instead serving as walls to block your enemies from advancing. If you have two cards of the same in your team, you can fuse them together, powering them up even more. And this is just to name a few.

This turns a fairly straightforward tactics card game into something quite complex, and you will need to balance your decks with both powerful and weak cards, due to the cost of summoning powerful allies meaning that your foe may simply overwhelm you with cheaper creatures, as well as attack and support cards. You obtain new cards via booster packs, per any other card game, and you may find yourself buying quite a few hoping to get just the right character you need to fully round out your strategy.

The single player content is more than enough to justify the price, but card games tend to be more social, so it would have been nice if a multiplayer component had been included. 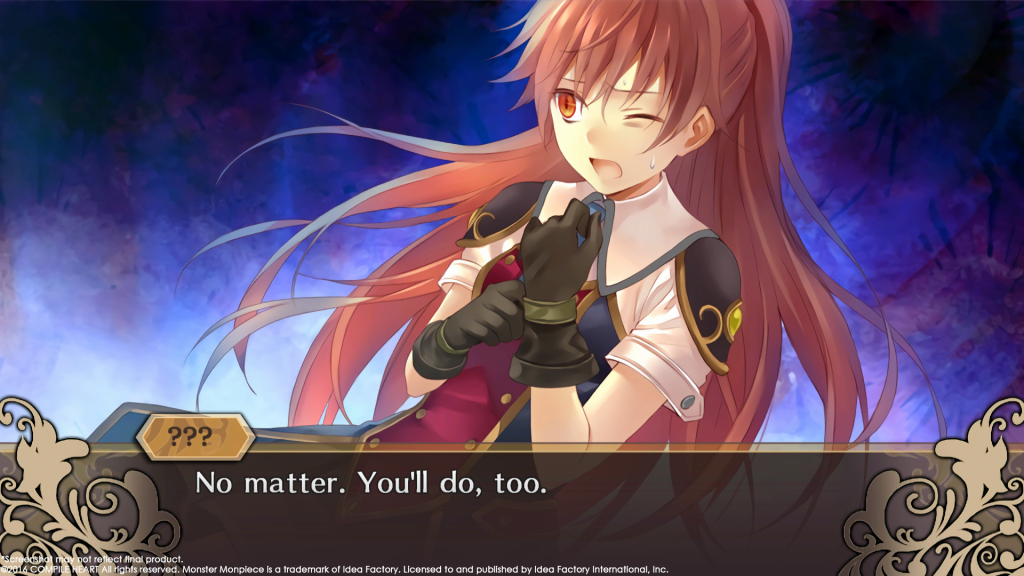 There’s not really much to say about the graphics and audio, to be honest. Both are quite good, as per normal Compile Heart standards.

Overall, Monster Monpiece is quite a fun and strategic little game that, if you can get past the fanservice, should offer you up many, many hours of fun. It would have been nice if there was a multiplayer option, but the game’s systems stand at a very high standard, so if you enjoy card games, you’ll definitely be interested in this one.