Ever since the Nintendo Wii, Nintendo has always found a way to show off features of their new home consoles with a piece of software to accompany it. Wii Sports was the cornerstone of the Wii’s launch and Nintendo Land did a good job of showing off the Wii U Gamepad in various ways. Now that Nintendo has launched the Nintendo Switch, it’s no surprise that they released a game to show off different capabilities of their new controllers and hardware. 1-2 Switch is a launch title with a multiplayer focus, and unlike typical games, it encourages taking the players out of the game and into the room itself. Acting as a sort of mini-game compilation for parties, the game definitely doesn’t take itself serious, but that actually works in its favor. 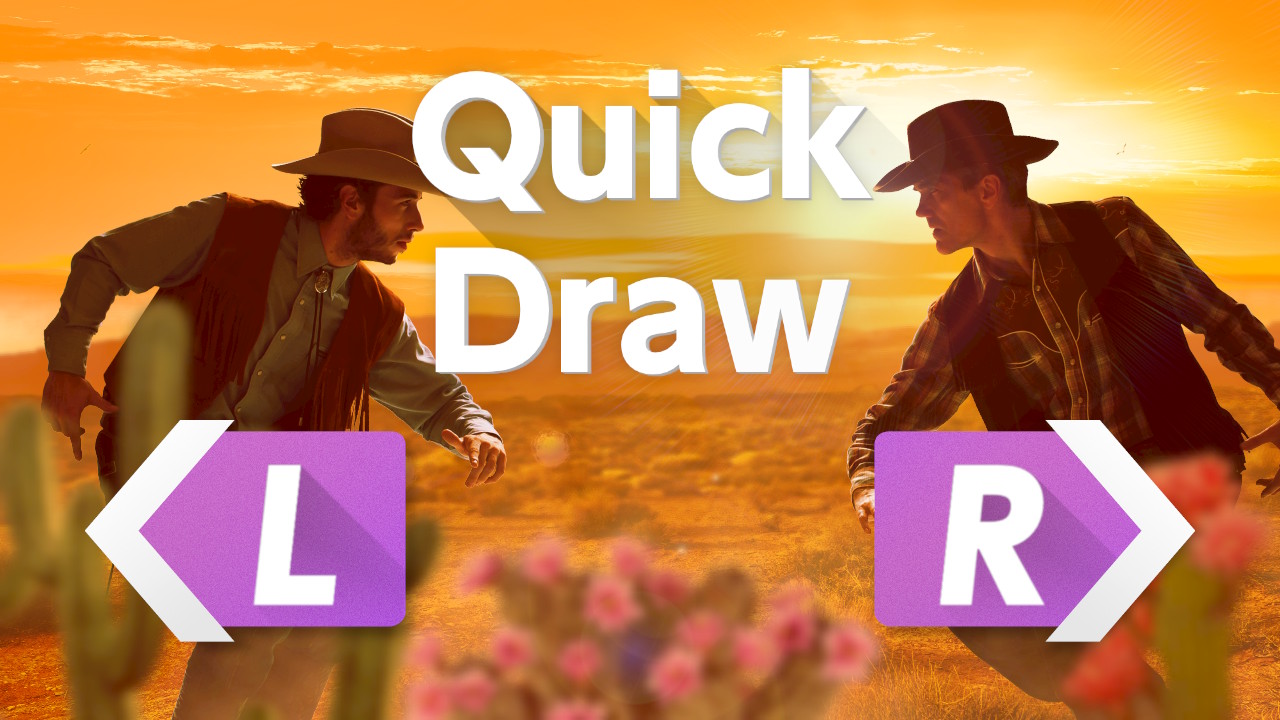 1-2 Switch is a collection of 28 mini-games, most of them very unique and different with a handful of exceptions. Ranging from normal games like Quick Draw to ridiculous looking games like Gorilla, what helps sell this package is the presentation. Acting more like a party game, it encourages players to really act however they want to. A lot of the games don’t even have a focus on the actual gameplay, but instead provide scenarios for players to simply mess with each other. Picture yourself as a kid playing a game, let’s say Street Fighter II, with an older sibling. They are clearly besting you and the only choice you have to win is to cheat, so you unplug their controller and get cheap shots. This kind of behavior is actually encouraged in 1-2 Switch, and it makes for an all new kind of party game that works fantastically well.

Take the game Plate Spin for example, where two unknown actors dressed as clowns spin plates on sticks, trying to keep them spinning. The clowns immediately start messing with each other to get the other to drop their plate, trying to win by whatever means necessary. After the video shows the goal of the game, the game immediately has both players practice spinning an invisible plate on the top of their joy-con. Once the game begins, it doesn’t take long for one person to try to make the other drop their plate, and that’s where the fun begins. It can be rather impressive to see ones determination by sheer willpower alone, but someone eventually emerges victorious. 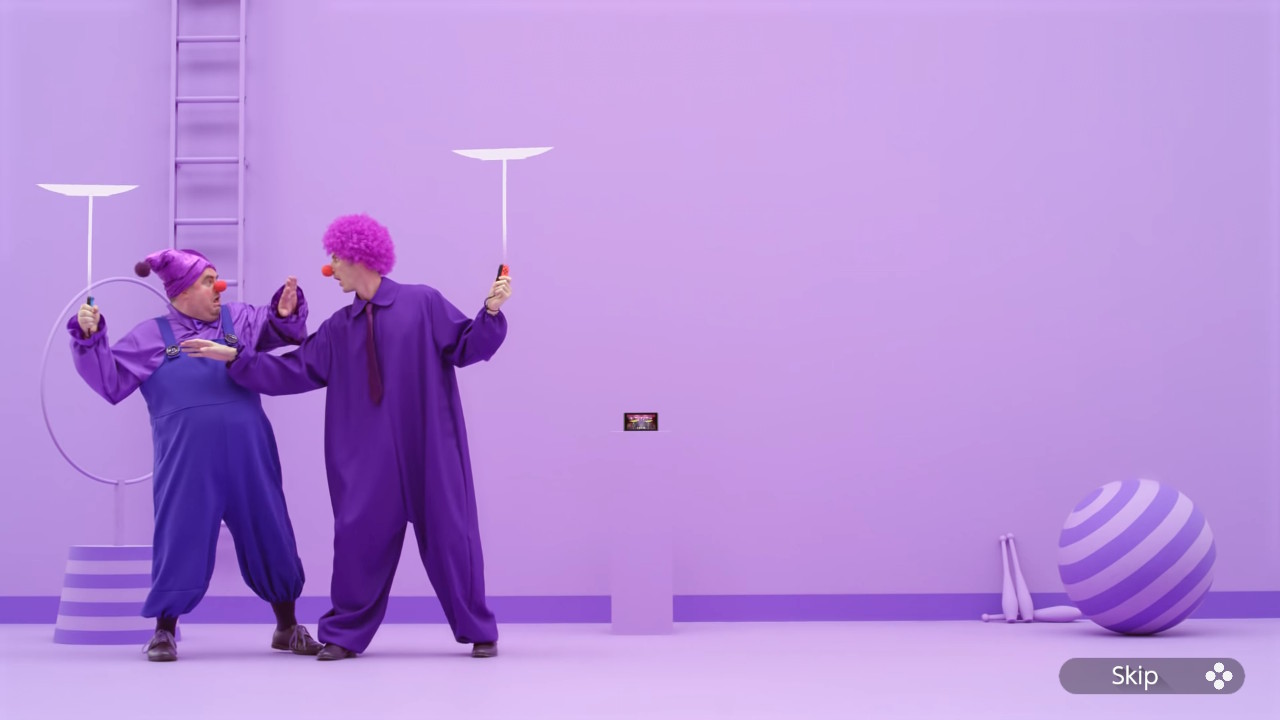 All the games have a similar presentation to Plate Spin, as they all show overenthusiastic actors performing various games. The whole presentation uses a sort of stock photo look with silly costumes and overdramatic reactions, truly selling the exuberance of the games. While this presentation can be viewed as lazy, it actually helps ease the players into the experience with how ridiculous it seems. Players are first given a handful of games to play, directed to play five of them before unlocking the full set. Players may find it hard to move on to the unlocked games just because they want to win the starting games.

While some reviews may get into every detail about each and every mini-game, it ruins some of the surprise to talk about each one. While this isn’t the kind of game one can really spoil, it still adds to the charm to discover the zaniness while playing. So instead of detailing all the games, it would be best to simply say what works and what doesn’t. Since one of the main draws of the game is to make players look silly (similar to Warioware: Smooth Moves), the game manages to succeed with just about all 28 mini-games. Gorilla makes a monkey out of players and Zen makes them hold Yoga poses to see who can last the longest. 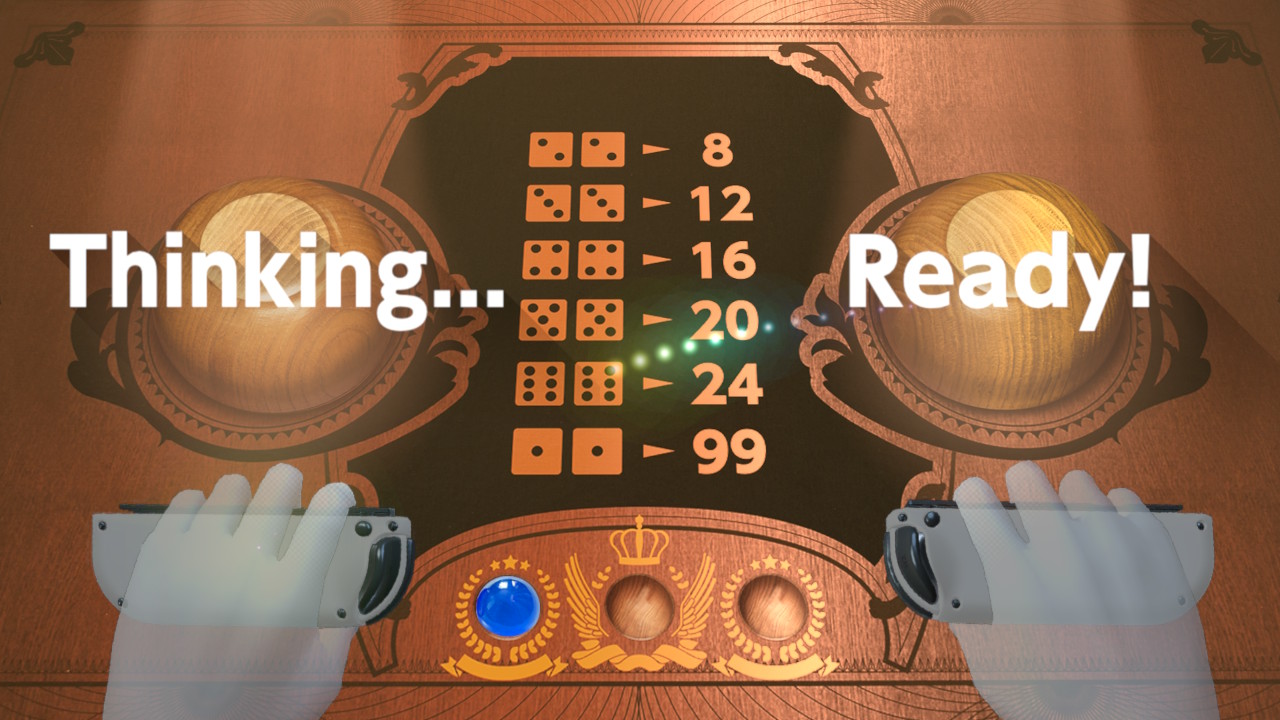 As mentioned before, many of the games will encourage players to sabotage the other. Aside from Plate Spin, a great one can be Sneaky Dice, which at first seems like a game of chance, but really ends up being a bluffer’s game. Players will feel their controller vibrate the number of times equal to their opponent’s dice roll. This means that players will have to take a risk or even a lucky guess to try and get the edge over their opponent. While the tutorial video shows an obvious tell, players will have to use their knowledge of their opponent to try and trick them into defeat. Even if the player manages to do this, it doesn’t always succeed, but players can up the ante with an extra dice roll or two. It’s games like this that really create a moment of suspense, and one can really see how stubborn someone is when they decide not to re-roll their dice.

The game Fake Draw is another good one that has players rely on their listening skills. Like the starting game Quick Draw, the first player to draw their joy-con and pull the trigger wins, but with a twist. The announcer will say several words starting with the letter “F”, so while the player waits for the word “fire”, they may have to sit through a series of fake-outs. All the words come associated with a stock photo-like image on the screen, so if the announcer says “fromage”, a picture of a mouse eating cheese appears. Tension can easily fill the room as the players wait to hear the word, as one slip up means a loss. It really makes for a funny moment when the game says “fire” first and one player doesn’t draw because they weren’t expecting it. 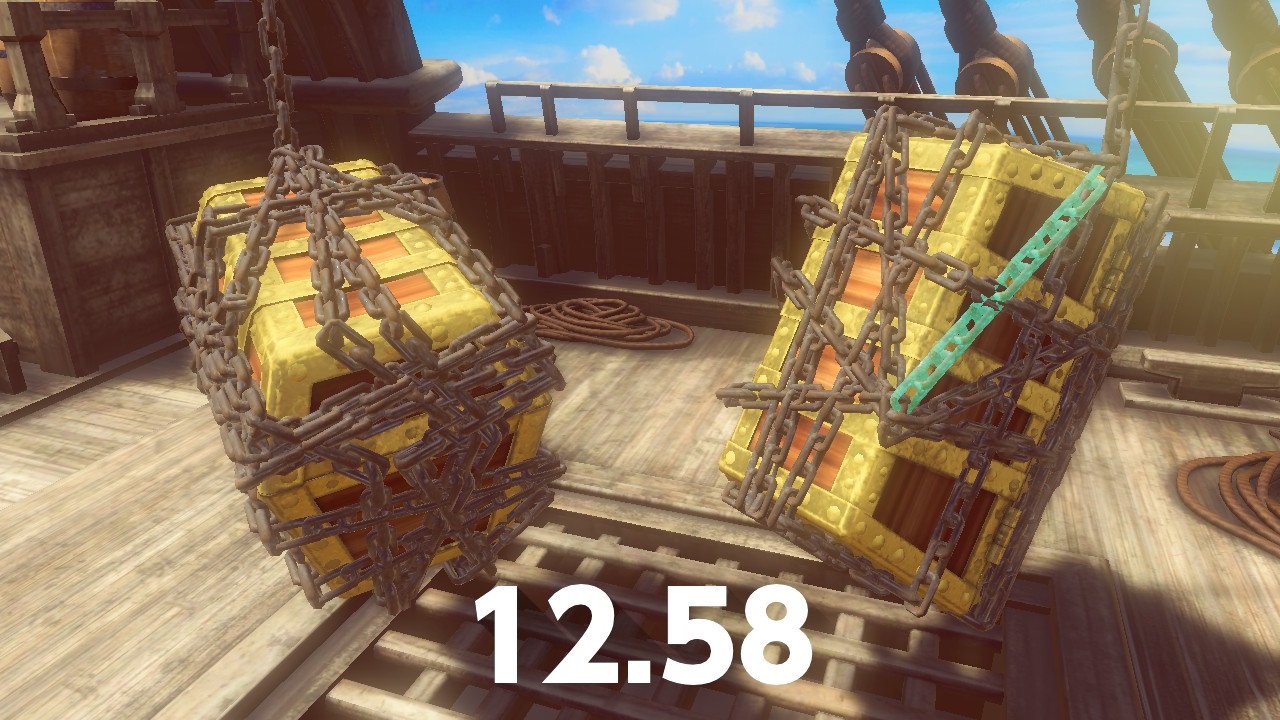 Where the game tends to stumble is when it gets to the more confrontational mini-games. Games like Sword Fight or Wizard can make for some confusing clashes, as it can be difficult for players to determine who is winning just based on watching. Sword Fight in particular is difficult because players will likely just wave their joy-cons about, maybe deflecting attacks, or maybe getting in hits. Wizard is a bit easier to follow, though it can feel a bit one-sided sometimes to see someone get a good start, only for their magic beam to be countered all the way back to them for a defeat. It does at least feel fun to try and act out a Harry Potter style wand battle. Even Baseball feels a little off because it can be hard to time the swing of the bat just based on an audio cue, especially when a hit doesn’t guarantee a run (imaginary outfielders can catch your ball, which just makes this game feel like chance).

One of the big features of this game is the use of HD Rumble, a new feature of the controllers of the Switch. Some of the games utilize this feature well, like Ball Counting, where players have to guess how many balls are inside their controller. It felt pretty good when tilting the controller and feeling the imaginary balls clink together, and after a bit of time, it became pretty clear how many balls were in the controller. Soda Shake is another good example that simulates the fizz of a carbonated soda inside the controller, playing like a version of hot potato as players pass around the joy-con to try and get the next person to pop the soda. Overall, it would have been nice to see more games use this feature, but on the bright side it would leave it open for exploration for future games. 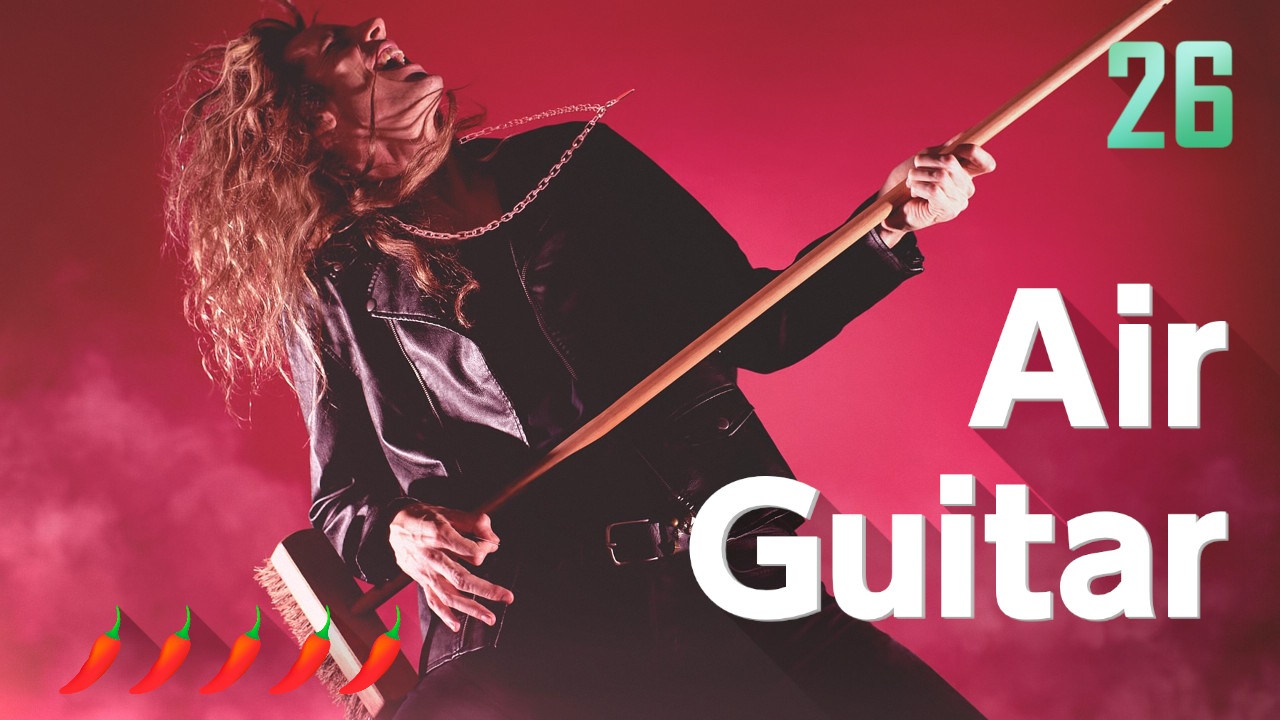 Another feature used is the IR motion camera, though only Eating Contest actually uses it, more than likely due to the camera only being on one controller. While it is a fun little example of the feature, it isn’t really one of the stronger games, though it succeeds in making the player look foolish as they pretend to chomp on imaginary sandwiches. Players will most likely play it once and only once more to show new players. This can be said for some of the other games as well, though it can be pretty situational depending on the audience. Introducing the game to new players is absolutely part of the experience, as the game names are so simple that they invite the curious to try.

It is also worth mentioning the team battle mode, which is suggested for up to 20 players. Players pick teams and take turns switching off for mini-games in a board game style mode. The winner of a game stops a roulette wheel that moves their game piece, and whatever game it lands on is what the players will play next. If the player accidentally lands on the switch icon, then the other team gets to spin the wheel instead. It’s a fun mode that helps when there is a larger party of players willing to participate, and it even adds extra depth to some of the games to encourage team play. 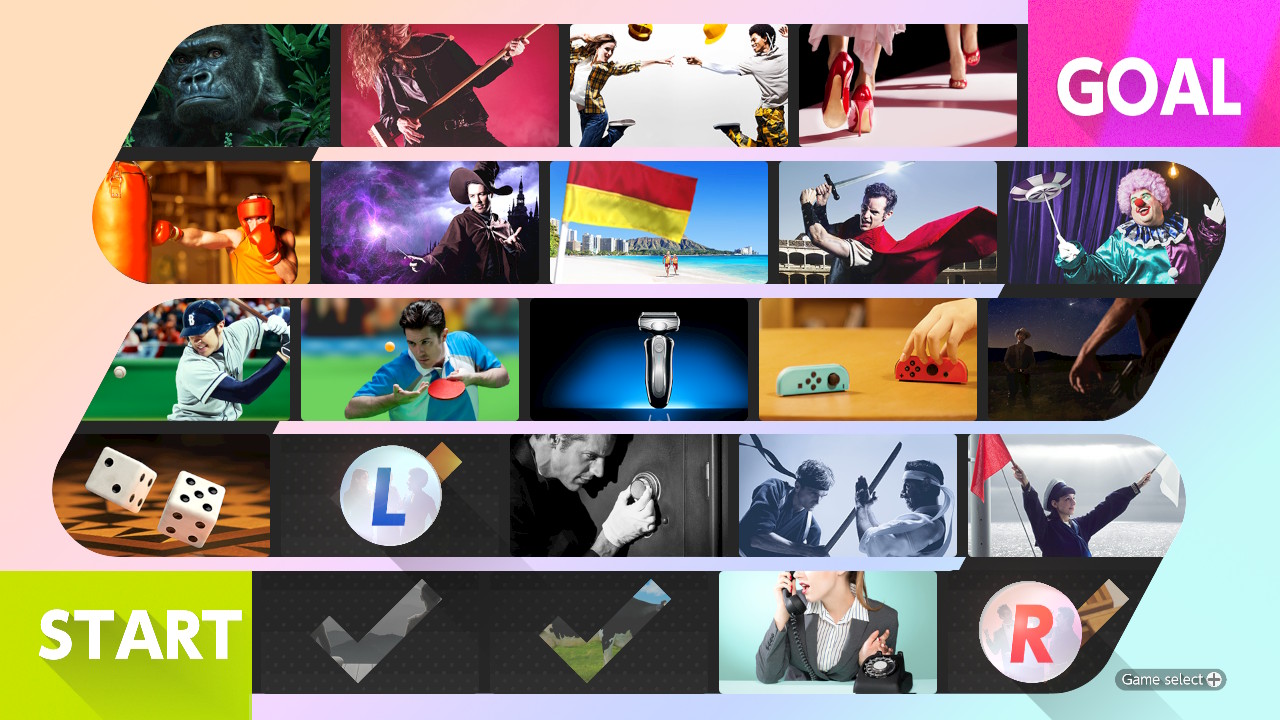 When all is said and done, 1-2 Switch is a great party game that gets players to do fun and silly interactions. While the price point is a bit high at $49.99, and it should have been a game included with the system, it’s worth it for the Switch player that takes their console on the go to various parties and social gatherings. It makes a great ice breaker for family events and even offers a fun time for friends that just want to mess with each other. It would help if it had more single player offerings, but the game is made with at least two players in mind, so it was clear that it was never meant for just one player. As long as it’s a purchase with a party in mind, this is well worth the price of admission.