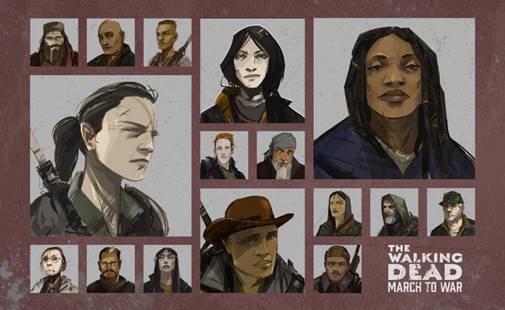 Disruptor Beam was recently excited to flesh out more details for The Walking Dead: March to War’s Survivor System, which, as one of the game’s core mechanics, allows players to build, manage, and command like-minded allies to survive the threats from both the dead and the living.

As you manage your camp, it is up to the Survivors to scavenge resources and complete missions for everybody to make it through the apocalypse. You can check out the official blog post, which features an interview with Senior Game Designer Michael Leoncavallo.

Disruptor Beam has also recently launched the “Survive The Walking Dead” contest, which is hosted on the official March to War Facebook page. In this contest, participants will have a chance to be immortalized as a Survivor, having their likeness incorporated in the game.

Finally, fans can join the Survivors mailing list, which keeps them up-to-date on the latest information, as well as grants them a captive Walker in-game at launch.

Are you excited to begin your war for survival?