MOBA style games are among the most popular genres in this generation of games, with many ranging from games like Heroes of the Storm to shooters like Battleborn. Every once in a while, developers take elements from the MOBA style to make new games that can feel very different. Lightbulb Crew did just that with their debut game, Games of Glory. Working like many “hero” type games, Games of Glory takes a unique cast of characters, placing them in various arenas to do battle. Player versus player matches can range from three to four players on each side, and teamwork is always encouraged. While these are still common features of MOBA games, the way Games of Glory plays is still pretty unique. 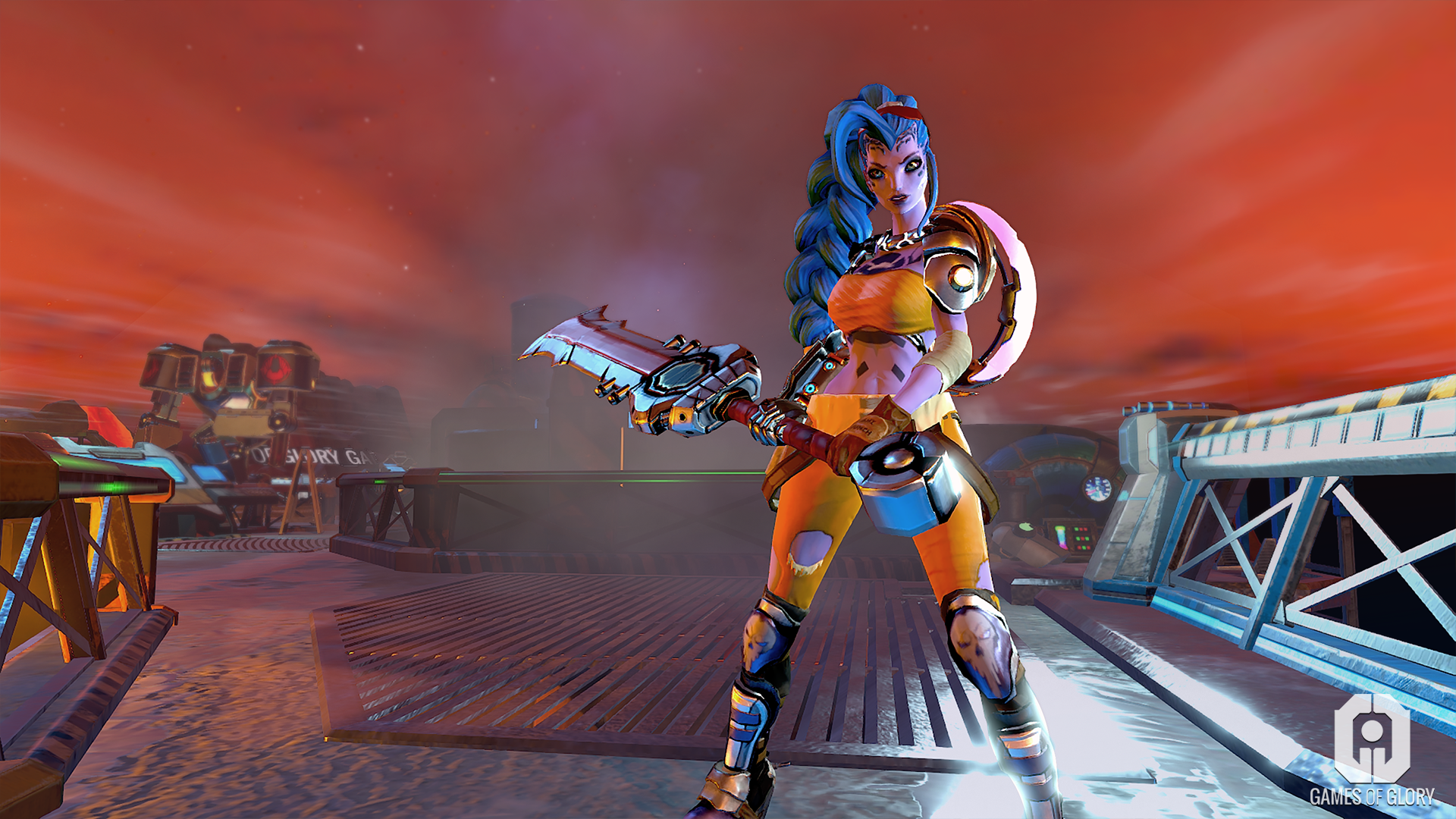 Games of Glory revolves around the universal ruler, The Synarch, as he governs his empire, the Synarchy, with an iron fist. Creating the Games of Glory, a futuristic gladiator battle, he has combatant clones fight for his own amusement. The combatants that emerge victorious get to take home the ultimate honor, as well as special privileges for their factions. Characters vary in appearances, coming in all shapes, sizes, and skill types as they offer unique styles of gameplay. How these characters work together in a team can make the difference between victory or defeat. With five character classes, including Tanks, Scouts, Assassins, Support, and Damage dealers, and with 50 non-character specific weapons and upgrades, players can really make a character their own.

One of the main challenges Lightbulb Crew wanted to tackle was the ability to play the game between both PC and PlayStation 4, creating a larger community for the game. Utilizing Clubs, players can join a public or private club and be able to link up with players on the other platform. These Clubs can also be customized a bit to have special team logos (giving a paid option for external assets), colors, and private game sessions. Each hero has a skin that utilizes the Club colors and logo as well, so the Club admin can control the way their members look using this skin. Using Clubs and a free-to-play model, Lightbulb Crew hopes to make for a popular option for players on both PC and PS4. 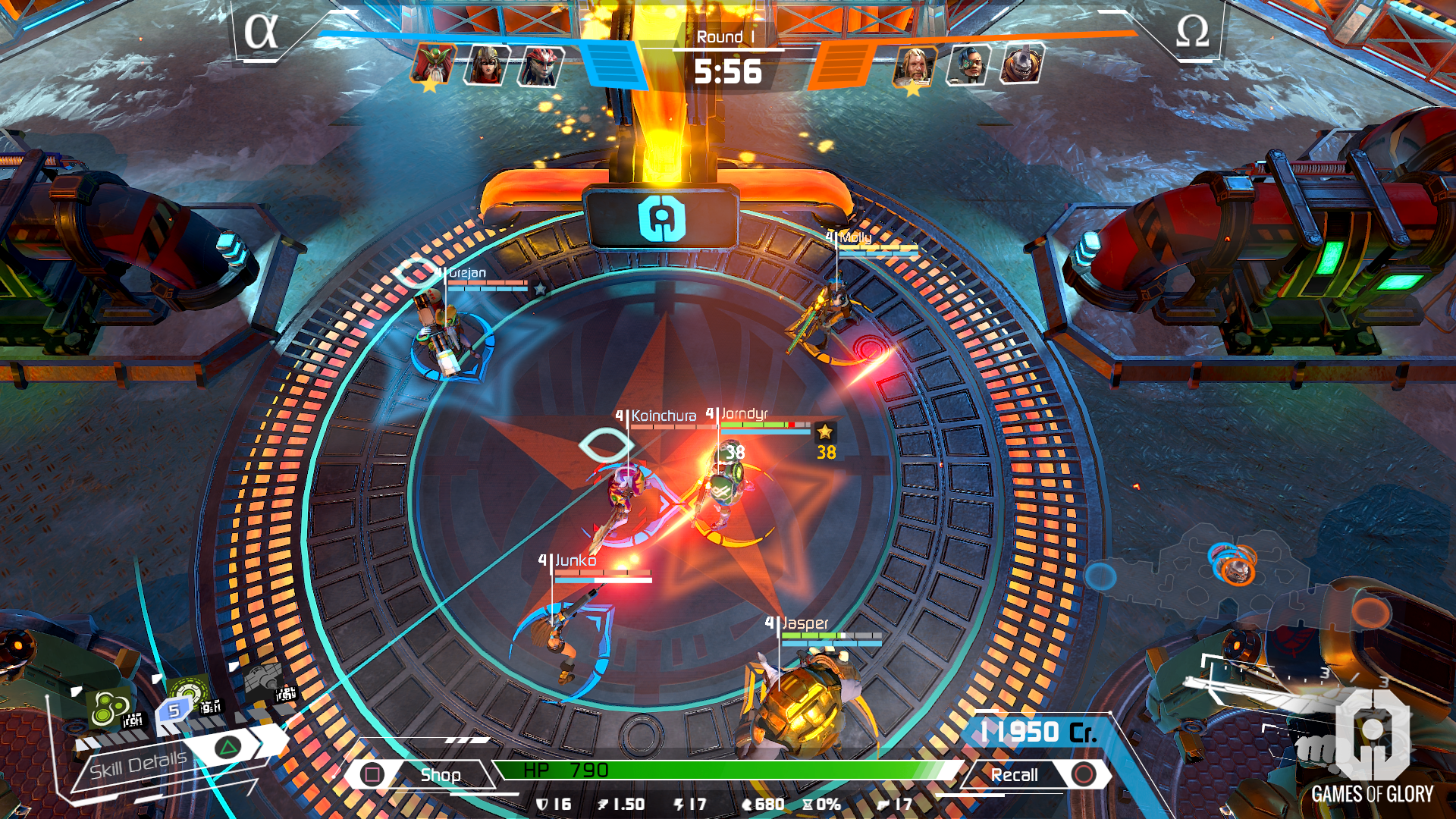 One way that makes the game feel a bit different is the way characters can be equipped with both different ranged weapons and melee weapons, making it so they can work together with their abilities. Each ranged weapon works very differently, some entry level weapons like the pistol or assault rifle, or advanced weapons like the sniper rifle. A good example would be combining the shotgun with the ability to pull enemies towards you with an ability, using the close range to deal devastating damage. Melee weapons can be good to use as well, as they often attack faster. Both types of weapons can be upgraded with in-game currency, giving damage boosts and up to three different add-on upgrades from a selection of six. Abilities can also be upgraded as the hero levels up during a match.

Another aspect that makes Games of Glory stand out is how it feels designed with a controller in mind, but players are still welcome to use a mouse and keyboard on PC. This isn’t typical for a MOBA type game, but it feels rather natural with a twin-stick shooter control scheme, using one stick to aim in the direction you want to attack, and the other for movement. Pulling the right trigger will attack with the currently equipped weapon while the other trigger and shoulder buttons are saved for abilities. Games of Glory keeps things rather simple as the face buttons are mostly used just for the UI and menus rather than combat. It definitely takes getting used to, especially navigating the menus, but after a couple matches the controls feel pretty comfortable for the gameplay. Using this type of control scheme, the game can still feel balanced between both PC and console. 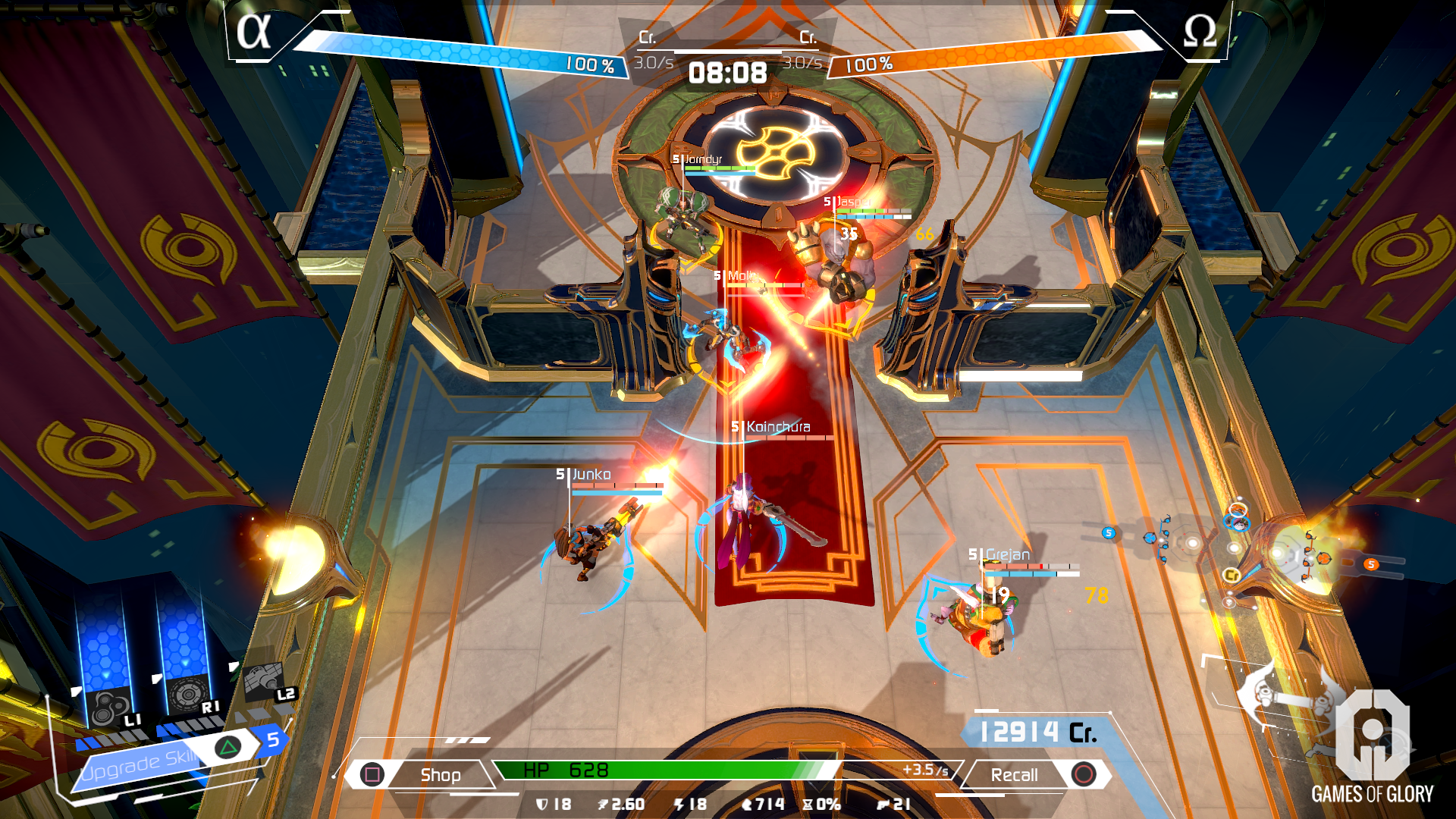 During my demo, I only got to try a handful of the characters available, but some of them had some pretty cool abilities. I spent some time as Shih, a cool assassin-like character that has a couple dashing abilities; one to help her either chase down opponents or run away while dealing damage, and another that can be used to create some distance while dealing damage and slowing down enemies. Her ultimate ability has several blades circling her in a short radius, dealing damage to foes that stand within range. This can be combined with certain weapons that push foes forward with a blast towards the blades, which can lead to devastating damage. Other characters had abilities like a shot that allowed switching places, placing healing fields to heal allies, protective shields to negate damage, etc. Characters have only three abilities each, but how the player combines them with their weapon choices and upgrades can determine how effective they are in battle.

Another character I played with was the scout Saga, who had a dashing ability as well, but also had proximity mines that would not only deal damage but would also slow down opponents. She has her ultimate ability that places down a roadway that boosts allies and also damages enemies on the path. Playing with this character, I used a sniper rifle to focus a shot on enemies slowed by the proximity mines, using the dashes to make quick escapes (think Tracer from Overwatch). It worked somewhat well despite being a very experimental run with the character. 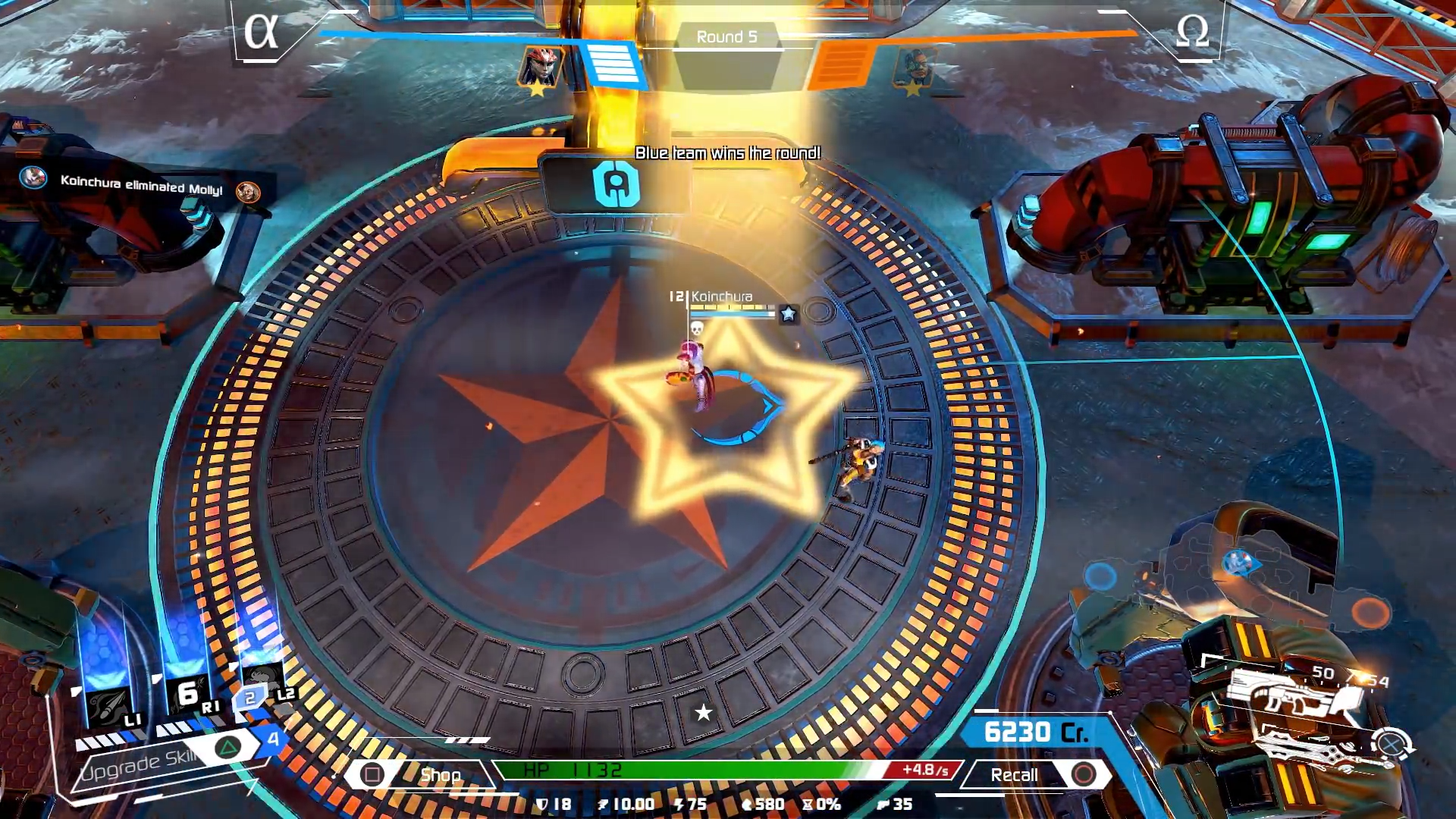 There were two game modes in my demo, both having their own unique goal for players to accomplish. Svandia has the game select a star player on both sides, and the goal is to defeat the target star player of the opposing team before they kill your own star player. The star player changes between rounds so it allows for different matches as players fight to protect their star. Ark is more like a MOBA mode, where players have to control points on the map and defeat minions to gain credits and experience for their characters. After keeping control of the points, players can take down the guard turrets protecting the enemy base just before their assault. It does away with the typical lane strategy and encourages teamwork to take down enemies and gain control of the points in the middle of the map.

Games of Glory still seems like a work in progress, but from a visual standpoint, it seems to be heavily improved from how it looked when it was first announced. The presentation feels like a gladiator match as roaring crowds cheer characters on and players represent their factions. Just getting cross-platform play working this early is already promising, and considering that it will be free-to-play, there is no reason not to give it a try. With a planned release coming up soon, feel free to keep an eye on the official site for updates, or even just to get more information on the story or characters.