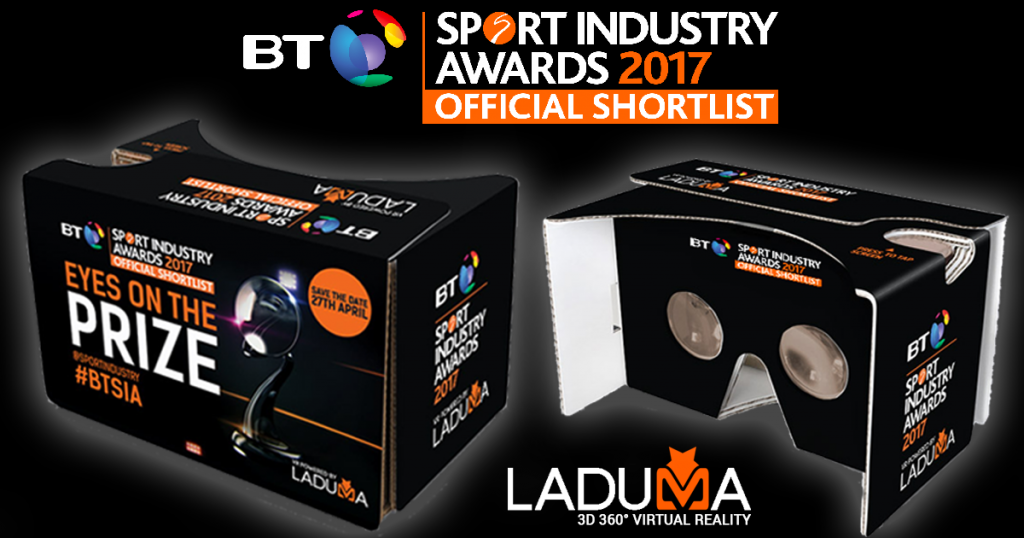 Laduma was proud to announce that their Virtual Reality technology will be at the heart of this year’s BT Sport Industry Awards with the Official Shortlist set to be revealed in a way that has never been seen before. Each of those shortlisted in 15 categories will experience an immersive piece of VR on a custom, branded cardboard VR headset.

Alex Coulson, Executive Director at Sport Industry Group, stated, “We’ve seen some fantastic use of VR within the sport industry over the course of the past year. Some of the best examples have been created by Laduma, who are experts in the space, and that made it an easy decision to not only incorporate Virtual Reality into today’s announcement but to partner with one of the very best companies in the business.”

Laduma has, over the past several months, created content for the Wimbledon Tennis Championships, various NFL teams, such as the Denver Broncos and Jacksonville Jaguars, as well as the LA Galaxy. This latest partnership with the BT Sport Industry Awards is also a chance for them to showcase VR to more top brands.

“We are proud of the work we have done with some of the biggest names in world sport over the past 12 months,” said Laduma chief executive officer Ben Smith. “We know all about the hard work that goes on behind the scenes and the recognition that deserves. So we jumped at the chance to create an experience, which helps to celebrate that endeavour and creativity. And we are excited to be able to bring our 3D 360° VR to help create a truly memorable announcement for such a fantastic awards ceremony.”

Those interested in checking out the 2017 BT Sport Industry Awards can do so on April 27 at Battersea Evolution in London.