Reinventing the wheel isn’t always easy to do with a video game franchise, as many tried and true formulas don’t always translate with the conversion process. Sometimes it works fantastically, like Metroid to Metroid: Prime, or Final Fantasy to Final Fantasy: Tactics. Other times it doesn’t exactly work, often being left as a one-off experiment to be forgotten by the masses. Resident Evil is a franchise that has tried adapting survival horror to a new status quo once before, as Resident Evil 4 started a more action-oriented focus. Capcom is again trying to change things up with the series, but this time taking more inspiration from the earlier games in the franchise. Resident Evil VII: Biohazard represents a successful translation, marking the first entry in the main series to have a first-person perspective (and technically their introduction to the first-person shooter genre). 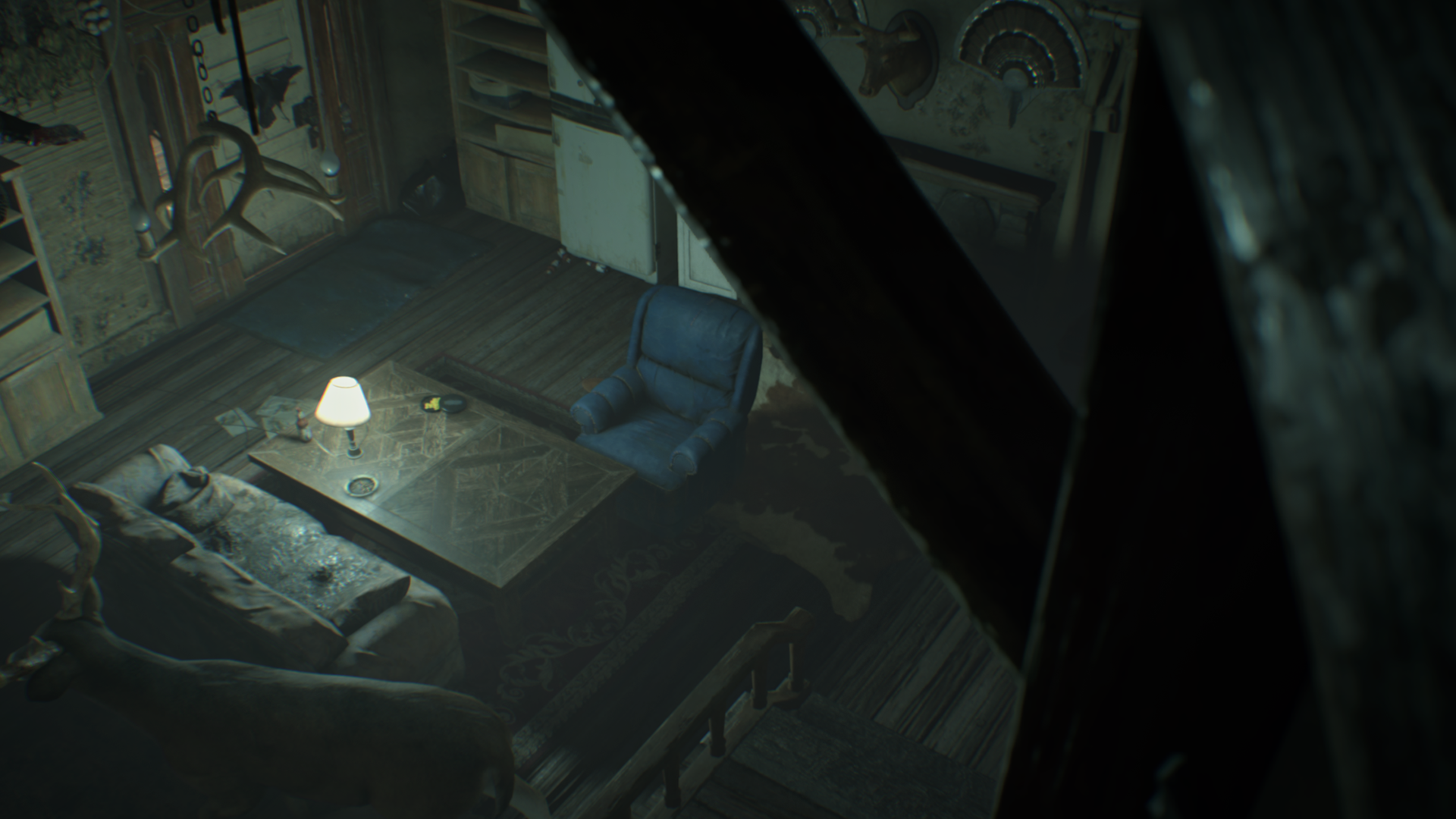 Taking a lot of inspiration from the first Resident Evil and even the predecessor for the franchise, Sweet Home, Resident Evil VII takes the player into the Baker estate, a Louisiana property sitting right on a murky swamp. The environment upon first arriving could be considered one of the best looking in video games to date, looking practically like it came from a photo. It really helps sell the swamp setting, with lots of overgrown foliage, flood-damaged pathways, and a home that really feels secluded from the outside world. Taking control of Ethan Winters, players will experience this from his eyes and start to truly get immersed in this world, which doesn’t take long to grow unsettling.

On a quest to rescue his wife Mia, who has been missing for three years, Ethan soon realizes how complicated that task becomes after he explores the guest house of the property. Roaches, mold, flies and more make the owners seem like poor housekeepers, sure, but Ethan soon discovers more disturbing sights which reveals the severity of his situation. Ethan unknowingly becomes the newest guest of the Baker family, a deranged group of individuals that have been involved in several missing persons cases for some time now. Jack, Marguerite, and Lucas Baker make for an interesting set of adversaries, continuing the disturbing vibe and taking crazy to a new level. The main house where most of the time is spent seems significantly less grimy than the guest house, but it still maintains a creepy setting with other small details. 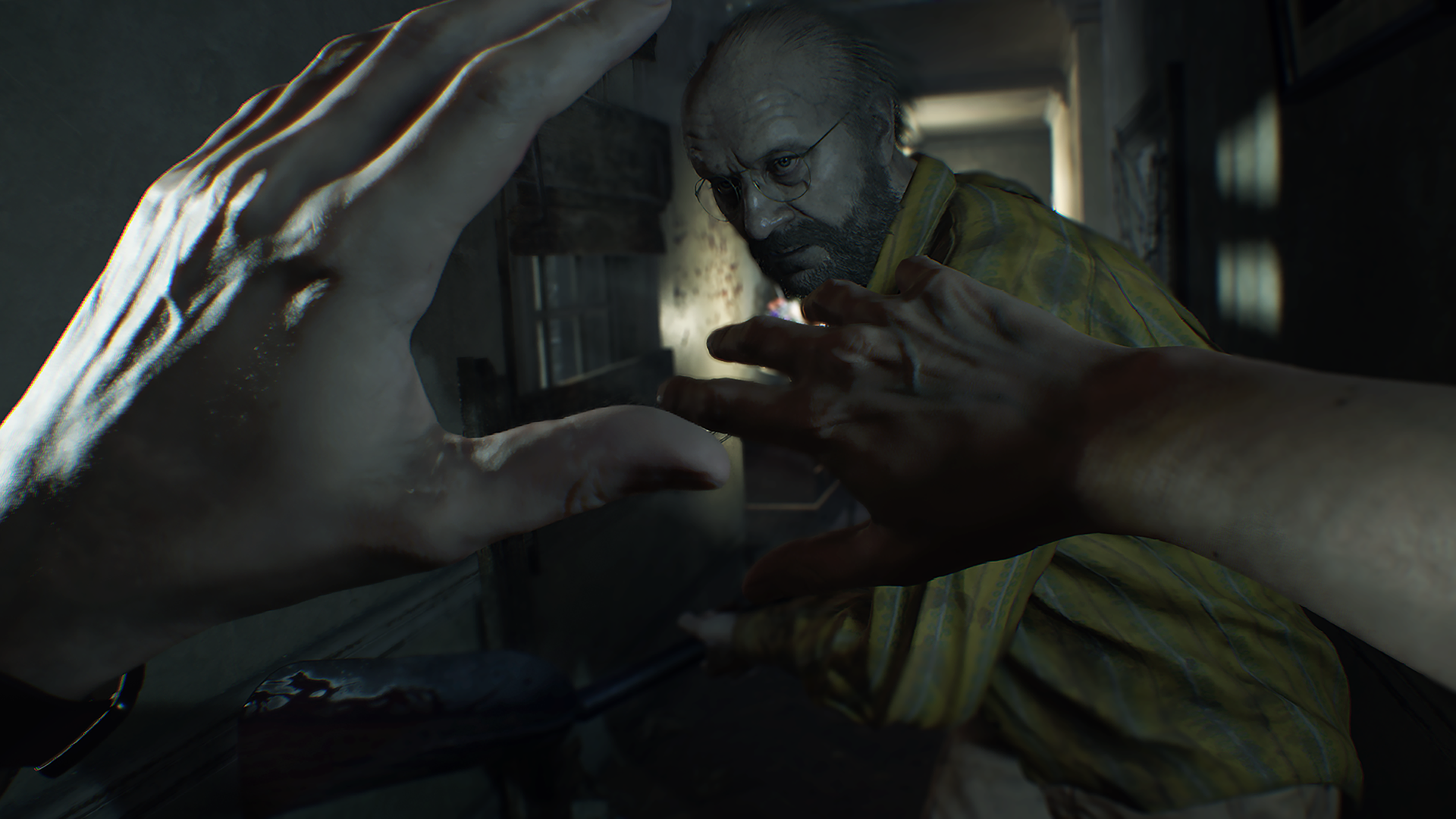 The game definitely gives off a Texas Chainsaw Massacre feeling to the atmosphere, especially with Ethan being more of an average guy than a trained operative. It adds a sense of vulnerability that makes scavenging for weapons, health items and such vital for survival, especially when up against the seemingly invincible Bakers. When Jack or Marguerite Baker are patrolling to find Ethan, it creates some of the most intense and chilling moments of the game. Even when not dealing with them though, the house itself makes for a haunting lifeform in itself. With some spine-tingling music that tenses up just to put the player on edge, the music goes dead silent just to hear the detailed sounds of the home. The sound design is truly superb, giving off a rich atmosphere of unexpected noises and things that go bump in the night. This is only amplified for players that decide to go in with a nice headset to fully immerse themselves in the creepy audio.

Getting to the gameplay, there are a lot of new elements to this entry in the series. Gone are reaction commands and quick-time events, as players are left with the ability to block, crouch, and to an extent, even hide. Resident Evil VII takes more of a stealthy approach, making it sometimes more valuable to run and hide from enemies than to face them head on. The offensive tactic can still work, but the challenge is in the risk of wasting ammunition. Even so, hoarding ammunition can come back to bite players as inventory space is limited, calling back to the older entries in the series when inventory management was valuable for progress. Puzzle items, certain weapons, materials for crafting; all of it takes up limited space and can mean players have to choose what they carry with them wisely. They might stock up on ammo for a threat ahead but then they’ll realize they didn’t have enough space to pick up the puzzle item or weapon in front of them. It takes a little conservation to figure out the best way to progress with efficient item usage. 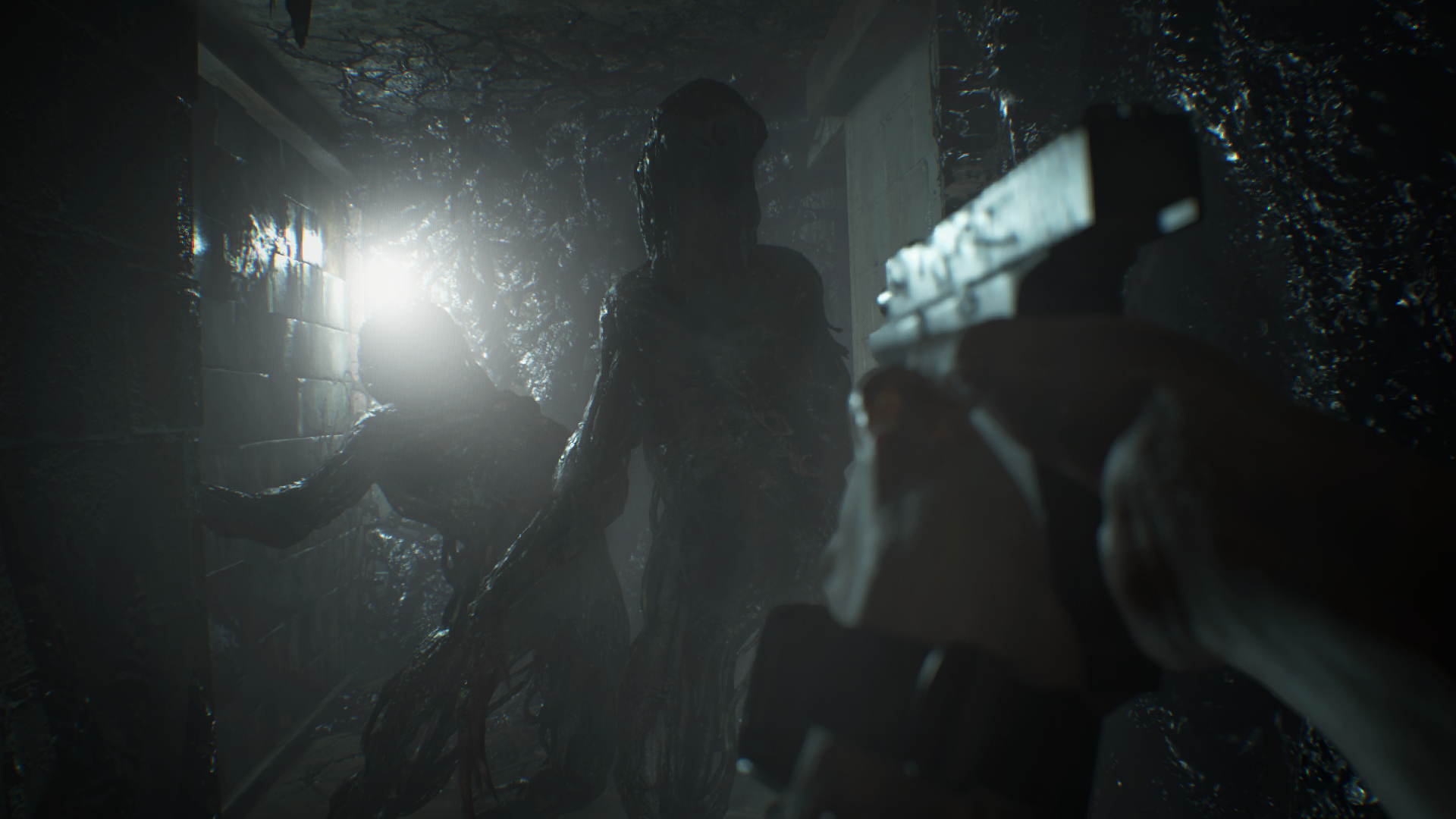 Combat is about what one would expect from a first-person shooter, with some minor differences. Players can aim and line up their shots with the various guns in the game, and some of them even offer the ability to switch ammunition types. There are very few melee weapons in the game, but Resident Evil fans will definitely be more than familiar with using knives to get out of sticky situations. Knives can be used to slash about, opening item crates, destroying Mr. Everywhere bobbleheads, or even precisely stab a foe in the face. Since there aren’t a lot of different enemy types in the game, it can start to be less tense as players build up their arsenal, especially against the more common enemies, the Molded. There are still a couple exceptions with the Molded, as there are variations of them and they do throw a few curve balls at times, but the true thrill is when fighting the individual Baker family members in fantastic boss battles.

While combat has changed a bit, this entry in the series marks a true return for puzzle solving, and while some puzzles are pretty simple, there are a handful of moments where there is a real sense of discovery. Some puzzles involve rotating various objects to make shapes with the shadow while others might involve a series of steps to escape a room. Even if some of the puzzles involve taking an item to a specific point to progress, the fact that the Baker household is riddled with complex locks and secret passageways shows promise. There is a little more content releasing for the game, and already it seems that puzzles have a bit of a focus on some of it. Hopefully these ideas continue to the next entry in the series. 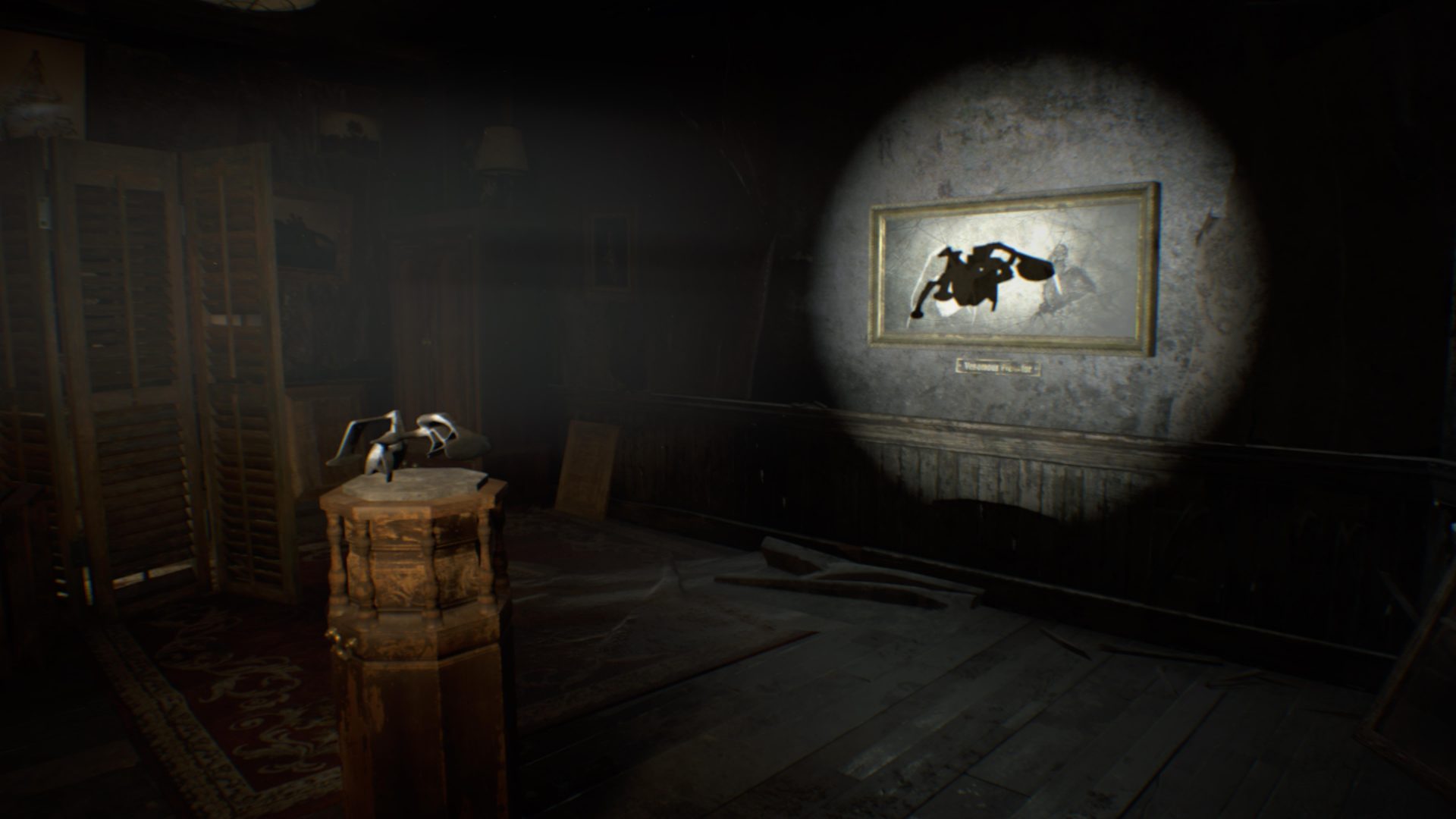 The game will last average players around eight hours or so, though some fans will probably finish it around five hours on their first run. Resident Evil VII has a pretty solid pacing that makes objectives easy to prioritize, and players that have a good memory can get rewarded with added extras early on. Obtaining certain keys and items can gain access to new areas if players memorize the out of the way sections of the game, and taking the time to revisit them can reward the player with more powerful weapons or upgrades. The game has excellent pacing and even though manual saves are limited to using tape recorders, the game still gives auto-saves to make things a bit easier for players to take breaks. While some might see it as too easy, it helps in key moments when the story takes a front seat and takes players through moments that make save rooms few and far between. This mostly comes in handy later on in the game, after a change of scenery.

Speaking of that change of scenery, the moment the player leaves the Baker family home, the pacing changes drastically. It has an admirable purpose, as it reveals a lot of the plot points that up until this point, were hiding behind a shroud of mystery. Even though this latter part of the game isn’t as intense as the first part, the revelations that come from it make it worth it for the overall experience. Regardless, it could’ve easily followed the same pattern as the first Resident Evil game in setting changes for what would likely have the same effect, but it does leave for a much more interesting ending regardless, as it connects to the rest of the series fairly well. Speaking of endings, the game offers two, which makes for a good reason to play through the game again, perhaps on the significantly crazier Madhouse mode. 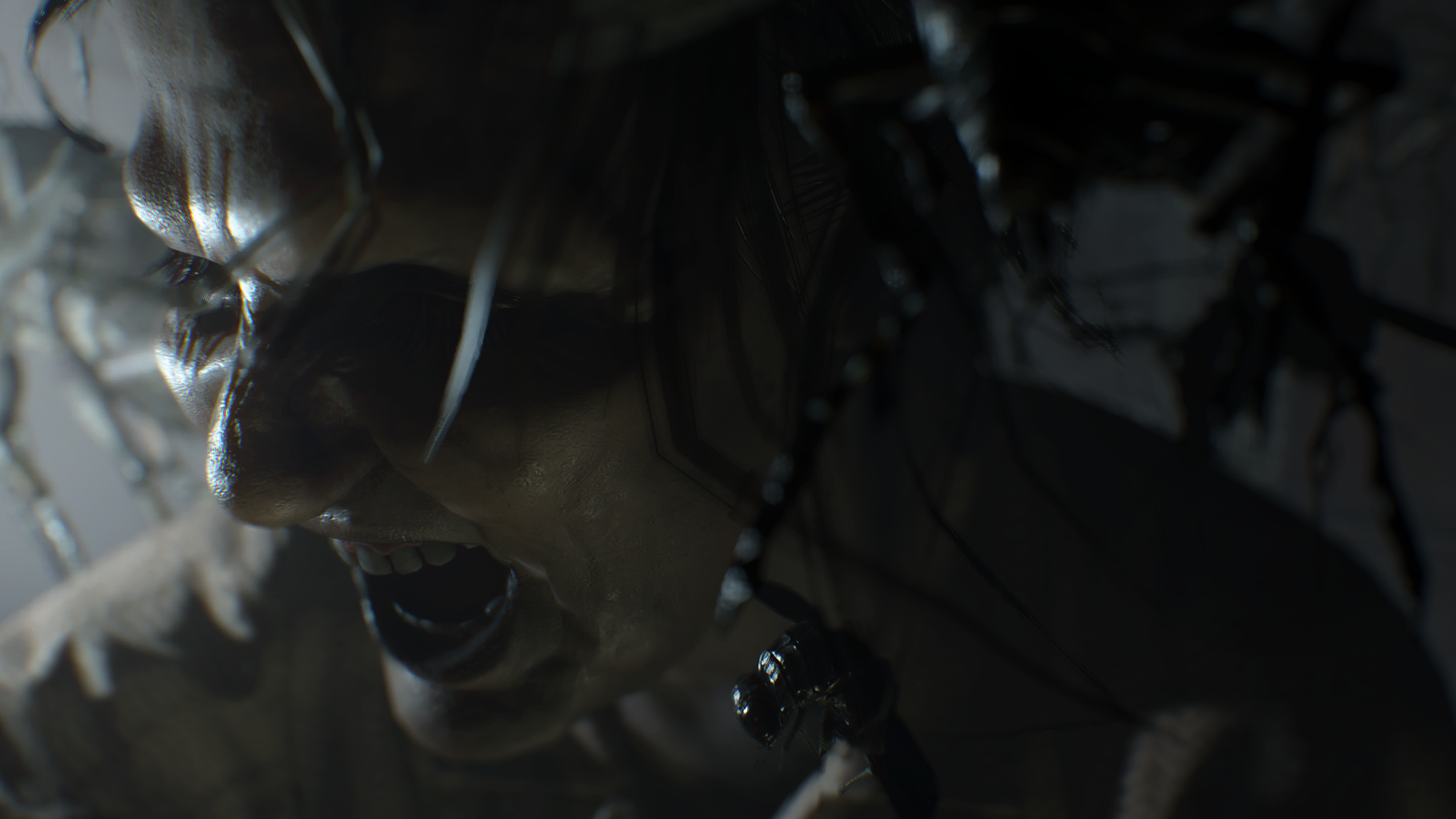 Getting to the PlayStation VR, it truly does immerse the player in the game further, becoming the definitive PlayStation VR experience on the market. Capcom offers a lot of options for all types of players too, allowing for more steady movement, different camera speeds, and even a couple options for crouching (an issue that I had when I first played the game in VR at last year’s E3). Combining it with surround sound headphones, even the toughest players will likely be on high alert. It’s nice that VR players even have a little incentive, as they’re even able to look from behind cover by tilting their head to the side, something that proves useful in particular moments in the Baker home. Hopefully Capcom can find more ways to make interesting AAA titles for the PlayStation VR in the future.

While Resident Evil VII: Biohazard has a slight hiccup with pacing towards the end of the game, it still provides a great experience that truly brings the survival horror aspect back to the franchise. It’s interesting that Capcom took such a departure with one of their biggest franchises, especially given the direction the series has been going with for the past few titles. Even taking away multiplayer was an interesting move, due to it being a popular feature from the last few entries. Regardless of the change, it was likely for the best, as having a partner character around removes all the tension from a horror game. Their gamble definitely paid off, as this change will likely bring back a lot of fans of the earlier games in the series.