Computer Role-Playing Games, or CRPGs, are a bit of a dying breed these days. What used to be incredibly commonplace in the early years of video games has become much more simplified, eliminating many of the defining features almost completely from a gameplay standpoint. Many CRPGs were based on classic tabletop ideas like Dungeons & Dragons, meaning there would typically be an immersive story, complex choices, replayability, and chance-based actions. Some games still use these elements, like the Deus Ex or Fallout franchises, but they put a focus on the combat that plays more like a mainstream video game. Planescape: Torment, a cult favorite CRPG from 1999, used the rules in the traditional sense and due to this, it is considered to be one of the best CRPGs of all time. Now, in 2017, the spiritual successor, Torment: Tides of Numenera, is gearing up for release for fans to relive a similar, but all new experience from the team at inXile Entertainment. 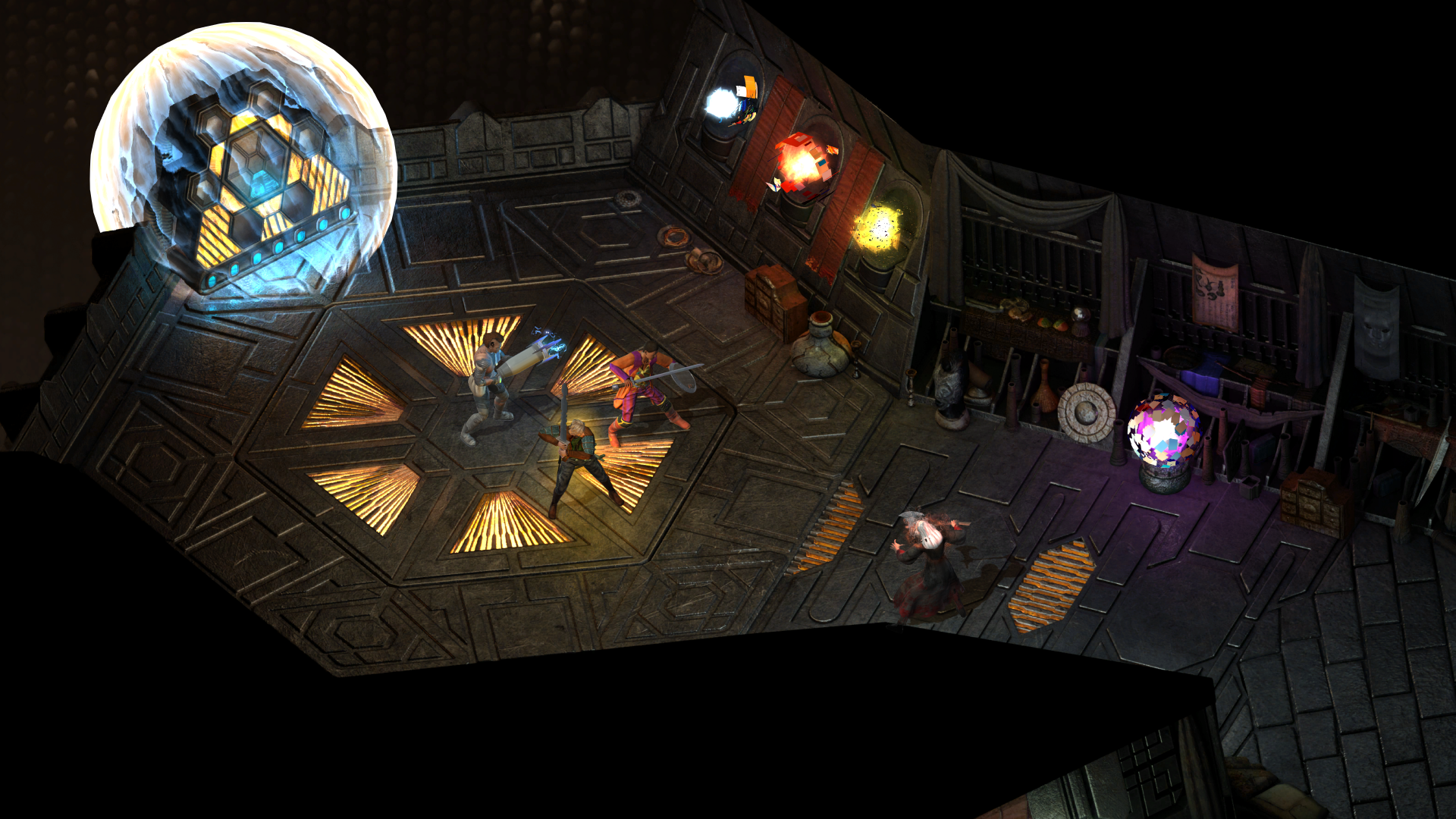 Torment: Tides of Numenera is the result of an incredibly successful Kickstarter, having made its goal in six hours back in March 2013, and concluding with over four million dollars in funding. Though it was originally slated for release at the end of 2014, adding in the stretch goal content and developing the game for Xbox One and PlayStation 4 ended up delaying the release to February 2017. InXile Entertainment decided to utilize Monte Cook’s Numenera game, another successful Kickstarter product, rich with stories to tell and adventures to unfold in its Ninth World setting. First and foremost, this is not a story about saving the world, but instead a story about the player character and the decisions they make to achieve their end goal.

Players take the role of the Last Castoff, a sentient husk that was once a body of the Changing God. The Changing God is a seemingly immortal being, transferring his consciousness from one body to the next, each previous body becoming a sentient being known as a castoff. As the Changing God transfers bodies, he gains new abilities, much like Apocalypse from the X-Men franchise. The Last Castoff, having no memories of ever being the Changing God, now embarks on a quest to discover their purpose, struggling with the fact that others know him or her as the previously immortal being. This is just the beginning of the deep narrative that Torment offers, and players are given plenty of choices regarding how they evolve their character. 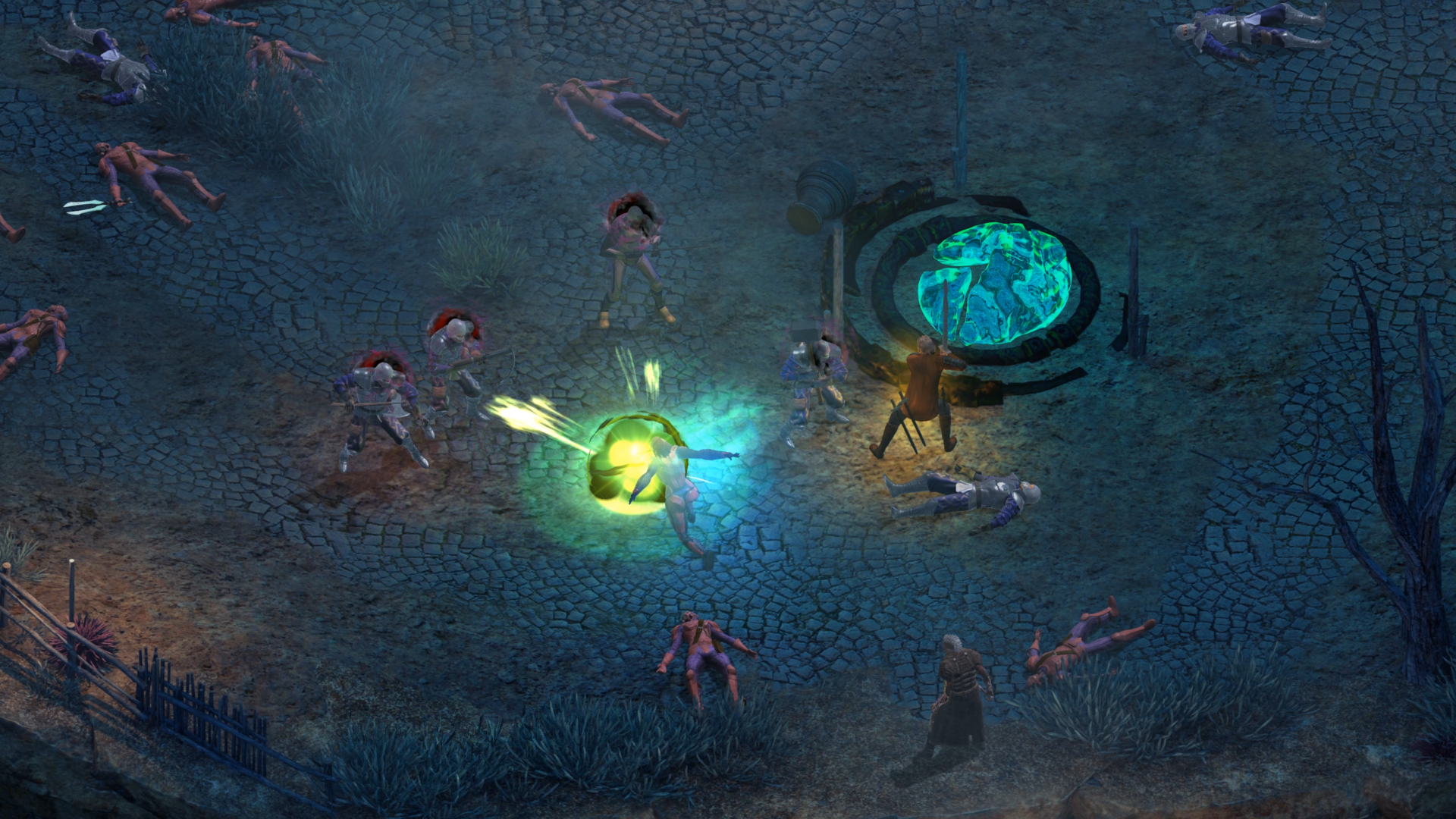 The Ninth World is a setting that takes place one billion years into our future, the artifacts known as numenera being left behind from previous civilizations, granting various powers and resources. With such a fantastic setting, the world is ripe with potential for storytelling, made even deeper with the choices of the player. InXile wanted to make it so that the choices mattered, so they filled the game with tons of branching paths that all feel consequential. They also encourage seeing things through, as many choices will end with death, but instead of resetting, the player should continue to see how that choice effected the story. The Last Castoff has a special form of death, where instead of permanently dying, they fall into a world inside their mind called the Labyrinth. From this world, they are able to speak to people from past memories, reveal new secrets, and even re-enter the Ninth World. It adds a nice little twist to the typical formula for games where the main character fails a challenge.

Getting to the demo, inXile was kind enough to fill in some exposition to set the stage for the part of the game they were showing. Taking place about 20 hours into the game, the Last Castoff (female in my preview) found herself in a place called the Bloom, an inhabited creature that connects to other worlds and dimensions using tendrils to open various portals. The Last Castoff was being pursued by The Sorrow, an ancient being that is set on destroying the Changing God as well as all of his castoffs. Waking up shortly after entering a portal connected to the Bloom, The Last Castoff is met by Dracogen, an information broker that offers to help her on her quest, but at a price. Joined by the jack Matkina, another castoff, Erritis, an enthusiastic glaive, and Callistege, a dimension-shifting nano, the Last Castoff is soon seeking to gain an audience with the Memovira, the Leader of the Bloom. I use these class names for the other party members but I honestly never got a chance to understand them until after my demo. 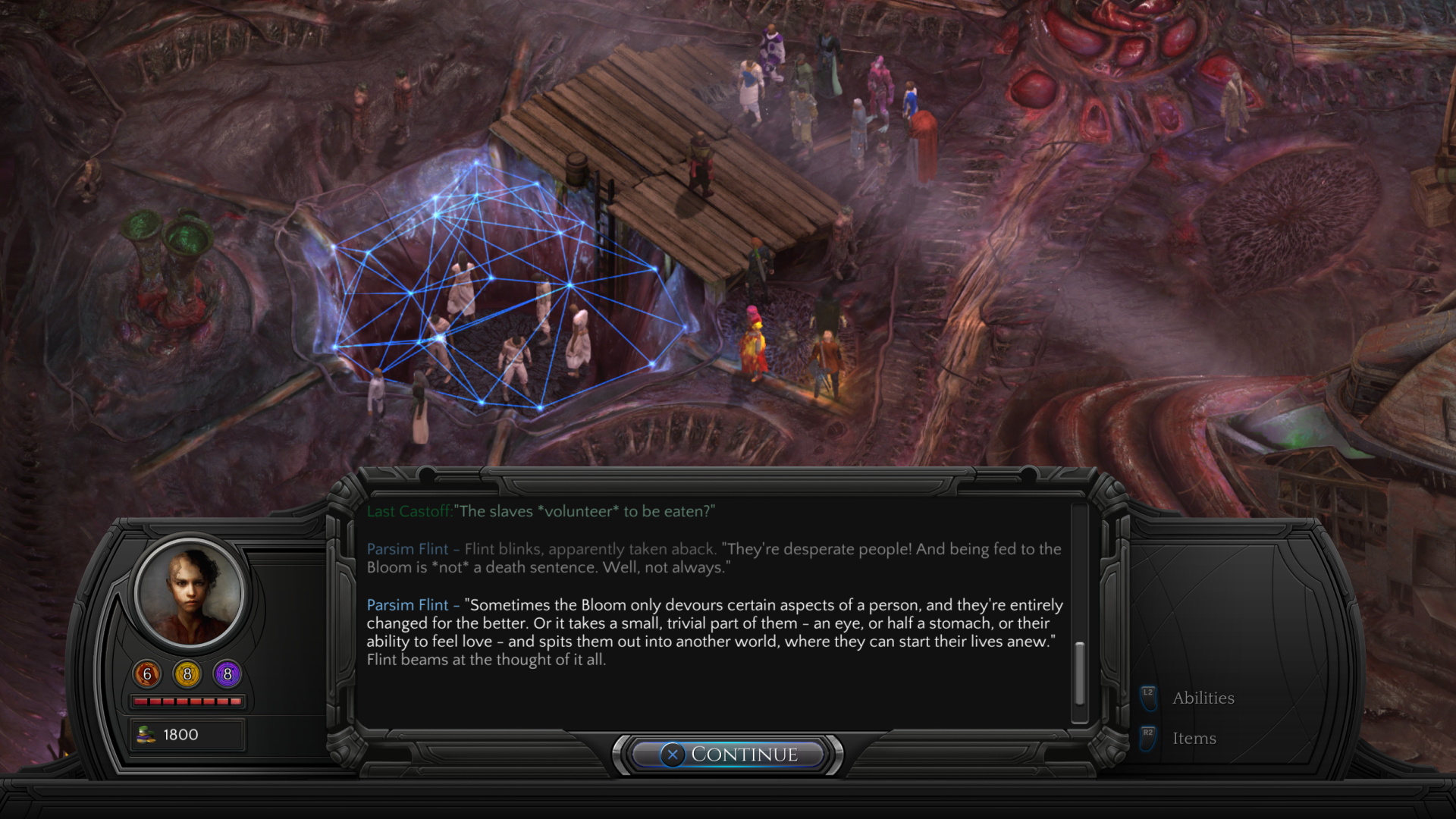 Dracogen offers a way to meet the Memovira, but only if the player chooses to get him the Magmatic Annulet, a rare artifact that he seems to have misplaced. The game gives very detailed descriptions of the characters and surroundings, allowing the player to make the ultimate call on what they should do. Should the player choose to trust Dracogen, then they may find themselves soon on a quest to recover an artifact. Even with the main quest, there are still plenty of characters to speak with to gain new information, build the world, and even gain side quests. One such quest involves tracking down a couple of street thugs that bully a local innkeeper, though innkeeper is a strong word considering she merely had a tent for travelers.

Following the trail for the side quest, I entered an area where a group of mutants were threatening the Memovira’s guards. This gave an interesting display of “combat”, but instead of fighting, I opted to persuade the leaders of both groups not to fight. It all happened in turn-based combat, with each passing turn, the leaders growing more hostile while I used my characters to attempt calming them down, sometimes using intimidation to scare them. Realizing the consequences of a battle, they ended their quarrel, allowing me passage to my goal. It was great to be in a battle that didn’t actually involve any fighting, as most RPG’s wouldn’t make these moments as part of an actual battle. Finding the street thugs known as Delny and Vrung, it becomes obvious what’s going on between them, as the dialogue can reveal that Vrung is merely a self-obsessed boy with anger issues. The game offered a chance to strangle him, giving a 15% chance that I took and surprisingly succeeded, defeating Vrung and finishing the main task of the side quest while opening up another. 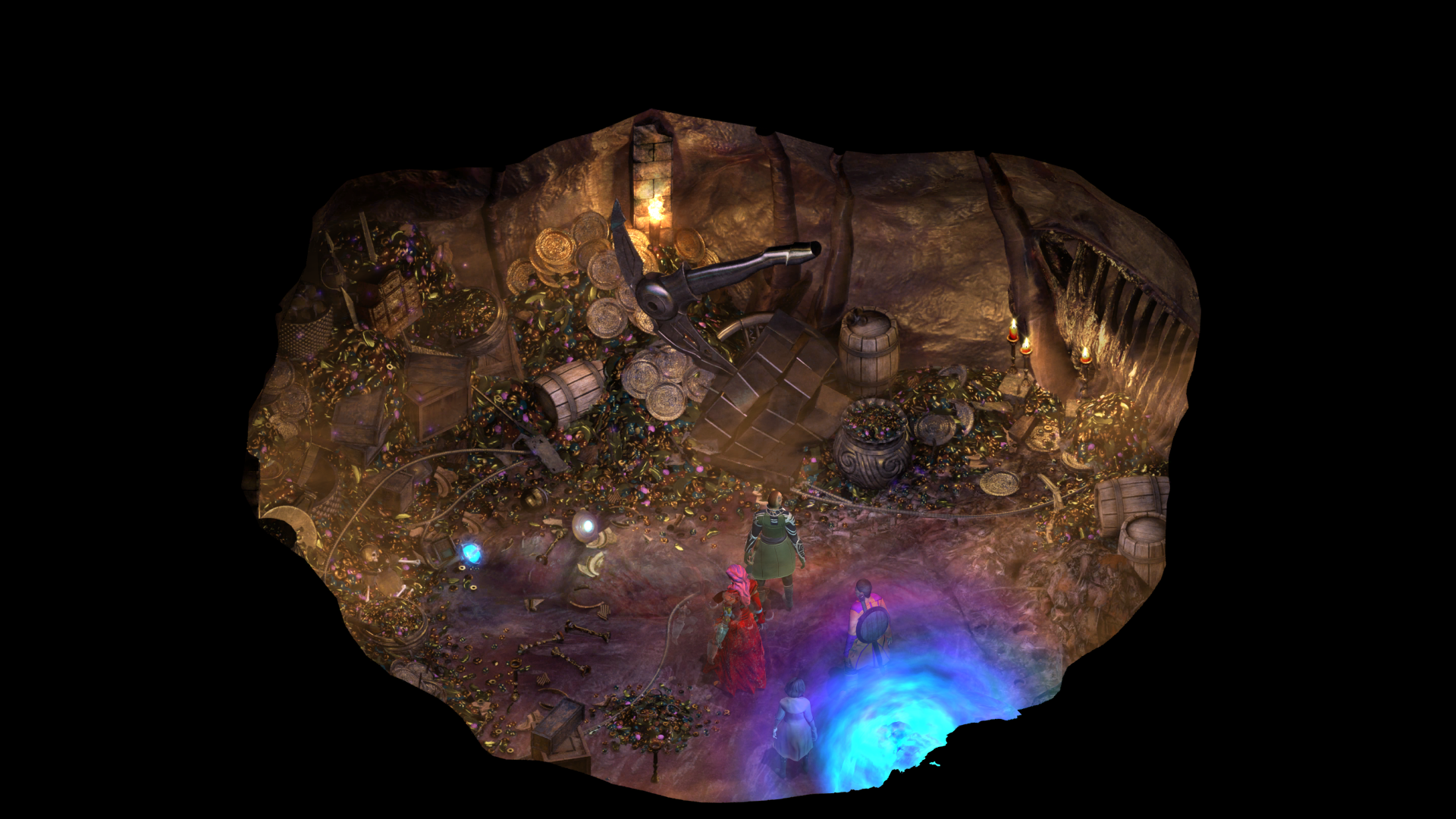 It’s quests like these that help make this world more immersive and involves the player in more than just a common distress situation. Most situations can be solved without using any real combat, though upon recovering the Magmatic Annulet, I did encounter just one combat scenario. Since this was the first official scenario where I was fighting, it took me a little time to figure out how to successfully battle. Characters stand around the map and have to move within range to attack opponents, getting bonus stats for flanking from behind. Players can spend points from their intelligence, speed and might pools to increase their chances of hitting opponents, dealing more damage, and even add bonus effects. It makes it feel very much like a tabletop game, using a resource to improve your odds, making it feel like a virtual dice was determining my fate. It only took until two of my allies were incapacitated to figure this out, but once I did, I managed to succeed in battle against what felt like extremely powerful foes before I realized how the battle system worked.

I managed to bring the Magmatic Annulet to Dracogen, finishing my main mission after a good two hours of exploration and questing. Torment offers quite a lot of depth and each choice made can drastically change the way the story plays out, as well as how the characters progress. While I never quite figured out the way the inventory system worked, I figured these would be things explained early on in the game. The other members in the party seemed rather interesting, even without knowing any of their background information from what would surely be a detailed introduction from earlier in the game. It’s clear that the game has more to discover for fans of a deep RPG, especially with different character classes, other playable characters, and what looks like a plethora of choice options. 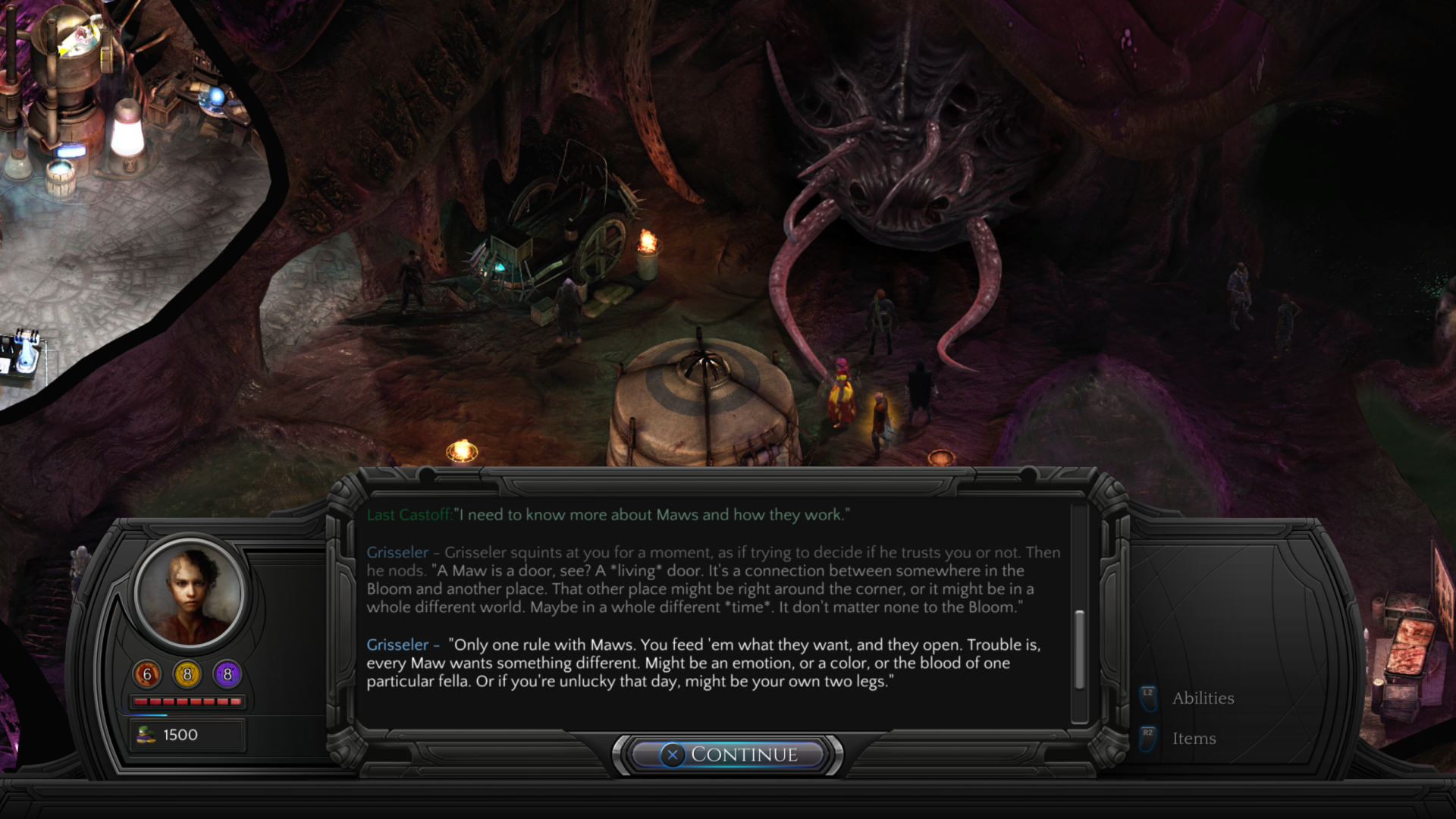 While I enjoyed my time with Torment, it is worth mentioning that playing the Xbox One version had a couple minor issues. Controlling the Last Castoff when running around the world had an odd feeling of innertia, never feeling as precise as I wanted as the character would move just a bit further than where I intended. It was also a bit off whenever I tried to interact with something, as it felt like the game didn’t respond well to selecting objects or people. Sometimes it would take a couple tries just to get it to properly interact as it seemed the character had to be in a certain position before the interaction would take place. Luckily the character would usually move in the right position upon pressing the interact button, but it would still take a couple tries sometimes. I’m not sure if the PC or PS4 versions have this issue, and it’s very possible these will be ironed out by the time the game releases next month. Hopefully inXile is aware of it and can polish what is sure to be a classic gem.

Torment: Tides of Numenera seems to be a great calling for fans of tabletop games or deep stories where they have a say on how the game unfolds. In just the two hour demo, I would probably say this was the most choice filled game I’ve ever played. Given the isometric view and the incredibly detailed environments, it felt like a nostalgic adventure from the 90’s, but given a fresh coat of paint and updated presentation. I feel like inXile Entertainment intended for it to feel like this, and it’s definitely a good thing as like I said before, CRPGs are a dying breed. Hopefully the fans that wanted to see this project come to light will enjoy it, as it was clear that the game was crafted with a ton of creative ingenuity with fans in mind. Torment: Tides of Numenera releases February 28th for PC as well as Xbox One and PlayStation 4.