The Game Capture HD60 and HD60 S look almost identical: a box roughly the size of a credit card and thickness of a flash drive. Painted matte black, there are no buttons, just ports: HDMI In/Out, USB to connect to the computer, and a 3.5mm jack for a microphone. It also pulls all its power from USB, so there’s no power adapter or wall outlet necessary.

Both Game Capture cards work with most devices that uses HDMI (except the PS3 because of it’s HDCP proctection). I’ve streamed Playstation 4, PC, and NVIDIA Shield gameplay, all with little configuration. You can use Elgato’s software, but the Game Capture HD60 cards also work with software like GameShow, and the free, open-source OBS. If the card acts up, it’s generally nothing a quick unplug/replug won’t solve. The card includes an HDMI cable and a USB cable: either 2.0 for the HD60, or 3.0 for the HD60 S.

For console gamers, the benefits of an external capture card are pretty clear. The PS4 and Xbox One both allow you to stream right from the console, but the presentations are minimal. Neither allows usage of overlays, custom graphics layered on top of the gameplay, and they limit recordings to 15-20 minutes. PC gamers can use free software like OBS to record and stream, but this puts extra stress on the computer. The Game Capture HD60 and Game Capture HD60 S take strain off of the computer by processing the video externally, leaving more power for gaming. But even though the HD60 and HD60 S look similar, they do have functional differences.

The traditional HD60 is best for lower-end computers and for recording, while the HD60 S is tailored for streaming. Both cards allow 60 fps, 1080p recording and streaming, but the HD60 takes longer to send the signal to the computer.  The HD60 S pushes more processing to the computer, utilizing USB 3.0 for faster transfer speeds. This needs a stronger computer, though: where I streamed in 1080p with 60 fps with the HD60, I dropped to 720p to keep a steady frame rate on the HD60 S. This shouldn’t bother those with monster rigs, but it’s worth keeping in mind if you’re close to the minimum system requirements. 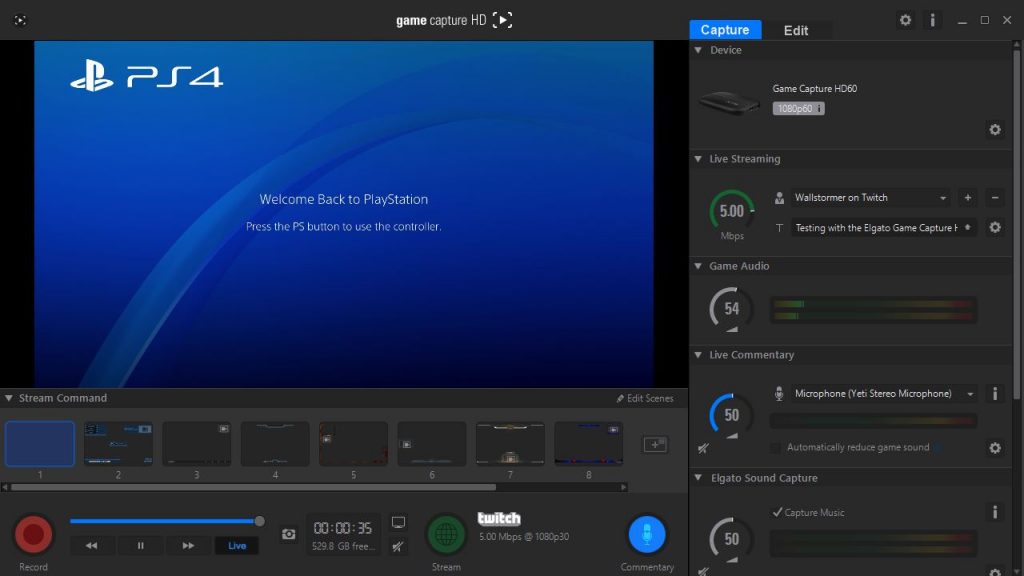 The included Elgato Game Capture HD recording software allows easy recording, streaming, and commentary. It automatically detects the capture card, webcam, and microphone attached to the computer, using simple sliders to customize game and mic volume. Streamers can store accounts for multiple services including Twitch, YouTube, Facebook, and more. Switching between accounts or microphones is as simple as picking a drop-down option. For those using custom overlays, the Stream Command sections stores up to 10 different wappable scenes. Users can customize each scene with graphics, linking hotkeys to switch on the fly. I’ve noticed a bit of lag with scene changes, but prefer Game Capture HD’s simplicity to OBS in common situations.

When things get complicated, Game Capture HD tends to crash a bit more often. I’ve encountered the most struggle when using the Elgato Sound Capture section of Game Capture HD. It catches team chat, background music, or just overall PC gameplay audio with the press of a button. Still, it tends to lock up the capture card if I load it mid-stream. I usually have to unplug the card and reboot the software when that happens. So far, opening Sound Capture before starting my capture has cut down on those crashes.

Regardless of whether you decide to use Game Capture HD or other software, the Elgato Game Capture HD60 and Elgato Game Capture HD60 S are some of the best capture cards on the market. I wish they included the Chat Link cable: buy one if you plan to use headphones or do console party chat. Even so, the simple setup and usage of the HD60 and HD60 S let you focus on your broadcast or recording. At $179.95 US they’re not cheap, but they’re stellar investments for anyone looking to take their gameplay videos to the next level.