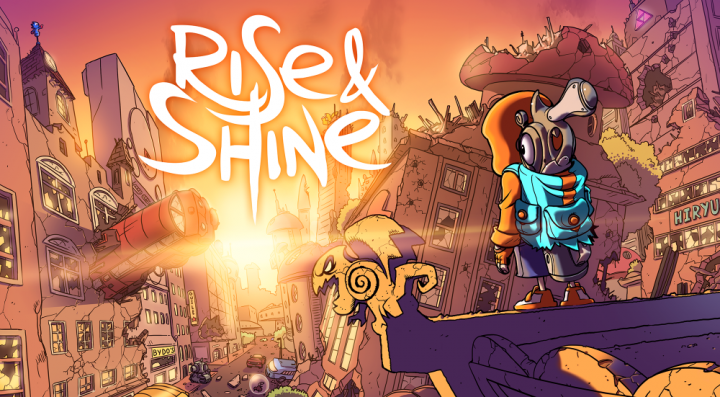 Adult Swim Games has a track record for publishing slick, polished platformers. Super House of Dead Ninjas stays in my playlist, and and Super Puzzle Platformer Deluxe blends Tetris Attack-style block matching with a shooter in ways I can’t help but love.  You can add Rise & Shine by Super Awesome Hyper Dimensional Mega Team to that list, even though it doesn’t quite stand as strong. Rise & Shine is a fun, tough platformer with tight mechanics, crisp visuals, and a great difficulty curve. It’s biggest problem is really that it just doesn’t do enough of many of the things it does well. The story, item selection, and even the game’s length itself all leave you begging for more at the end with no promise of fulfillment. Still, for folks who want a solid, 2-4 hour long action game, or are looking for a new speedrun challenge, it’s time to pick up Rise & Shine.

You play as Rise, a young boy living on Gamearth: a cartoony, colorful world where all the heroes of old-school gaming live. But it’s invaded by Space Marines from planet Nexgen, hulking, dumb, generic enemies with big weapons and murderous intent. After the Legendary Hero (who looks an awful lot like Link) is mortally wounded in the game’s opening scene, he entrusts Rise with Shine. A smart-mouthed talking gun that provides infinite respawns, Shine is the key to saving Gamearth. Rise and Shine must battle their way through hordes of enemies to find the powers necessary to save the day.

Odds are that you’re coming to Rise & Shine for fast-paced action. If that’s the case, then you’re in the right place. You’ll fight your way through linear 2D levels armed with traditional and electric bullets. as well as three types of ammunition: standard bullets, remote-controlled bullets, and projectile grenades. You’ll use these armaments to mow down mechanical enemies (and the occasional toxic sludge-firing bat), and also solve puzzles along the way. Most puzzles are dexterity challenges like guiding RC bullets through enemies, or lobbing a projectile grenade above a shield-wielding foe. They usually won’t do much to slow your progress, and after the first playthrough they won’t provide much challenge or interference.

The game shines brightest (sorry, couldn’t resist) when guns are blazing, though. Shine has a limited, yet expandable clip and unlimited ammo, which means fighting through often means unloading hailstorms of bullets fast as possible. Targeting is free aim, and worked well with an Xbox 360 controller. Most enemies fire energy bolts that you can counter with bullets of your own, making combat a balancing act between taking cover, shooting through incoming bullets, and taking out your targets. 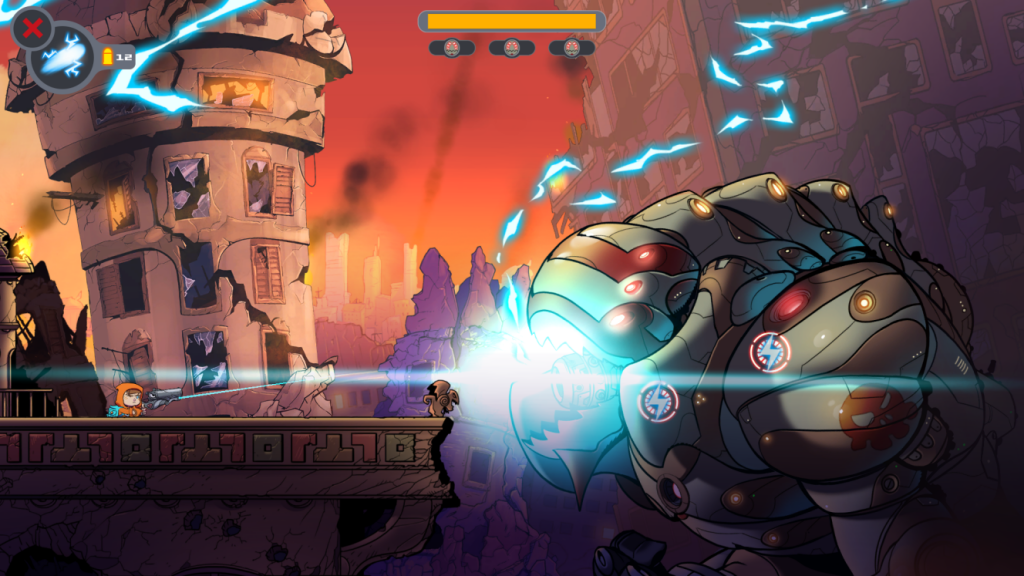 Even at its most frustrating it never feels overwhelming: each level prepares your for the challenge of the next, all the way to the absurdly-long sequence in the game’s last level. After multiple failures, I started to memorize entry patterns, strategizing there more than any other part of the game. Clearing that sequence was even more satisfying than the final boss battle, and I wish there some way to get more of those tough-as-nails sequences after the game’s completion. That said, it wasn’t the only place the game left something to be desired.

The game’s story tries to be both light and dark, jumping between random retro-gaming easter eggs and commenting on the violence inflicted on Gamearth (why does the Legendary Hero die while wielding Shine? Because…oh, the Hero just died, we’ll never know). Gorgeously-drawn, comic book-style cutscenes paint the pictures between action sequences, but they don’t provide much depth. Though I laughed at a couple of the gaming references, largely I felt like they tied the game down: instead of creating a real story, Rise & Shine relies too heavily on nostalgia to make a connection. This makes Shine’s character feel snarky for no reason, while Rise has heart and emotion, but out-of-place in Gamearth’s campy setting.

For example, one cutscene makes a mention of Rise needing a gas mask to go through a level attacked by chemical weapons. That level starts with grunt troops bantering about why they just happen to be standing next to a giant stack of explosive barrels of chemical weapons. Of course, Rise blows them to pieces without a moment’s hesitation, and continues to do so even after commenting on how painful dying and respawning infinitely is (Shine then calls him a crybaby). Rise & Shine never chooses to either wholly buy in to using lampooning gaming tropes or trying to subvert them, and the narrative falls flat as a result all the way through the ending. 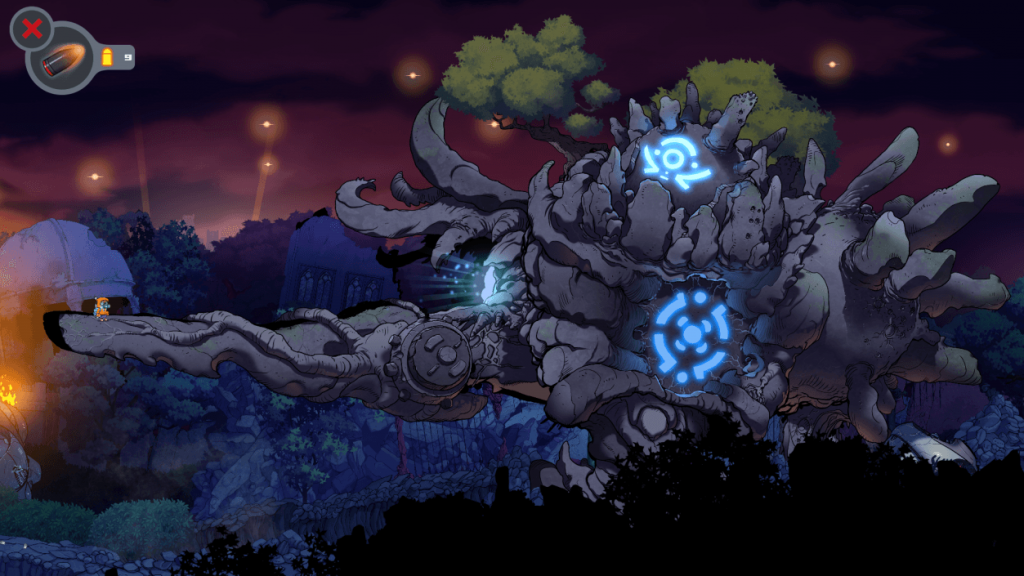 Some gameplay shortcoming keep the game from reaching its full potential as well. I’d have loved to see more weapons or enemy types, or just more of the puzzle/battle fusion boss fights. Once the game is cleared though, there’s only Ironman mode to look forward to: the same game, but the game kicks you back to the main menu if you die. It’s a good idea poorly executed, forcing you to see the same cutscenes repeatedly.

Honestly, Rise & Shine is a game that’s crying out for a speedrun, but it’s just not optimized for it. Short game length, consistent enemy spawn patterns, and reflex-challenging puzzles make it seem like a perfect fit. I’d love to see a future patch introduce formal speedrun tools: a time clock for both normal and Ironman gameplay, stage-select time trials, a mode that skips all non-essential dialog and cutscenes automatically, leaderboards, even ghosts from other players. I can easily see pros running through this game in a half-hour, and I hope the developers make additions to support that.

Overall, Rise & Shine isn’t perfect, but it’s a fun addition to the library of Adult Swim Games action-platformers. Super Awesome Hyper Dimensional Mega Team did a solid job with their first full console/PC release, and I’m looking forward to what they do next. If you’re looking for a hardcore-focused gunfest, this could be right up your alley.