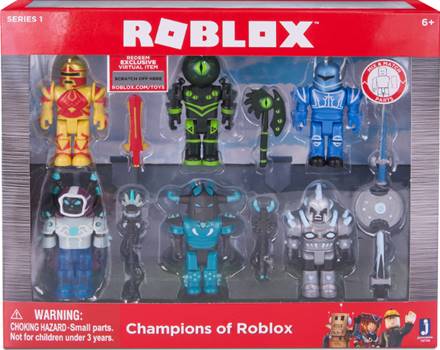 Roblox Corporation was excited to announce the debut of an all-new toy line from Jazwares, which is inspired by some of the most popular games, characters, and developers in Roblox’s user-generated universe. This marks the company’s first foray into merchandising, as well as quite a major entrance into retail, coming at a time when Roblox has posted its highest monthly player count (44 million as of December), as well as coinciding with the launch of a new corporate website.

Roblox is seeking to “Power Imagination” in the same way they inspire participants in their online platform with the launch of these new toys. Fans can take apart the characters in the toy line and mix and match parts to create new characters just as they can in the online world. Those who play online as well can also obtain unique codes which come with the toys and can be redeemed for exclusive virtual items.

The first series of toys is set to debut in February.

David Baszucki, CEO and co-founder of Roblox, stated, ” David Baszucki, said, “Over the past 10 years, we have helped power the imagination of over 44 million Roblox fans across the globe.  There’s never been a better time to expand the Roblox brand with new product lines and experiences that will continue inspiring generations of creators. In partnership with Jazwares, we’ll be providing our very first offline touchpoint to allow fans to interact with Roblox beyond the screen.”

“Roblox has such a passionate user community which provides an enormous opportunity for us to help the brand extend the excitement of the virtual world into the physical world,” said Laura Zebersky, Chief Commercial Officer at Jazwares. “Together, we have developed a diversified toy line that not only embraces the uniqueness of their user generated community, but will surely thrill their community of players.”

Those attending the Toy Fair at the Jacob K. Javits Convention Center from February 18 to February 21 can check out the full lineup at booth #773.

What are your thoughts on the entrance to merchandising?