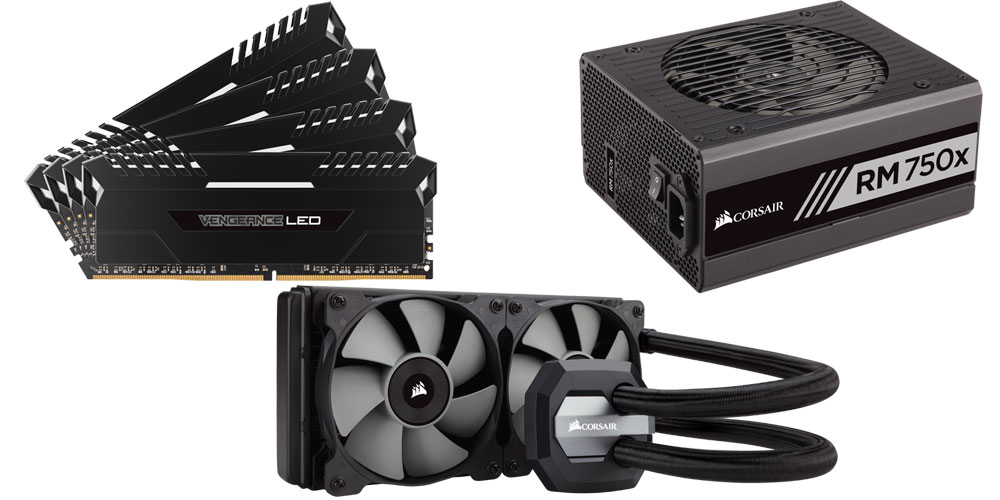 CORSAIR was excited to announce that they are ready for the new seventh Generation Intel Core processors and Intel 200 series motherboards thanks to full compatibility CORSAIR Performance DDR4, the award-winning Hydro Series liquid CPU coolers, and their wide-reaching compatibility on their quiet and efficient CORSAIR PSUs.

The DDR4 features performance frequencies skyrocketing beyond 4,000MHz, as well as kit densities of up to 64GB. This includes the CORSAIR Dominator Platinum, Vengeance LED, and Vengeance LPX DDR4, which are built to make your custom builds look like one of a kind and also built for overclocking. All of their current dual-channel DDR4 kits feature full compatibility with both the new seventh Generation Intel Core Processors and the new Intel 200 Series Chipset.

In terms of liquid CPU coolers, CORSAIR boasts the Hydro series, which helps ensure that the CPU runs cool and quiet while also overclocking the potential. Every one of the Hydro series liquid coolers are fully compatible with the LlGA 1151 socket so that fitting and compatibility are worries of the past.

They also boast the widest range of enthusiast power supplies, and their current line-up is also compatible with the latest Intel CPUs and 200-series chipset motherboards, providing the dedicated DC-to-DC power required to support the chipset’s low-power sleep states. These include the 80 PLUS Titanium AX1500i, the 80 Plus Bronze CX-M, and every AXi, AX, HXi, RMi, RMx, SF, CS, and CX-M also featuring full compatibility.

Are you as prepared as CORSAIR appears to be?