Review | The Walking Dead: The Telltale Series – A New Frontier: Episode 1 and 2

It’s been over two years since Telltale Games left fans in suspense on what would happen next in their critically acclaimed The Walking Dead series. Within that time, they’ve had a chance to experience telling multiple stories across different universes, utilizing characters that they’ve created themselves as well as iconic heroes like Batman. They’ve also managed to improve their visual quality by using a newly upgraded engine. Now that The Walking Dead: The Telltale Series – A New Frontier has finally released, fans can experience the fruits of their labor. Readers be warned, as there will be major spoilers from the first two seasons of the series as well as minor spoilers from the new season. 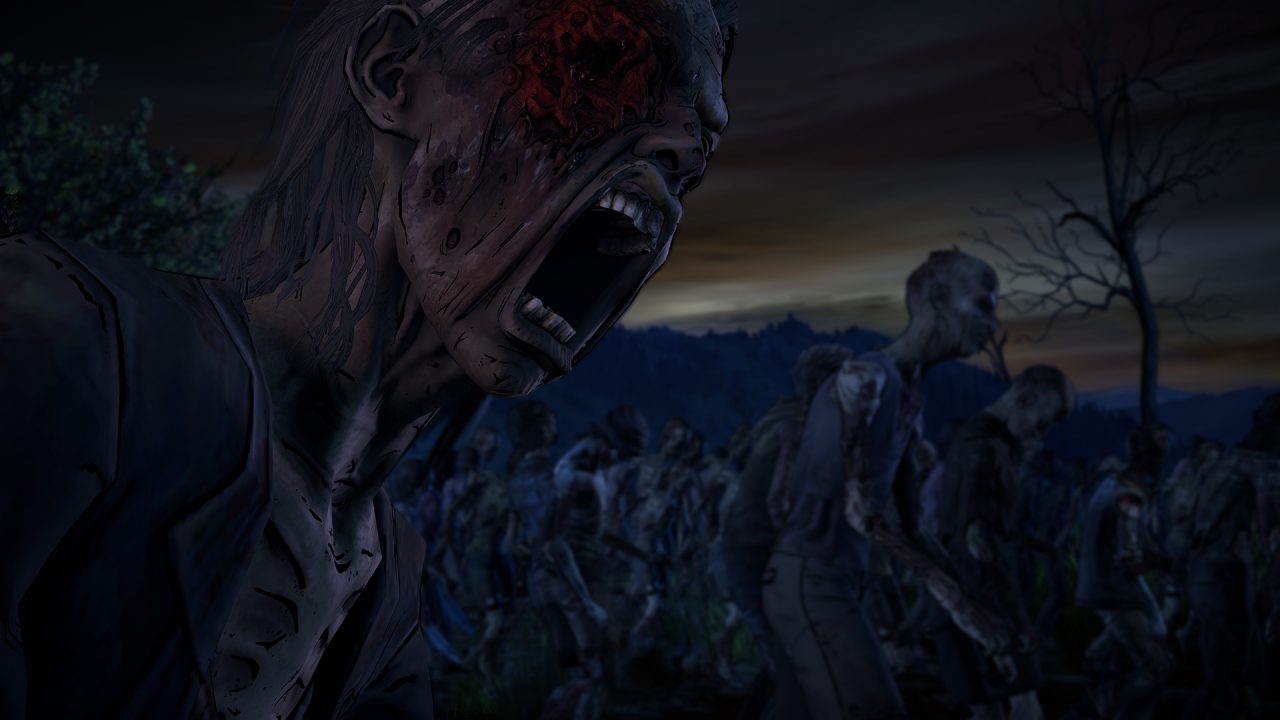 The first two episodes of the season were released together as The Ties That Bind Part I & II, making for an extra special premiere for fans. Not to cater only to fans, this season was made to appeal to newcomers as well, giving brand new options that have never been used in a Telltale game before. Using a Telltale account, fans can import their previous save files from whatever platform they played on previously for season two. If it happens to be from the same platform, it will still automatically detect and allow players to continue their story. If there is no progress from previous seasons, players will have the option to either start a new story with the default setup of the story, or they can create a summary of the first two seasons to apply their important choices to the new season. This creates a lot of replay value as fans would no longer have to start from the beginning of the series to make new choices for season three.

The choices players can make in the summary of the first two seasons are simple, yet they can make quite the difference in the way the story plays out, or even the performances of some of the characters. Telltale ended the second season with a lot of variances, so it was hard to think of how they would continue to tell this story. Luckily, they managed to find a great solution by giving the series a new perspective. Unlike the previous season, which followed the story of Clementine, A New Frontier starts with Javier Garcia, an ex-baseball player with a seemingly good head on his shoulders. How his actions are carried out are based on the player, but Javier makes a great new protagonist for the series. His family plays a vital role in this season as well, giving players a preexisting bond to work with when interacting with other characters. 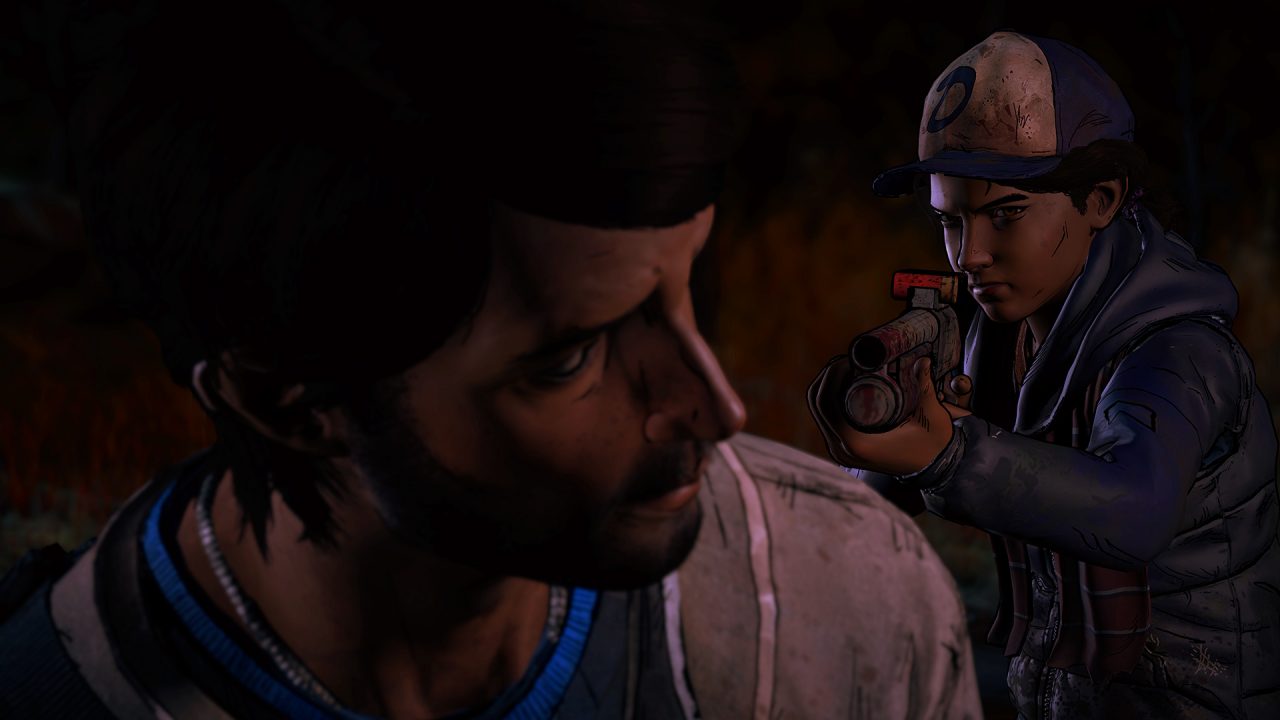 Obviously, Clementine is still a key part of this series, so it makes sense that Javier would cross paths with her as we witness a slightly older, more mature version of the fan favorite character. Even though Javier is the main protagonist, the game uses moments in each episode to focus on Clementine’s past, giving players a chance to see what took place between the two seasons. This is a mechanic that the previous two seasons didn’t use, as now players can not only view flashback sequences, but also play through them and make the choices that determine outcomes in the present day. These flashbacks give fans a chance to see just what happened after their final choices in season two, which depending on said choices, can lead to a very emotional outcome. Whatever the circumstance, all choices leave a different permanent mark on Clementine that adds to the character we’ve grown so close to over the past two seasons.

The gameplay of A New Frontier doesn’t stray far from the previous games, still playing like a point and click adventure game with various quick-time events in between. The only new element of the gameplay is the added complexity to the quick-time events, as there were a couple moments where multiple button presses were requested in a sequence (separate from button mashing segments). While it may not be anything revolutionary, the gameplay still remains tried and true for fans of the adventure genre. One thing worth noting is that certain sections are made artificially longer as a lot of exploration in this game is entirely optional. If a player knows where to go, they can easily ignore certain points of interest or conversations without consequence as scenes will play out very much the same regardless. While it may be better to explore every nook and cranny, this is actually a good thing for players that want to try different options with their choices to see various parts later in the episode. 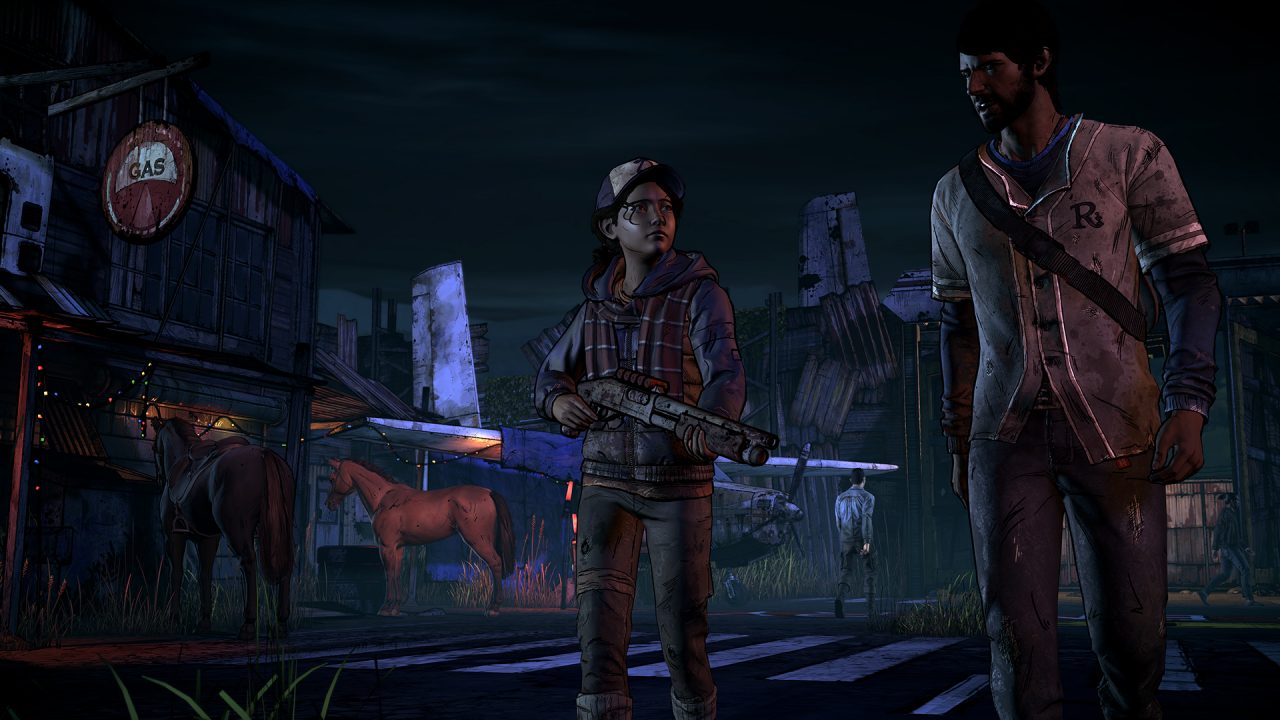 Visually, A New Frontier is easily Telltale’s most beautiful adventure game, with more vivid details showing while still maintaining that signature comic book style. The bold lines and rough look to the textures shows signs of wear, on both the environments as well as the characters. The lighting does well to set the mood and the field of view allows for a more cinematic feeling when objects or backgrounds are put into focus. Unlike Batman: The Telltale Series, this game doesn’t use letterboxes, so the entire screen is used to display the visuals beautifully. It’s also worth noting that this is easily the smoothest Telltale game experience to date, as the engine seemed much more optimized, with little to no frame rate issues at all. Hopefully they can maintain this level of quality throughout the rest of the season.

The game has a very somber score that grows more active when it gets to more intense moments. Many of the tracks will sound familiar to fans of the first two seasons, which makes sense since Telltale uses the same composer for most of their games, Jared Emerson-Johnson. He does a great job with setting the tone of the games when they need it and it continues to work well with this series. That being said, the vocal songs that were used in the credits sequences from the last season are notably absent. This is disappointing since they were beautiful songs that also helped to set a certain mood for the results of the player’s actions. It seems this season has opted to use the same track for the credits of both episodes, which is unfortunate, but at least it’s more consistent with the rest of the music in the game. 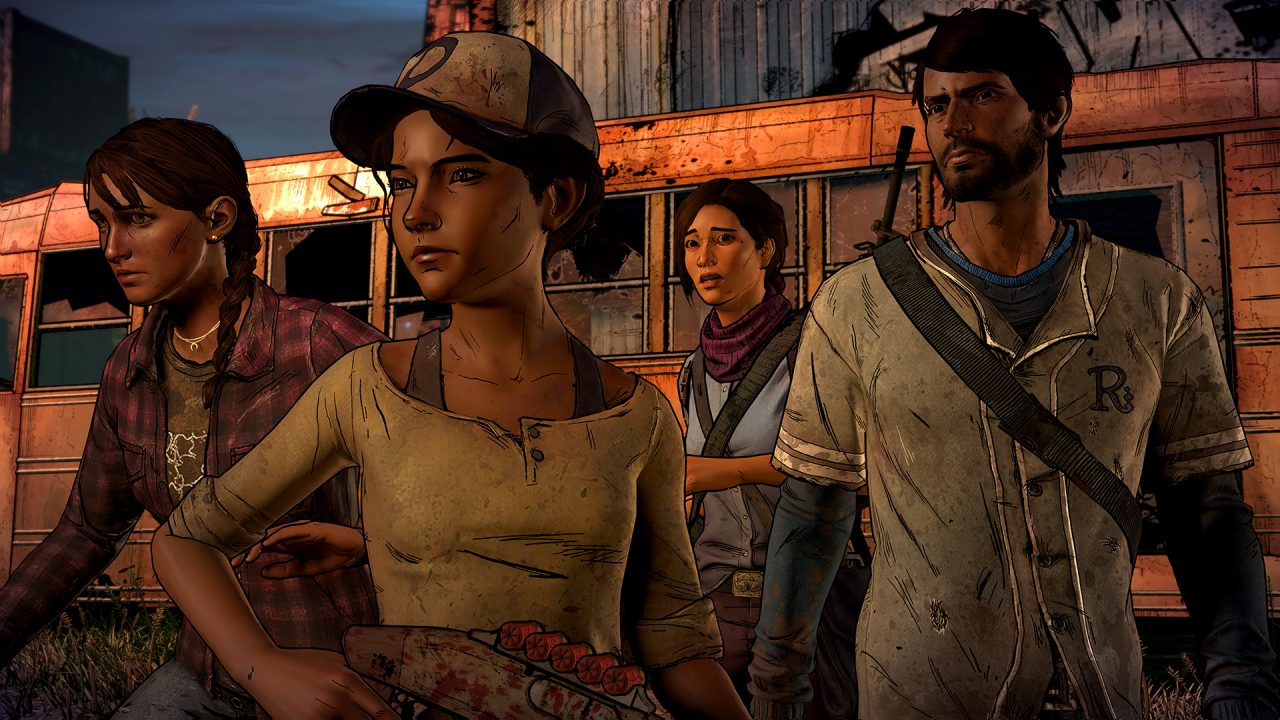 Jeff Schine voices Javier with a fine enough performance, providing a believable level of emotion for his scenes. It is unclear if he is Hispanic in any way, though he does a good job providing the Spanish dialogue as well, which is all we can really ask for. Melissa Hutchison returns to give Clementine a voice of a hardened survivor that has struggled with pain and loss. She does well to strike a tone of intimidation but also fear, as Clementine is still a young girl, though you wouldn’t know it based on her actions. The rest of the cast does well enough except for one voice that just seems like an odd fit, as one of Javier’s family members doesn’t quite sound Hispanic in any way outside of speaking Spanish in a couple moments. It is a minor issue but one that was definitely noticed.

Both episodes of the premiere have many memorable moments, though the episodes feel a bit shorter overall compared to previous seasons. One of the more important scenes plays a little predictably, which is unfortunate, but it still does a good job to impact the characters in their story. There are a lot of cool parallels to the comics and television series as well in this season, as some groups of characters can easily be compared to others that fans are familiar with. One character in particular stands out, being the first character since season one to be an existing character from the other forms of media. To keep light on the spoilers, the identity won’t be revealed, but the character does have a cool set of scenes before the ending of the second episode. 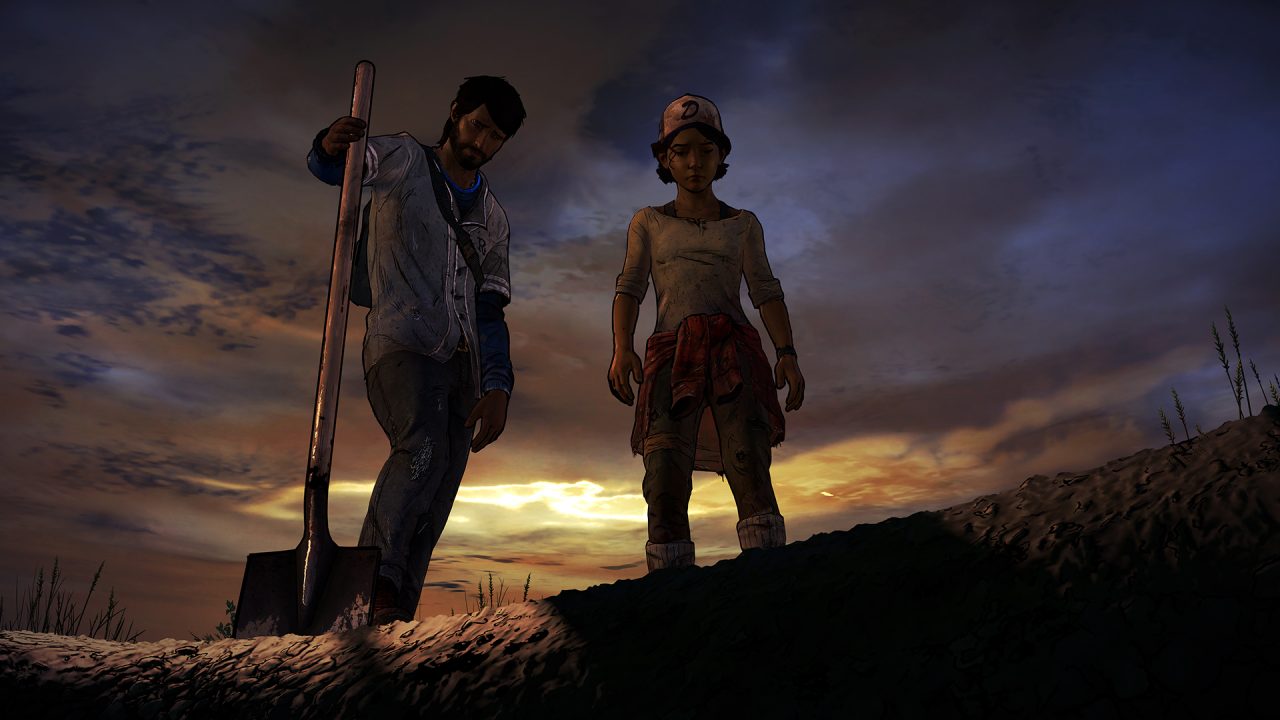 The ending of the second episode does a great job to provide a twist, and it makes the wait for the next episode a lot more difficult. It feels different to be given such a large helping of the game at once for the premiere, but it makes the episodic structure that much more effective as players were given a chance to really get used to Javier. It was a smart move by Telltale, and though the season has just begun, the story is already ramping up to more exciting reveals. It will keep fans speculating as to who else could show up and what else might happen, making us grip our seats in anticipation. As we move into a new year, The Walking Dead: The Telltale Series – A New Frontier takes players in a new direction of fantastic storytelling, made only possible by the passionate team at Telltale. Let’s hope they can continue to keep this story engaging as new episodes release.