Local multiplayer never quite feels the same online as it does in-person: all the energy of the game feels amped up when you’re playing next to real people. Ghost Town Games’ Overcooked captures that energy and throws it into a fast-paced, hectic restaurant kitchen: you and up to three other friends work together to make meals while avoiding pests and navigating the chaos of tilting pirate ships and restaurant semis. If it sounds crazy, that’s because it is, and the game is best when it’s at its craziest. Though it loses its charm when played single-player, working through the game’s 20+ campaign levels and DLC could keep any group of players asking for seconds.

Overcooked’s premise is simple: you and your team of chefs work together to assemble and serve up orders sent in from a restaurant. Each dish requires a certain amount of prep: for example, tomato soup requires grabbing three tomatoes, chopping them individually on a cutting board, then throwing them into a pot and cooking them. A hamburger requires a bun, turning a slab of meat into a burger patty and cooking it, and possibly adding lettuce/tomato. You don’t need to be a real chef to cook any of Overcooked’s dishes, though: the game’s simple, two-button control scheme means that even the youngest players can work their way through the kitchen. The challenge comes in staying efficient: getting three stars on a level means working together to keep orders cooking, dishes clean, and food running out to the customer. 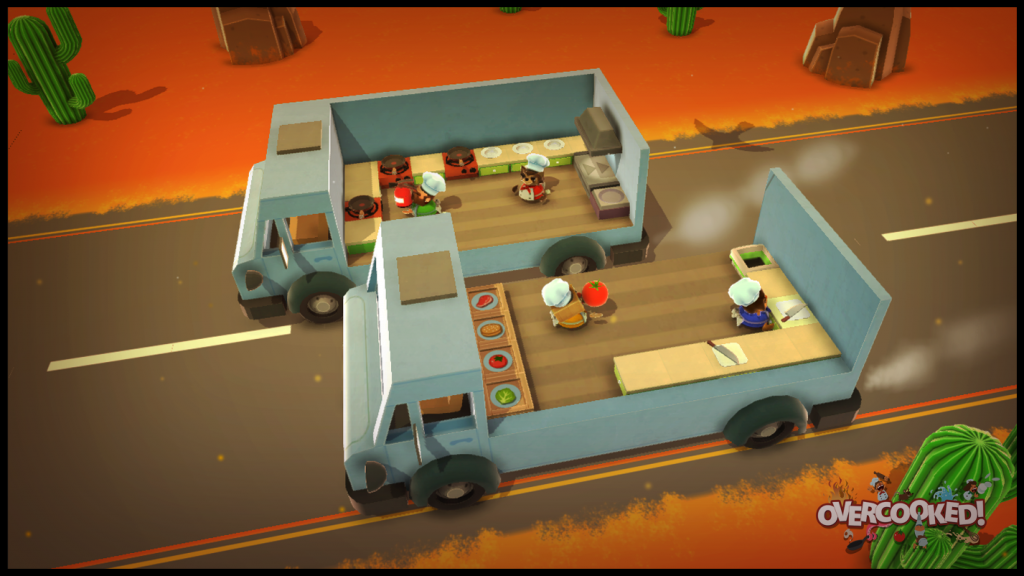 Each level in Overcooked offers a different obstacle, whether it’s a convoluted kitchen layout or complex dishes to assemble. Later levels frequently divide the players into separate spaces, forcing them to hand ingredients back and forth across chasms or via conveyor belts. Communication is key in Overcooked: the sooner you and your partners can get into a rhythm, the faster you can get the meals out, resulting in higher tips. I felt more connected with my friend when coordinating for Overcooked than I have when playing with friends in more traditional co-op games like shooters; all players have to pull their weight for the team to be successful. This might be part of why the game falls apart in single-player: without the coordination of multiple simultaneous players, the dish loses its spice.

In a game all about frantic chefs running around a kitchen to coordinate meals, a single cook running around those kitchens would feel drab and overwhelming. Overcooked attempts to fix this by offering two cooks for the player to work with, hot-swapping between them at-will. This means that the two cooks can’t move simultaneously though, making it much harder to achieve level objectives. The scores required to get stars on each level don’t change based on the number of players, so getting 2 or 3-star ratings without other human players feels pretty impossible.

Single-player also simply drains some of the fun from the game: movement around the kitchen feels formulaic instead of fast-paced and unpredictable. I often felt like I was just standing around, waiting for my chefs to finish chopping vegetables while the clock ticked away. Without some sort of AI controlled-assistant (which seems like it’d be really hard to put together) or netplay, there’s just not a great way to experience Overcooked alone. It’s a game designed for local multiplayer, and it’s hard to recommend playing the game any other way. 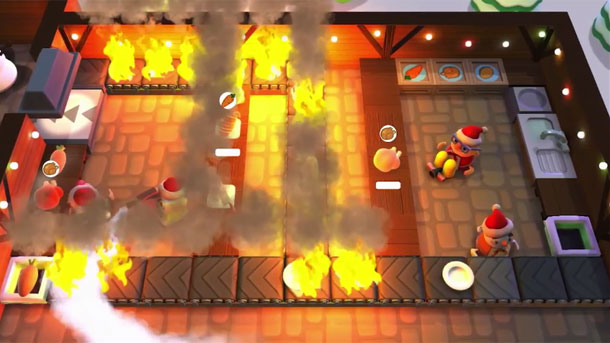 Once you’ve cleared the main campaign, there are two DLC campaigns to work through as well: The Last Morsel, and Festive Seasoning. Festive Seasoning is a free update, while The Last Morsel is a paid DLC campaign, and both supply you with new, challenging levels to navigate and fresh recipes to put together (and a flamethrower). They’re great ways to extend the lifespan of the game, especially considering the game’s big challenge comes from learning how to handle each new layout. Once your team of chefs has mastered a level, there’s not a large incentive to come back.

Overcooked may not be a flawless dish, but it’s an amazing one to share with friends. Some control wonkiness aside with grabbing and setting down items, the mechanics are simple to learn and don’t get in the way of the fun. There’s a wide range of characters to play from various backgrounds, and though there’s no functional difference to each character, it’s great to see diversity in the roster (there’s even a raccoon that gets around in a wheelchair). For families or friends looking for a fresh, accessible challenge for all ages, Overcooked should be the game du jour.